I’ll move away from the T-shirts today with one of the most unique items I brought from Austin, a helmet used in the filming of the FMV cutscenes for Crusader No Regret:- 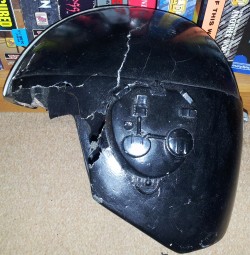 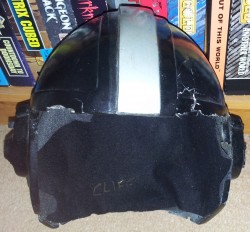 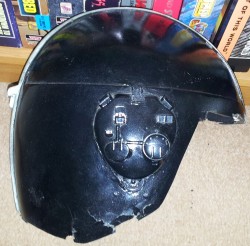 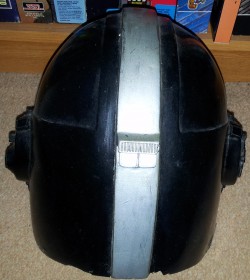 This would have been worn by one of the Lunar Mining Cartel guards that popped up during various sequences. It has Cliff written on the inside which must mean this belonged to Cliff Stevens looking at the credits. I couldn’t identify him to say which particular guard he is in the game but he does have one other acting credit to his name on IMDB playing a salesman in The King about 10 years later which I’ll have to keep an eye out for on TV. It may or may not be the right helmet but I searched through all the screenshots on here and managed to find a couple showing this or it’s identical twin fairly clearly:- 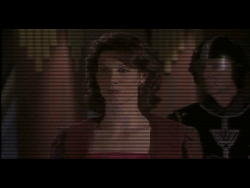 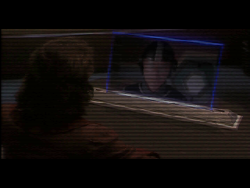 I don’t have the body armour to complete the look I’m sorry to say. It looks like it was worn in conjunction with a pair of safety specs on the screenshots also. Seeing what does survive of this thing in real life, the only way to describe it is cheap which at least partly explains why it’s quite as beat up as it is. The plastic is seriously thin and as such it’s not in the best of condition with tattered edges, a peeling lining and several cracks. I’m guessing that the main helmet was vacuum formed then the other pieces glued on and spray painted.

If you thought the outfits looked dodgy on the FMV believe me it’s worse when you see them up close. There wouldn’t have been any reason to build this to last more than a couple of days of course and the interlaced FMV video of 1996 wasn’t ever going to show a whole lot of detail. Quality aside, this still has to be one of my favourite items in the collection and looks great sat on the shelf.