Clothing week is going into overtime with one final item, an outfit from the FMV scenes in Crusader No Remorse. This would have been worn by one of the people the player got to meet in the rebel base between missions although I couldn’t tell you which one. In the FMV the costumes all had name badges which would have made this a lot easier to narrow down but it’s gone missing which doesn’t help me here. Going on the screenshots from earlier post, I have managed to narrow the candidates down to one (or maybe even both) of the following two characters:- 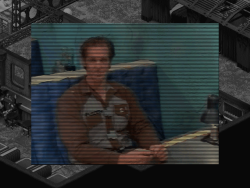 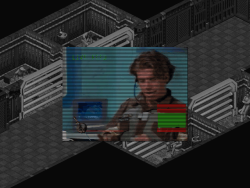 Starting with the jacket, this looks to be entirely custom made but not exactly fully functional. The pockets only have the clasps on the flap with no stud underneath and are instead stuck shut with the aid of a glue gun. The buckles on the front are two blocks of wood that have been carved, glued together, painted then stuck on with a glue gun and are equally unfunctional. There are no fastenings of any sort that work in fact on the whole top. The sleeves are loose with a safety pin holding them slightly together suggesting that the actors were just pinned into their costumes:- 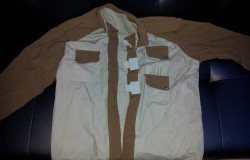 The trousers that go with it are more practical and look to be a modified off-the-shelf pair with some added padding and pocket flaps. There is a section on one of the legs which probably isn’t all that visible in the photo with two slight holes + a slightly discoloured rectangular area. Something must have been attached there at one point, maybe just an extra pocket. We rarely get to see peoples legs in the No Remorse FMV from what I remember:- 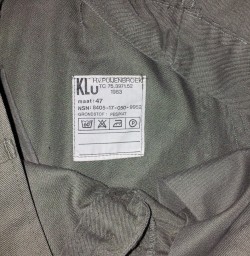 Finally, I found a curious looking RSVP card to Michelle Caddel (Richard Garriott’s PA) in one of the pockets:-

That’s more than enough photo’s of clothing now that I’ve finally got round to the item that started me on them. The plan (which may change) is to have a go at Ultima 4 on the NES next.