Back around the mid 90’s, Origin took to using “standee” advertisements in stores to plug their latest and greatest. These were 3 of these that I’m aware of for Wing Comander 4, Bioforge and also Crusader – No Remorse. I own one of the Bioforge ones which I’ve stuck up on a wall rather than standing it up and I’ve quite fancied the idea of reuniting with it’s compatriots for some time. The odds are against me though, especially given as these things were primarily used in the USA. Even if I did ever find one, I really, really don’t want to ship it over.

So instead I thought I’d have a go at making my own. Echo Sector has long held an archive of Crusader CD’s one of which contains the original files used to create these things. The naming format used in the files on these CD’s wasn’t entirely helpful. They are all TGA09, TGA10, etc. for the versions on the CD. They aren’t actually TGA files though and are really PSD (Paintshop Pro) format. Once figured out, I fed it into an online convertor and got out a nice crisp JPG. The artwork is surprisingly basic on this actually with no real background other than a cityscape + a great big explosion.

I had a bit of a look around online for someone to print this. I thought to try the local printers initially, then got a quote of £200 and quickly changed my mind. Instead I went to mycutouts.co.uk who blow up family photos to life size for birthdays and the like which is near enough what I was after. They were keen enough to take the job and at 1/4 of the price. 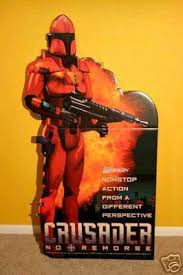 There is also the issue of where to cut the image as it’s not all that obvious. There were some files on the CD that looked to deal with this but they weren’t in any format I could use. So instead the cut is based on the low-res image above taken from wcnews back when an original standee was auctioned off many years ago. 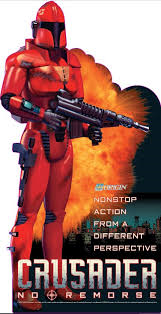 I sent all this through to the printers and got this proof back. In hindsight the cut is slightly different around the bottom left but it’s close enough for me anyway. 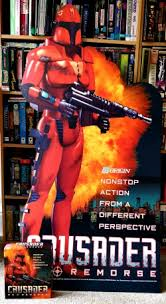 And about a week later the real thing has arrived. I was worried that with modern printing, the pixels could be too obvious on this but it looks great. I would say that in real life the colours aren’t quite as deep as they could be so the original would be slightly nicer. No doubt if I’d gone for the £200 option it would be perfect but this will still look fantastic on the wall somewhere. I haven’t as of yet figured out where but it will find a home somewhere in here. Now if I can just track down that Mark Hamill Wing Commander cutout, I’ll have the set…