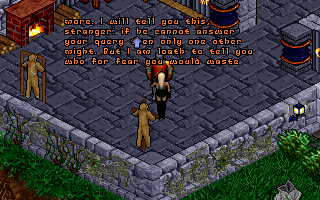 My first job would appear to be exploring the town. I’m told that its called Tenebrae by a guard and that its divided into 3 areas of poor, rich and the palace. Walking around gives me a better look at the graphics. They are definitely nice but possibly a bit too colourful and the placing of tiles is very obvious. Something else I’ve noticed is that the avatar appears to have a black border around him which doesn’t help to make him appear to be part of the world. It all looks a bit fake and plastic giving the impression that the world and everything in it is a model.

You could argue thats an improvement over the cartoonish U7 graphics. I’m split as to whether its an improvement. I do feel a little too close in for my liking – an SVGA mode would be nice. The town is divided into small blocks also which load when you reach the edge of another – I prefer a continuous world although its a minor point.

I head for the poor area of town first looking for the tavern which I never managed to find. I run into the executioner from the docks who suggests I should talk to the librarian and failing that a mysterious mage living outside of the town. The conversation is a little different from U7 in that I get to choose whole sentences now instead of a single keyword. This is a big improvement – it makes the conversation a lot easier to follow. In U7 I was just picking all the options without even knowing why they were on the list half the time and this just makes more sense. The downside is that putting words in the avatars mouth as such personifies him and its supposed to be you thats playing the game. 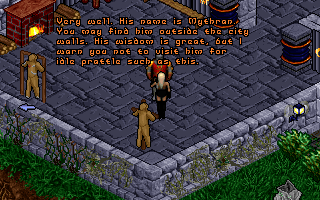 I get the name of the mage (Mythran) out of the executioner. I’ll have to track him down later I’m sure. She is reluctant to tell me about him and I have to swear not to bother him without good cause. 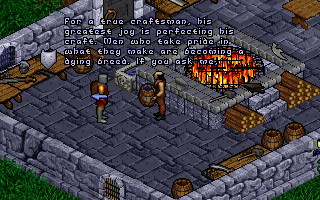 I find a blacksmiths – if I had any money I’d buy a weapon but I’m starting the game with absolutely nothing. He is quite proud of his profession and doing a good job but does hark back to things being better in the past (without getting too specific). I’m starting to learn a little more about the gods no. The woman at the docks ordering the execution is known as “The Tempest” and is effectively head priestess to the water god. The god gives her some power in return allowing the weather to be controlled and guarantee good crops. She has got a little overzealous these days and such executions for blasphemy are not uncommon. 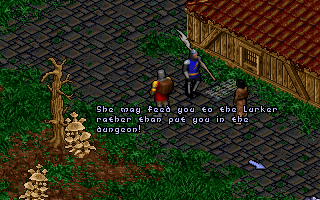 Indeed walking around town, I see quite a few guards harrassing the peasants for not paying taxes and the like. The rule here looks somewhat oppressive. 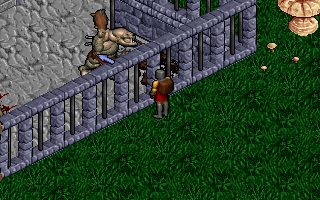 There are some strange structures around town including a caged troll who makes the ground shake when he walks. Like everything else huge creatures like this are smoothly animated. 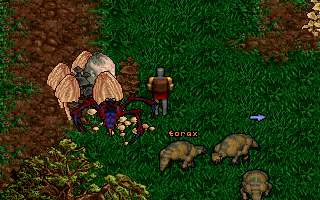 I accidently wander out of the northern end of town and into a farming area complete with some very strange herds of animals. They look nasty but don’t actually attack me. 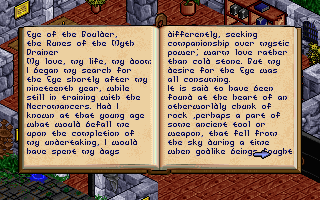 I’ve not done exploring town yet so I head back in and find the library on the east side. The books here are readable in the same manner as Ultima 7. 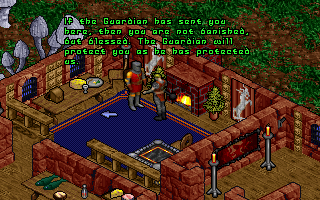 I don’t find the librarian but do locate another resident in his house. He wants to know how I got here and I risk telling him the guardian banished me here. The guardian is held in high regard and he says the he must have been blessing me. 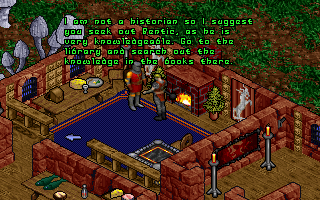 He also tells me to talk to the librarian. 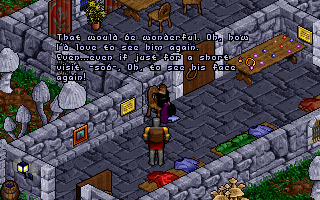 Before I find the librarian, I run into the woman whos husband just got his head chopped off on the docks. Not only has she lost her husband but her son has left to become a theuragist (almost definitely mispelt). This means that he studies under the air god and becomes a healer. It appears that the 4 gods have 4 schools in effect and an associated magic for each one. I say that I’ll ask him to visit if I see her son. 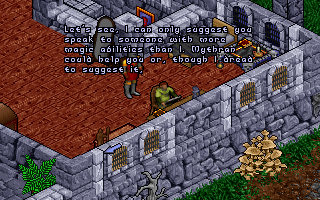 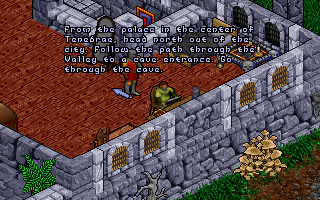 I go back to the library and this time find the librarian a floor up. He doesn’t know anything about getting me home but also points me towards Mythran and even gives me directions. That has to be the next place to go but I still haven’t looked at the palace. 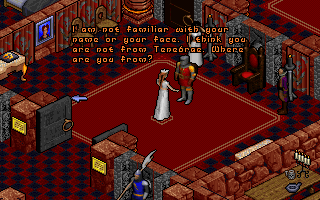 The palace turns out to be a bit smaller than I expected and is mainly given over to rooms for the palace guard. The tempest is in her throne room but won’t talk to me until I tell her where I am from. I get a choice of four options and I try them all but none of them do the trick so this is a dead end for now. 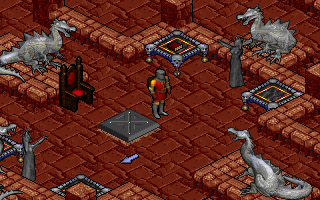 On the next floor up I find some sort of strange plate which rises and lights up when I walk near it. I have no idea what this is about for now but it looks important – probably some sort of teleportation device for speeding around the world.

I only played for about another hour to get this far – I’ve explored most of the town now it appears, although I’m sure I missed a few buildings out. It’s quite a big place but not huge considering that it appears to be the only town in the game. The map for Serpent Isle that comes with the game is a bit strange – there is just the one city down in the corner and the majority of the island is made up of mountain ranges which look impassable. I’ll be interested to find out how I’m supposed to get to the rest of the island – I suspect some sort of central cave system. Before I get that far I’ll see what this Mythran has to say for himself.