I’ve made a start on Ultima 4. I’ve played through it a few times before and know the game very well. Because of that and the fact its been blogged before, I’ll keep the posts on here short and just play through it as quick as I can. The last time was a couple of years back so I don’t remember everything at least. 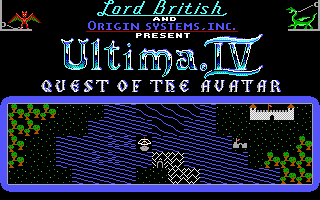 So far, I’ve just been exploring a few of the towns, talking to everyone and attempting to gather runes, companions and raise my virtues. I’ve explored Britain, Jhelon, Paws & Trinsic. The mechanics of the game are very similar to Ultima 3. The major new addition is the conversation system. This takes simple one word input to allow some interaction with the people in towns. People don’t have a huge amount to say (except LB) but it still adds a lot to the game. 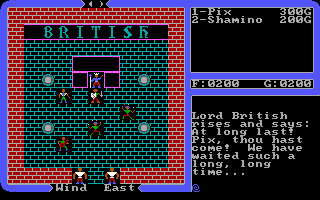 The DOS version which I’m playing gets EGA graphics this time round and looks a lot better for it. I did consider playing the master system version but then I remembered that you can import your character into ultima 5 and 6 if you play through on the one platform. This does mean that I have to play Ultima 5 instead of Lazarus as I originally intended, but I would feel I would be missing out a game if I played Lazarus which would bug me a bit if I’d played all of Origins games except one. I decided not to use any of the upgrade patches – I like the music in Ultima 4 but there isn’t that much of it, so you end up listening to it hundreds of times in a game this size. I’d rather supply my own soundtrack. 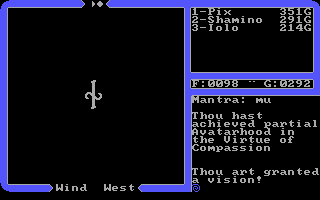 So far I’m a partial avatar in compassion and ready to advance in humility. I’ve gathered 3 companions and am up to Level 5. The way I remember this game, its not too hard getting all the virtues. The difficult bit was playing through the dungeons and getting the stones.

Even through I’ve barely started it, there is no doubt this game is a classic. The storyline is utterly unique, the scope of the game is epic, the world is enormous and the gameplay is rich and varied.