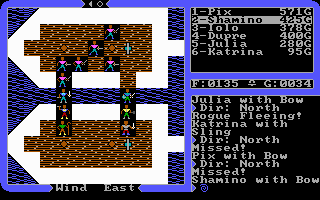 I’ve not had loads of time over the weekend for Ultima 4 but I’ve managed to play a bit each day, with a decent session on Sunday. I’ve still probably spent as long on it now as I did finishing Ultima 3. I’ve made a reasonable amount of progress. I’m now a partial avatar in all eight virtues, I’ve got the black and white stones and have 6 of my 7 companions. I’ve come to the conclusion while playing this, that I’ve never finished this game before without cheating as I really don’t remember it taking this long. I’m definitely not going to cheat on any games for this blog  (apart from walkthroughs and savestates that is).

I’ve spent a fair chunk of my time, raising all my virtues. I know the actions that contribute to this so its been easy enough to speed things up a bit. i.e. I know that paying the blind reagents seller the correct amount of money raises honesty & justice so I just buy 1 sulphurous ash at a time and pay my 2 gp getting a stats boost every time. There are similar actions for pretty much all the virtues so its not too hard to raise them. The world map really is huge though, travelling around takes some time.

I’ve had chronic money shortages throughout the game – this is probably because I’ve formed my party before becoming an avatar. I’ve completely ignored buying armour and outfitted my party with bows. Range weapons seem to be the safest bet – you can kill most things before they even reach you. In fact the combat is surprisingly easy. Controlling 8 characters seems a bit too many – I usually struggle to get all of them involved in the fight. Once becoming a partial avatar in all 8 virtues, I got the mystic armour from empath abbey and my money problems were solved. This sells for 4500 each (you get 8). I outfitted the party with all the best weapons from bucaneers den, maxed out my reagents and went back and got more mystic armour.

One trick I’ve been using during my money shortages is to die deliberately. There are no penalties as such for dying in this game except your food and gold are both reset to 200. So if half your party is dead and you don’t fancy paying 300g each to heal them, you can head for the nearest town, spend all your gold on something or other (you keep all items), wait to starve and your party will all have full health again as well as free gold and food. 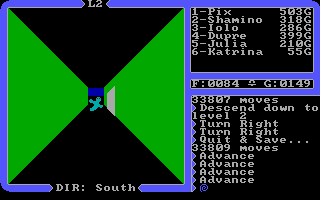 I’ve not done much dungeon delving. I’ve battled through Hythloth, however from the bottom up. The dungeons have gems in them that raise different stats depending on the dungeon. They also hurt when you take them. The stats are based on the virtues of the dungeon, so the Hytholth gems raise all 3 stats by 5 which is a pretty nice bonus. Because of this I played through the dungeon rather than skipping it (although I did use a few level up spells also). The gems killed half my party off but a brief starvation diet got them in shape again.

The dungeon levels seem to be a bit smaller if anything than Ultima 3. However, this time they all have predesigned rooms in them. These rooms are basically combat screens but more complex. Many contain tiles you have to step on to open walls, or traps so that when you go to take a treasure chest some monsters are released. Thought has clearly been put into each of the rooms. For instance, in deceit I found a corridor with tresure chests everywhere. At the far end was a room with a load of thieves sat round a campfire. The graphics are primitive so you have to use your imagination, but this sort of thing adds depth to the game. After 2 weeks of apple 2 graphics, this game is actually looking quite good. Its surprising how quickly you get used to old technology again and it stops being an issue. 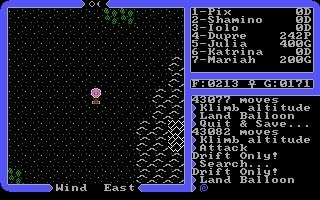 At the end of Hythloth was the hot air balloon. You need this to get one of the stones which is next to an ankh in the middle of a mountain range. The baloon is at the mercy of the winds, so you have no control other than land and take off. Thankfully there is a spell to change wind direction which made the job easier. 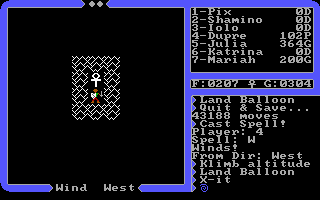 2 of the spell reagents (nightshade and mandrake) are not available for purchase and have to be picked up from individual map squares when there are two new moons. Waiting around for the moons to change is a bit tedious. I collected about 30 of each this way which should be enough for now. 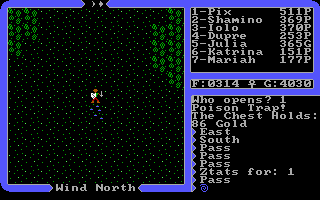 I’m unlikely to get more than 1/2 hour played tonight, but the next job is to go through all 6 dungeons and get the stones.