I decided that I’d try taking Natreg’s advice and using the keyboard controls. They are pretty unwieldy to say the least. ZXCS work along the lines of ASDW in modern games with A & D turning. QWE make me lean around while RFV & TGB are used to change standing height and look up/down. Its a lot of keys to cope with and is not coming naturally so far. A modern FPS would achieve the same with ASDW for moving, QE for leaning, C for crouching and using the mouse to look around – less than half the keys.

The lack of mouse look is definitely reducing the immersion factor for me. The standard mouse look didn’t come in before Quake as it doesn’t make sense in a game that isn’t 100% 3D. It was difficult to get to grips with at the time as well if I remember right but after the amount of QuakeWorld and the like I played a few years back I got extremely adept at this and usualy blast through any FPS in no time. I may get used to the system used here but I don’t think I’ll ever really like it. It does allow me a bit more freedom of movement than mouse alone though. 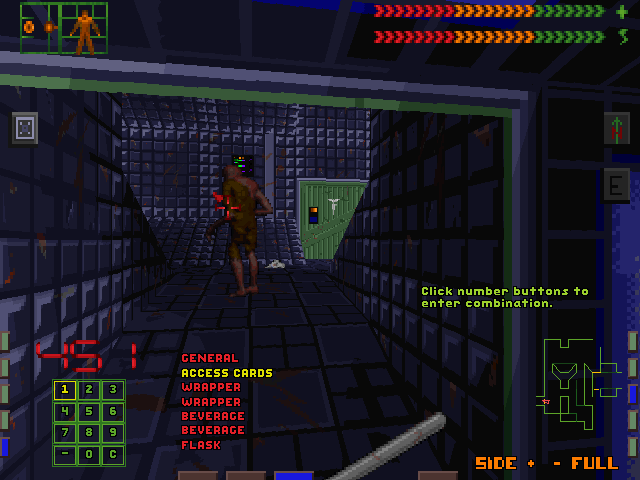 Using the combination from my own log note, I let myself out of the lab. There is some sort of mutant/cyborg just outside. These aren’t any tougher than the security bots. 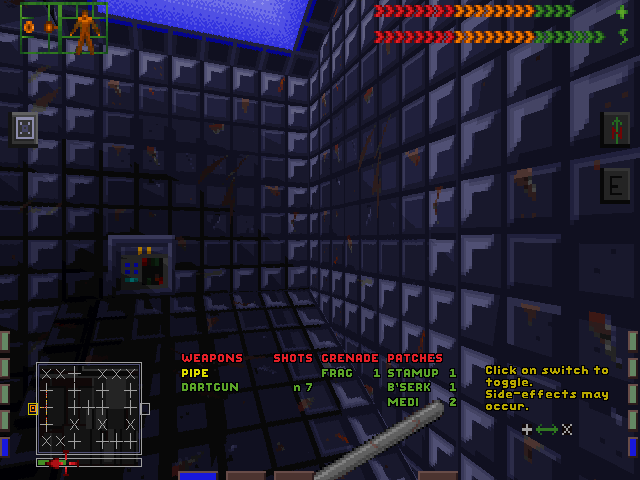 There is a panel outside with a simple puzzle. I have to spin the X’s into +’s to make a circuit. 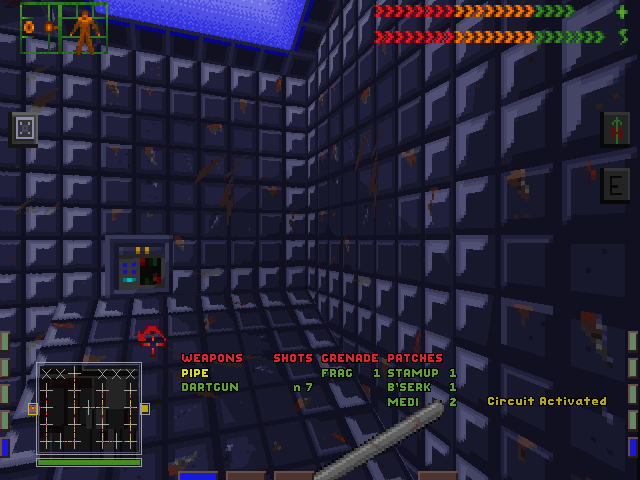 Once joined the lights come on. As far as I can tell I could just flip the lot of them but I’m sure it will be more difficult later in the game. 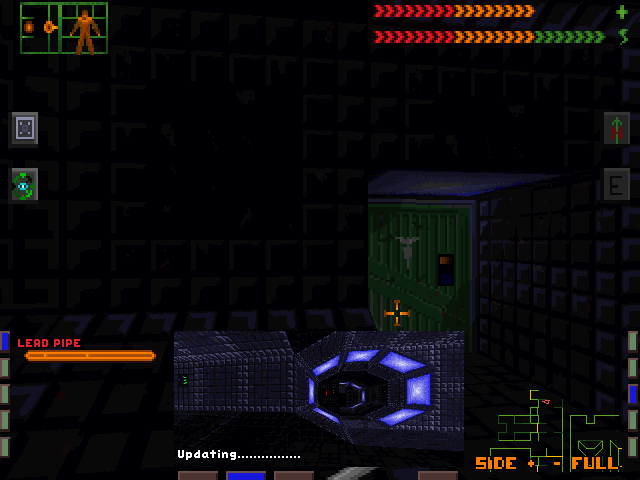 There are upgrades lying around which I pick up. One of them gives me a rear view mirror of sorts. It only updates once every second or two – I’m guessing for performance reasons. This uses up energy and doesn’t seem all that useful to me so I just turn it off again. These sorts of upgrades have the potential to add a bit of depth to the game beyond a straight FPS. I don’t know how many of them I can expect. 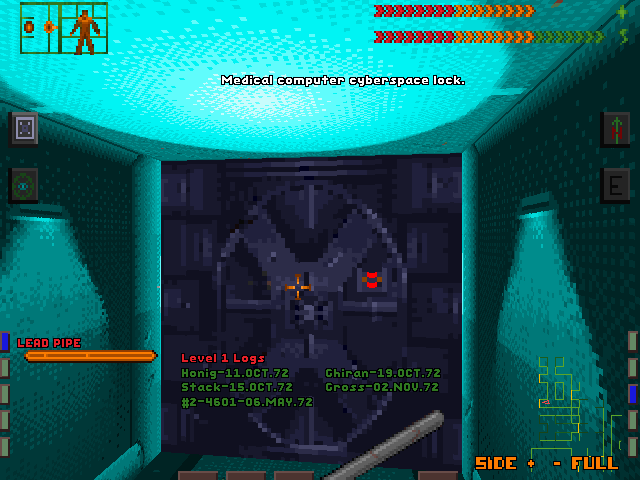 I come across a door that is locked in cyberspace. 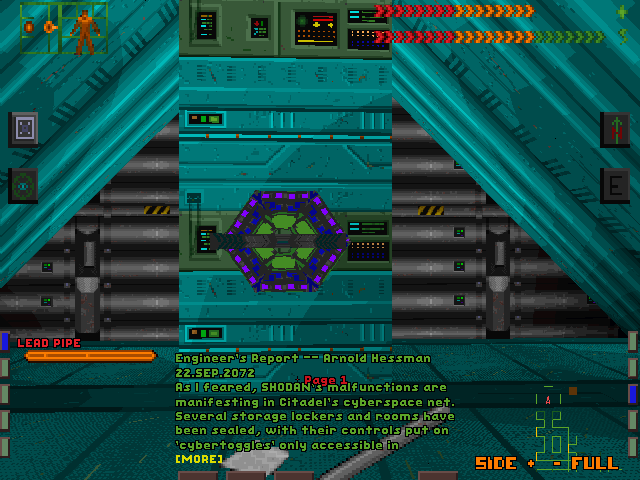 Along with a log setting the scene I find a cyberspace panel, right next door. I need to head into cyberspace (using this panel) to unlock the doors. 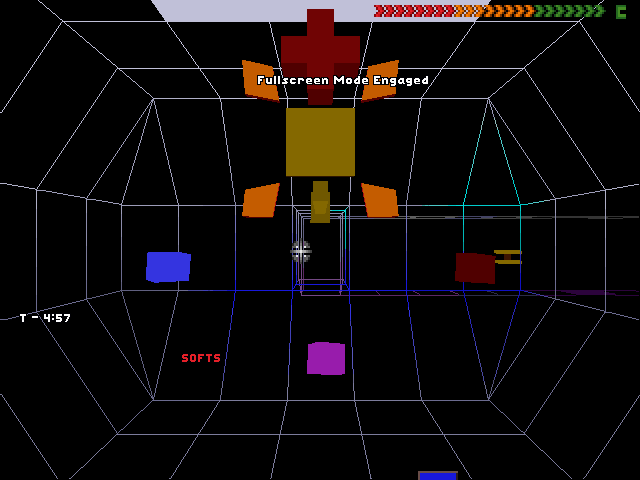 Cyberspace is an odd place. Cyberspace in the mid-90’s was always seen as a load of geometric shapes for some reason and this is no different. The cubes represent software as when I crash into them I get tools I can use in cyberspace like a shield + a pulsar (gun) to fight off security. I float around with a full 3 degrees of movement in the same manner as Descent. 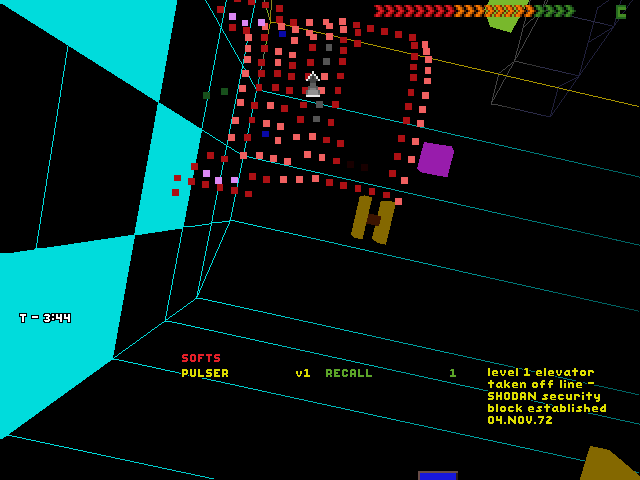 I bump into everything that looks interesting then head out through a tube at the far end of the room. This sort of sucks me through into the next room although I need to steer to avoid the walls. This would be easier if all the walls were not represented just by lines in Akalabeth style.

The next room has security of a sort which I zap with my pulsar. It disipates as I shoot it. 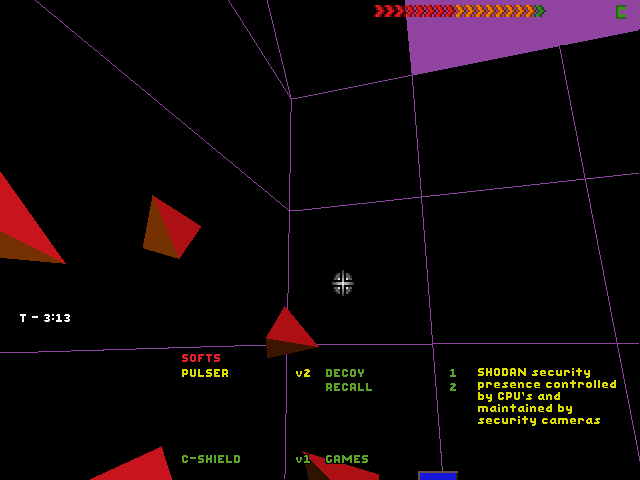 I get sucked into another area, this time with a much tougher disembodied head providing the security. In here I get a pulsar upgrade + crashing into another shape unlocks the door. I exit again by heading through the gate shown above. 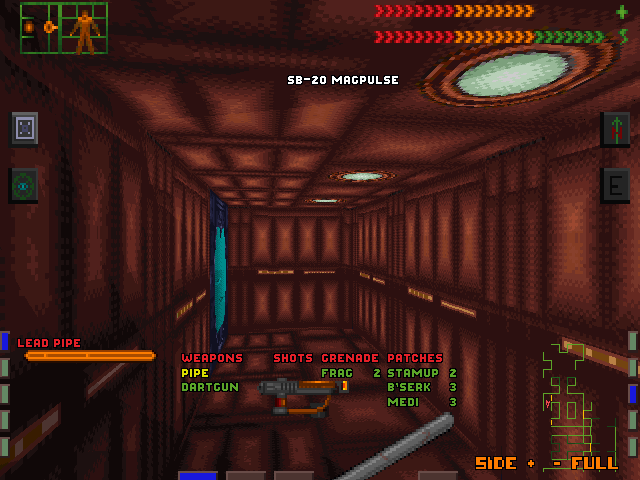 That finishes my first excursion into cyberspace and I’m not sure what to make of it. I think I prefer the regular sections of the game but it is definitely unusual. The previously locked door is now open. 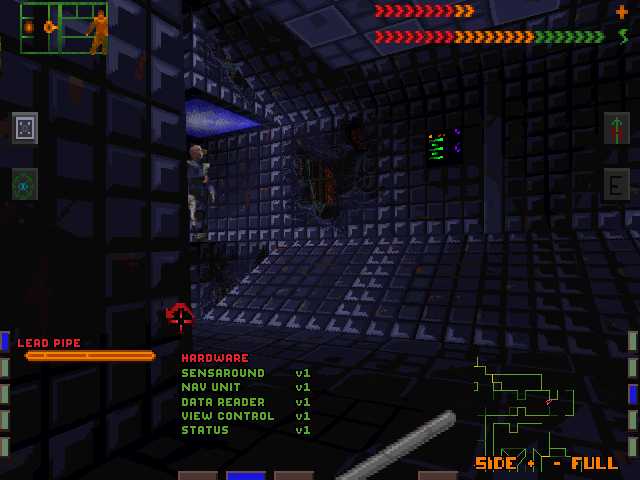 I carry on exploring and run into a new enemy. These guys have guns and are a lot tougher than anything so far. I use my dartgun on this guy while leaning round the corner and can kill him off with impunity. I can aim the dartgun with the mouse – using the keys to move allows me to do this while moving and if I can get used to it should help later in the game. 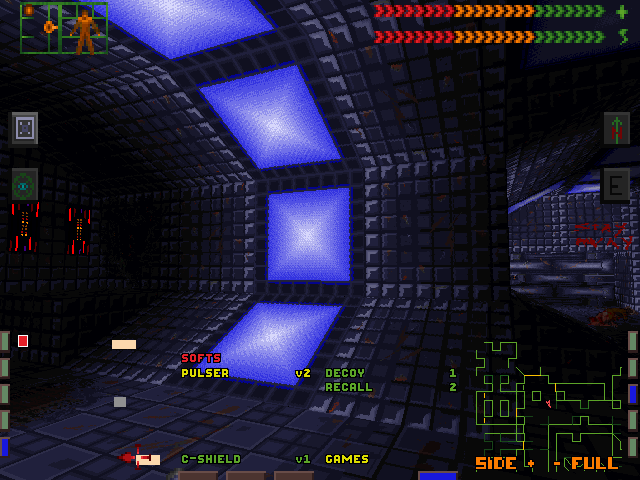 I got some data pods out of cyberspace which I finally take a look at. Along with a few logs I got a pong game which I can play in the bottom left of the screen. 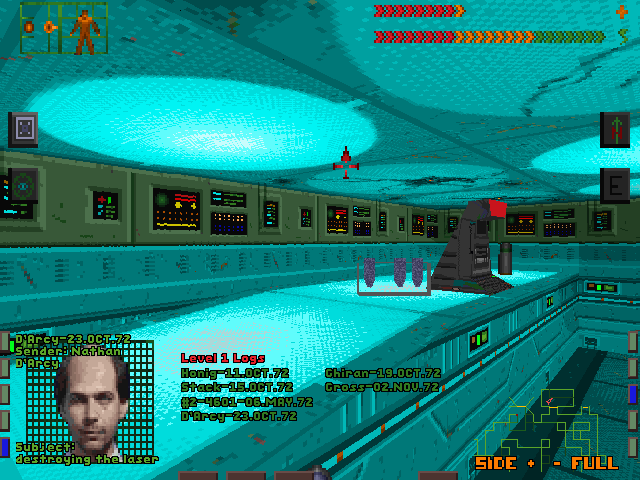 I leave Pong long enough to find D’Arcy’s lab. He isn’t around but I do find a log telling me how to deactivate the laser. I need to go to the science level and activate the shields, then using the laser should turn it on itself. 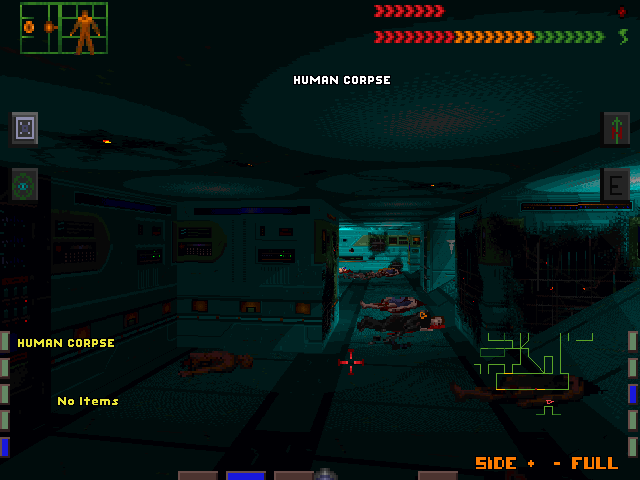 Further searching reveals where all the humans attempted to hold up but its a morgue now.

I’ve still not explored all of this first level although I only spent another hour or so on the game today. It feels as though I’m getting vaguely near seeing it all but I’m only guessing. There are just 10 levels in the game so they need to be a decent size.

I’m liking System Shock so far but the controls are not helping. Its very early days still but I can’t see me loving it as much as Ultima Underworld. The problem here is that I’d struggle to come up with many games that have attempted the same thing as Underworld but System Shock plays like a modern RPG/FPS and suffers by comparison. It is clearly going to be a deeper and more complex game than your average FPS but I’d be surprised if it can beat the likes of Deus Ex with which it shares a lot of similarites.

If I compare it to the likes of Half Life instead which didn’t come out until a few years after this, its going to come out with flying colours. The storyline and gameplay here is far richer but I never did see what the fuss was with Half-Life in the first place.

The truth is I really shouldn’t be judging this until I get a lot further in and I’m still being distracted by Final Fantasy. I’ve got 3 of the 4 crystals lit now and messed about a bit in one of the new dungeons on the PSP version. These new dungeons seem largely pointless so I may just crack on and try to finish the game which I’m guessing won’t take a lot longer as I’ve almost run out of places to explore.