I was finishing off Final Fantasy on Wednesday evening which is why there was no post yesterday. I’m not sure what I was expecting but the ending was a bit of a letdown, just a load of scrolling text which drags on forever saying the same thing in a different way over and over again. I’ve not been that impressed by the game itself. The NES version of this came out in 1987 which is a full 2 years after Ultima 4 and the gameplay just isn’t in the same league. I’d be more likely to compare it to Ultima 1 especially given the whole collect 4 gems and go back in time 2000 years to kill the bad guy plot.

I do like the idea of faithful remakes like this though and the 3D treatment given to FF3 & 4 on the DS is better still. If things had gone differently for Origin, I wonder if we’d be seeing new releases of all the early Ultimas. I suppose it could still happen but I won’t hold my breath.

With FF out of the way, my full attention went back to System Shock again last night finally allowing me to make some decent progress. 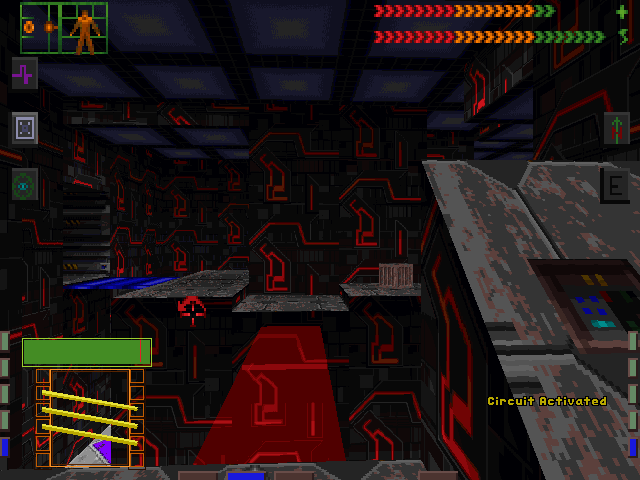 It was back to exploring Level 1. I found some force bridges which can be extended with switches and let me into a new area. 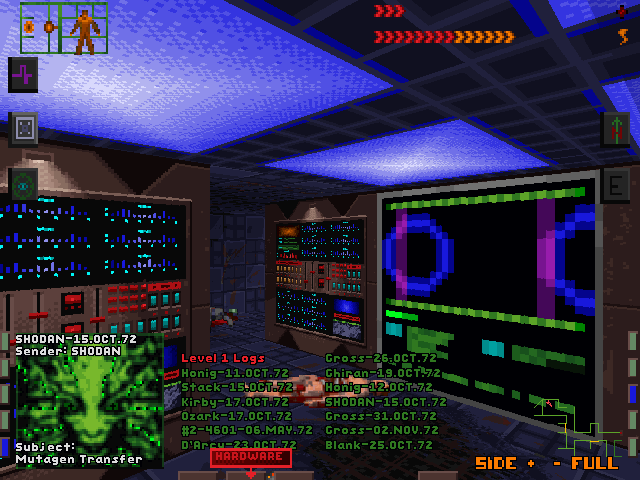 I find a log from Shodan which is lying around. Shodan appears to have gone insane and wants to become a god. To this end she has been working on a virus to send to Earth possibly as a backup plan in case the laser doesn’t kill off enough of us. 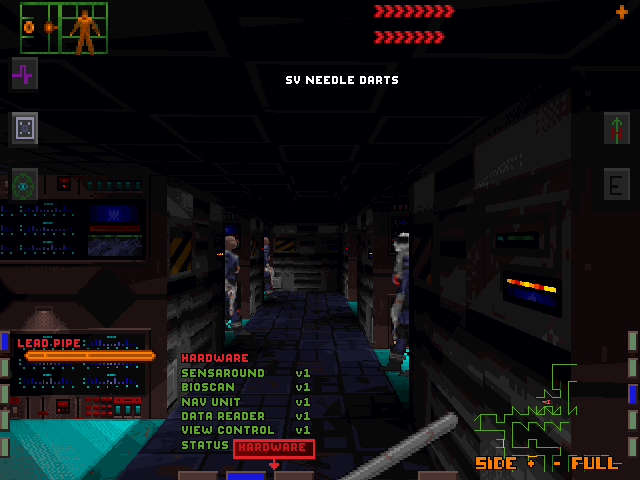 There is an area full of cyborgs in niches, borg style. Most of them don’t move so I just hack at them with my lead pipe to make sure they don’t come back to life later in the game. 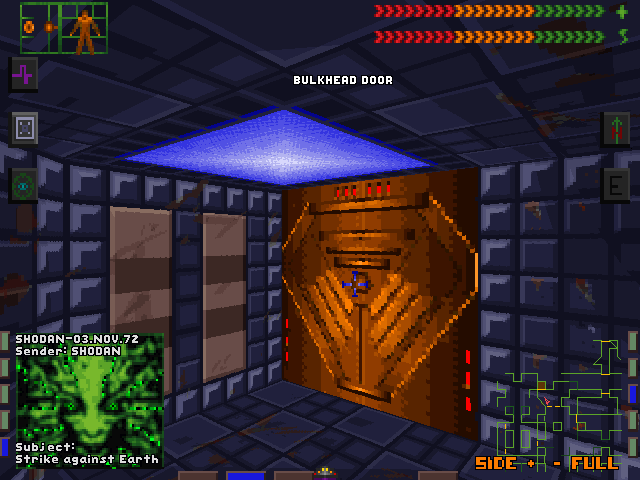 Not far from here is the lift to get to the next level. I don’t attempt to use this yet. I’ll try to fully explore each level before I go onto the next one. Next to this is a switch to open a locked bulkhead which gives me a quick route back to the start of the level and the healing station. 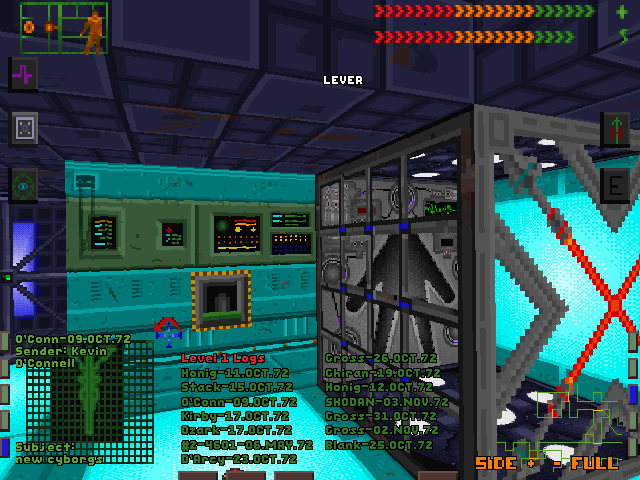 I don’t realise it at the time but this is a cyborg production chamber. It used to be a chamber for reviving injured people though and by flipping the switch I can convert it back. I’m expecting this to heal me when I walk into it having done this but no such luck. 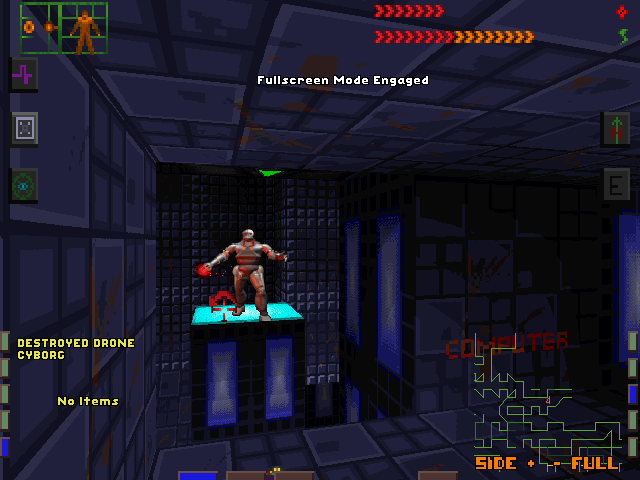 I carry on exploring and find this tough guy standing on a pedestal and hurling bolts at me. I get a few hits in but not enough… 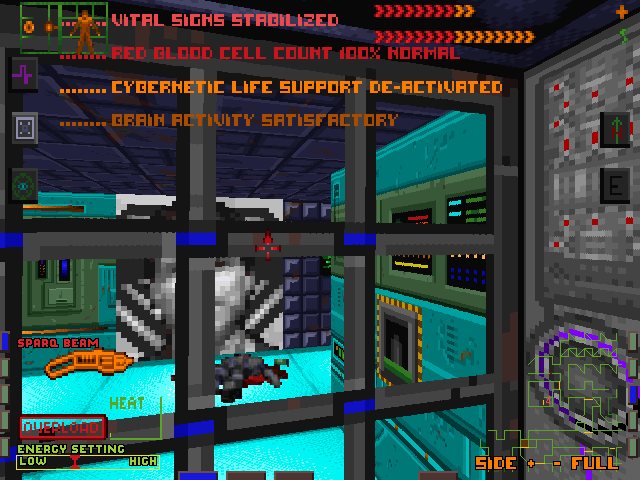 Once dead, I wake up with half my health back in the medical chamber. So thats what it does. It’s more or less the same as the silver seed from Ultima Underworld. I suppose whats happening is that the cyborgs are dragging me back to be converted but instead they just allow me to heal. It doesn’t say much for Shodans intelligence that she can’t figure out to flip the switch back again after this happens a few times.

There doesn’t appear to be any penalty for dying as often as I like at this point. Its possible that a few cyborgs/robots might respawn but I’ve not noticed anything else. There are no experience points in this game so its like the system used in Bioforge where I can just run back to the same area again and again if I die. 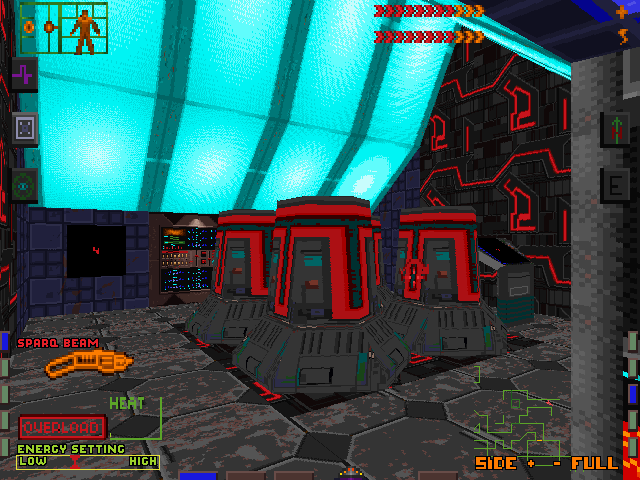 I make it past the guy on the pedestal second time around and get into a significant looking room. Shodan warns me against going in so it must be important. This turns out to be a room full of CPU nodes. By blowing them all up I drop level security down to about 15%. 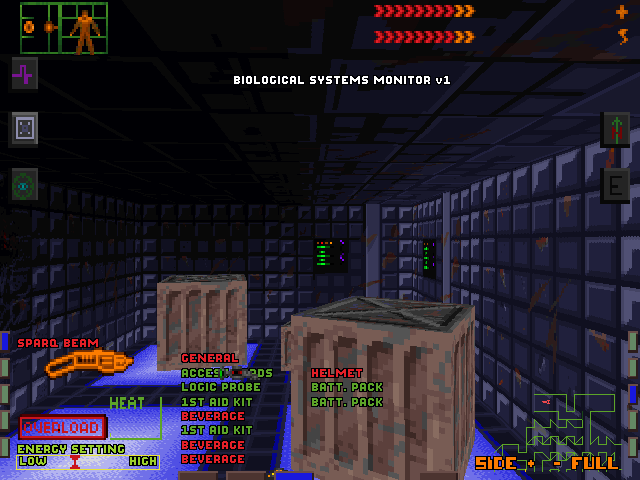 This allows me to use a previously blocked button and get into a new area. The new area is just a storage room with a new bit of hardware (biological systems monitor) and some ammo. 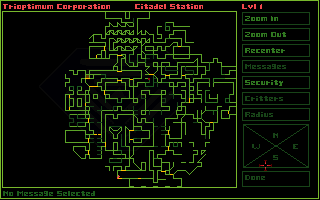 My map is starting to look about complete for this level but there are still a few doors I’ve not been through. 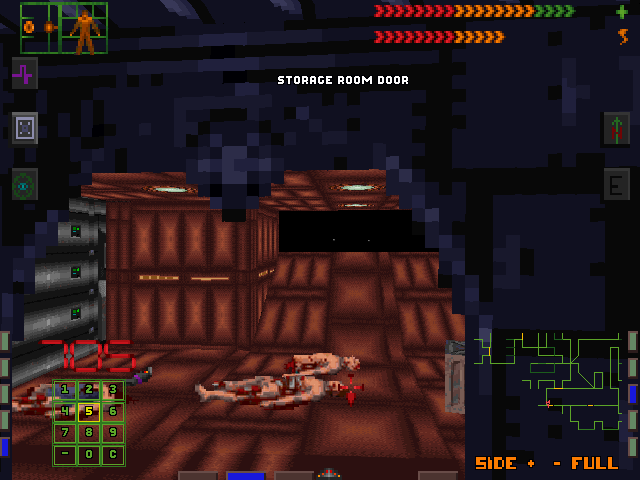 One of the logs I picked up mentioned an armoury and gave me a code for it. The weaponry in here is disappointing but I grab everything I can. 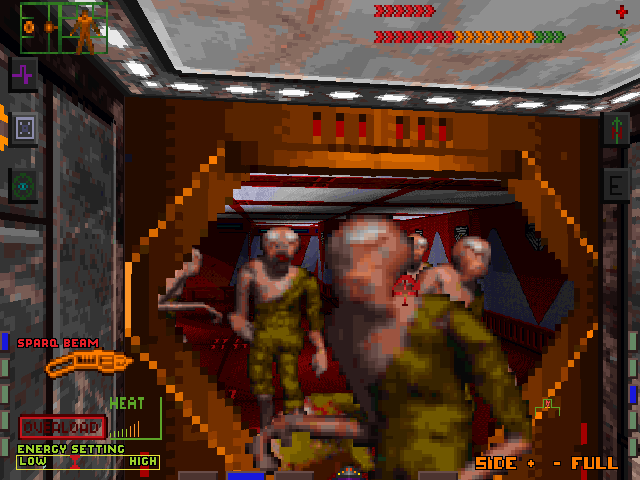 That about completes Level 1. I heal up back at the start and head for the elevator. There is a reception committee waiting for me down on Level 2. 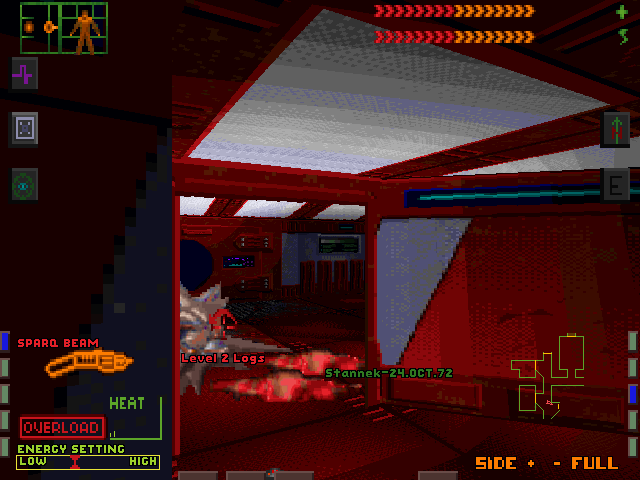 I fight them all off then after a quick healing trip back to Level 1 return to explore. There are some new creatures down here including this zero G mutant. 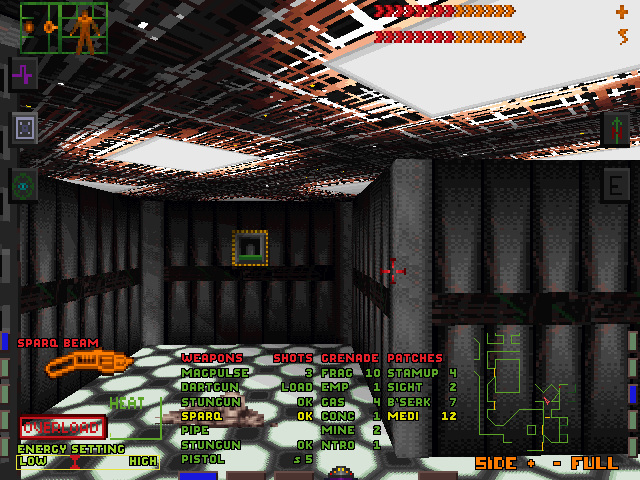 I stumble into the switch for this levels healing chamber. The chamber itself isn’t in sight. 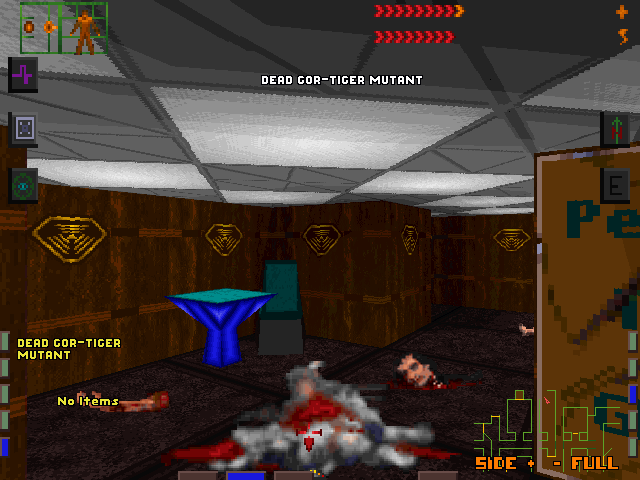 This dead tiger-gor mutant looks significant given the number of dead bodies near it. I’m glad to say I don’t find a live one while on this level. 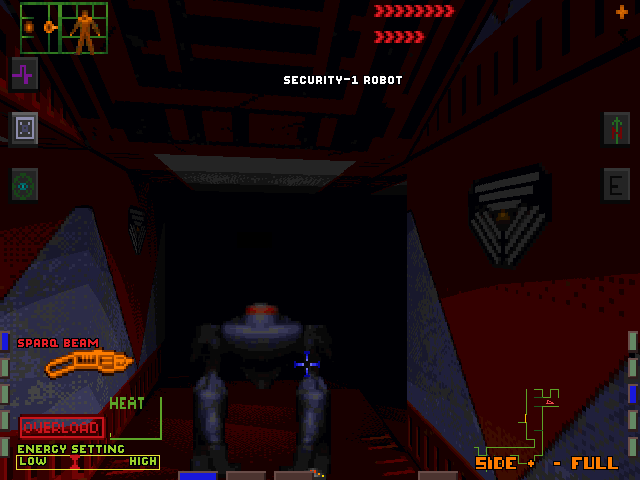 I do find some security robots which are quite tough enough right now. These take a load of hits. My two best combat strategies for now appear to be leaning around corners and failing that trying to get far enough away that they don’t shoot me but I can shoot them. My weapon of choice is the sparq gun which draws its power directly from my energy. As long as I can walk back to recharge this gives me infinite ammo which is the primary reason I’m using it. 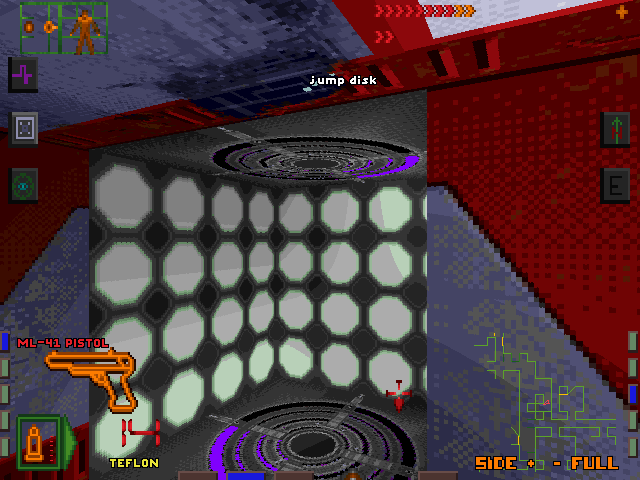 This level has a single teleport to take me to a new area. I expect I’ll see a lot more of these later on. 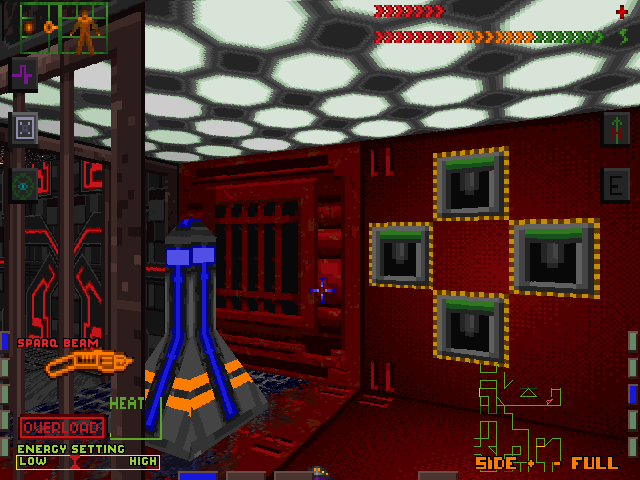 Level 2 appears is built with 4 sections going off a central hub area. One of the sections is dark and I gather I need to throw the circuit breaker which I find here next to a convenient energy recharger. 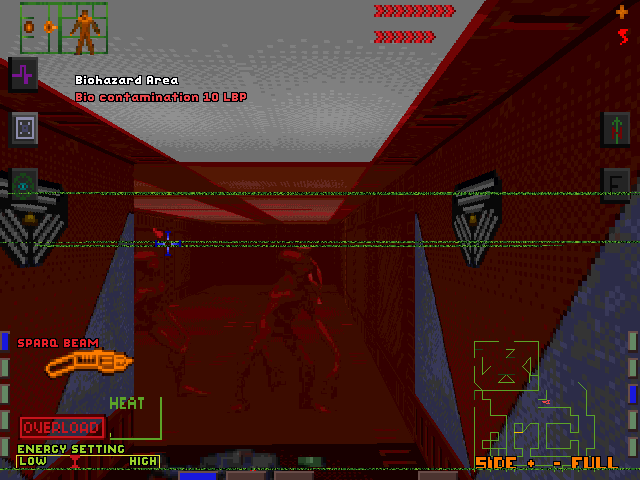 I go to explore the previously dark area. There is a high radiation area with some strange looking mutants behind a force door. I never do figure out how to get through here. 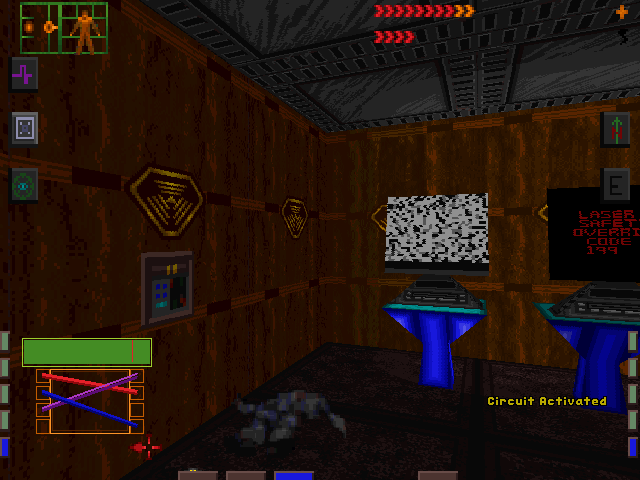 I’ve seen a few of these wire puzzles where I have to move the ends of wires around until I get them in the right places. I get some clues here as to whats correct from a meter that fills up the closer I get to the correct solution. Finishing this one here puts the laser override code up on the screen. 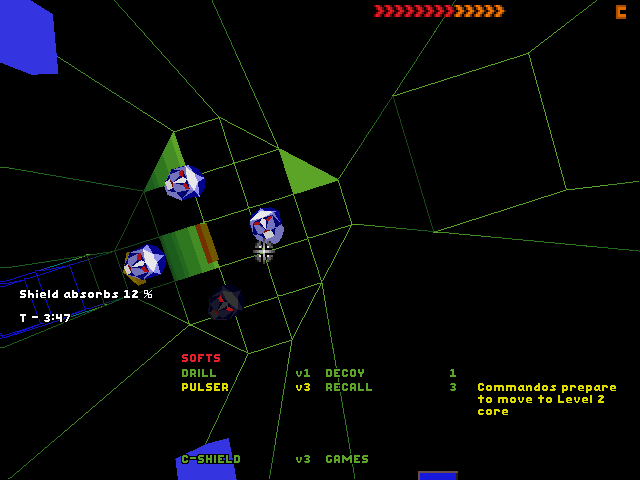 There is a new cyberspace node here. This is a much larger and tougher area that the original Level 1 equivalent. I have particular trouble with these guys above. I figure out in the end to drop a decoy first. I can even pick it back up again afterwards. 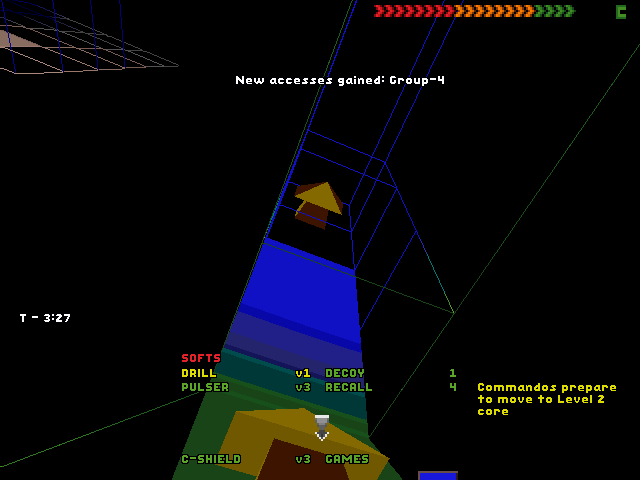 The 4 heads were guarding a new security access which I grab and head for the exit. 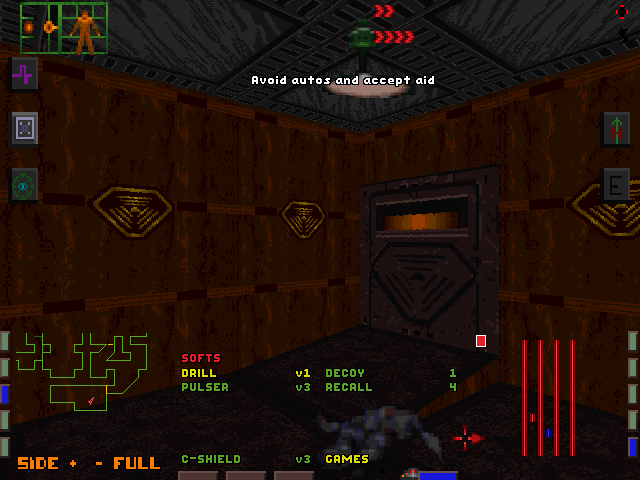 While I was in there I picked up another subgame – Road. Pong was more fun and I don’t waste much time on this. 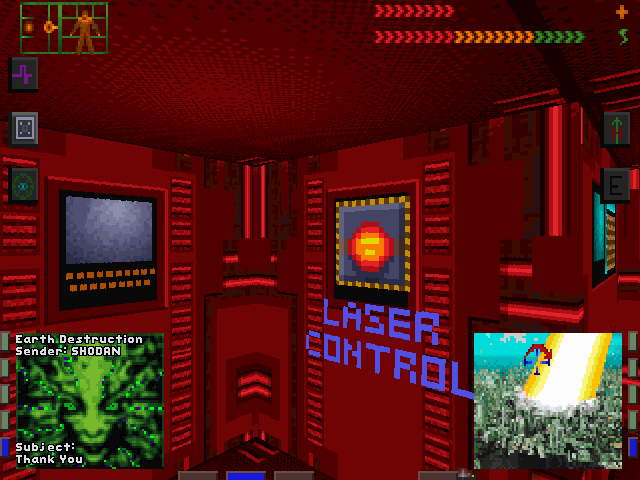 In the middle of the map is the Laser Control area. I press the button and accidentally wipe out earth…. 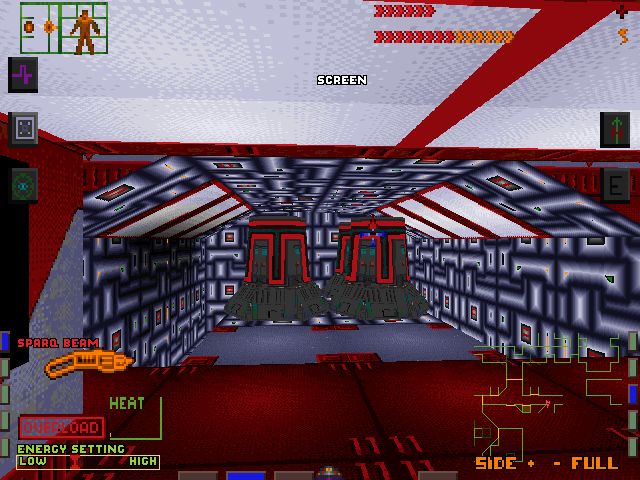 A reload later and I go back to exploring the south of the level. I find another set of CPU nodes. Blowing them up gets me attacked by a squad of cyborgs. I’ve been making liberal use of the healing chamber and need a respawn and a second chance to survive this one also. 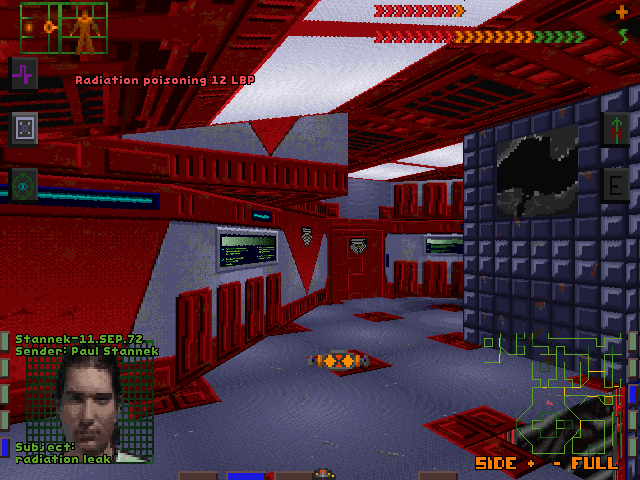 I know I need to turn on the shield using an isotope. I find an area with this isotope. Its seriously radioactive in there but I run in and out quickly. I’ve heard a bit about a radiation suit in my logs but I’ve not seen any sign of it and this didn’t actually hurt all that much. 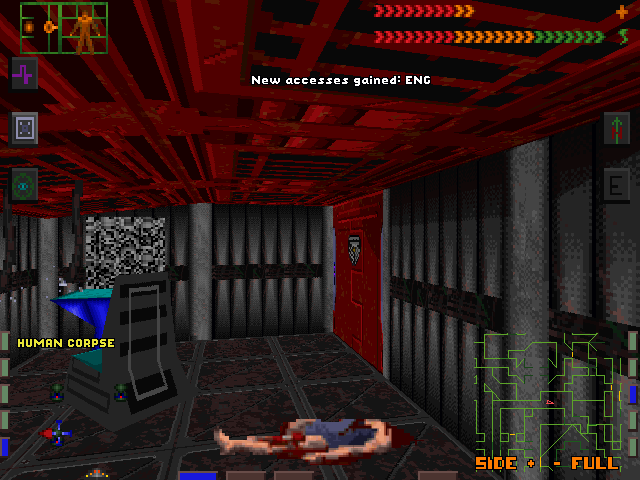 I hunt around for somewhere I can use my Level 4 access. I remember seeing a locked door earlier and get ENG access by searching behind it. I’ve not seen anywhere requiring I can use the ENG access yet. I would guess it might come in on the reactor level. 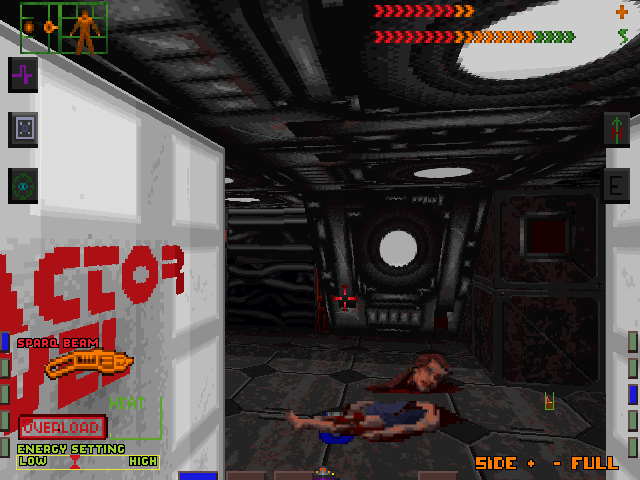 I think I’ve seen more or less everywhere on this level now and head for a new lift I discovered. This will take me to either the Reactor level or Level 3. I’d like to get this shield started so I head for the reactor level first. I’m greeted by a severed head and decide this is a good point to call it a night.

I’ve gotten much more into this game now I’ve had a decent couple of hours on it. The station is a dark and bleak place and the game generates a good atmosphere. Its let down a little by some poor acting although the voice for Shodan is excellent. The acting is still a cut above what we got in Strike Commander/Privateer at least.

I’ve gotten used to the controls now and I’m using the keyboard exclusively to move around except for in cyberspace where I revert to the mouse. This doesn’t allow the sort of reaction movement that I would need to play Quake but its just not needed here and this works well allowing me to aim and move simultaneously.

I really do like having the little automap at the bottom right hand corner – this is such a great way of being able to see where you have been easily without having to bring up the full map all the time. Why this hasn’t been adopted in more games I’ll never know.

There is a strange pace to the game – it plays a lot slower than a standard FPS and I spend quite a lot of time searching through cleared areas trying to find something new to do. With finding the respawning chamber early on, I’ve thrown caution to the wind on this second level and just charged straight into each new area – if I had to move carefully it would be slower still but it might add some tension.

I’m getting through rapidly now and apart from some DIY I’ve got to get done, I’ve not a lot on this weekend. I’ll be making a serious attempt to finish this up by the end of the week and move on to game #50.