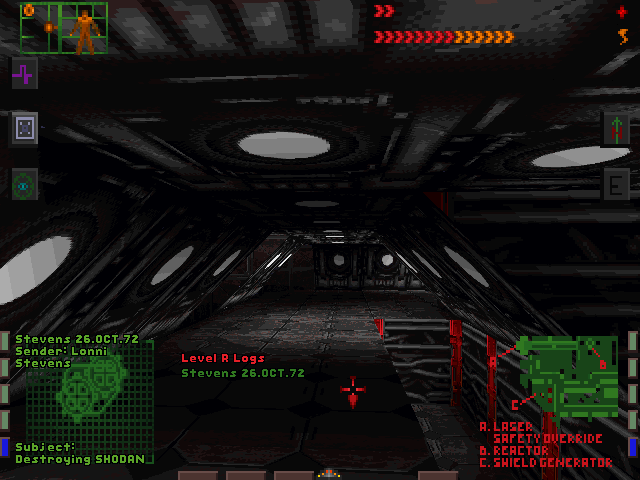 The first thing I find on Level R is a log from a guy called Stevens who had the same idea as me about destroying the laser. His log even has a little map of where I need to go. I can’t honestly say this map helped me out much in the end but at least I know what I’m looking for. 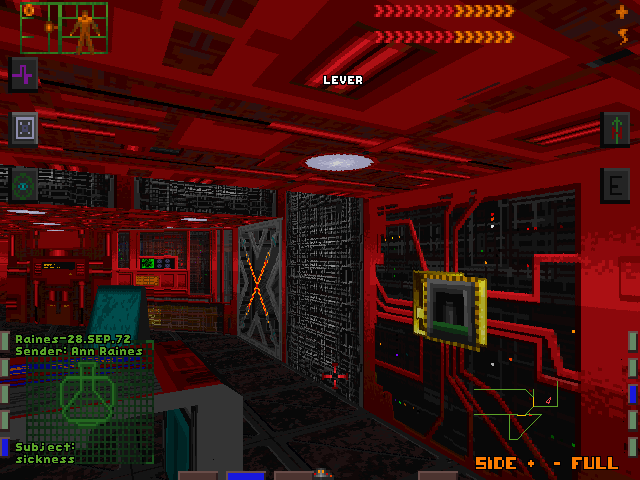 Once again I run into the healing chamber almost straight away. This will make life a lot easier. 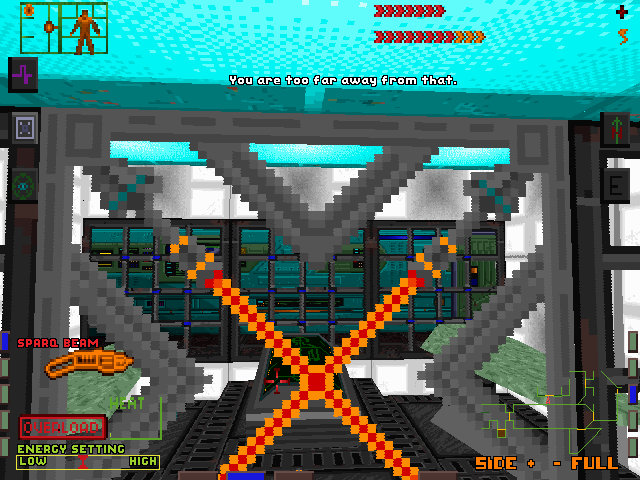 I also find one of the machines that fully restores myself. Unfortunately its behind a locked door. 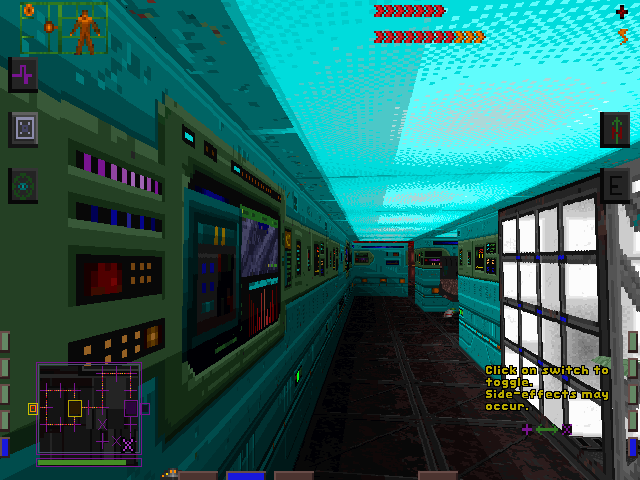 I have to solve another of those annoying puzzles to open the door. Every time I rotate one of the +’s anything on a diagonal from it also rotates. If I’d thought about it before I started this would probably have been easy but instead I blunder straight in and end up spending 5 minutes trying to sort it out. 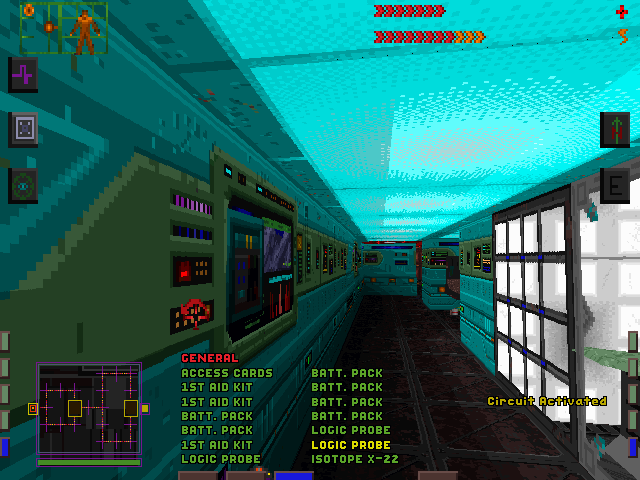 I get there in the end though and can now pop back here for the rest of this level whenever I need to. 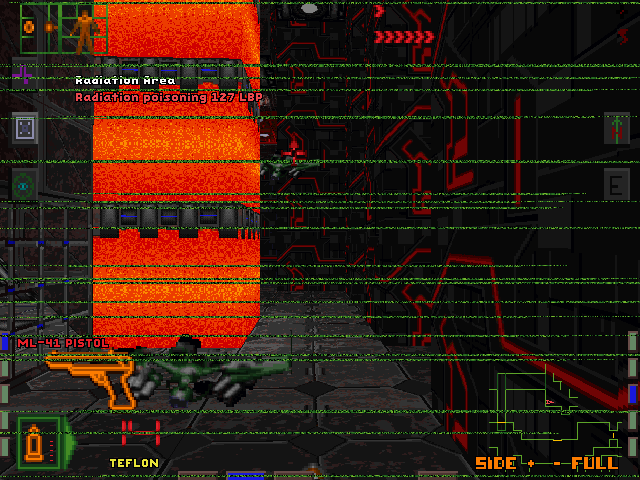 The next place I stumble into is a really high radiation area where the stations reactor is. I die here in no time and need some sort of radiation suit which I haven’t found. There are a few flying robots guarding the place. I take some of these out before I pop my clogs. 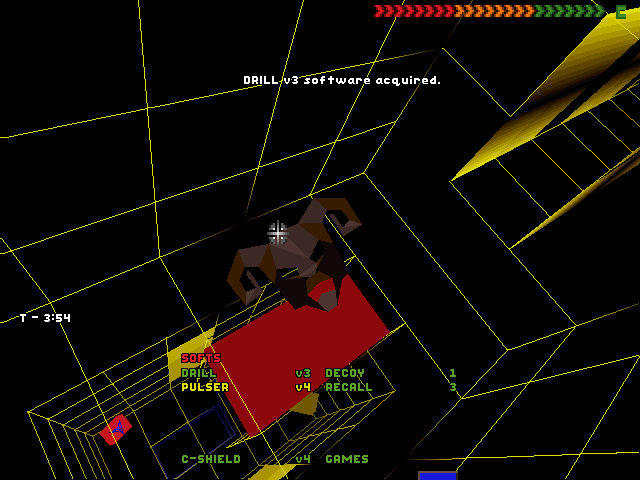 I head off in a different direction and find a cyberspace node. There are some new enemies in here and a lot of software upgrades. I also release a blast door lock but I’ve no idea where that applies to. 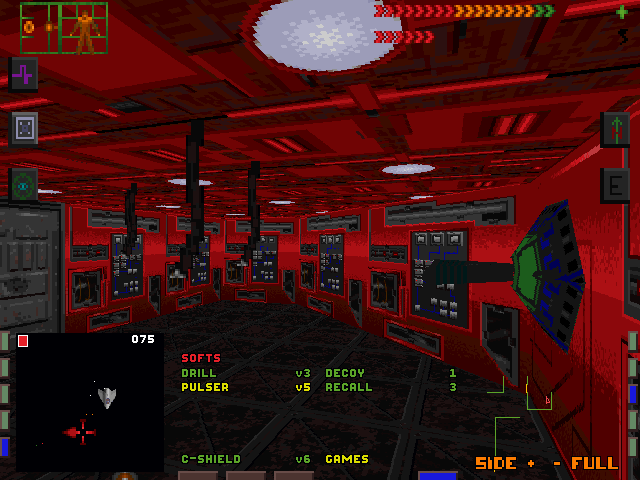 The game I find this time is a mini version of Wing Commander which runs in game. 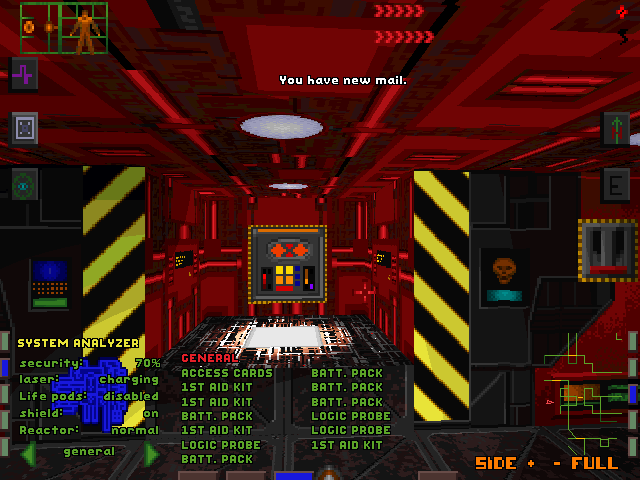 I find a likely looking spot for my isotope that I’ve been carrying around. Its even comes up as an isotope receptor when I put my mouse on it which is just as well as it takes me a bit of effort to figure out how to put the isotope in it. 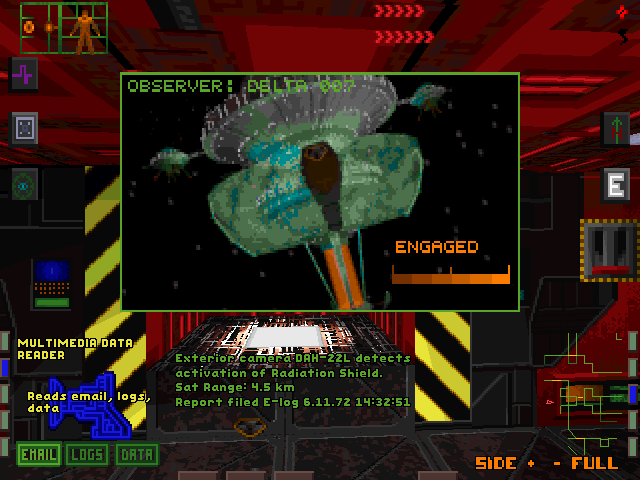 Once done I pull the lever and I get a video email showing the shield going up around the station. 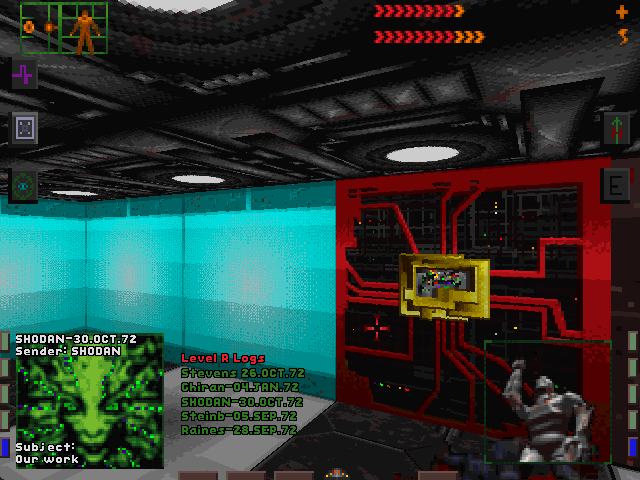 I’m still finding logs from Shodan. Her plan is becoming somewhat clearer. The virus she intends to send to earth is actually a mutagen which will somehow enable her to control earths population. She describes the cyborgs on the station as her avenging angels…. 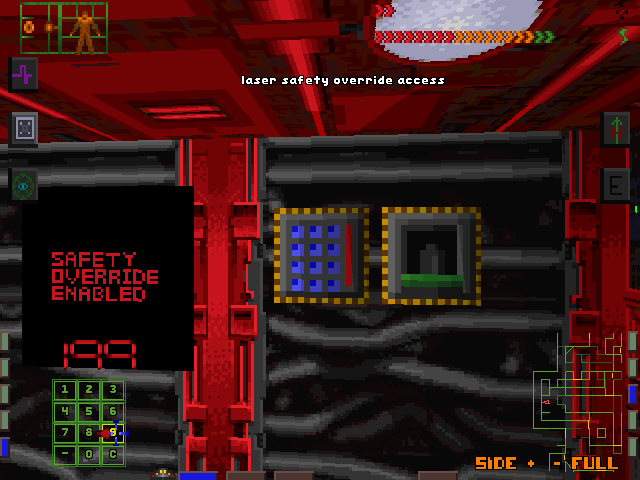 It takes a while but I find a route to the safety override for the laser. I key in the code and don’t realise that I need to pull the lever so I end up coming back again later to finish the job. 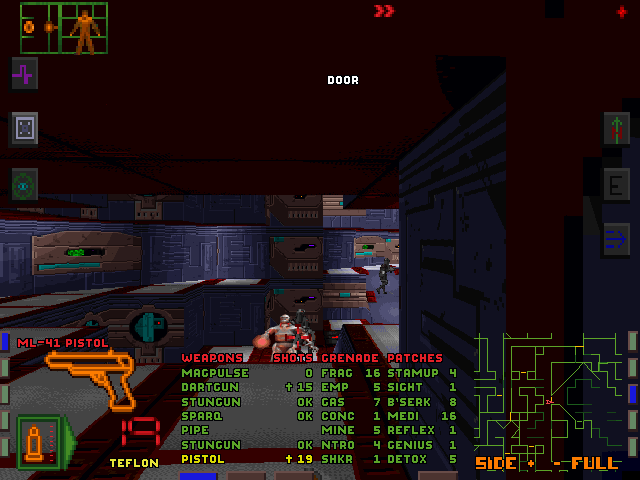 Its back up to Level 2 to fire the laser now. The moment I head in Shodan springs a trap on me. I heal and return to clear out the room. 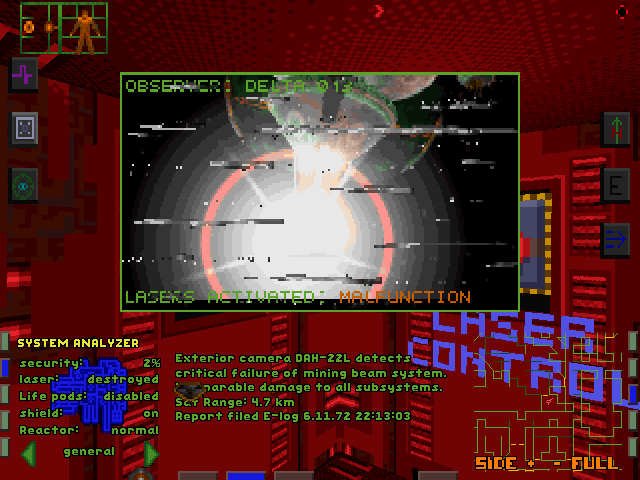 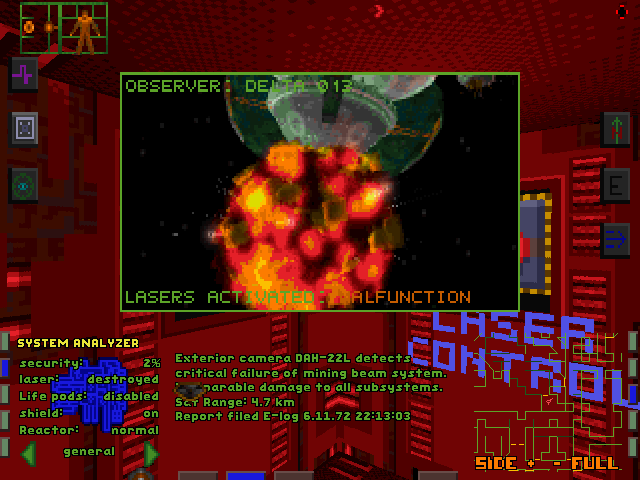 I go and fire the laser and receive a video email showing it blowing up. Thats one threat gone at least. I get another email from Shodan straight after telling me that she will just use her virus instead which she has developed in some groves on the station. That sounds like the next job. 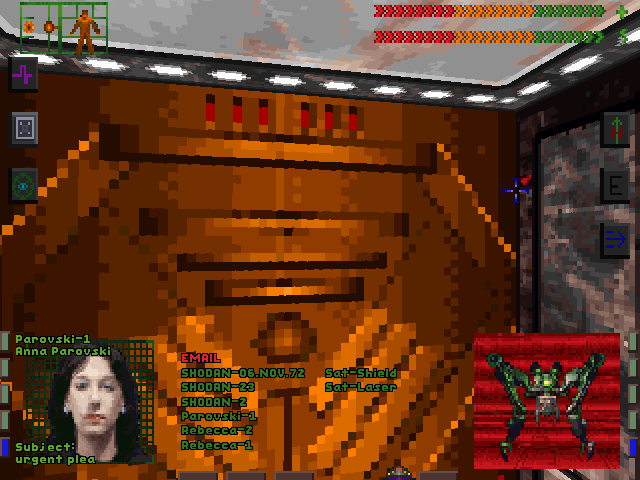 I head back for the elevator to go to level 3. I get another email from someone who claims to be still in the station but is under attack. I seriously doubt I’ll run into anyone friendly in this game so I don’t hold out much hope of a rendevous. 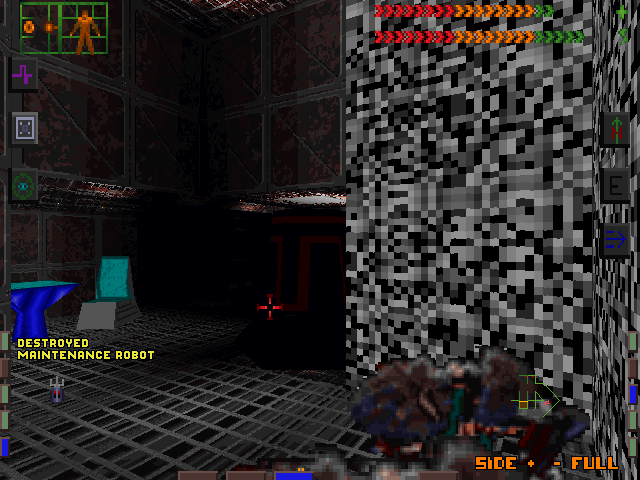 On level 3 I run into a CPU node straight away and take it out. 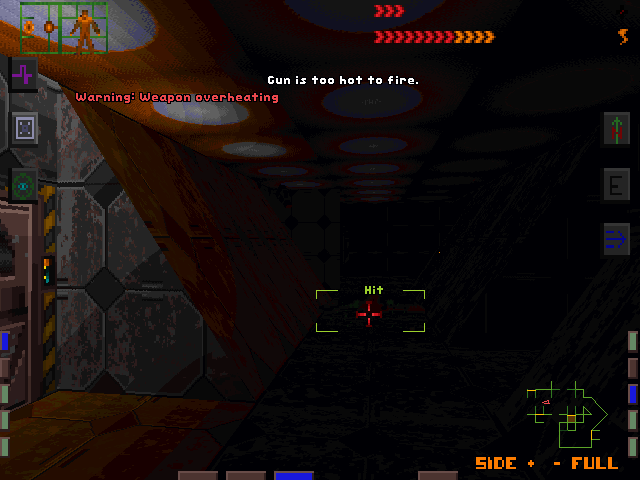 The enemies here are all these sort of invisible stingrays that flap along the floor firing purple rings at me. They are extremely tough to say the least. 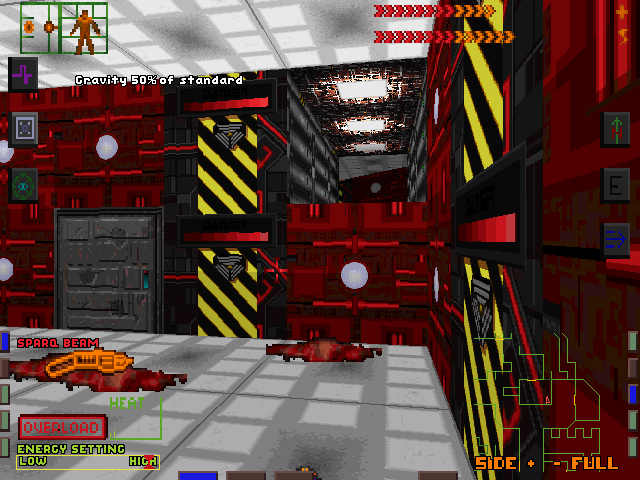 I’m struggling with these stingrays so I head back to see if I can find anything useful on the levels I’ve already visited. Back on Level R I find a low gravity area full of mutants. There has to be something good in here. 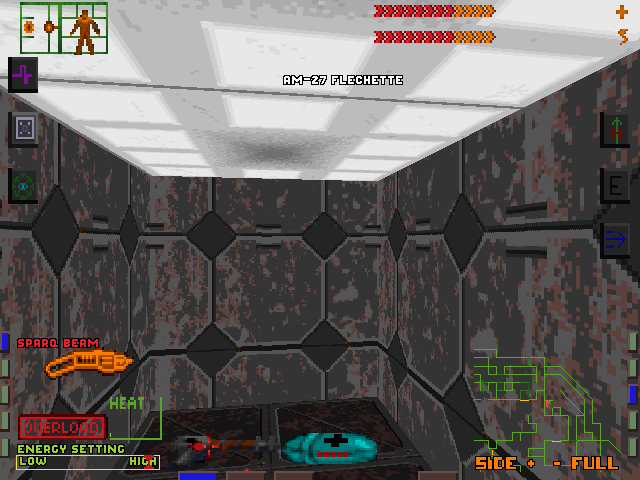 I bounce up a couple of ledges using the low g and find a new flechette weapon. I do a bit more exploring and also discover some shield hardware which has to help. 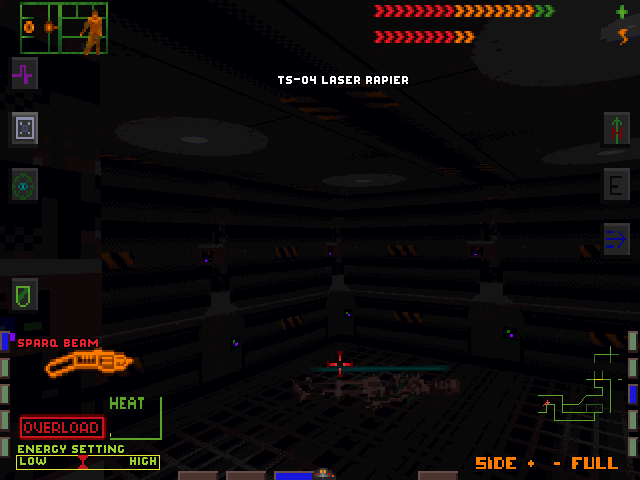 Back to Level 3 again. Just down from the entrance I discover a laser rapier weapon. This thing is to all intents and purposes a lightsaber. It takes out those stingrays in 2 hits – my strategy from this point is to raise my shield then charge in whenever I see an enemy. This actually works pretty well. 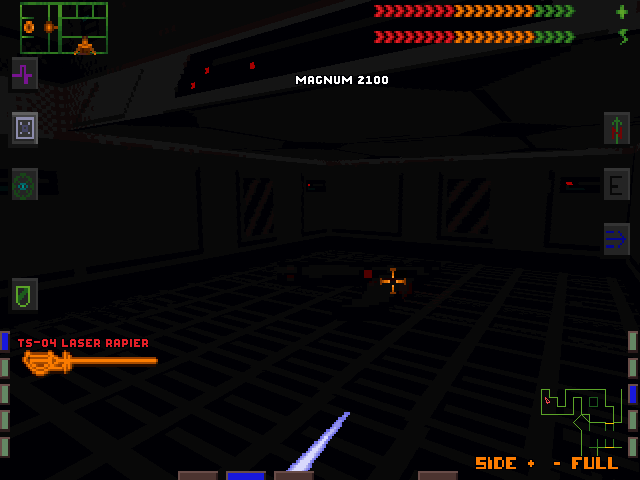 I also discover a magnum. By this point I’ve got so many weapons I’m having to drop some to make room for the new ones. 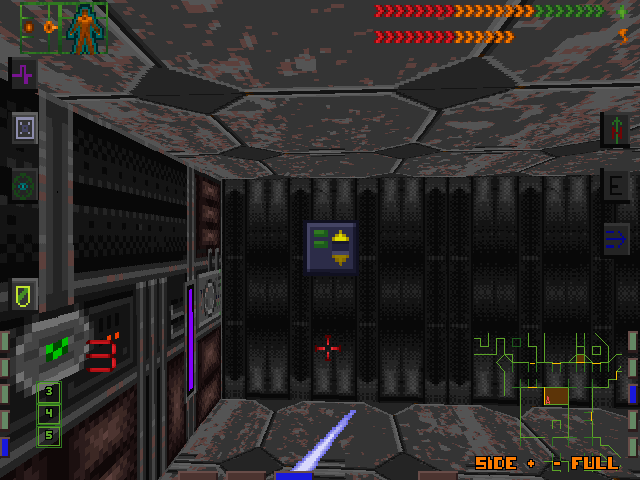 There is a freight elevator here which will take me to levels 4 & 5. I carry on exploring for now but aside from a load of locked maintenance doors I don’t find anything much. These doors won’t open unless there is something to repair I gather. 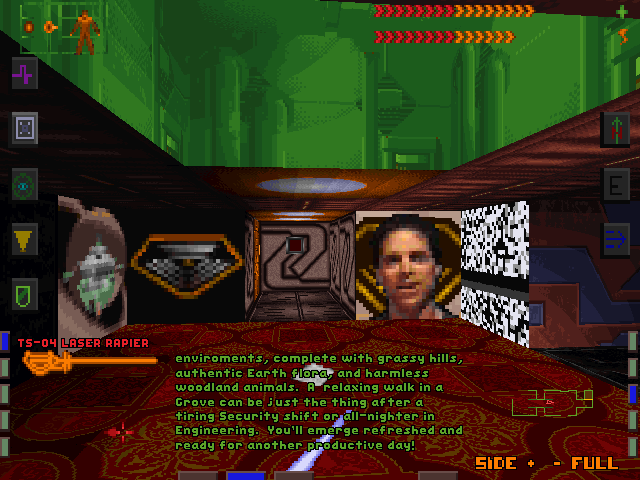 There is another elevator which takes me to Level 6. I pop up to have a look around and this turns out to be the grove level. I’m a bit unsure if I should really attempt levels 4 & 5 first but unless I really struggle I figure I’ll stick with this for now.

The graphics for level 6 are quite different once again. I’m impressed with how unique each area feels, games like FEAR could learn a thing or two from that. The more I play of System Shock, the more I’m liking it actually. With new weapons and hardware, the complexity is increasing all the time giving me a lot of options on how to attempt to play the game. I’m looking forward to a good long session on this later today and will see if I can’t have this mutagen problem sorted out by later tonight.