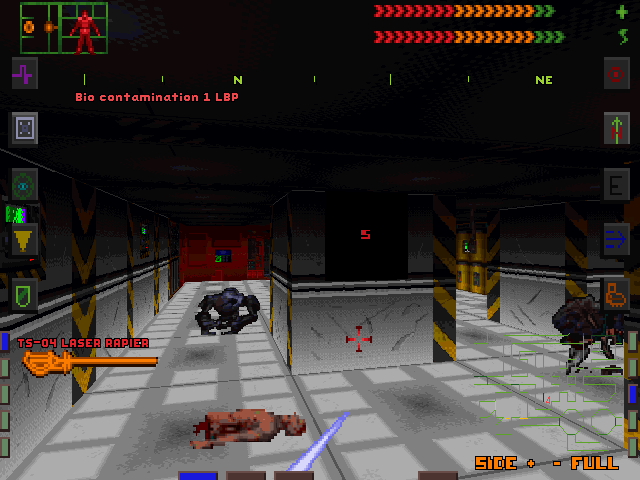 I carry on finding all the numbers I need from the CPU rooms. For the fifth floor I honestly had no idea where that room was and I didn’t take a screenshot at the time so I ended up searching all over until I blundered into a screen with a number on it. 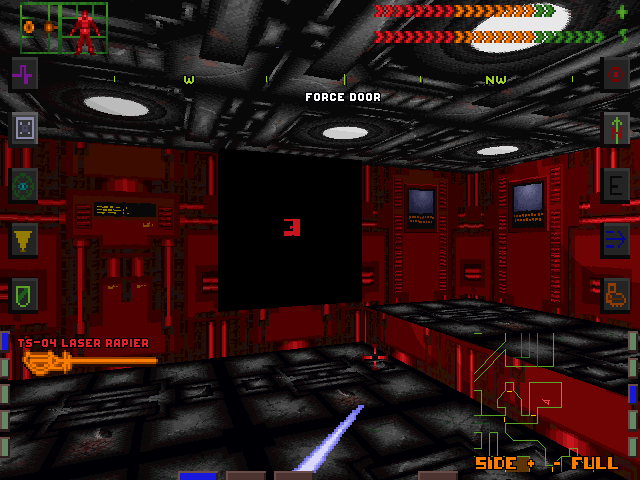 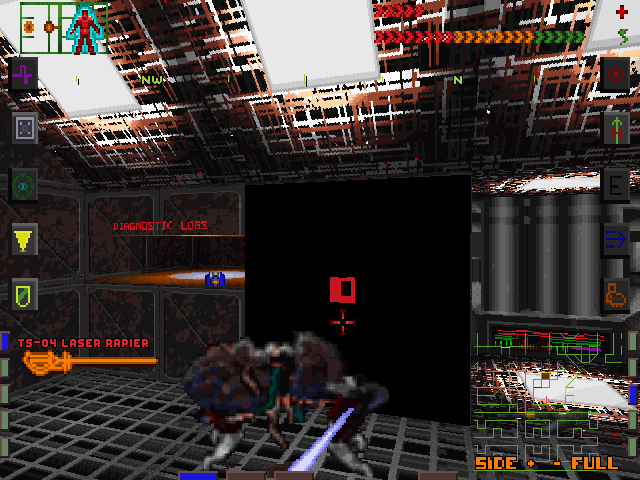 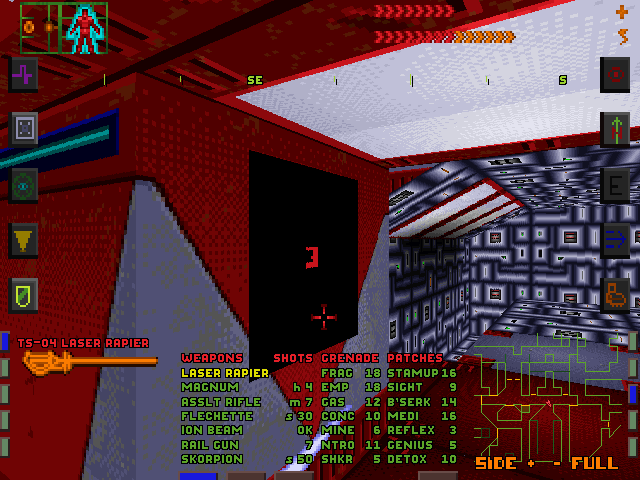 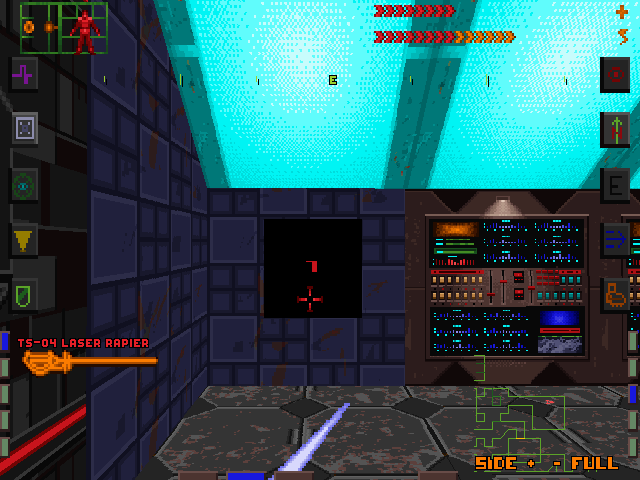 I work my way through the rest of the levels backwards at a much quicker speed as I can head straight for the right room each time. 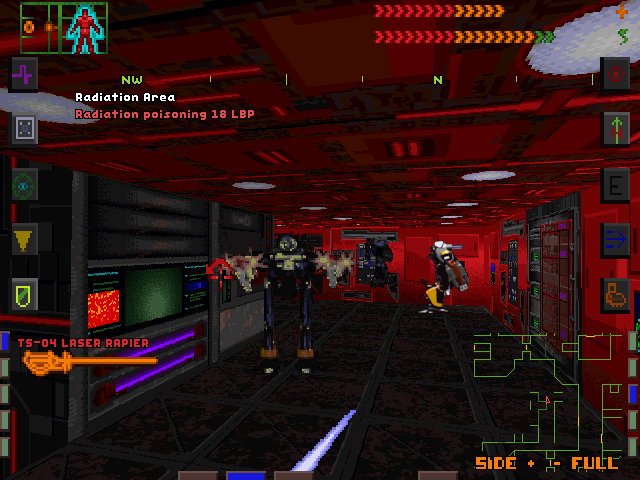 Its then back to the Reactor level for the area I’ve not explored yet. Apart from being highly radioactive its extremely well guarded and I need a few attempts to get through as I’m hacked down in seconds before I’ve thinned the numbers down. 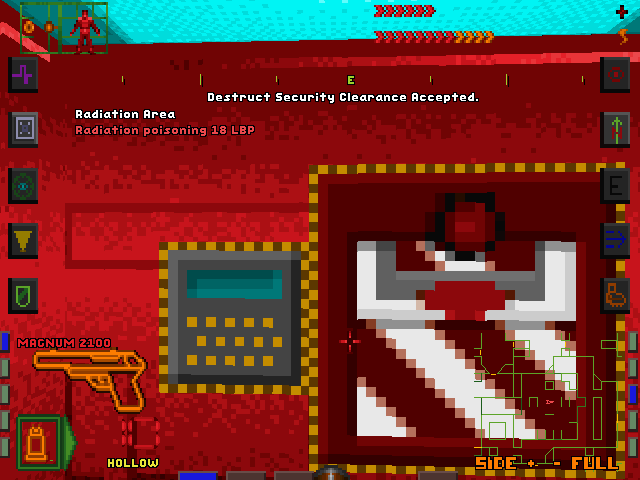 The reactor code has to be enterred into a panel up inside the reactor rods. I activate an anti-gravity pad and float up to the top. I try entering the three numbers from the first 3 levels first. It sounds to have accepted this but nothing happens. I then try the same with levels 4-6. This time it works and I can pull the lever to start the reactor explosion. 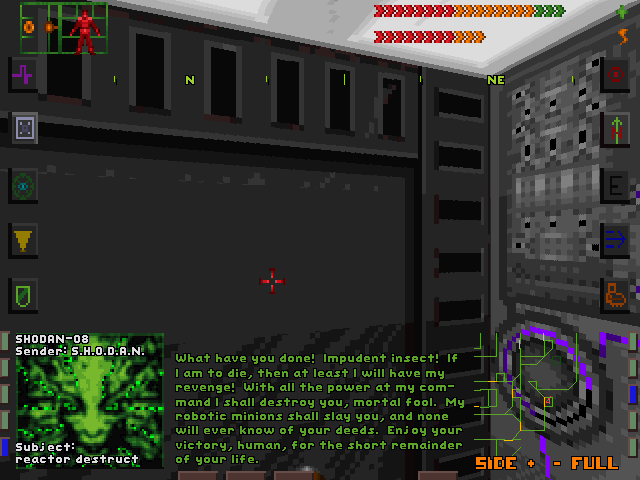 Shodan doesn’t take too well to this and releases a load of new minions to make my progress all the way back to the escape pods difficult. 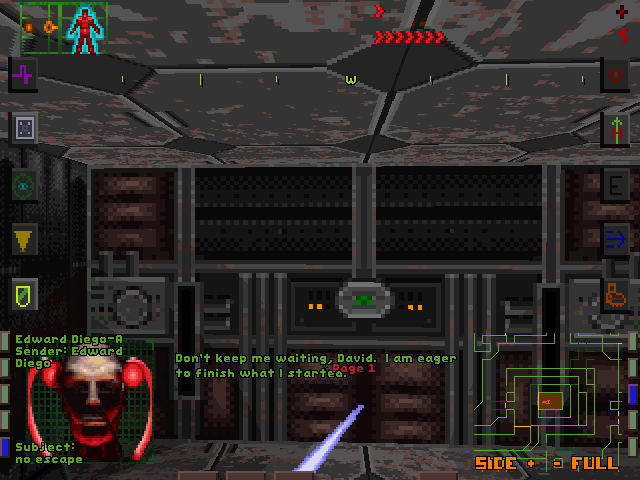 When I get to Level 5, I get a message from Edward Diego who is still around. It turns out that the dual lightsabre bloke I fought earlier on was a cyborg version of him. This wasn’t clear at the time (although it was his office that I fought him in). 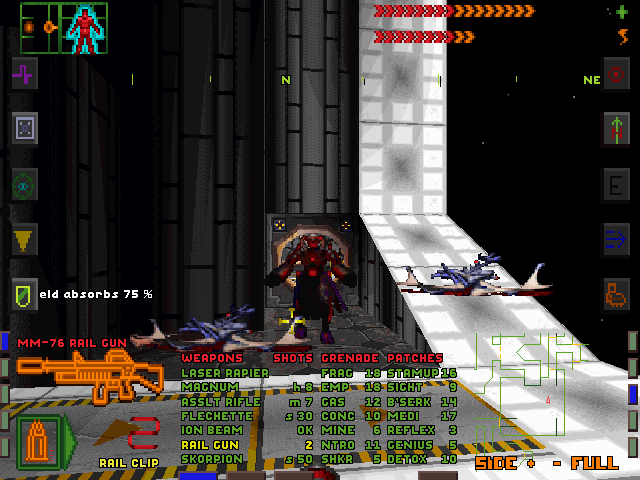 He is waiting for me by the escape pods so I have to defeat him once more. Again he teleports away at the end. 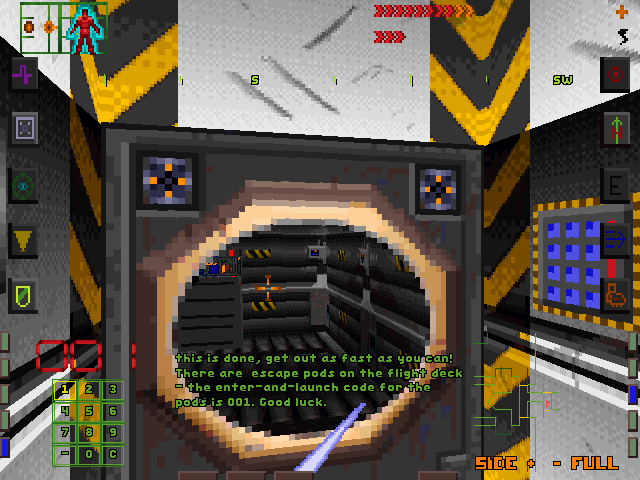 I open up an escape pod using the code I got in an email much earlier…. 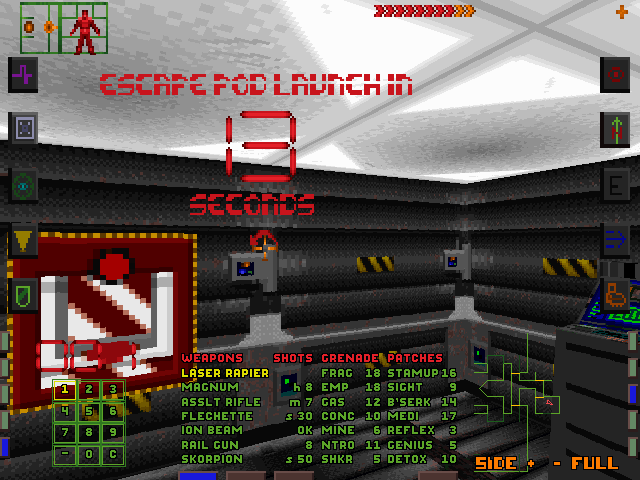 ….and pull the launch lever. The countdown begins and it looks like I’ve won. 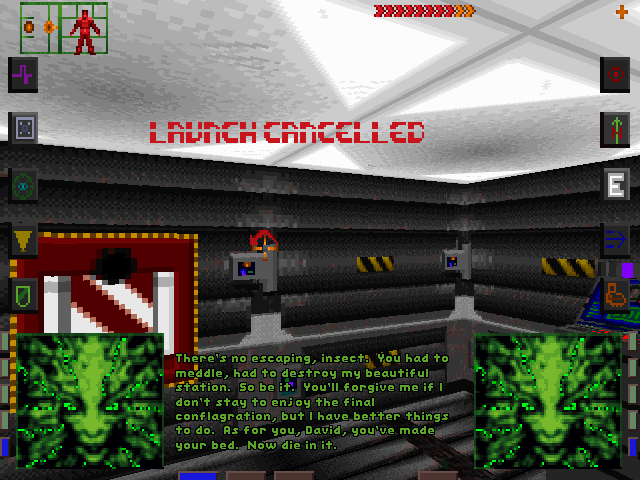 Shodan has other ideas. I kind of wish I hadn’t known how many levels were in this game beforehand as this might have come as a surprise. I’m told by Rebecca that I now have to get to the bridge (via security). 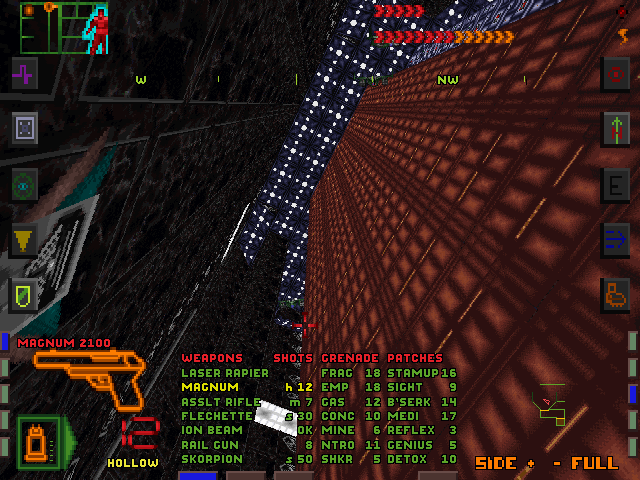 The security level is where Shodan has been building her fortress that I’ve been hearing about throughout the game. This level is tall with things flying around way above that shoot me if I don’t take them out. As ever this level is very different to whats gone before. It puts me in mind a bit of some of the city levels in Doom 2. There is definitely an outdoor feeling to things with such a high ceiling. 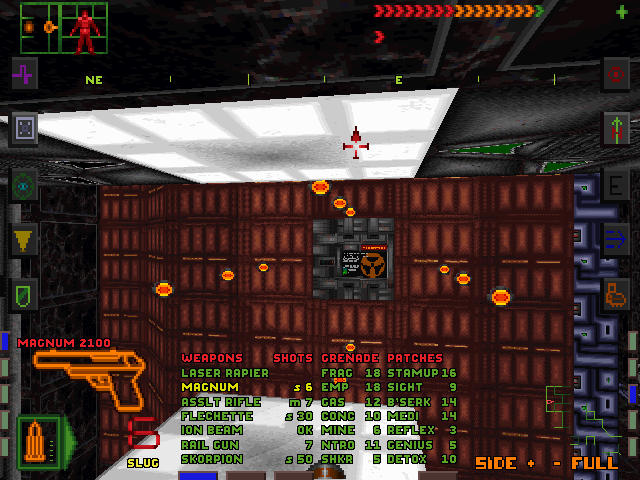 My aim on this level is to turn on a lightbridge to allow me access to the bridge. I’m guessing that the bridge will end up being here. 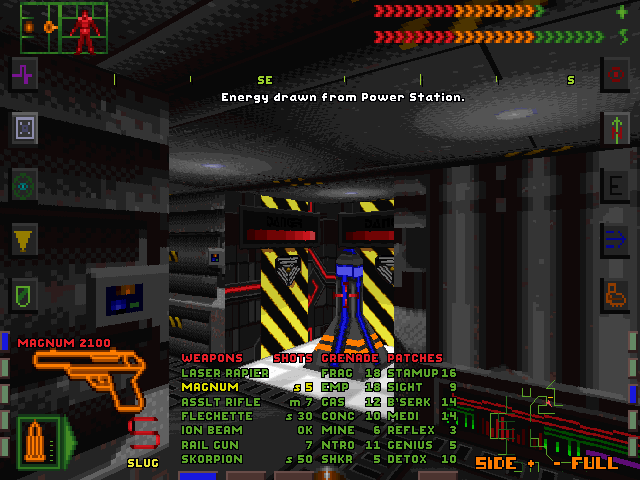 I slowly work my way around the outside of the central structure. I’ve not found anywhere to heal so I have to be careful. If I start getting shot at, its often hard to figure out where the cyborg thats shooting me is. There are a lot of them on platforms half-way up buildings as well as the ones that are flying around. On the far side of the central building I find a door with a recharge station in it. This will help a lot and I can just leave my shield on all the time. 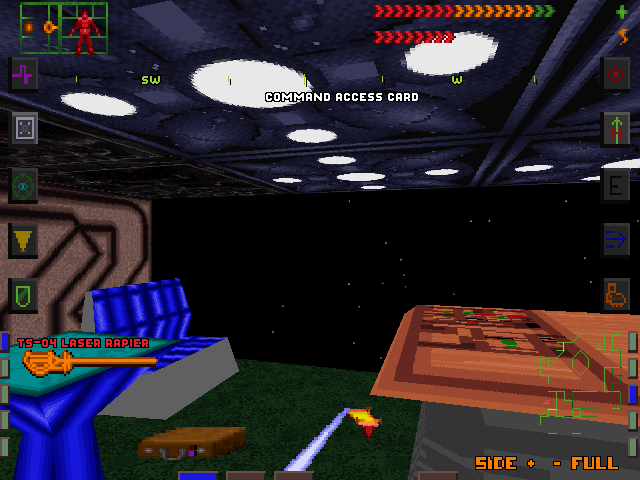 From here I work my way into one of the outer buildings and things revert back to normal. This is a lot easier as I know where enemies are coming from. I find a command access card in an office. 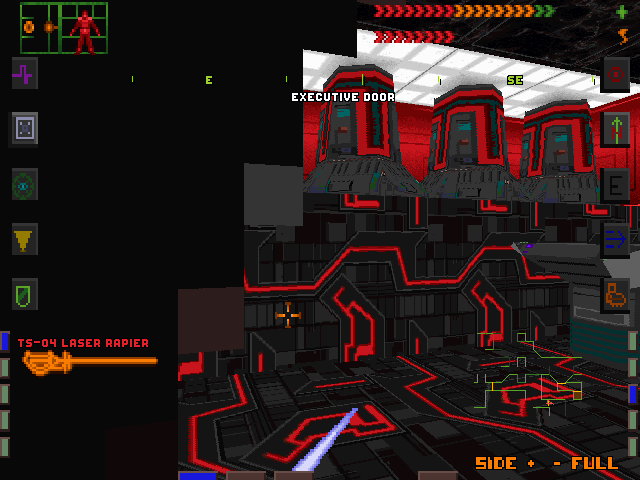 The CPU node room is in this building also. I’m not sure if there is any benefit to destroying these on this level but since I’m here I may as well. 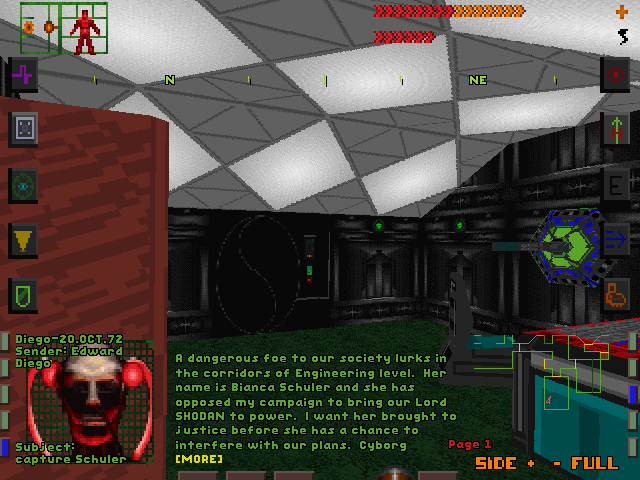 I find a log from Edward Diego who has obviously been here first. He does appear to be wholeheartedly supporting Shodan. 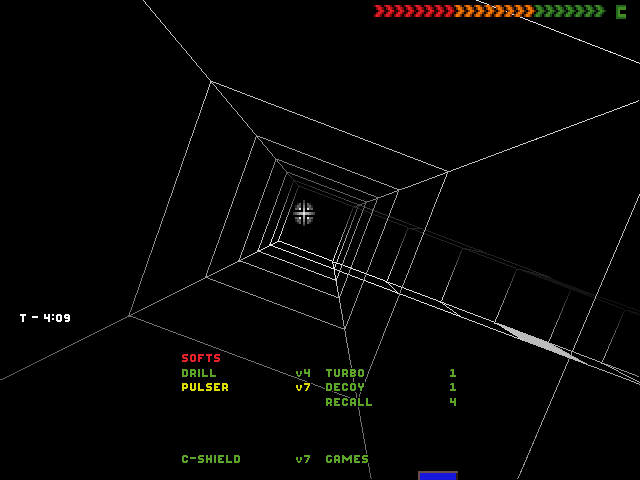 There is another Cyberspace node here. Cyberspace is largely empty this time around. I also have to navigate myself through the tunnels rather than being sucked through + there are no arrows to guide me. This is actually a lot easier as I can slow down. 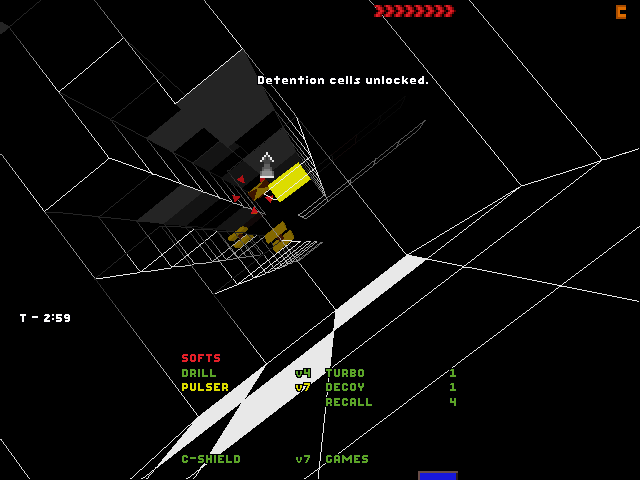 I manage to open some detention cells but I’ve no idea where these are. Writing this now I’m thinking of the locked up area on level 6 but thats just a guess. There would have to be something very nice in there for me to go all the way back at this point and all I remember seeing is a load of mutants. 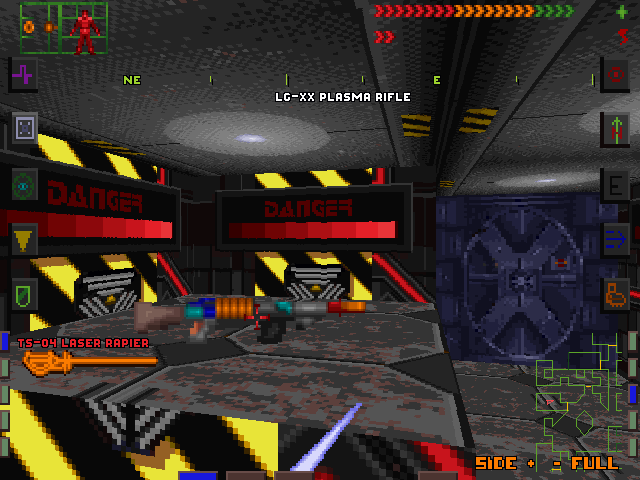 I find a new weapon – a plasma rifle. This thing goes through energy very quickly but can kill plenty of creatures in one hit. The shots bounce around as well so I can shoot round corners. The downside is that my shots can bounce back off an enemy and hit me. 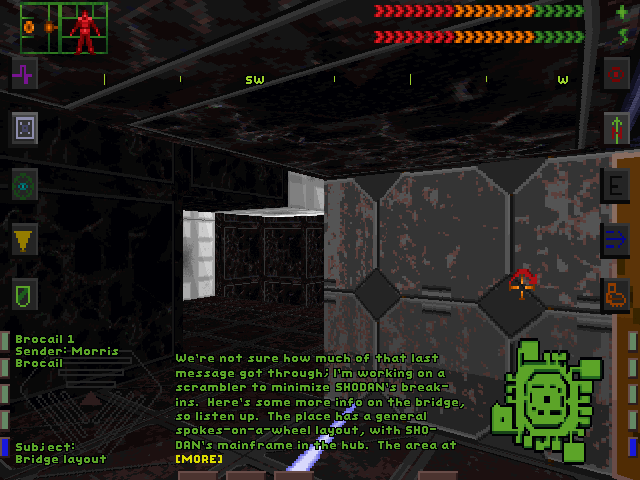 I must be getting near now as I get an email from Earth telling me what to do on the bridge + a little map of the level. 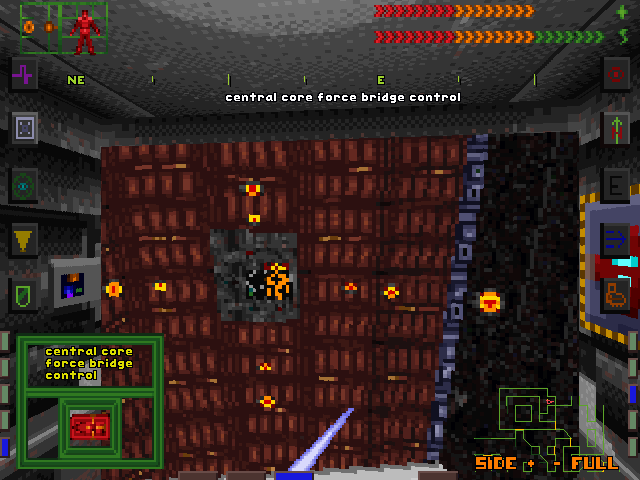 I find the switch to activate the force bridge nearby. This is shown being activated on the screen next to it. These screens that show a realtime view of the world must have been a first for System Shock. It’s the sort of thing we take for granted these days but I can’t think of a game where I saw this again until years after this. The textures are very low res on the downside. 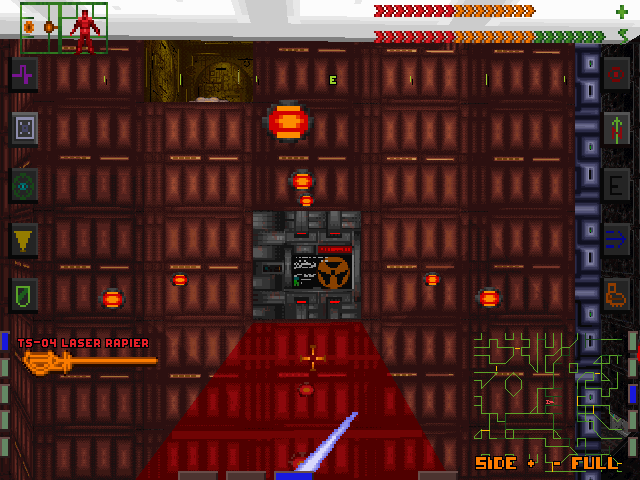 The bridge pops up just where I expected it and I head back and into the central building. 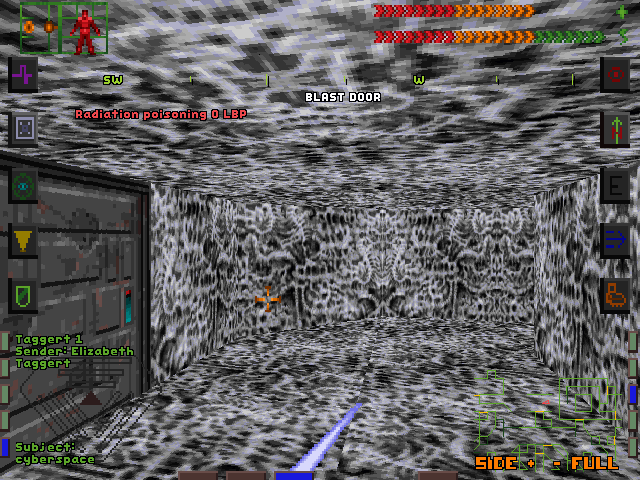 I have to climb a really large ladder through a radiactive area and then enter a very strange looking room. I’m getting messages that Shodan is attempting to separate the bridge at this point so I don’t hang around. 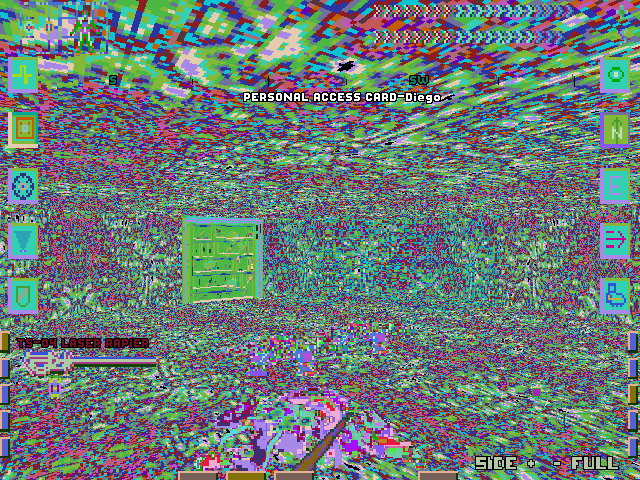 I find the lift and try to open it only to be told I need an access card. At this point Diego pops out of nowhere right behind me and I have to fight him again a final time. I don’t have too much trouble with this but the second he dies a load more mutants are lowered into the room. I end up using a few powerups to get me through this area. I grab a new access card off Diego’s body afterwards. 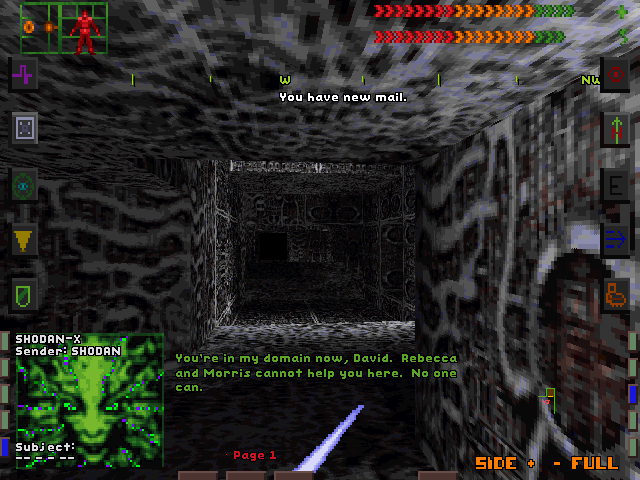 That gets me into the elevator and I finally reach the bridge. I stopped here – in the end I only managed about 2 hours on this yesterday later yesterday evening and rather than attempting to rush this last level I decided to leave it for tonight. I’ve no idea if there are 5 minutes or another couple of hours left at this point.

I went into this game with very high expectations and it hasn’t let me down. The story and level design have both been uniformly excellent and technically the game was way ahead of its time. I still prefer the Underworld games but that may be mainly due to the fact that I remember what it was like to play them back in 1992/3. System Shock on the other hand has to compete with another 15 years of FPS games. Even given this, it still holds up amazingly well – the gameplay here is far more involved than your standard FPS and we would be waiting years for anything that could compete.

I can see how System Shock would make it into a list of the best games ever on that basis although I find it hard to get that attached to an FPS myself. For me most FPS games tend to be technology showcases that date incredibly quickly and are not really worth going back to years down the line. System Shock has more to offer than that and is well worth anyone’s time if they can look past the dated graphics and odd controls but there are still newer games I’d play first.

As much as I like this game, for someone who regards Ultima Underworld as possibly their favourite game of all time, its hard not to see System Shock as a bit of a dumbing down. Technically this game was extremely impressive but its only incremental improvements to what we had already seen in Ultima Underworld (a game which needed to run on a 386) and for those incremental improvements we’ve seen backward steps in other areas (i.e. no conversation system, stats, etc). In short, I’d have preferred a 3D RPG rather than a FPS but playing this has still been some of the most fun I’ve had in this blog and I’ll definitely be trying out System Shock 2 after I finish up with all these Origin games.