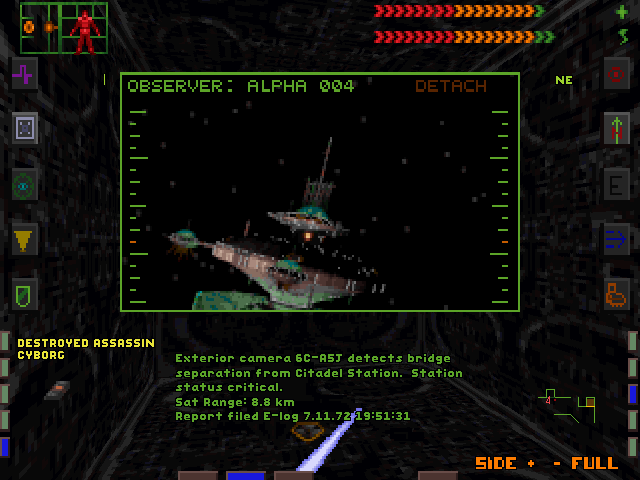 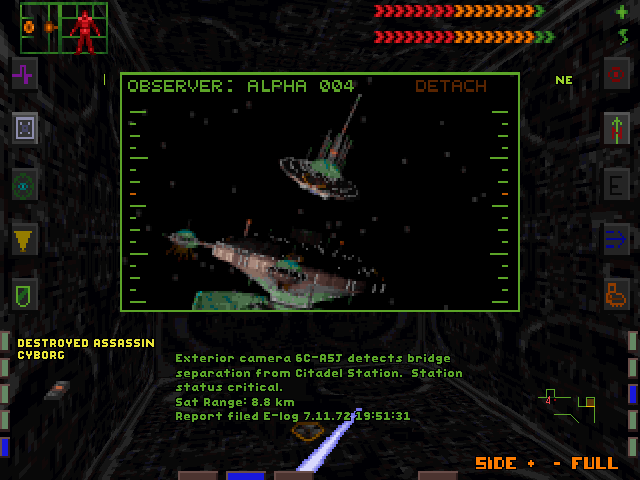 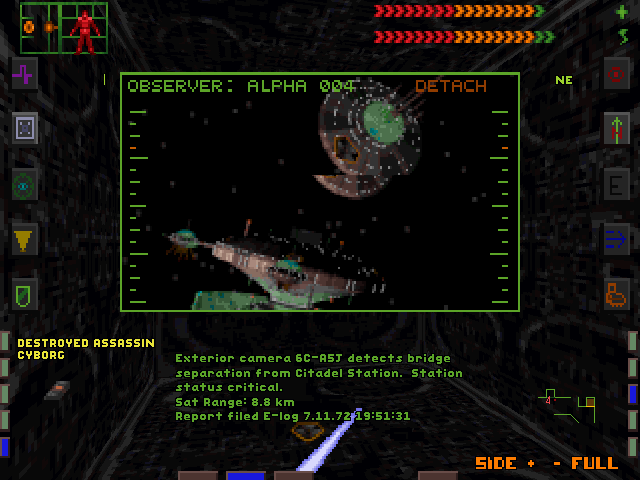 As soon as I walk onto level 9, I get another video email showing the bridge separating from the rest of the station. There is no running back to the escape pods now. 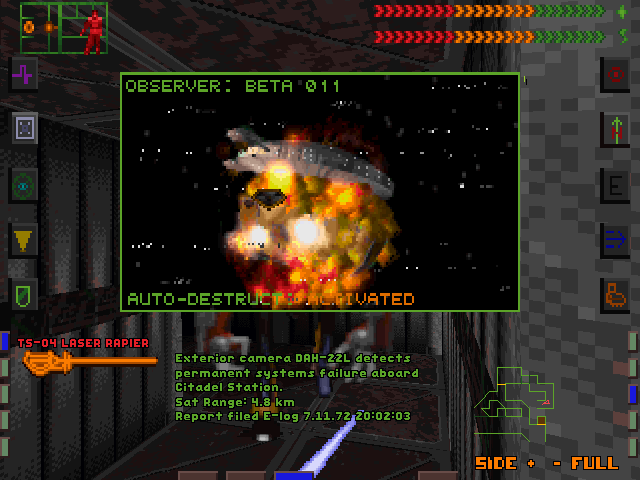 Right in the middle of fighting a cyborg I get another email showing the rest of the station blowing up. 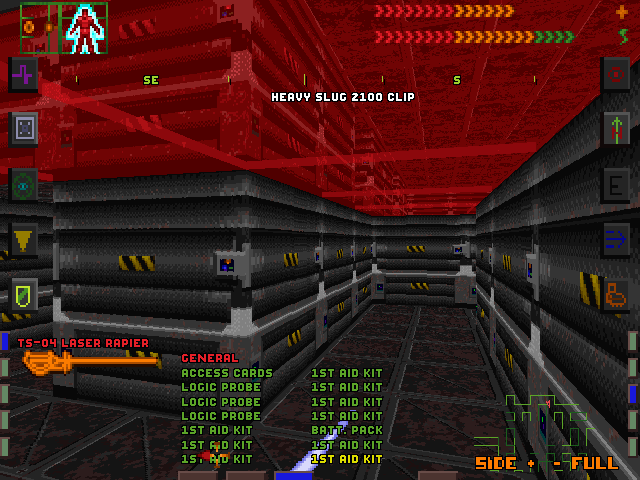 Level 9 is a decent size – I thought I’d possibly just walk straight into the final battle but its not that simple. I don’t know all this yet but there is a central area where I need to enter cyberspace and battle Shodan. At the moment I haven’t got access to this. I need to hack into a panel in another room using and isolinear chipset. This room is behind 3 force walls which have to be turned off one by one. The 3 walls are controlled from 3 different areas which I have to work through one at a time.

The first area I enter is a maze like room full of cyborgs. 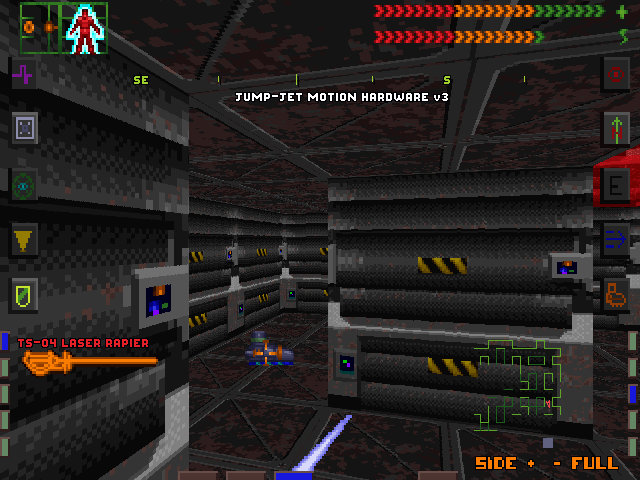 Walking around here nets me quite a few hardware upgrades – I think all the best equipment can be found somewhere on Level 9. I don’t find the switch to open the force wall but I didn’t realise I had to look for it at this stage. 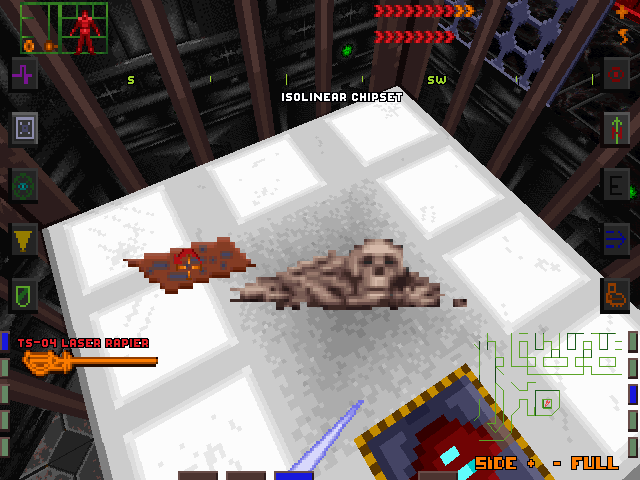 Elsewhere I do find a cage containing a mutant which I have to teleport into, killing the mutant and grab the isolinear chipset which I will need later on. 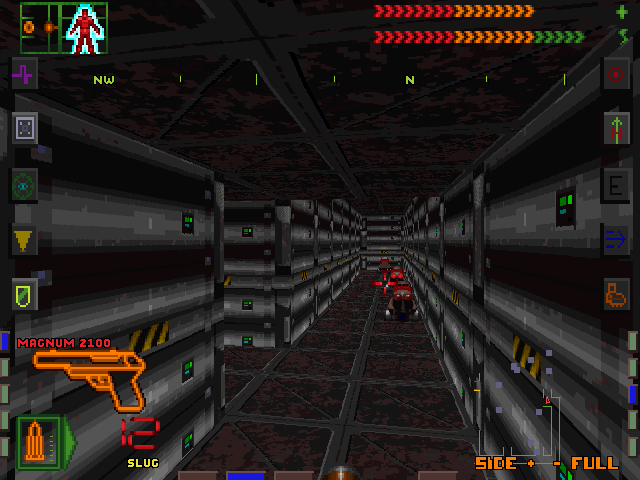 The second area I explore is another maze this time full of little robots that explode when they get too close. There must be a couple of dozen of these scuttling around in here and they appear to keep respawning. This is probably the most dangerous area on the level. 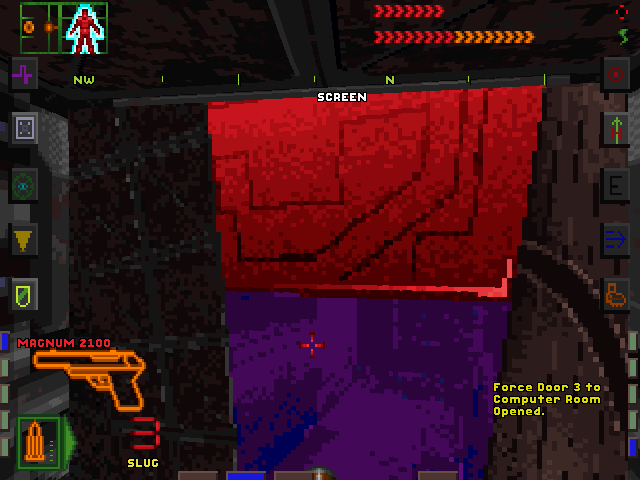 This time I find a screen showing the force wall and I have another puzzle to solve to open it up. 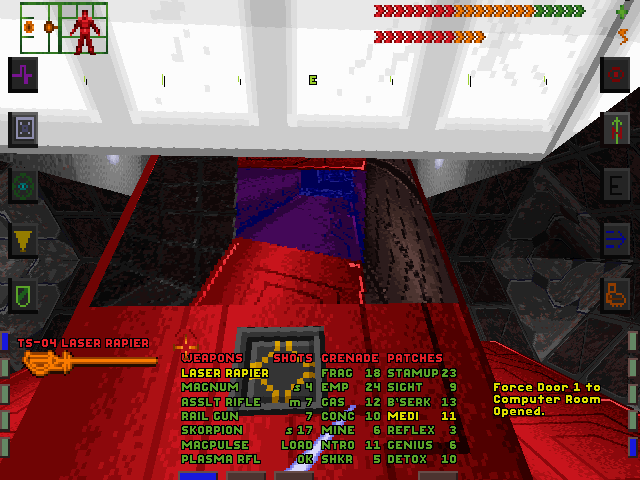 I find another one of these panels in a strange room to the south. There is a central area and with a load of niches around the side (most of which are closed). I have to run between niches killing robots and pressing a button in each niche which opens another (with another robot), until eventually the center raises giving me access to remove another force wall. 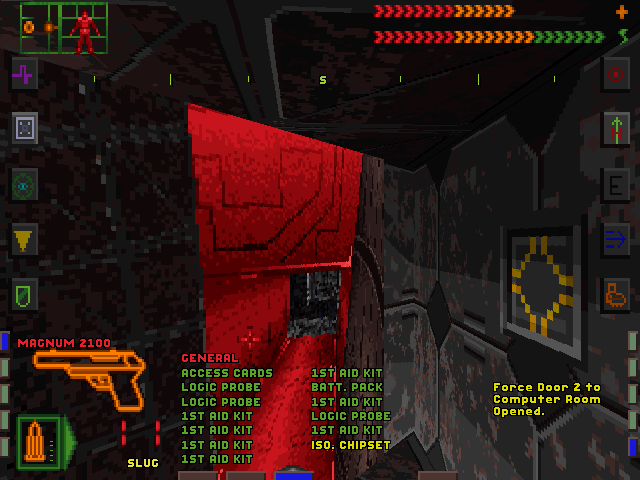 At this point I spent a while looking for the last screen which was in the first section I explored. I find it in the end and open up the remaining force wall. 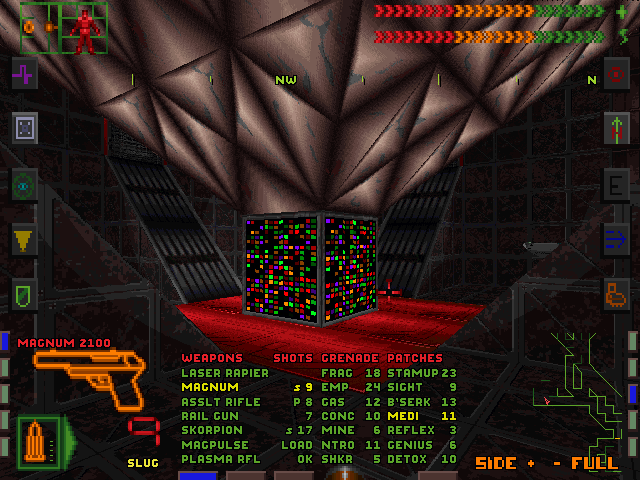 I’m half expecting a final battle with Shodan in this room but its devoid of cyborgs when I walk in. 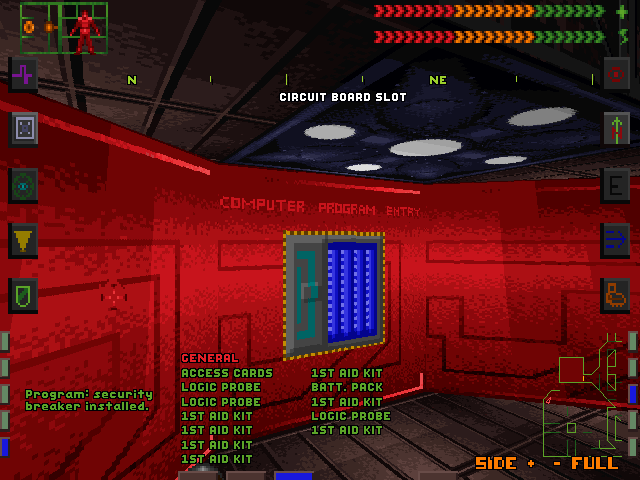 I use the isolinear chips on the panel and nothing appears to happen whatsoever. 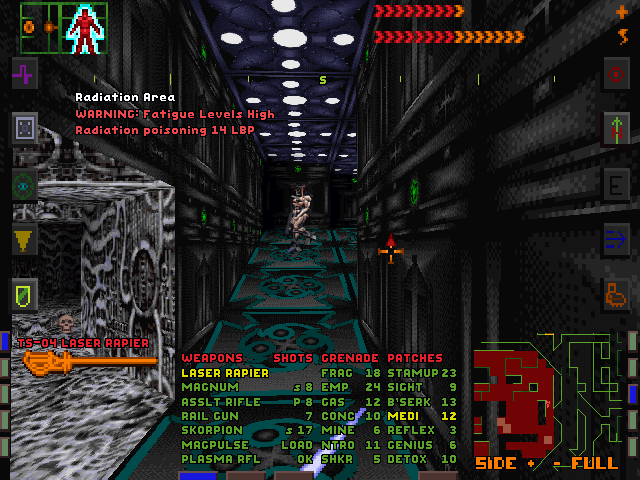 A bit more exploring and I realise the middle of the map has now opened up. There is a highly radioactive area full of yet more cyborgs. I use a reflex booster + a berserk and clear it out. 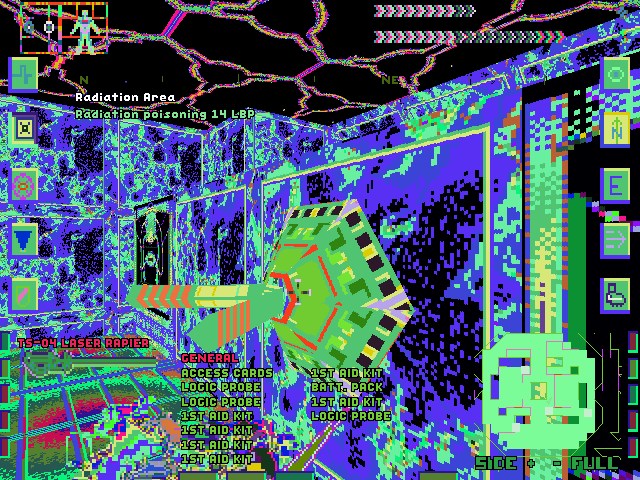 Right in the middle is a final cyberspace node which I use to begin my final battle with Shodan. 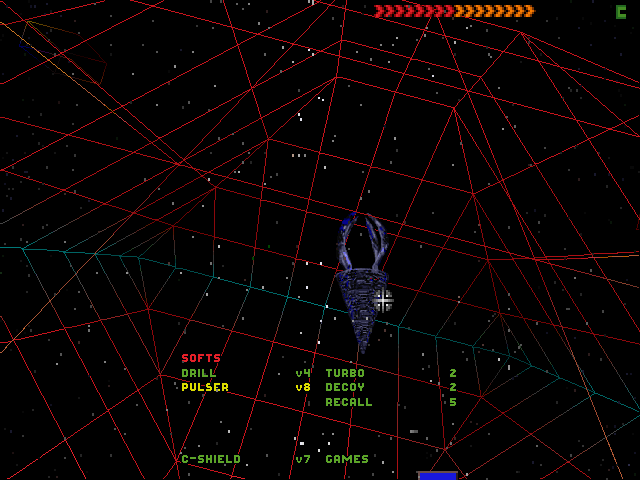 The final cyberspace area is the largest yet and much more complex that anything I’ve seen before. There are many alternate routes through and loops that lead you back to where you have already been. In the same manner as level 9 in the real world I can get upgrades for most of my software by exploring carefully. One my first attempt I stumble into Shodan nearly straight away. 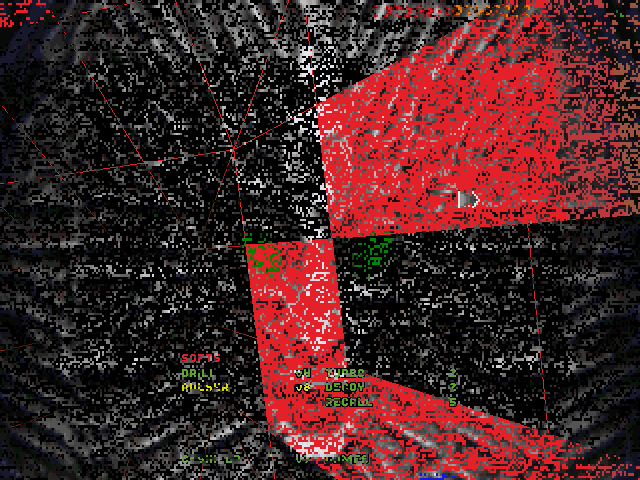 The final battle with Shodan is a little strange. I lose some of my ability to control direction and get pushed around while Shodan bounces around the room not doing much. All the meanwhile my screen is filling up pixel by pixel. 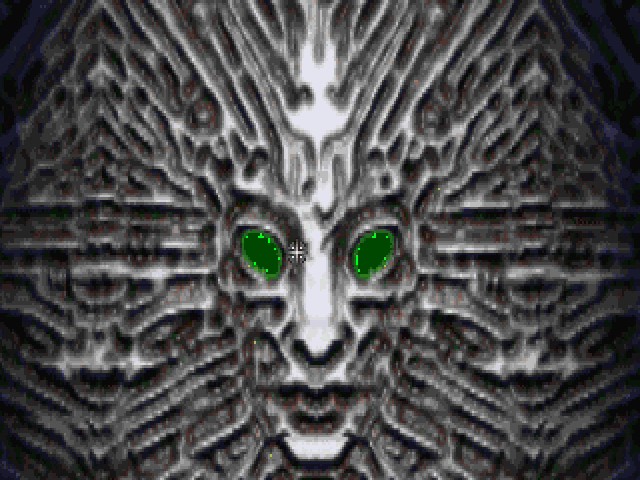 When the screen fills up I’ve lost the game and have to try again. Second time around I explore cyberspace a bit more and make sure I have the best equipment. I just fire constantly at Shodan this time and although there is no visual evidence I’m having any effect it must work as the final cutscene starts. 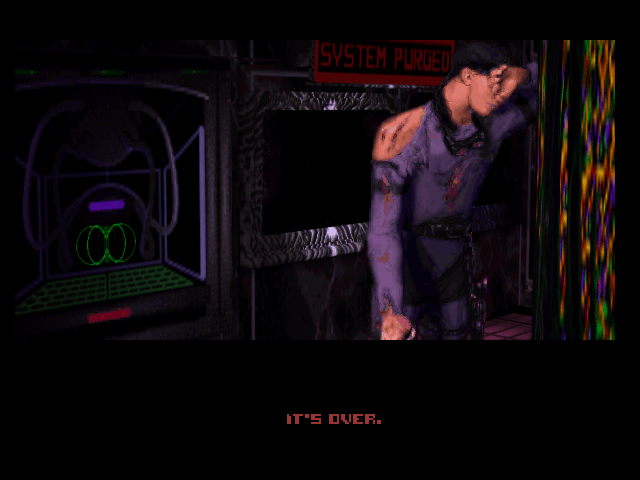 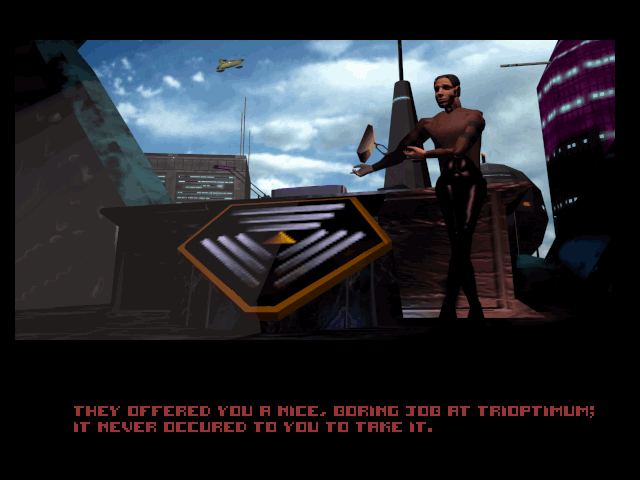 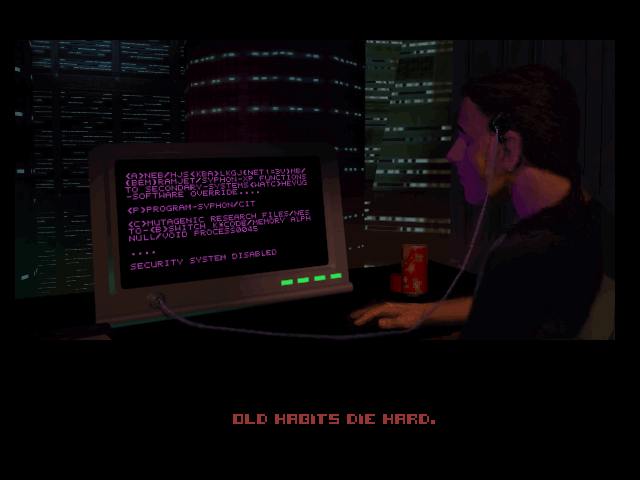 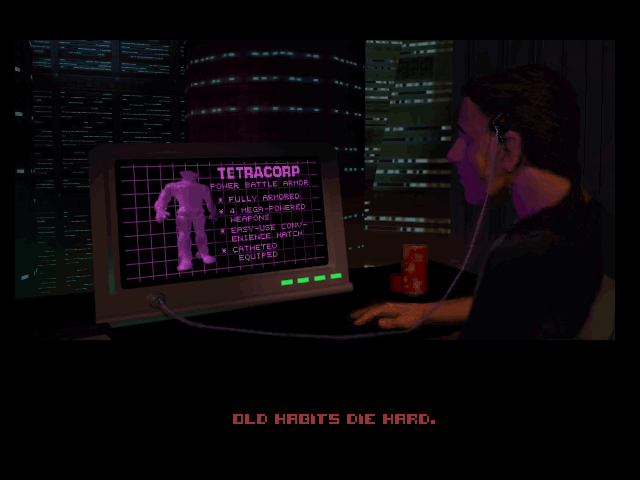 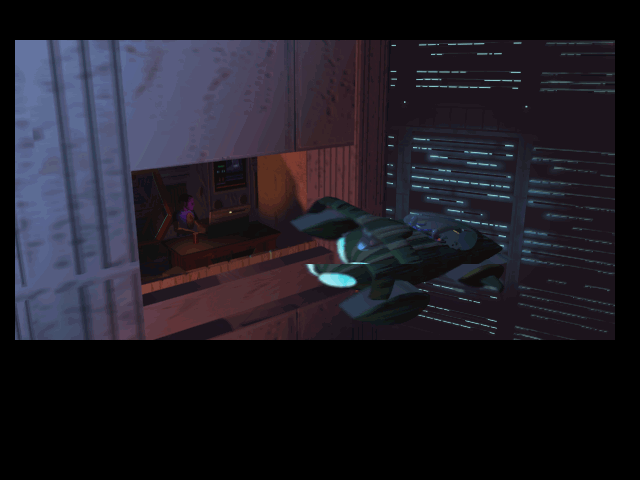 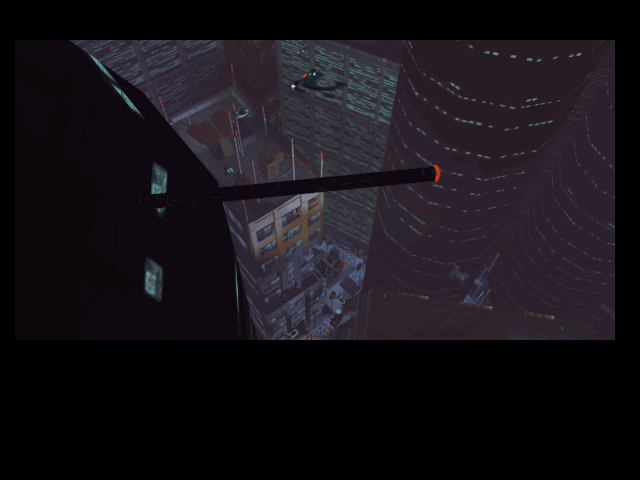 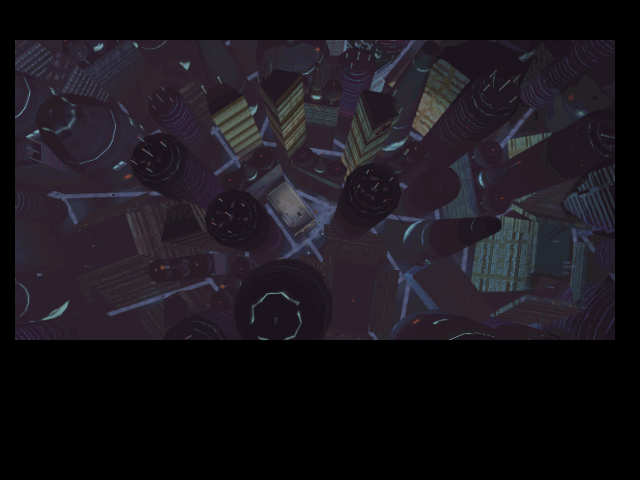 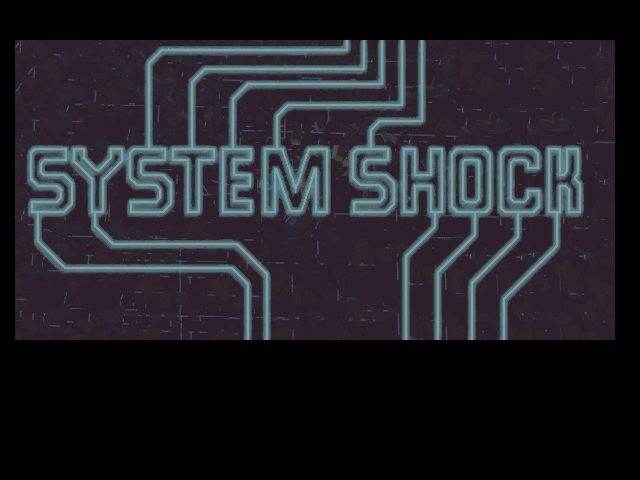 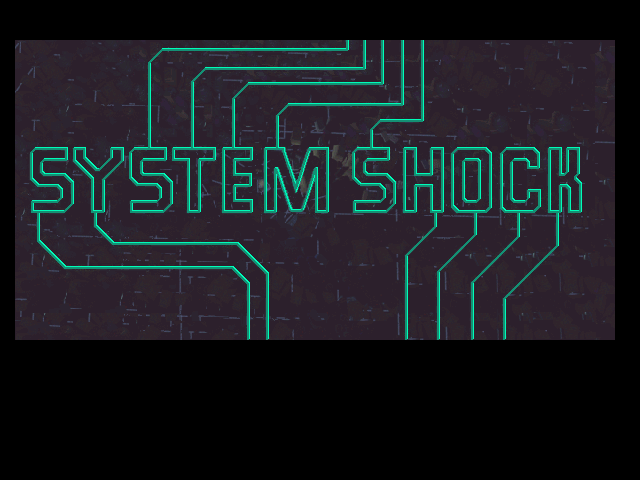 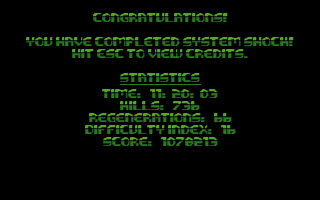 My reaction to the end of the game was a definite “Is that it?”. The final battle was a real anti-climax as was the cutscene which followed it. The rest of the game is of course more important than its ending but its nice to have a feeling of satisfaction when you’ve battled through the whole thing. The rest of the level leading up to that was decent enough however so things could have been a lot worse. I prefer this to the sort of ridiculously difficult final boss that you spend hours trying to beat (I’m thinking of Omikron here). I just expected a bit more from a game that had been so good up to this point.

It’s not going to put me off System Shock – I can see myself going back and playing this again at all the highest difficulty levels at some point but for now I’m getting straight on with the next game.