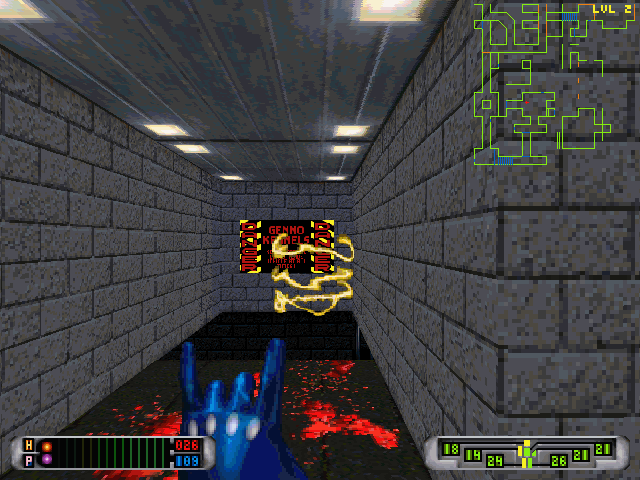 The next place I find is the Genno kennels. I was warned by the police chief not to go near these but the switch for the door needs a new fuse and I can safely assume its going to be down here somewhere. 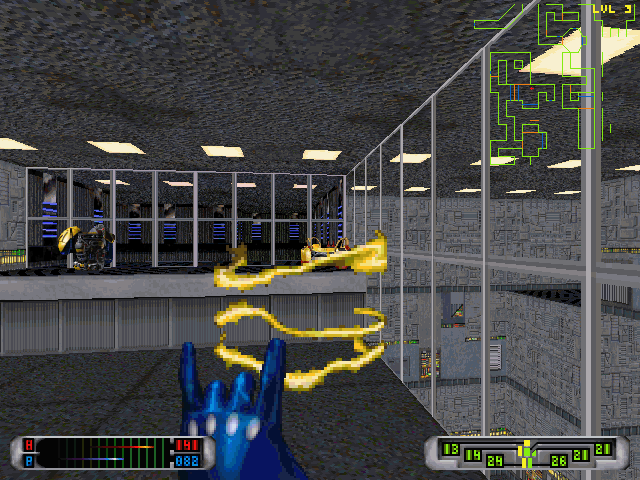 I find the worlds dumbest soldier down here who sees me and tries to open the door so he can get at me but manages instead to release all the Genno’s. The gennos have no range attack so aren’t too tough but they can take a few hits. I find my fuse nearby and this gets me to the area with the jumpjets 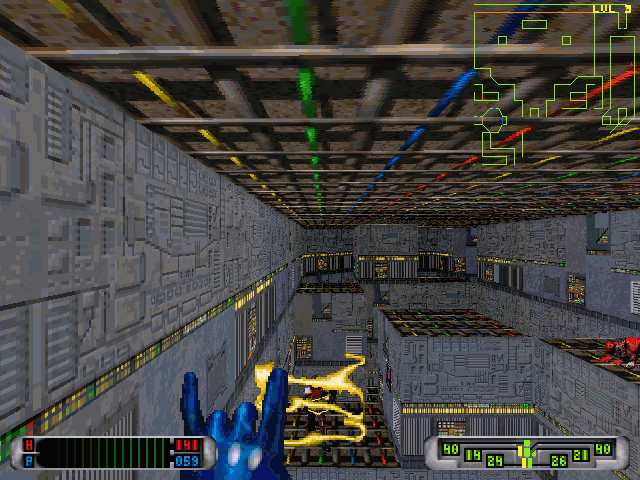 I was kind of expecting the jumpjets to let me fly around the level at will but instead they just hover me off the ground. I can move up and down a little but not much. The jumpjet training course is a load of ledges of varying heights and I have to make a route between them. I can’t jump while I’m hovering so I sometimes need to swap back to cross a gap. 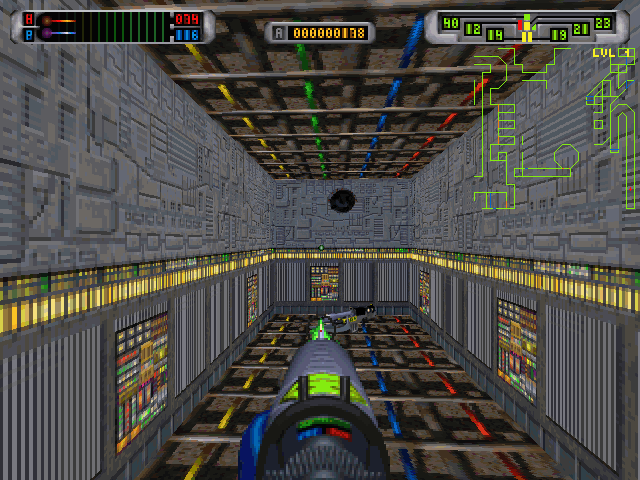 I find a secret area which is very well guarded by turrets and get a new blaster gun at the end of it. 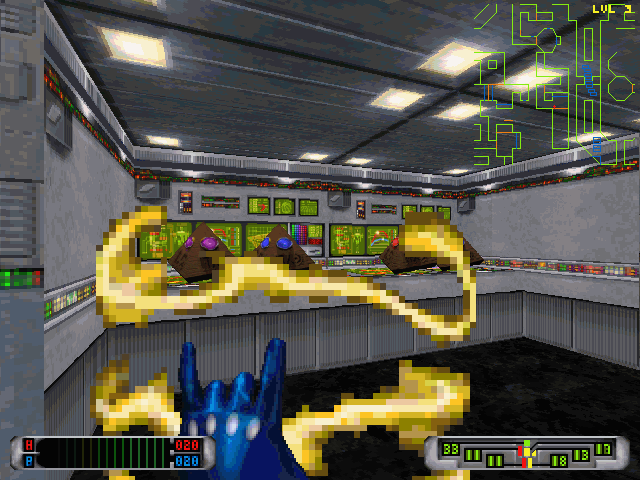 Theres another secret area off the jump course also with a stack of icons. Two of these raise my stats by 25 points each so this is well worth finding. 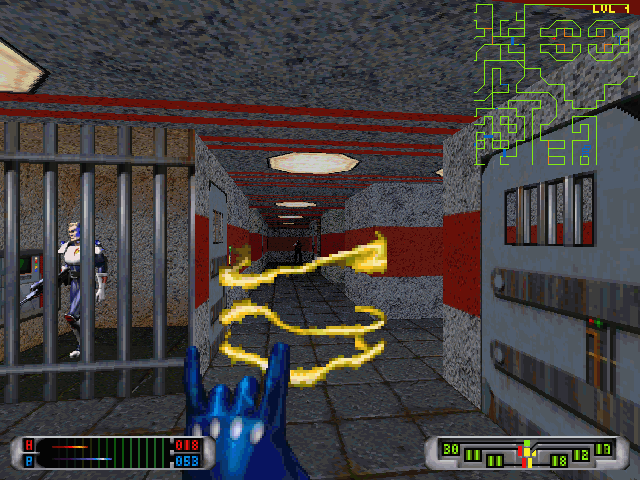 Just up from here is the high security area with all the locked up policemen. I work my way gradually up the building looking for an access card so I can let them out. 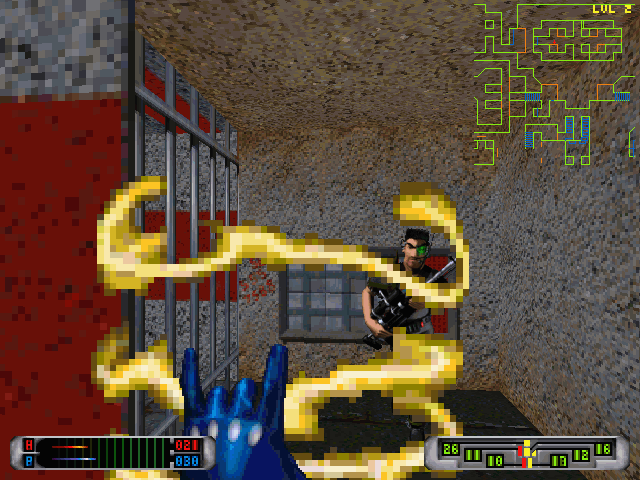 The first guy I let out is the husband of Lana (who works at Bliss). He wants me to go to a company called Sar-Corp and either find a device called the Damma-cron or blow the place up if I can’t find it. Necrom needs this device for some reason but I’ve no idea what it is myself. 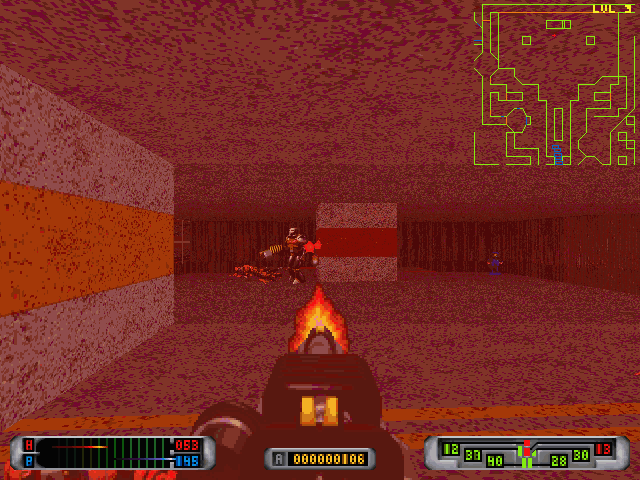 I work my way through letting out all the cops. The last one gives me an access code to open the way out. I explore the roof of the building first and run into this giant who fires rockets at me. I wouldn’t want to fight too many of these guys. I get his rocket launcher after the fight which should come in handy. 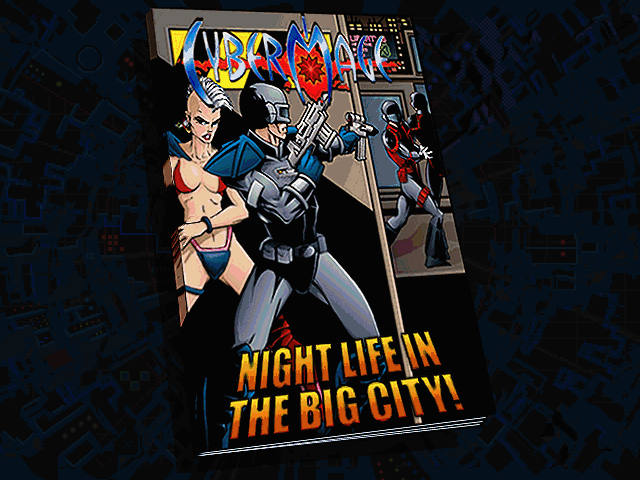 From here I make my way back to the exit and enter the city again. 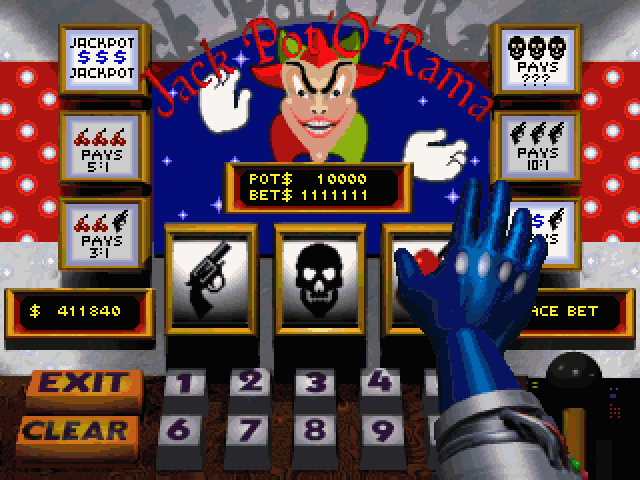 The city is much the same as ever. There are some new troops around but most of the areas I’ve cleared out are still safe. I picked up a bit of money in the last level and head for the gambling hall to try to raise it a bit. I have to do a bit of judicious loading and saving but I get lucky and my first win gets me odds of 24:1. Incidentally, this process has been made deliberately tedious by putting in a 1 minute delay before you can use the machine after the game is restored. I stick with it for 10 minutes while I answer some emails and end up a millionaire again. This means I can max out all my ammo, regen packs, etc and should make life a lot easier. 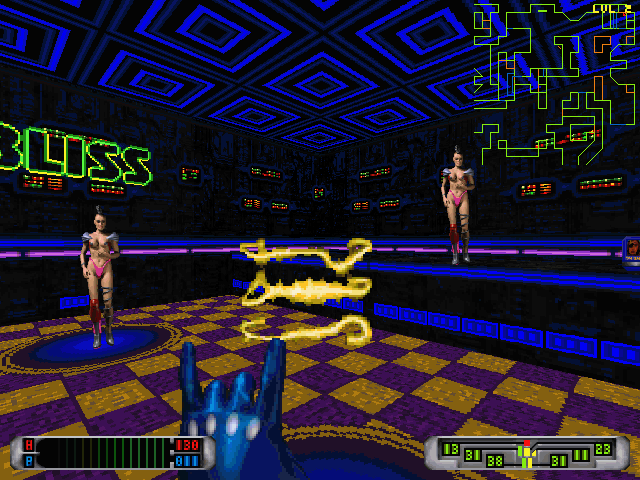 Back at Bliss, Lana is glad to have her husband rescued and sends me off to see Pawn again at Nex X who wants payment for his car which I’ve borrowed. 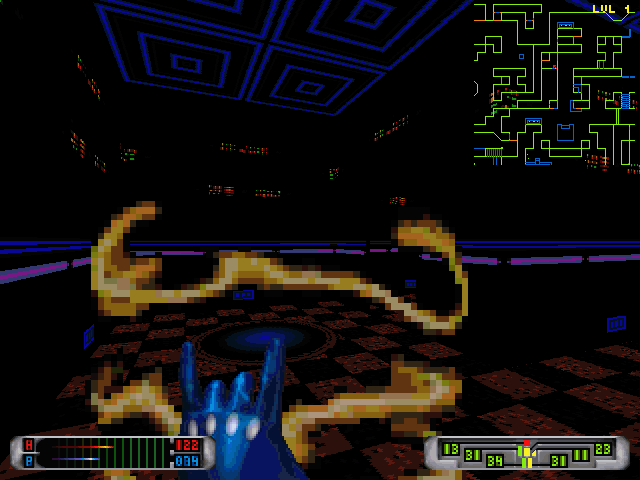 He says I can keep the car or whats left of it and sends me to another rendevous in the city plaza where I can gain the access card to enter SarCorp. 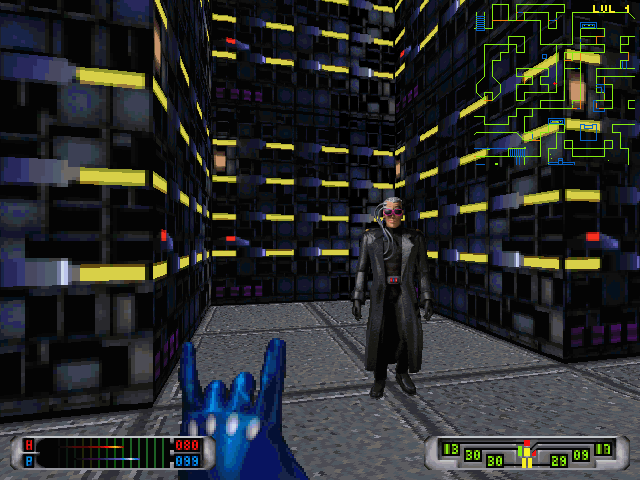 I find the guy I’m supposed to be meeting. He says something bad is going on at Sarcorp – there is some new sort of exotic called Slithers that are simply not human. He gives me the card and I head on in. 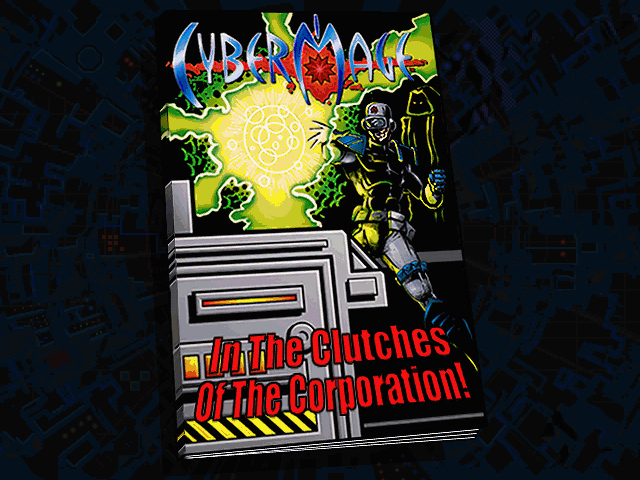 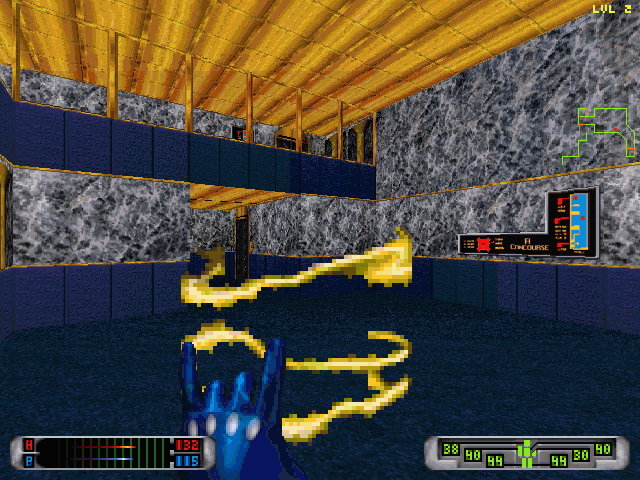 As ever the level has new textures, this time its supposed to look like executive offices. 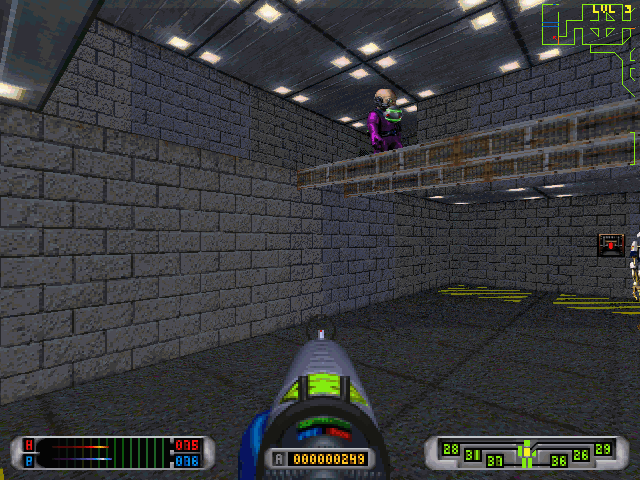 Its also got new creatures to fight. These little purple guys (who look exactly like Mung) throw hover grenades and also have a cloak which they sometimes use. They don’t take many hits but those hover grenades really hurt and can wipe out armor in no time. 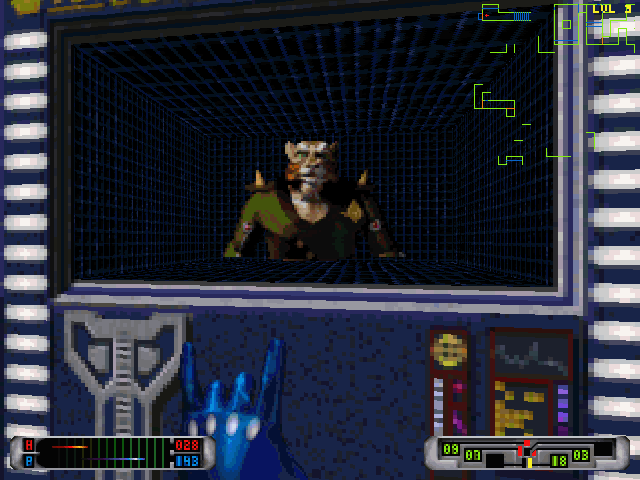 The early part of this level is based on a giant round central area surrounded by offices. I have to run between these offices collecting logs left by Katt and I can then play them back in his old lab. I find the first message and his lab right at the start. 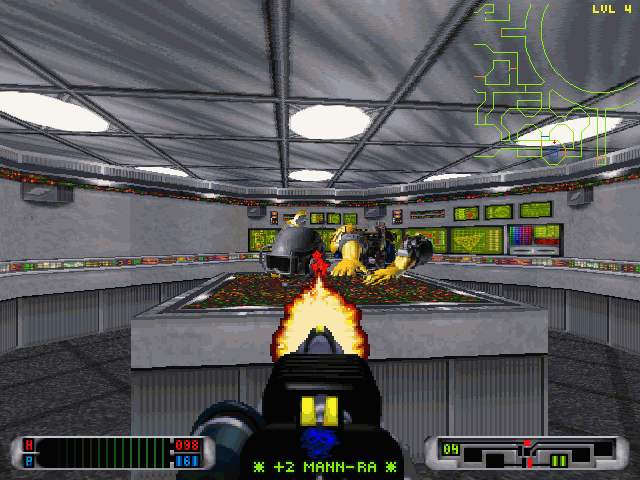 The area is full of secrets including a nice set of 60 strength armour. There are little secret buttons on the walls all over the place which I have to find to get these areas + the Katts logs.

I take the 8 logs back and listen to them all. There is some serious exposition at this point and playing the 8 logs back to back must take 10 minutes. I’ll sum it all up very briefly.

Katt is a scientist for Sarcorp who took over his current job when its previous occupant died. Sarcorp had discovered that alien life did exist and had even made contact with it. Katt’s predecessor wanted to tell the world about this but was murdered so Sarcorp could reap any benefits for themselves. This race of aliens is called the Sri-Feng. In return for their help, he set them up with a base on Earth – anyone who stumbled on them just assumed they were some sort of new exotic. They were, however, prepared to offer their knowledge to anyone.

The Sri-Feng have a natural ability to see the darklight and use its powers which we lack. They were prepared to tell anyone who asked about this ability. At some point Katt got suspicious about who was running Sarcorp and discovered the body of its director in his office in some sort of vat. It appeared he had been doing some sort of experiment to attempt to harness darklight himself. This body disappeared and was later reborn as Necrom – a dead being brought back to life by the power of the crystal on his forehead. He has no soul and Katt regards him as a weapon created by the Sri-Feng who are making a stealthy attempt to take over Earth using him as a tool to turn us against ourselves.

In an attempt to do something about this cat discovered that a second crystal like the on which gave Necrom his powers had been made by the Sri-Feng. He stole this and wanted to use it on a subject to create an opponent who could beat Necrom. In return for saving his life, I became this subject.

I’ve given the briefest of summaries here and probably missed half the story out – I’ve never known so much exposition crammed into one place like this but at least I have an idea whats going on now. 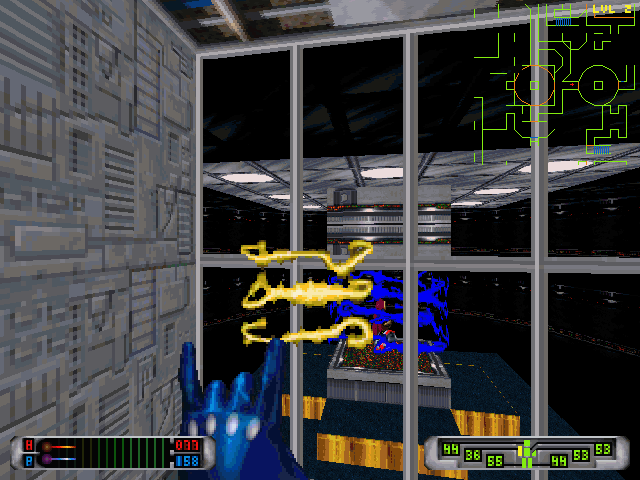 There are several lifts going off from this central area so I start exploring these bits now. I catch a glimpse of a hooded figure in a darkened room but can’t get to it from here. 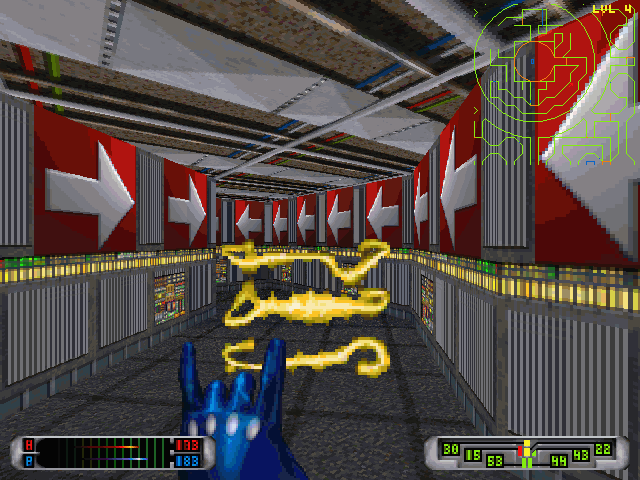 There is a lift in the middle of the central hub but getting to it is not easy. It involves pressing a series of buttons as ever but pressing one might block off the route to another so I have to keep returning until I open up the path. The correct path is clearly marked by a load of arrows. 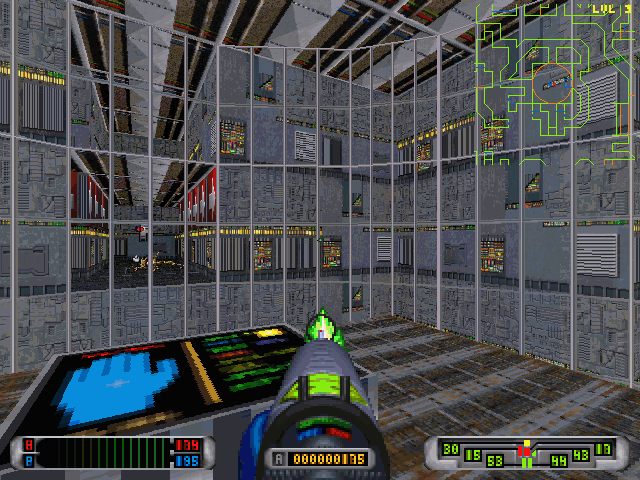 I get to the central lift. and the whole thing slides down. 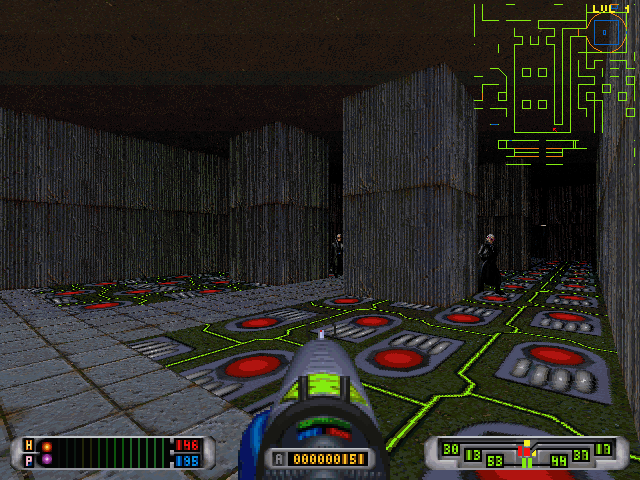 In this new area there is a strange floor surface which I later discover is a dampener for my cyber powers which leaves me using guns. I’m assuming I can go back to the city and restock on all my ammo so I’ve been using my guns most of the time anyway. 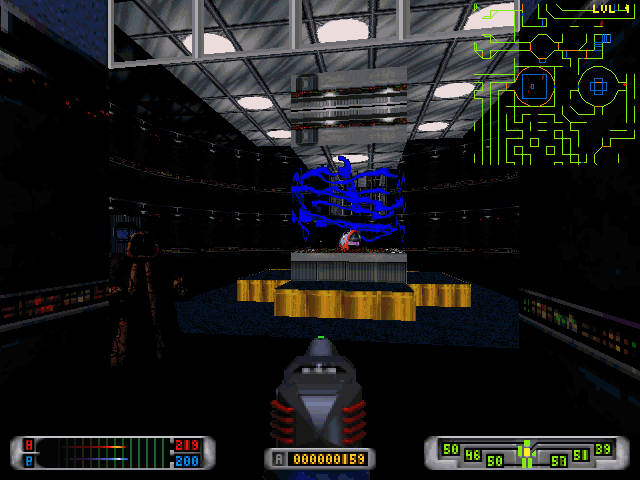 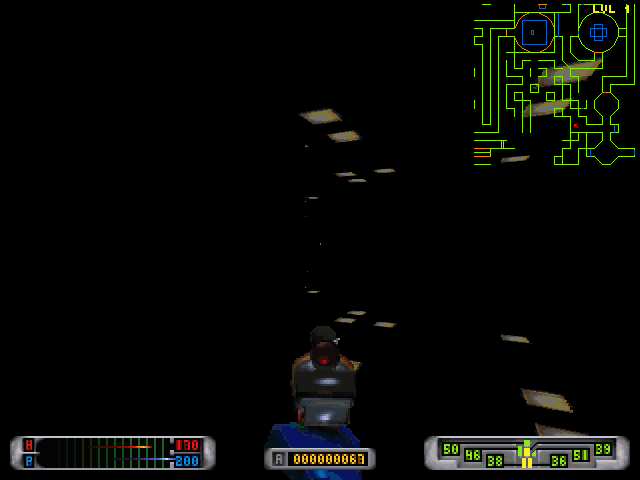 This gets me into the area with the cowled figure who turns out to be a Sri-Feng. They have been controling Sar-Corp for many years now and see me as getting in the way of their plans. I machine gun this guy and he dies eventually. The Damma-cron is in the middle of the room. I’m unsure as to what this does exactly. It looks like a helmet and I can use it but it seems to suck my psi-powers to me so the don’t go anywhere and I take damage.

I get to the end of the level from here. I pass a self destruct switch – I figure I’ll clear out the next area and come back to throw it at the end but I end up going up a lift with no way back and have to leave without blowing up Sarcorp. 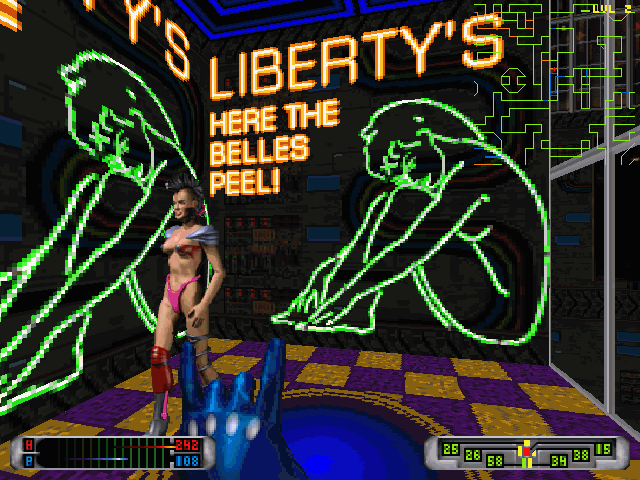 After a few meetings at the cities bars I discover that I’m supposed to go to the DMZ (Dead Mans Zone) next and get out of the city. I’ve been set up a rendevous with an escort – I just have to fly over to meet them. 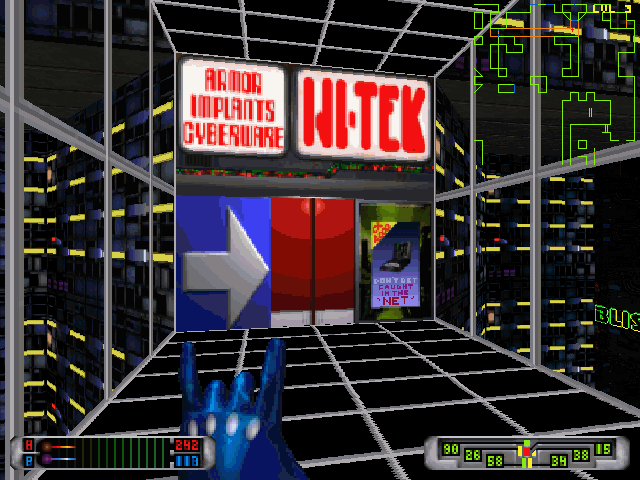 Before that I want to restock on everything. I find a new shop well hidden in the plaza section. I can buy a full set of 90 stength armour here which must be about as good as it gets in this game since there isn’t room for 3 digits. I can also buy armour seal and a repair for my car. Its quite slow buying each item, I can only buy one every few seconds – I’d be taking hundreds of armour seals with me otherwise but I settle for 60 or so. 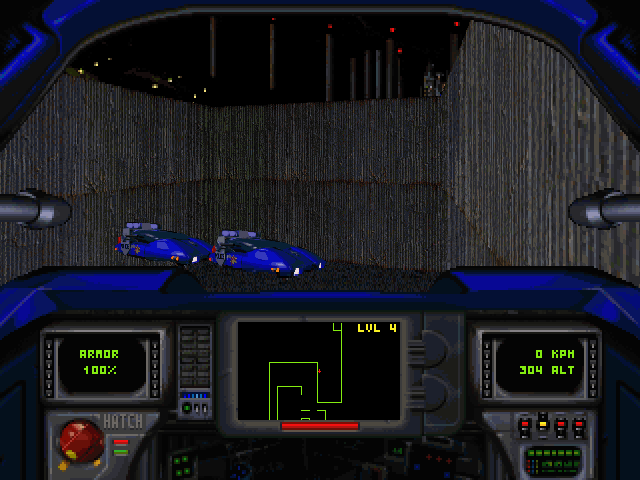 My escort is waiting. The moment we get through the door they turn on me + another couple of cars join in from the other side. I manage to fight them off but my car isn’t looking good. I end up gaving to kill another 2 on foot and climb down a lift to exit the level. 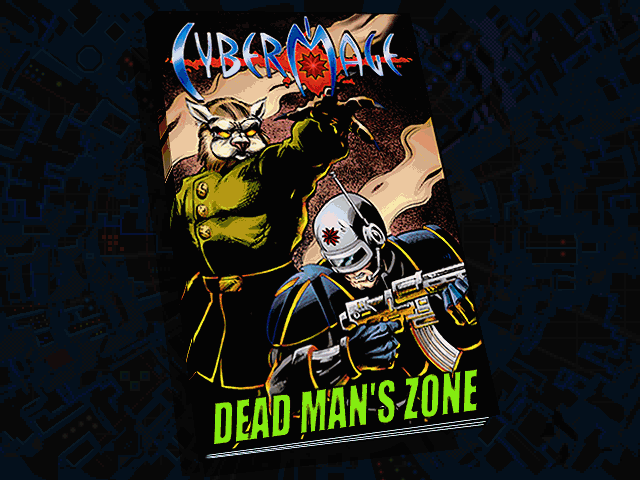 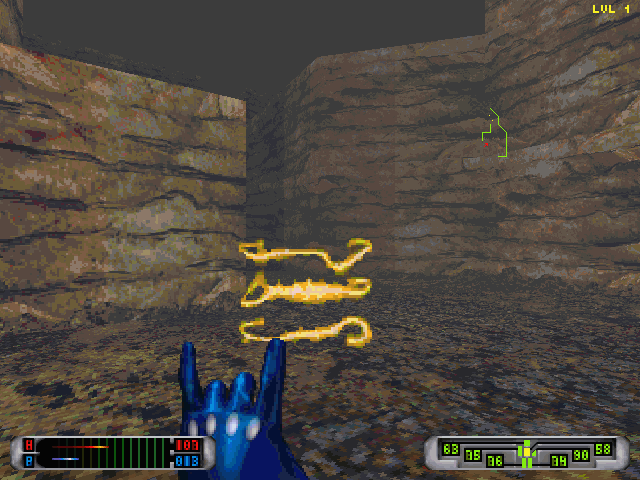 This gets me to the DMZ which I’ll be exploring later tonight.

It’s taken me a long time just to do a level and a half but I’ve had a couple of return visits to the city I guess which added some time. I’m still very much enjoying it but I will say that the storyline did feel a bit forced into the game at times especially with all those logs. I’m not the sort of gamer that minds having to sit back and listen to some exposition actually, but its not what you expect in the middle of a FPS. To be fair this exposition appeared to be entirely optional and if I’d wanted I could just have skipped it but that would be kind of missing the point.

Things are starting to make more sense now and the plot is coming together. I’d prefer to make some of my own decisions about what to do next, I’m being forced to go from one area to another. The reasons why I have to go to each area are not really clear. Right now I know that someone wanted me to escape the city but I don’t know where I’m going – I just know that I’m not supposed to fight Necrom yet, as my abilities are not as developed as his.

I thought that I’d get far enough last night to finish up this game tonight but thats clearly not going to happen. There may only be 10 levels in the game but they are so large it can take a couple of hours to do one. Right now I’m only halfway through but its getting a bit easier as my abilities improve. My maximum hp and mana are now 5 times what they were at the start. I’ll attempt to do another 2 levels tonight and maybe get to the end by Friday.