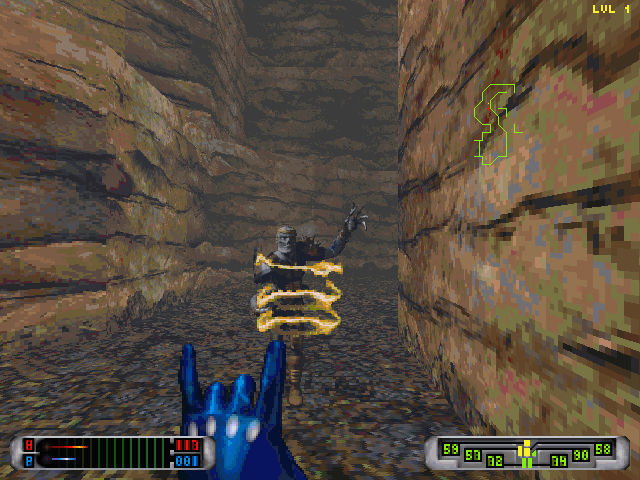 The DMZ is full of Necroms troops – they aren’t all that hard to kill but there are loads of them including these guys who have a particularly nasty range attack but die in a single hit with my lightning power. 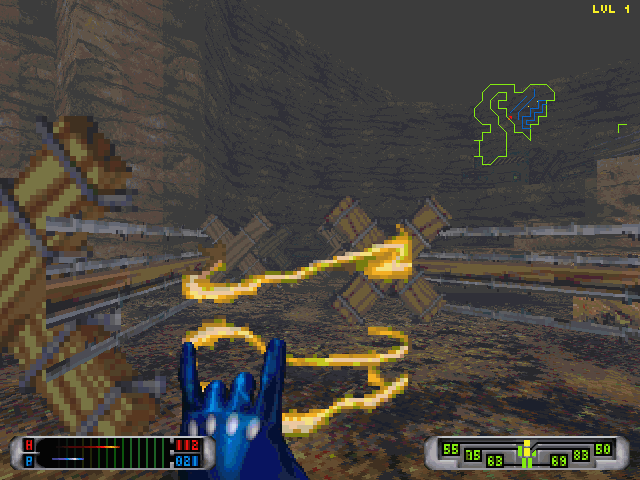 The DMZ is a war zone full of barb wire, fortified locations and the like. 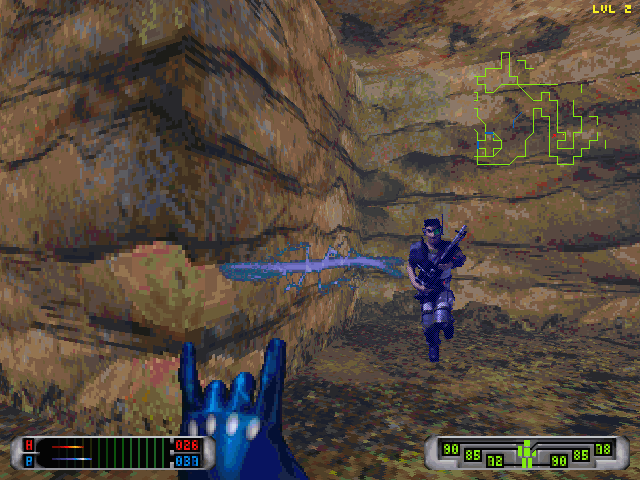 I run into Lana’s husband who I rescued from police hq yesterday.  He doesn’t tell me much other than to head for the outpost as Necroms men are planning something big. 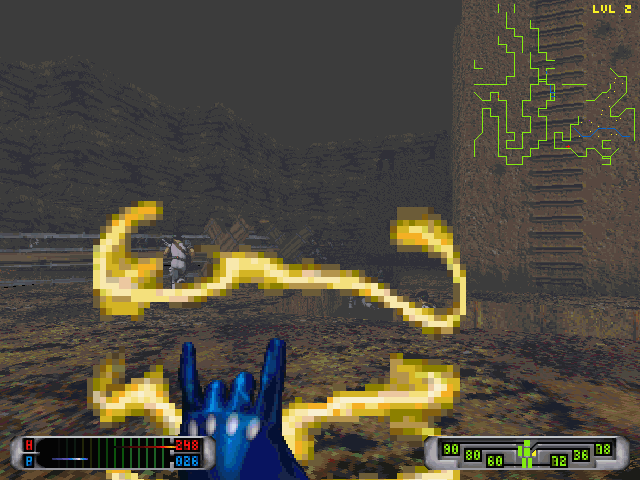 I’ve got a particularly poor screenshot of it here but the outpost is a real war zone with tanks trying to break through the barriers and all the good guys trying to grenade them from their trench. I help out a bit and we break the siege. 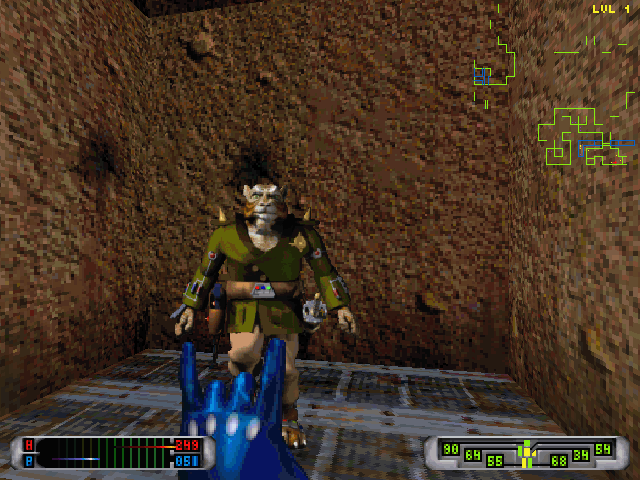 After breaking the siege I finally get to meet Katt himself who is commanding all the rebels out here in the DMZ. He tells me the Damma-cron is some sort of darklight neutraliser that I should use on Necrom when I meet him. It was intended to be used on me but the Sri-Feng have instead created the one weapon which can defeat him. He wants me to go to Necroms base of operations in an abandoned town at which point his troops will move in and seize it. 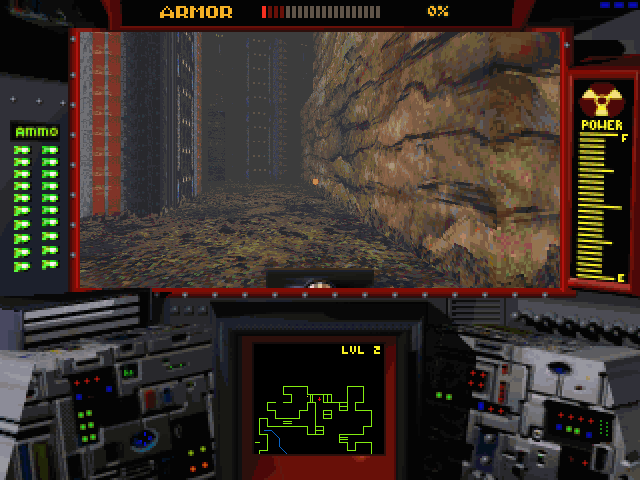 Before I can get to Necroms base there is an extremely well defended area I have to get through with trenches, turrets, tanks and locked doors everywhere. 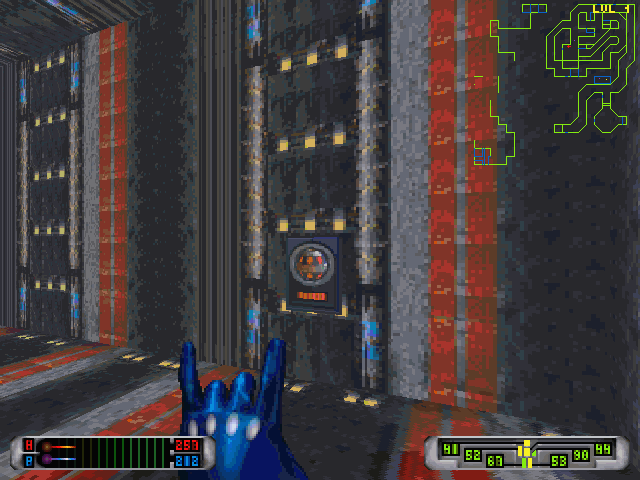 I have to run down the trench and collect a coders globe. This then slots into here and activates a load of lifts which I can use to get into guard towers surrounding the trench. 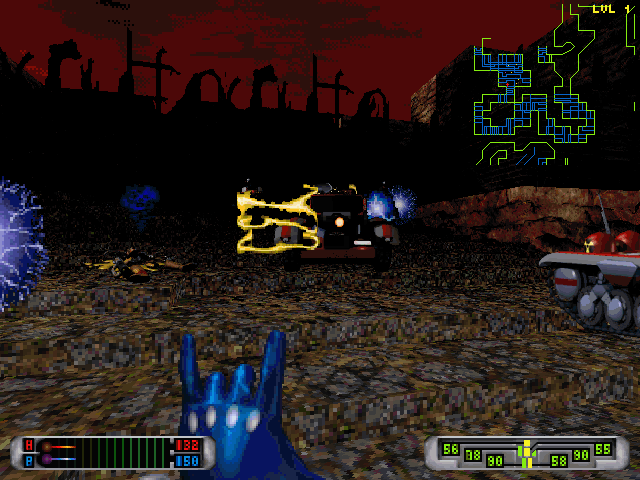 One of the guard towers has a level to get me into the next level. This is as well defended as ever and I’m fighting several tanks at once single handed. 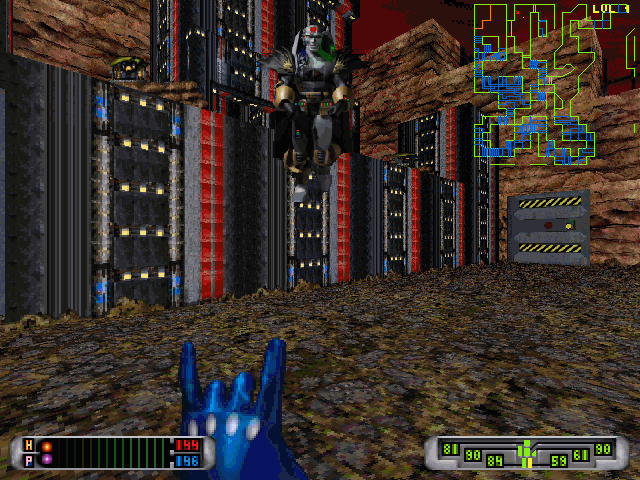 At the end I finally find Necrom himself. He seems to think that me being here means his plan has worked. 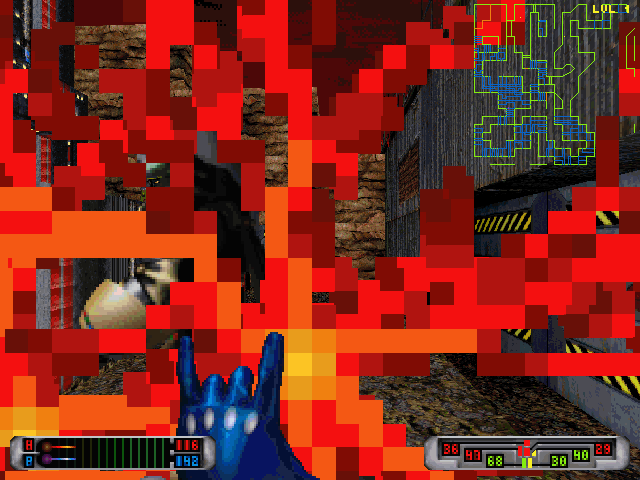 He changes him mind when I Damma-cron him and runs away and sets more of his men on me instead. 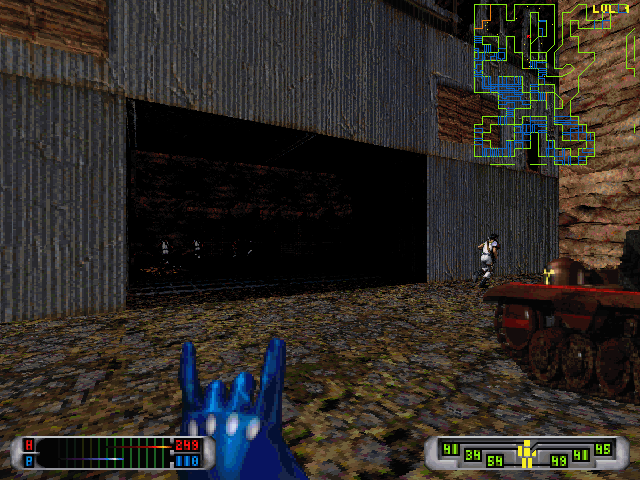 I find a switch to open up the big gate here and this lets all of Katt’s men into the base. 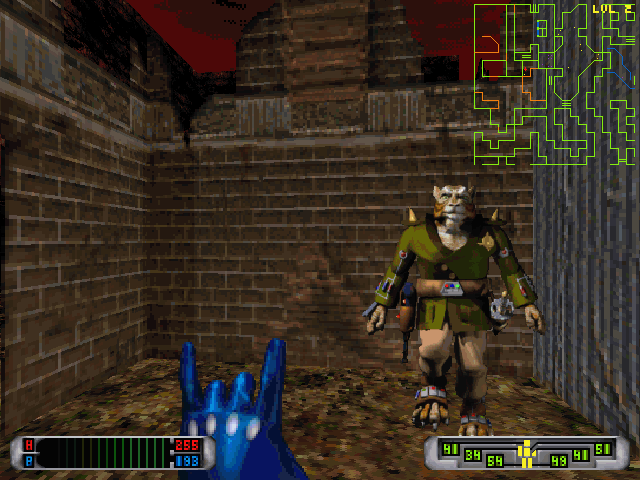 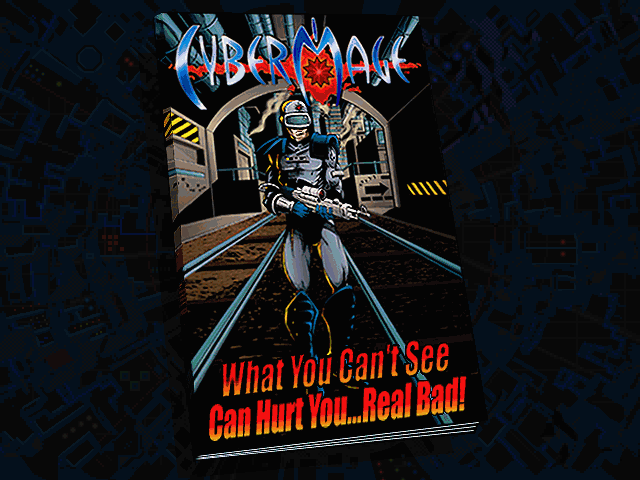 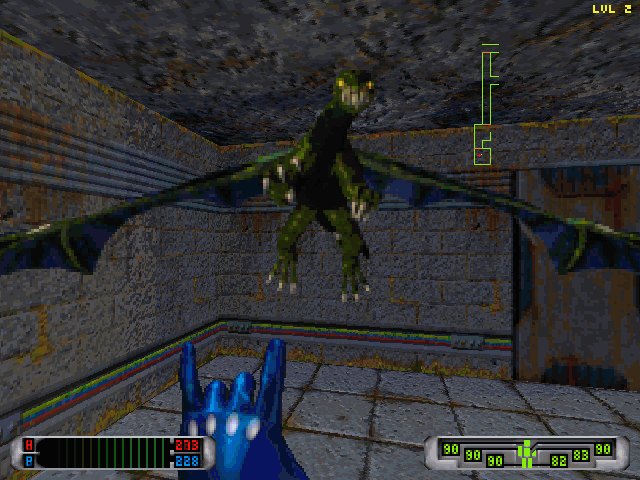 The level look very much like any subway but has more new things for me to fight including these flying lizards who throw fireballs. 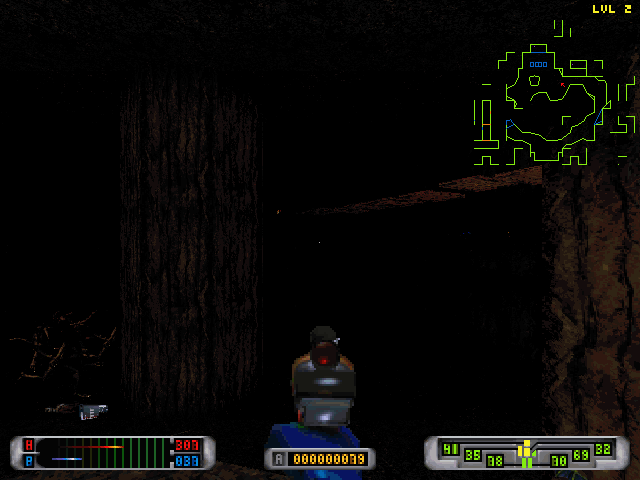 The subway soon gives way to caverns under the mountains, complete with this wobbly bridge which sways all over the place. This cavern is full of genno which I take out for the extra life force. 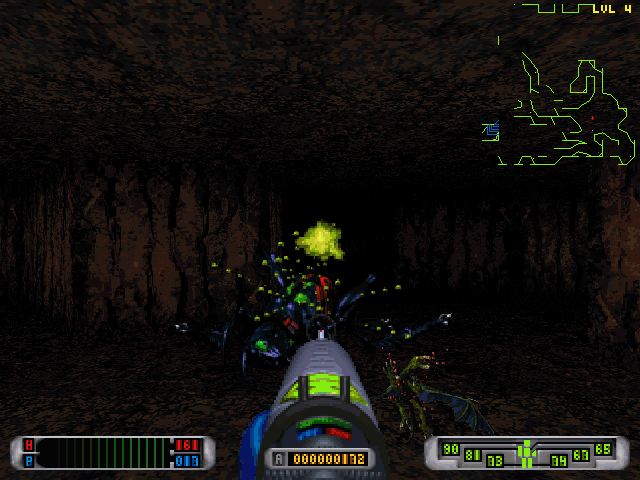 I also come across giant beetles which are extremely tough. They don’t even up my stats when I kill them either. 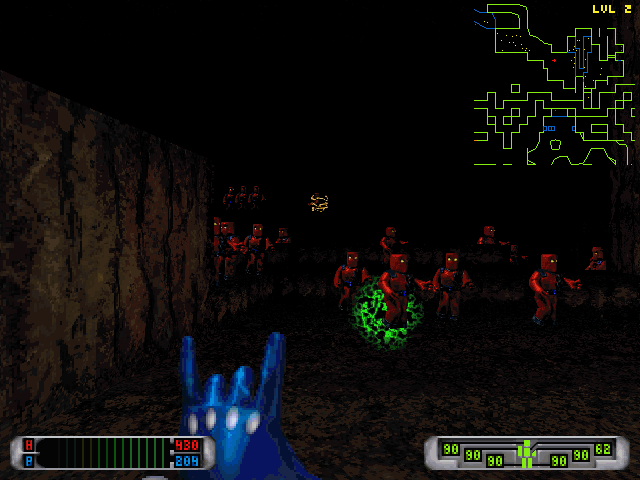 The caverns are largely featureless although they are big and full of powerups. I grab as many of these as I can and keep exploring until I find this room heaving with these little red guys.  I learn a new skill from them (luna light). The downside is that this means they are casting it at me. There is a switch which opens up the cavern to the genno. If I hadn’t cleared it out before I could no doubt sit back and watch them kill each other off but instead I’m stuck doing this the hard way. 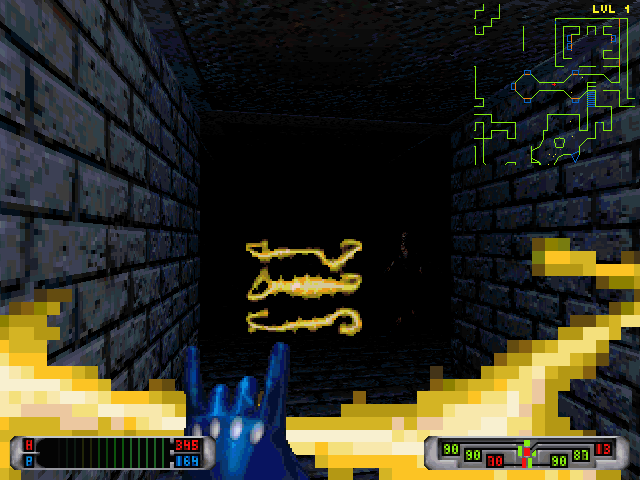 I climb some ledges around the room with the red men and fall down into a tomb full of ghoulies. 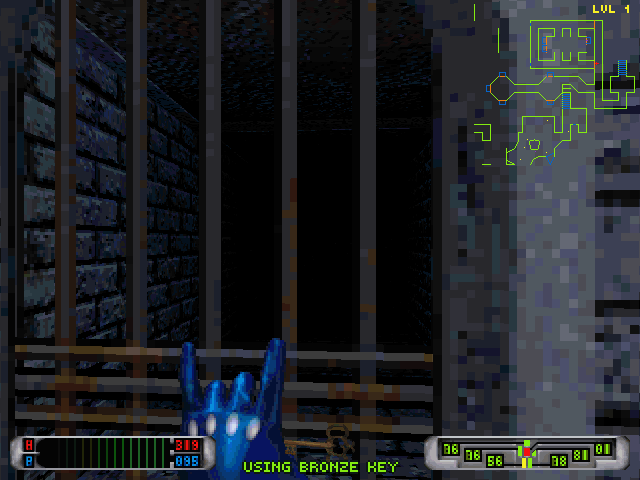 I find a secret button in here that gives me a bronze key. This opens up an area full of monsters. 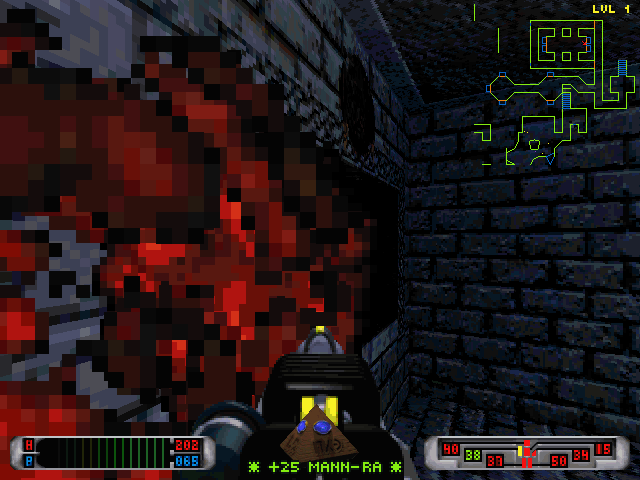 I also get a couple of +25 powerups for my trouble though. 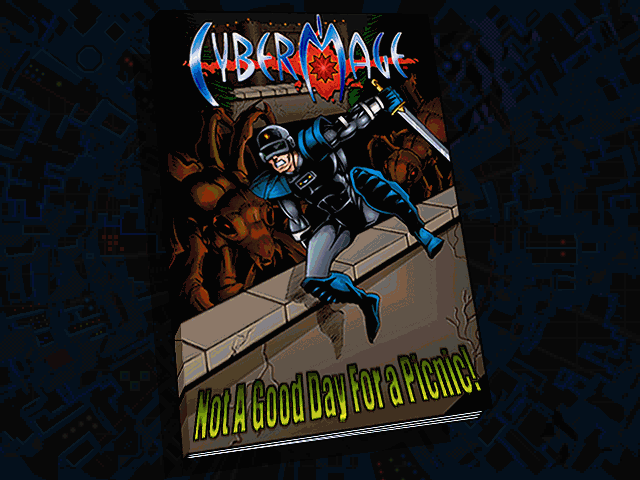 The exit to the level is just down from here. I climb a load of stairs and emerge in the unholy zone. 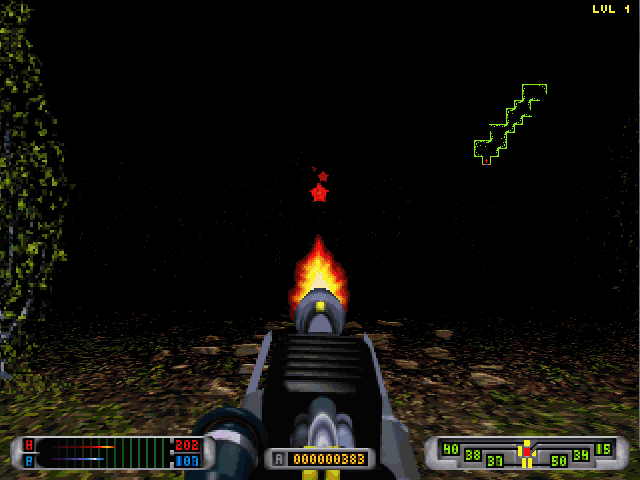 The unholy zone looks strangely pleasant – all green and leafy but I expect it seem so nice when I meet the locals.

The levels today have been a bit more run of the mill for an FPS, still fun but less interesting than some of the earlier ones. Cybermage doesn’t look to be quite the competitor for System Shock that I thought it might be early on but 3/4 of the way through I’d still rate it as the best 2.5D FPS I’ve played. Dark Forces or Duke Nukem 3D wouldn’t be that far behind but this is more varied and has elements that simply didn’t exist in those games.