I didn’t manage much time on Bioforge yesterday so this is going to be another short post. 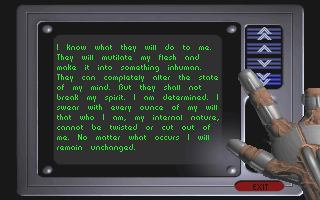 I figured out how to read the log I found. I guess its made by me before my surgery and states how I will remain unchanged no matter what. 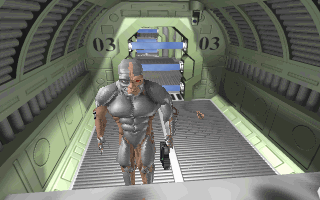 I don’t look that unchanged though. While I’m doing this I keep hearing chimes going off. 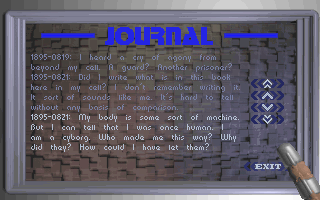 The chimes mean I have a new entry in my journal which automatically updates itself as I play the game. 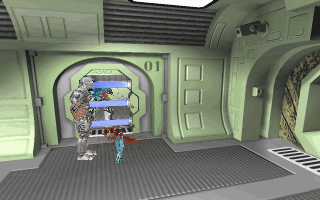 I make my way outside and a find a fellow prisoner in one of the other cells. This has to be the defining moment of Bioforge and is what I’d remember first if anyone asked me about the game. He’s lost him arm in the forcefield. I pick it up and he tells me “If you’ve come for the fork, you’ll be sorely disappointed.” 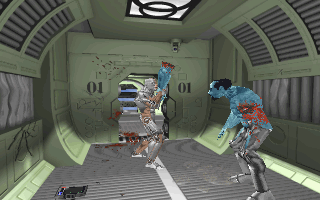 I go into his cell and the one armed blue guy attacks me. I beat him to death with his own arm while coming out with lines like “We should be working together” over and over again. 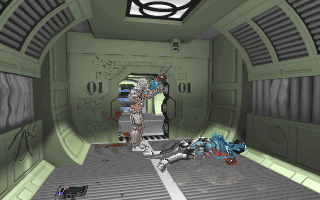 After the fight, I stand over the corpse and say “Sorry friend, we are both victims here, you and I”. I don’t know if Origin were going for laughs with this scene but both the dialog and the acting are pure B movie cheese. There can’t be many games where you beat someone to death with their severed arm in the first five minutes either. 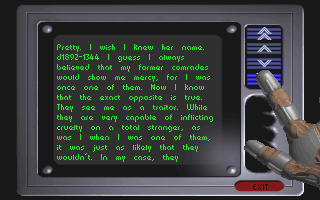 I find another log in this cell. This bloke used to be a security officer here but committed some sort of offense and has been turned into a cyborg as punishment. The log shows how his mind deteriorated after the procedure. 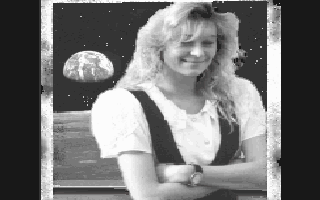 He had a photo with him but can’t remember in his log who it was of. 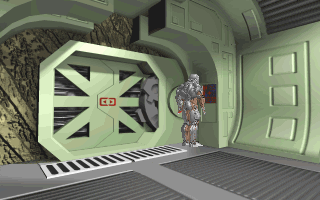 I take the all important fork and leave the cell. There is a locked door outside and I prise the panel next to it open with the fork. 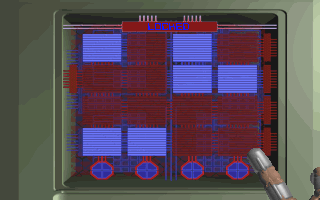 There is a simple puzzle now to connect a circuit and unlock the door. 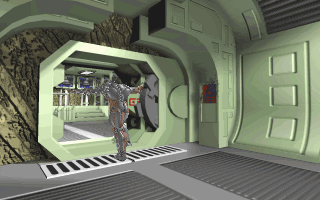 Once unlocked, I push the door open. This is a strange mixture of 3D and pre-rendered graphics and looks a bit like when a cartoon character gets laid on top of a movie as the doors don’t quite move at the right times. 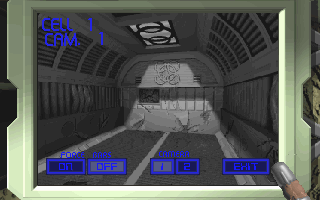 This gets me into a big control room. There are a load of screens I can look at and use. Some of these turn off the forcefields in the cells although I need security clearance for one of them. 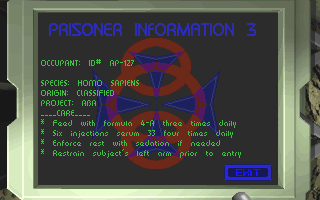 There is also a screen with information on each cells occupant. I find the one relating to my cell which doesn’t tell me anything about myself except that anyone entering the cell should restrain my left arm? 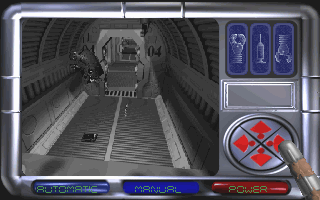 There is a final panel which controls a medical robot – I’ve no idea what to do with this thing yet and will figure it out tomorrow. I’ve got a few new cells I can go in now as well. All the time I was in here I heard a conversation over the speaker system about there being an escaped prisoner in the guard room (me), and how a dropship of marines was on their way in to deal with it. If I didn’t remember otherwise, I’d be expecting them to turn up at any minute but I won’t be seeing them for a while yet.

I’m going to get at least an hour on this game tonight and see if I can’t make some real progress. Now that I’ve started, I’m realising that I don’t remember it all that well after all – I’ve probably not played this game since about 97. I remember a few of the puzzles and the general plot but none of the details. What I’ve seen has aged well and the detail on the models is as good as there is any point in doing in VGA. Walking around the static backgrounds works fine and was a good way to get a 3D element onto PC’s that weren’t really ready for anything better. I prefer my adventure games to be point and click, and without the combat but I’m still going to enjoy replaying this.