Descent Freespace has been keeping me busy most of this week and I just finished it last night. I did enjoy the game but have to say I was expecting a bit more. It never quite managed to suck me into the world with either the story or gameplay and came across as a Wing Commander/X-Wing hybrid that didn’t capture the magic of either. I don’t want to be too harsh, there were plenty of good aspects and I went into it with extremely high expectations which never helps. I certainly liked it enough to move onto Freespace 2 which I’ve heard is the best by a distance. Like many other gamers I’ll be playing the new Bioshock next though which may keep me busy for some time.

In the meanwhile I thought I’d share some videos I found on Youtube the other day. These are old news having been up there for 5 years but were new to me. They were uploaded by former Origin QA Jeff Morris who has put loads of videos of Origin cinematics onto his channel. What caught my eye in particular were two videos with footage from the unreleased Bioforge Plus.

I know precious little about this game. A full sequel was originally planned but this was dropped in favour of the speedier option of tacking an extra adventure onto the end to conclude the story. The team responsible were given just 9 weeks to create this which sounds ridiculously little but they did manage to get to beta in 10 weeks only for the project to ultimately be cancelled. The first video shows the entire intro for the game with Lex landing on an abandoned spaceship. In the promotional material on some of the old electronic Origin catalogues it mentions that the ship was called the Black Raven and was sent by the Ministry of Security to spy on the Mondites. I could only speculate on the rest of the plot and would love to know more if the information is out there somewhere:- 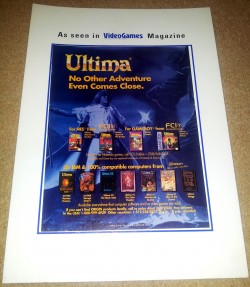 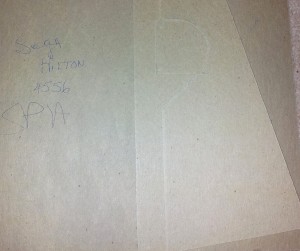 I’m not in the habit of advertising on here but I’ve been given the chance to buy some more Origin memorabilia of the sort I’ve been slowly posting on here in recent months and the fact is I need money and plenty of it. I’ve already posted a splendid Bioforge standup store display on this blog. Let me introduce his twin:- 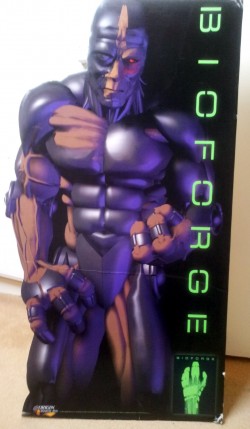 It has to be said that this Lex looks more world-weary than his brother but he would still make a seriously nice addition to any collection. He’s about 4.5 foot tall and I’m selling him on Ebay for the lowish starting price of £39.99. The airport fees alone on the parcel he came in(without shipping or VAT) were more than double that and I can more or less guarantee you aren’t going to find another in the UK. Any money I make, along with plenty of my own cash, will go towards more Origin development doc’s and the like which I’ll share on here in due course.

I’m not convinced I’ll get any takers but if you are in the UK and feel the need to decorate part of your house with a meter of cyborg, and I can’t think of reason why you wouldn’t, then a bid or two would be greatly appreciated.

This review of Bioforge comes from the May 1995 PC Format. They clearly loved the game with the only complaints being occasionally getting stuck and the linear nature of the story:- 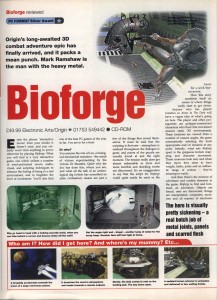 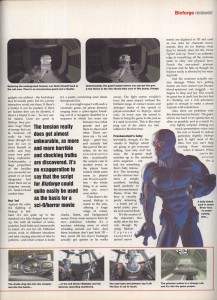 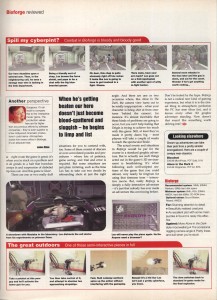 Also from the same issue, a brief mention of Cybermage and Crusader debuting at ECTS. They question the decision with Cybermage to release another Doom clone and in hindsight they were probably right but it was still a great game even if hardly anyone played it:- 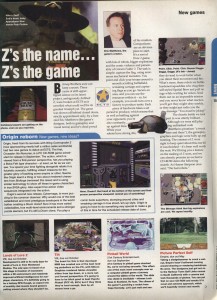 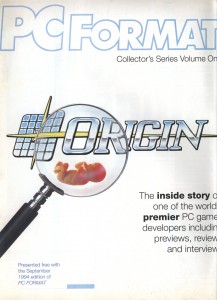