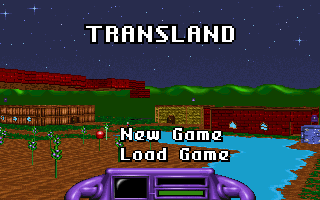 This has to be one of the lesser known efforts from Origin and is the result of several Origin programmers who were learning 3D programming. It’s not a finished game as such and was released for free back in 1996. Since it’s freeware, I’ve put it up for download from https://www.pixsoriginadventures.co.uk/Transland.rar It runs fine in Dosbox although the controls are a bit sensitive if the speed gets too high. 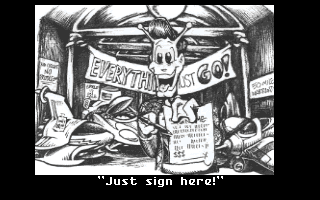 The intro uses some well drawn black and white stills to set up the very basic story. You  just bought a spaceship then crash it and land on Transland and you now have to find a way off the planet. 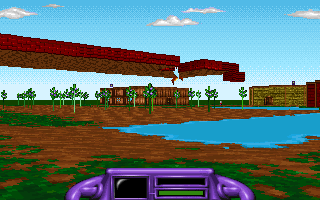 The game is a 3D action/puzzle game and graphically it immediately reminds me of Shadowcaster. 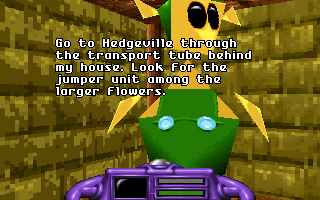 Unlike Shadowcaster, the world and all the characters in it appear to be in true 3D. The world itself looks to be tile based with everything in squares but it is possible to go under and over things. There are three houses in this first world, each with a different character in them named after the type of house they are in. In RPG style they each have quests for me but I have to do them in the right order. Strawface sends me off to look for a jumper unit in Hedgeville. 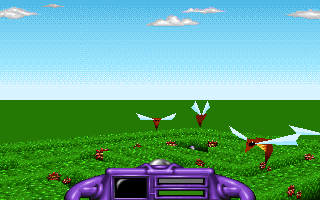 Stepping on the teleporter at the back of Strawface’s house transports me to Hedgeville. This is a giant hedge maze unfortunately. I start off on a highpoint overlooking the whole thing but I have to drop down into the maze and aimlessly wander around looking for this jump unit. 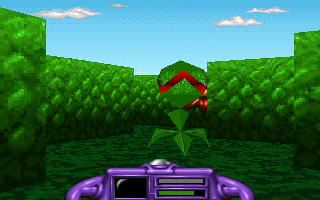 There are some Little Shop Of Horrors rip off’s in the maze. I have a very weedy gun to shoot them with. There isn’t much I can do here in the way of strategy and the plants don’t actually move. I just have to stand there and blast them as quickly as possible. 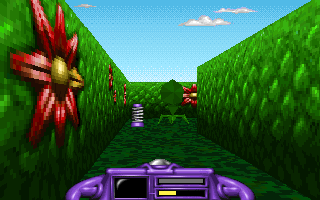 After a lot of turning right at every junction, I find the jump unit. This allows me to jump up one block and I bounce my way back to the middle of the maze and return to the opening map (Startsville) 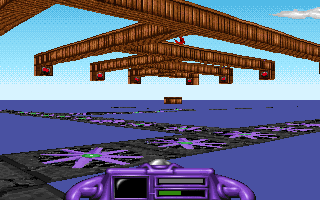 This time, the guy in the wood house sends me to Waterville. This is a strange map where I initially have to press buttons high up in the air to turn on fans. If I’m walking over a fan then I float up to the underside of the wooden platform above and can reach these buttons. Each button turns on more fans so I just have to work out the order. 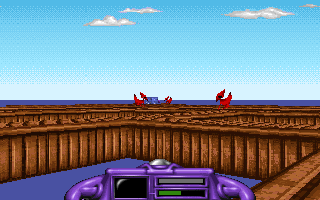 With all the buttons pressed I can get up to the top level of the map. Little red dragon things are guarding the path. I can’t see any way to fight them except standing and shooting. I die in the middle of this but there appear to be unlimited lives in this game so it’s not a problem. I just start back at the beginning of the map and have to walk back up here again. 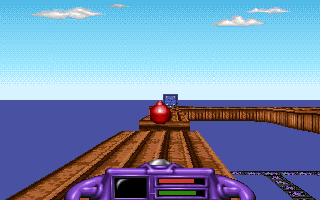 When I get to the end, there is a blue box with a panel which I can’t remove without a specific tool. I’ve seen one of these in each world so far. There is also the gun I’ve been sent to find. This gun is powerful but has limited ammo. 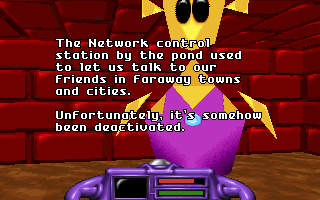 I head back to Startsville once more and the final character sends me off to Iceville to find the panel remover. 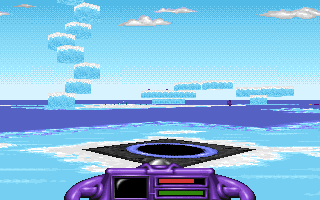 Iceville is the most dangerous of the worlds. I can swim across water but I take damage rapidly while I’m doing so. This makes getting around here problematic as the ice is split into floating islands. 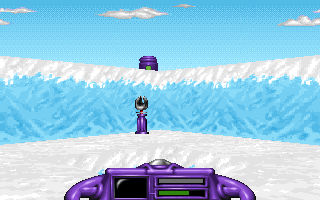 After some exploring, I find the panel remover hidden away in a recess. 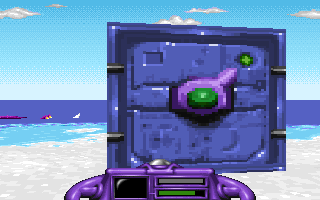 While here I take the opportunity to use it on the panel and flick the switch that is underneath. I learn that I have to do this in all the realms to restore communications. 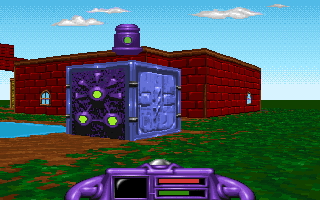 A few trips later and I have the communications hub working. 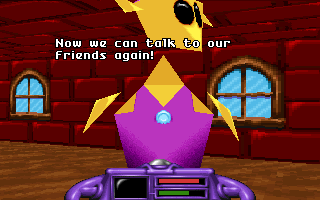 And that appears to be the end of the game as far as I can tell. I can still walk around the world but I’m out of quests.

I finished this game in 20-30 minutes so there isn’t a lot to it. It’s a bit of fun and more polished than I would have expected, considering what it is. It could have done with some sound. I notice the game has a sound config file at any rate but there are no instructions on how to set this up so I just got silence. I couldn’t exactly recommend this game to anyone but I enjoyed playing through it while it lasted.