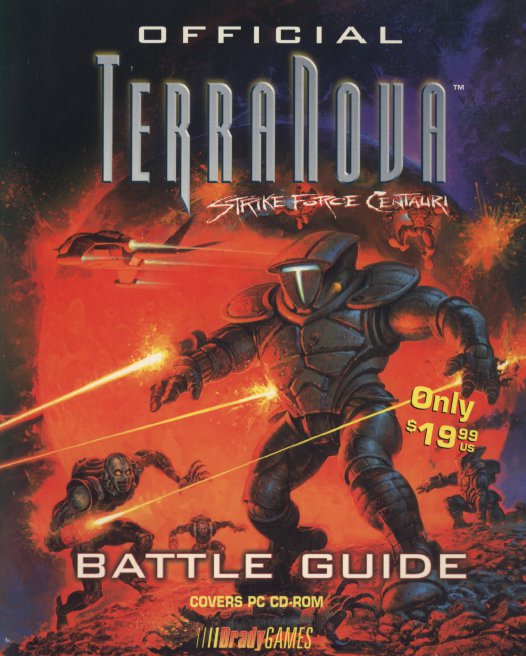 Terra Nova has to be one of the less famous Looking Glass games, although I’m sure more people remember it than their golf game from the following year. Despite this, Terra Nova was in development for around 4 years going right back to the time of Underworld 2 as I understand before finally reaching stores in 1996.

It’s a mech FPS game that had the potential to be quite a strategic title, with plenty of options for commanding your team mates and using differering tactics for each mission. In practice, this only came into play in the later stages of the campaign and it’s more of an arcade game.

The FMV between missions was a late addition in response to games like Wing Commander 3, and this showed in the weak plot which was my main criticism when playing the game for the blog. Whatever the flaws, the main campaign was still great fun and I wish I’d played it back when it came out instead of 15 years later.

The guide was published in 1996 by Brady. It’s shorter than the usual Prima equivalent but we do get some colour at least on the inside pages. It starts with a few chapters about the history of the game’s universe and the clans of Terra Nova. Very little of it came across in the game, but there is a reasonably detailed summary behind the games events.

Next it’s the obligatory chapters on teammate bios, weapons, opposition stats and general hints. The tactics section is for the most part obvious things about sidestepping to avoid fire, and drawing out a couple of the opposition at a time. I definitely didn’t use my jump jets as much as suggested here. They recommend using them to move in short jumps so you go bouncing around the landscape at speed.

As ever the mission descriptions take up most of the guide. These have maps, specs of the opposition, the briefing, and a step by step walkthrough for each mission. There isn’t any addition to the plot and the miniscule length of all the briefings is a good indication of just how little story there was in the original game. I’d hoped that it might be expanded on here but unfortunately not.

There is a short technical help section which mentions that Terra Nova had unofficial support for VR headsets, which would be interesting to try out. I’ve only ever tried VR twice and been deeply unimpressed both times so it could be less fun than it sounds, but it does strike me as a game where it might work fairly well. In the unlikely event I ever get my hands on a VFX-1 headset, I’ll give it a go.

Apart from this book, I’ve also added the Lands Of Lore – Guardians Of Destiny guide since the last post. I’ve just a handful left now and it will be Thief 2 next.