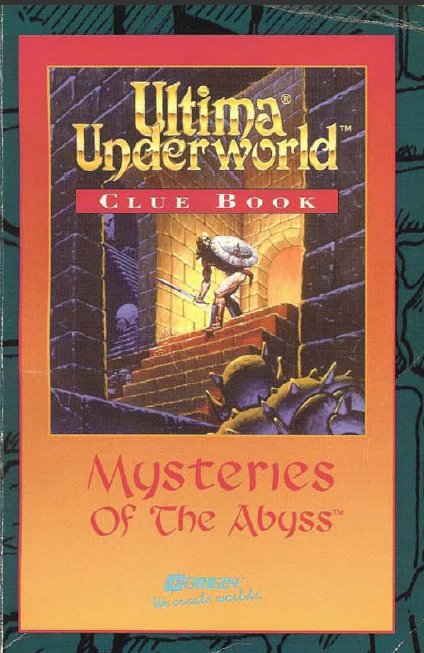 This was the first Origin cluebook I ever bought and it shows. As a teenager, I wouldn’t have worried too much about looking after it and it’s fairly tatty as a result. It amazes me that some of the games I own from back then are in as good shape as they are. Mysteries Of The Abyss was published back in 1992 by Origin and like near enough all the other Ultima cluebooks is available to download from http://www.replacementdocs.com. Origin had established a formula by now of getting a couple of the supporting characters to write the book. This takes a slightly different approach and is compiled by Baron Almrics librarian after the events from several sources.

The first two sections, maps and general advice, are written from the perspective of the villain of the piece, Tyball writing a letter to an apprentice. This adds some dark humour to things as he delights in the suffering of all the inhabitants of the abyss. Rather than having some general text on each level, Tyball just describes the points of interest on each one which are also indicated on the map. Quite how Tyball knows all this stuff I don’t know, and I’m sure he wasn’t as cartoonishly evil in the game but it’s more entertaining than the dry style of Lost Notebooks of Nellie Bly. Tyball takes responsibility for near enough everything that has gone wrong for all these people trying to eke out an existence in the abyss.

The walkthrough is fairly brief but narrates the shortest route through the game. This is then followed by a history of the abyss which gives the story of Garamon and Tyball before the game started. This certainly has more detail than I remember in the game although I’m not convinced it doesn’t contradict to some extent. The book finishes off with a few lists of mantras, spells, and the like.