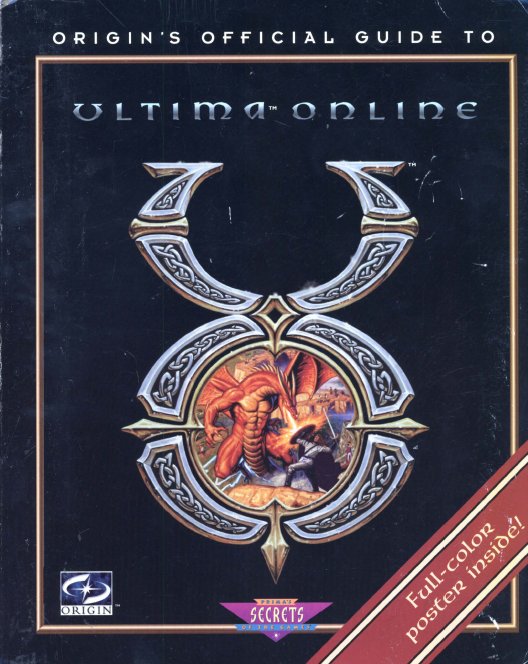 When I was looking through the list of books I still have to do after the last post, I realised that half of the ones left are on Ultima Online. I figured I’d better get started on them so I don’t end up overdosing on UO at the end. I should start out by saying that I’ve never actually played UO beyond starting it up and running around a bit to have a look around. MMORPG’s don’t hold a lot of appeal for me and everything I hear about them always puts me off more. When I run out of other things to write about on here I might give it a go, but while I’ve got other options I’ll take them.

That doesn’t make me the ideal person to read through this, although it’s a significant game and an Ultima so I’m still interested to learn more about it even if I don’t want to actually play it. This guide was published in 1997 by Prima. I’ve scanned it in but not done the pullout as it would mean ripping it out of the book.

With this being a guide to an online game, it has to take a different format to all the others I’ve been working my way through. Usually half of each book would be taken up with a walkthrough section, which is entirely missing here but we still get the usual 300+ pages.

Despite this, there is hardly any filler in this guide and I had a good time reading through it. There is masses of storyline to the book, done with snippets of information from various sources. This starts with a mock newspaper dealing with events in Britannia such as a mage called Relvenian who has the idea of enslaving demons as house maids. Through further editions scattered through the book I learn this goes horribly wrong during a demonstration to Lord British resulting in angry demons slaughtering their way through his castle. The mage ends up hiding in the middle of a maze that springs up out of nowhere. I presume these events were linked in with the actual game and this maze appeared at some point.

The early sections of the guide deal with general advice on what sort of character you might want to play and how to go about it. For each of the suggested character types, there is an entertaining interview with an established member of the profession. I’m assuming these are fake characters rather than actual players since they all speak in the same manner. There are more quotes from these characters when the various skills are described later in the book.

There are a few pages on roleplaying which caught my attention as it basically stated that you wouldn’t enjoy the game unless you assumed a personality within the game. This sounds like another reason not to play it as far as I’m concerned but is probably sound advice if you actually enjoy that sort of thing.

Another section I liked was The Pentameron. This is a collection of five stories performed for Lord British’s 36th birthday and are parables along the lines of the virtue stories for Ultima 9 although focussing more on general lessons than virtues in this case.

Aside from all these, there are maps of the towns and dungeons, a bestiary, item lists, combat tips, magic reagent / spell descriptions, and a general view of the economics of the game. The economics are quite complex in the way that the game would automatically adjust prices to compensate for a glut or shortage in supply, and add resources to an area as new players arrived. I was also intrigued by the pack behaviour of animals whereby they would try to form groups but if resources were low, the group would split and seek out a new area. The amount of detail in UO was really impressive for 1997.

This is one of the best Prima guides I’ve looked at. All the little interviews and stories throughout the book made it a good read compared to something like the Privateer 2 guide which had far too many tables of information. My lack of knowledge may have helped since near enough everything in here was new to me. UO still isn’t a game I especially want to play as it just sounds a little too realistic for my liking. It all sounds a little too much like real work and if I’m going to do that I’d rather earn real money. I also know too many people who started on World Of Warcraft only to vanish for months and I’d rather not become one of them. If you have an interest in Ultima this guide is definitely worth a read anyway, even if you share my opinion on MMO’s.