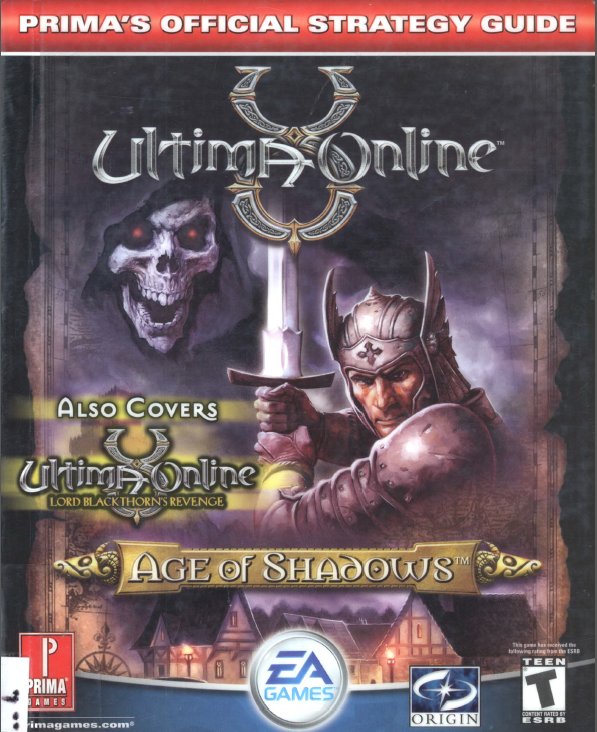 This is the final Ultima Online guide book that I’m going to be looking at. There were more of them after this but Origin had ceased to exist by then, so I’ll stop here. This was published in 2003 by Prima and the vast majority of it is simply a copy of the previous guide I looked at for Lord Blackthorn’s Revenge. It even still says Lord Blackthorn’s Revenge at the top of all the pages. It isn’t an exact reprint though since the Lore & Background section has new scenarios and the Todd MacFarlane interview has been removed.

The new scenarios are a strange set of tales. The first story is about some sort of creature waking up, coming to terms with the world only to smell a leader who tells it to dig. The second story is a boy who cried wolf variant about a mad beggar who feigns being attacked each night only to be set upon by giant ants at the end of the tale and scared into sanity. The final tale is presumably about the end of the previous wars from the LBR phase of the game. I have no idea what the purpose of the first two stories was but they might make sense had I played the game.

I also notice that there are a few more virtues implemented into the game at this stage. It’s a fairly simplistic system for these but combining upkeeping virtues along with all your skill levels and everything else sounds like enough to keep most players busy.

The new section is around 50 pages long and covers the new additions to the game in Age Of Shadows. There was yet another land called Malas with it’s own set of towns and dungeons. The new area brought a couple of new character classes with it of necromancers and paladins, combat special moves and some new monsters.

There is a new section on on housing which I was curious about as I’d always wondered how this worked in UO. It explains why houses ended up selling for large amounts of real money on Ebay. There is a 2 page bit of fiction to end the book about with observations on Malas and it’s place in the UO multiverse by a young mage.

The new changes to the game look to be more in keeping with what I might expect from Ultima. I find it hard to believe that the UO2 cyborgs ever came to UO, but I suppose the Ultima multiverse allows you to go in any direction you like. There is a free 2 week trial on the ultimaforever website which could tempt me into trying UO but while there are single player RPG’s like Fallout 3 as an alternative, it probably isn’t going to happen. It’s about time I read the guide for a game I know something about so I’ll have a look at Wing Commander Prophecy next.