It’s been another lengthy break but I’m picking this blog up again for a few more games. I’ve been catching up on some of the games I bought over Xmas in sales so I’ve been playing The Witcher and Red Alert 3 among others. I’ve still got a stack of games left to play but I’m going to do another few games on here first. I’ve got Thief 2 & Arx Fatalis waiting + a few older titles. I also notice that the Ultima 6 project is getting close which might be the nudge I need to finally start on Lazarus. After playing the Witcher, I’m not in the mood for another giant RPG quite yet though. 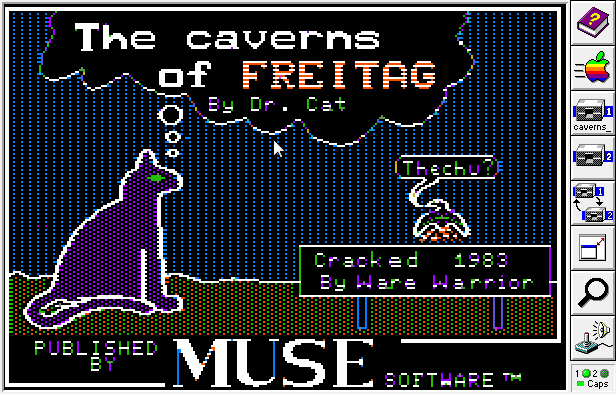 First on the list is Caverns of Freitag. This is a 1982 Apple 2 game written by Dr. Cat who would go on to join Origin in 1986 and work on numerous Ultima games. That’s a fairly tenuous link in itself but the game was mentioned in several Ultimas which just about gives me reason enough to play it. 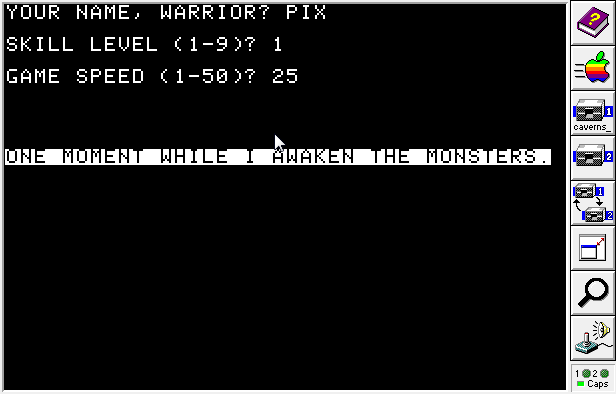 I’m having to play this game without any decent instructions as there is very little information on it that I could find. It’s obscure enough to not even have an entry on Mobygames. It’s an extremely simple game though so I managed to muddle through. To start, I’m given options for level and speed. I just pick the middle speed and the easiest level. If I’m going to play a game thats 30 years old I may as well make it easy for myself. There is no saving built into the game so you are expected to play it in one sitting. 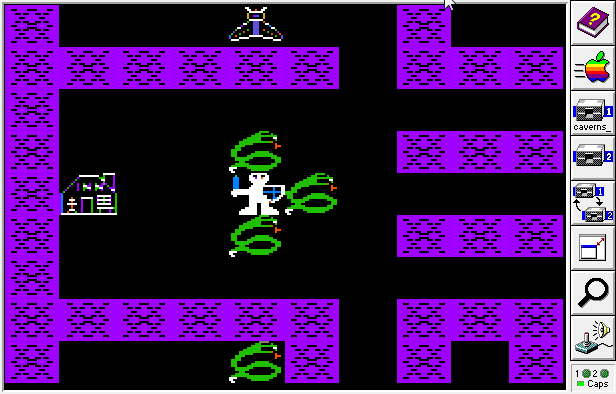 The games plot involves venturing into the caverns of a dragon called Freitag who you have to kill and then escape back to the start. The game is in essence a maze crawl with some basic monsters and stats to add an RPG element. I start the game at a pub. Why there is a pub in the caves I don’t know but this serves as a base to go out adventuring from. All the nearby monsters immediately head for me as soon as I start but as ever in games this old they lack the intelligence to figure out a route around corners. I gain xp in the usual way for killing them off and a trip back to the pub with enough xp restores my hp and puts me up to the next level.

Combat is extremely simple and I just stand next to a monster and bash away at it until it dies. I do have a bow as well as a sword but this weapon only works at range and all the monsters close me down extremely quickly so I end up not using it except for on one particular enemy – the wizard. The wizard is extremely nasty and hurls lightning bolts at range. He can move faster than me and is impossible to get on an adjacent square so I always have to take him out with arrows. 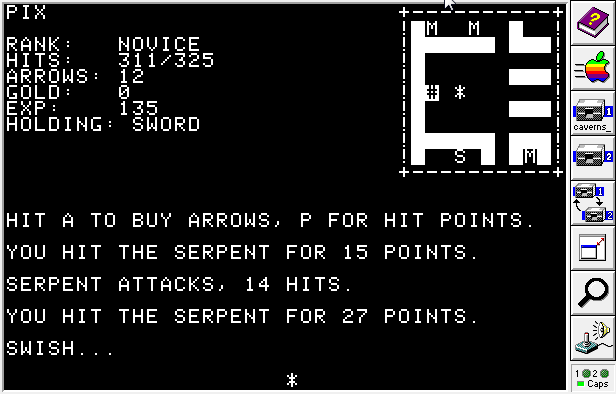 I gain levels extremely quickly at the start of the game which is just as well as I can hardly keep myself alive. The monsters die more quickly + I get more hp with the extra levels and I’m soon bulking up. I don’t travel too far from the start as I’m always needing to come back for hp and levelling up. I can restore hp at the pub by purchasing them. One purchase always restores all my hp and this is cheap enough. I can also buy arrows for my bow.

There are 3 views in the game. You can move around in all of them but the game is meant to be played in the “hi-res” view showing the pictures of the monsters. The other views such as the one above do give a bit more detail though. I used the second view here to see my hp and level. 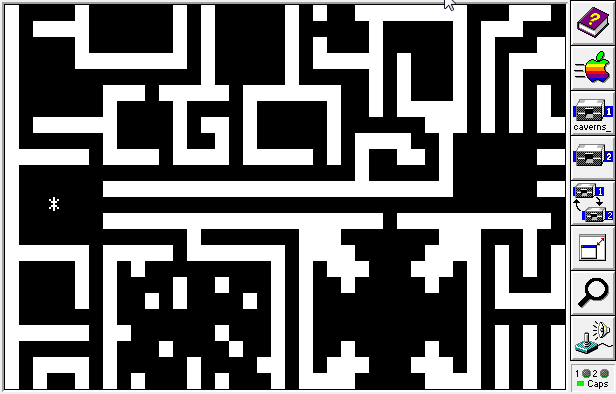 The final view shows a lot more of the maze and is useful as a map. The snag is you can’t see monsters so if you try moving around on here you can get attacked without realising it. 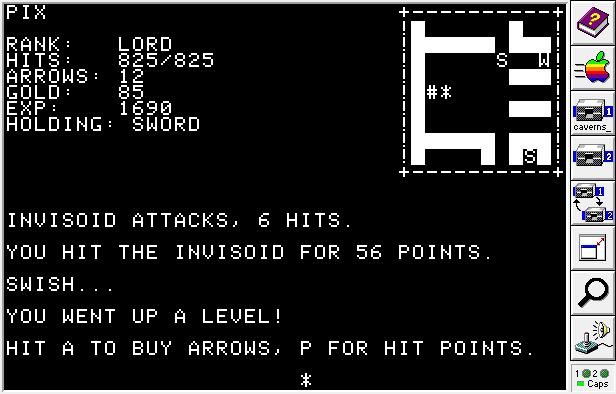 The maximum level in the game is Lord. I think my hp’s may keep going up slowly as I gain more experience after this but from this point on I always have to pay for my hp back at the pub. The money is never a problem but the trek back can be a bit tiring. 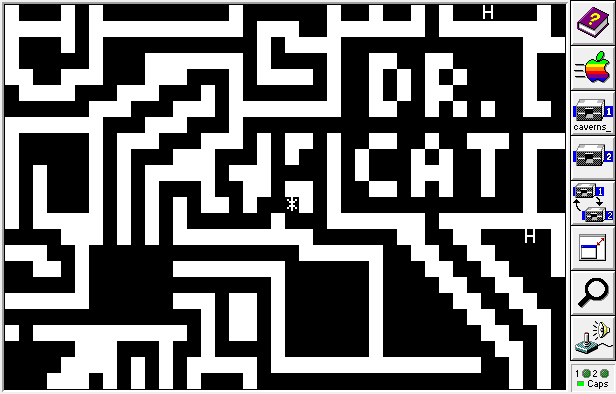 I start heading further afield and find Dr Cat’s signature in the maze. 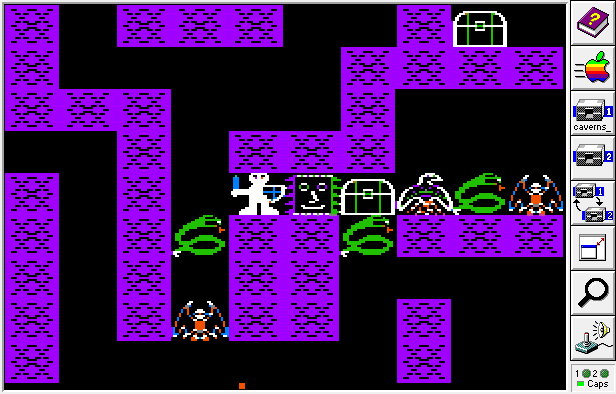 There is one more way to heal. The thing next to me here that looks like a microchip with a face is a healer. These are shown on the map view as an H and walking onto them heals a few hit points. It’s normally so few that their use isn’t of much benefit if you have to go out of your way to find them. 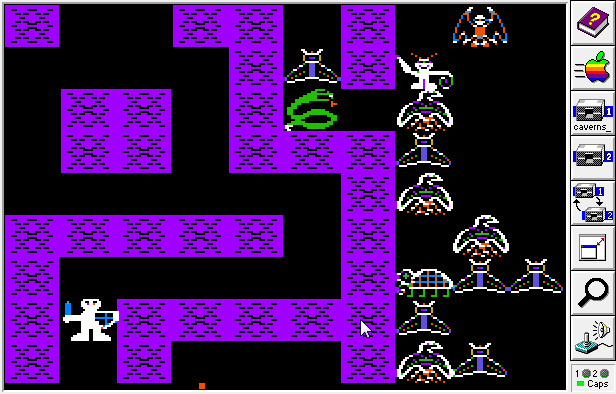 I don’t think monsters respawn in this game although it’s not always easy to tell as they are always hunting me out from unexplored areas. I’m clearing out the maze by this stage anyway although there is a lot of it to explore and I keep having to make lengthy journeys back to the pub to heal. I notice this large open area on the right, full of monsters and it looks like the place to go. Clearing out all those monsters takes a few attempts but I make it through. 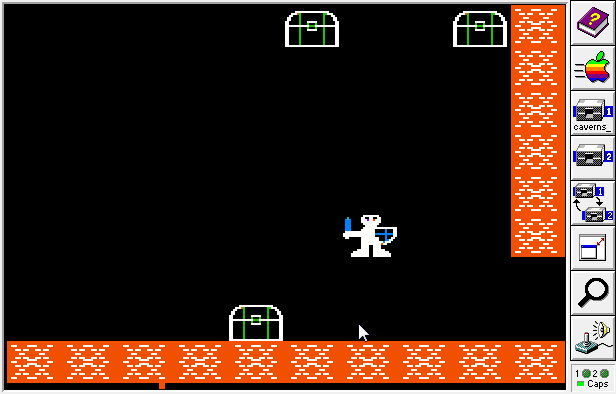 When I do all the walls immediately change colour so I must be getting somewhere significant. 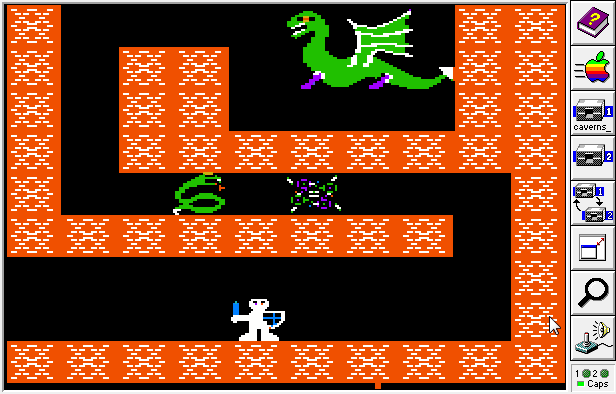 Sure enough I spot a dragon which shoots out fireballs to the end of the cavern. If I’m careful with my timing I can get myself close enough to the dragon to start swiping at it with my sword. It takes a few hits but it’s not all that tough a fight. 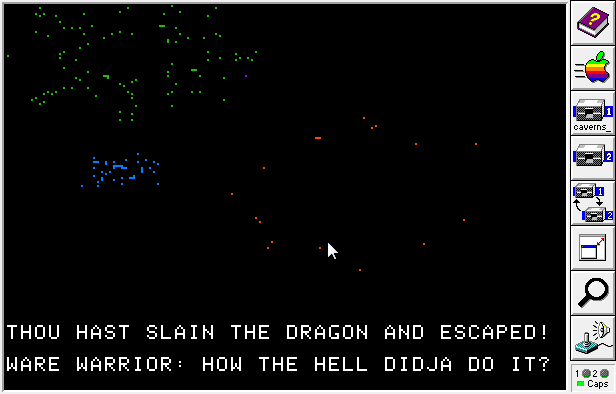 I’m low on hp’s by now but with the use of a few savestates I manage to make my way back to the pub. I also use a spell I’ve not mentioned so far. When you press escape you turn into a bird and can move at twice the speed. This gets me past a wizard who I don’t want to fight. When I get back to the pub, I win the game and get a fireworks display as a reward.

This might not have been a bad game in 1982 but Ultima 2 was certainly leagues ahead of this. The maze was fairly large and took some exploring but the whole lot might not have been larger than any single map from Ultima 2. There wasn’t much here to hold my attention and I couldn’t recommend this to anyone these days. I still enjoyed playing it but I was watching tv at the same time which definitely helped.

I notice that Lords Of Ultima was released a couple of weeks back. For anyone who doesn’t know this is a free browser based game. I went and had a quick go at it – it looked like a competent strategy game but the links to Ultima were tenuous enough that I didn’t spend too long on it. If it had been more interesting I might have blogged it here but since it’s nothing to do with Ultima, I’ll pass. It’s not my sort of game in the first place and the idea of spending real world money to get an advantage in an online game is abhorent. I’ll be sticking to the older games on my list for now and there are plenty to be getting on with.