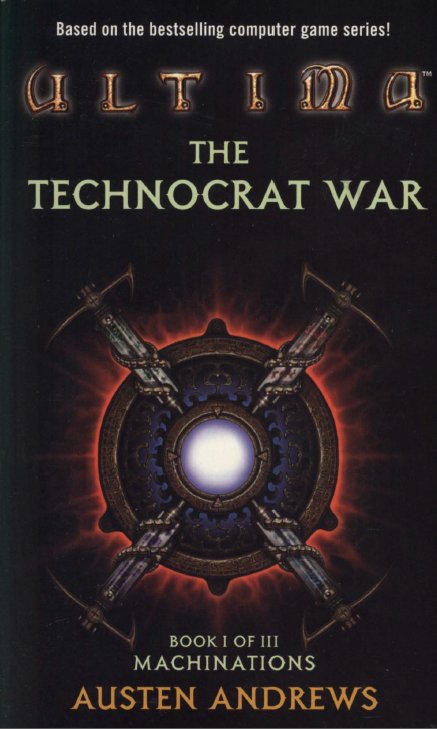 This was published in 2001 by Pocket Books and written by Austen Andrews. It’s the first in a series of 3 novels based around what would have been the Ultima Online 2 universe. Ultima Online 2 was ultimately cancelled but many of the elements were carried over into later versions of Ultima Online 1 as seen in some of the Prima guides I looked at a few weeks back.

In the world of the novel, Blackthorn has been forced to flee New Britannia but is rebuilding his forces in a distant land. He has harnessed the power of machines left by a previous race and is building an army to retake New Britannia and also conquer the Juka race closer to home.

At the start of the book, the Juka are sailing to Britannia in order to try to forge an alliance with the humans and defeat Blackthorn. They are however attacked by forces commanded by a knight called Montenegro against the orders of his superiors. During the battle, he is challenged to a black duel by the Juka Way Master Thullan, defeated and as per the deal he then orders his superior forces to let the Juka’s escape.

This battle doesn’t put the Juka’s off trying to forge an alliance and a second party is sent. Blackthorn sends an agent to try to sabotage this alliance however. Without giving the whole plot away, much of the book deals with the relationship between Montenegro and Thullan and they ultimately have to forgo their differences to try to track down the saboteur. The book ends with a desperate defence of the Juka’s lands and Blackthorn’s forces being repelled at great cost to the Juka. The alliance is forged but the war is far from won.

I enjoyed Machinations vastly more than I expected to. Unlike the earlier Ultima novels, this stands in its own right without relying on nostalgia or knowledge of the games to sustain the reader’s interest. The characters are rounded, complex and believable, and the story always had enough intrigue to keep me turning the pages. The end of the novel, possibly felt a little rushed as if the battle had been crammed into a few pages to add a climax but it’s only a minor complaint.

I can’t say that it felt very much like an Ultima however, being based as it was on the Ultima Online universe with new races not featured in the main Ultima series. The Meer race were already established in New Britannia at the start of the story although there is only one of them in the novel. The Juka’s were more or less the typical fantasy alien race of warriors with a strong honor system. They may as well have been the Kilrathi, or the Klingon’s for that matter. The Technocrat’s of the title are Lord Blackthorn’s forces who now have mathematics as a religion and steampunk technology to work with. It’s the standard battle between the forces of order and chaos, with the twist being that the good guys are on the side of chaos.

All of this is a long way from Ultima as far as I’m concerned but it’s still a decent fantasy universe to set the novel in and would have been a solid basis for a game also. The story mingles familiar themes with the virtue system of Britannia and it actually creates a cohesive whole. Thanks to the depth of the characters this is ultimately one of the better modern fantasy books I’ve read in its own right. I’m very much looking forward to reading the next two novels and wouldn’t hesitate to recommend this to any fan of fantasy fiction, even if they know nothing about Ultima.

I’ve scanned this in as usual but I can’t achieve great quality with these small paperbacks. It’s perfectly legible but if you want anything better, I’d recommend buying the real thing which can be picked up for next to nothing second-hand.