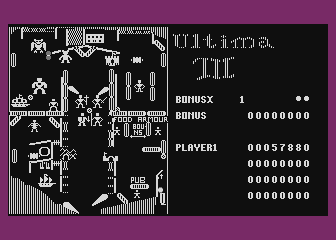 This is the second and as far as I know final Ultima pinball table, from the same author as the Ultima 2 table I looked at yesterday. It’s available as a free download from http://www.atarimania.com/game-atari-400-800-xl-xe-ultima-iii-pinball_20429.html. This one has a similar layout with the table split into halves and compartments in each corner. It’s a lot busier than the Ultima 2 table though with plenty of bumpers and targets to aim for.

I wouldn’t say that I could do all that much aiming having said that. It’s more of a case of just making sure you hit the ball at all. Once it gets into a compartment, it can bounce around racking up points for several seconds and I had it stay up in the top right for a couple of minutes at one point without me having to do anything.

Unusually, the game starts with a ball in play at the top left before you pull the plunger. The best tactic presumably would be to play this ball first and then launch the other but I wasn’t patient enough for that.

The physics on this can be even stranger than the last table with the ball going off at crazy speeds and angles. I’ve also had it go into slow motion in the bottom half of the table at times. This is particularly strange when the other ball is pinging around like it’s made out of rubber in the same area.

In short, the price is right but I still couldn’t say that anyone should go out of their way to play this.

There are a couple more books in the replacementdocs holding area of the downloads. I’ve redone the Dig guide having got hold of a copy myself recently. The original was much smaller but a bit too compressed for my liking. I’ve also uploaded the Sam And Max Hit The Road hintbook. 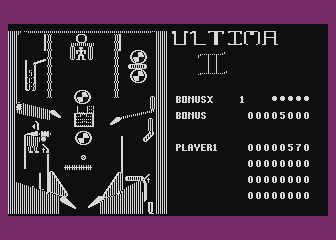