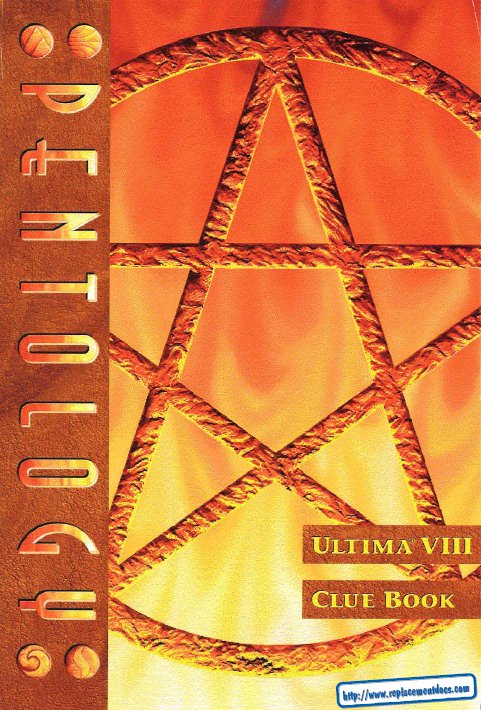 I’ve actually got two different U8 cluebooks for some reason, one official and one not. I may as well look at both but I’ll start out with the official one which was published in 1994 by Origin. This is the last Ultima cluebook I scanned in for replacementdocs.com.

I can’t say that I liked Ultima 8 much and it is quite definitely my least favourite out of the entire series. There were a lot of good aspects to it though so it’s not going to put me off the cluebook.

There isn’t much in the way of narrative throughout Pentology but what there is, is written as though by Remvatos aka The Observer, son of Apathas who has been summoned for the purpose. For the most part, this takes the form of a page of introduction by Remvatos at the beginning of each section before it ploughs into fairly raw data. There also isn’t a lot of artwork in here and instead it uses graphics straight from the game. The maps are presented using the same isometric view straight from the game and the bestiary similarly uses the games graphics to show each creature.

The sort of hints that went along with the maps are now condensed into a brief 5 page set of prophecies which read a little like horrorscopes. These are reasonably well done if you don’t want to be told what to do which is just as well as the walkthrough is literally a bullet-point list of how to beat the game. Given how brief the hints were, I expect this is what you would end up using if you are stuck.

I’m not impressed at all by Pentology. My least favourite game in the series has turned out to have my least favourite cluebook as well. The little bits of narrative are quite well written but very brief and there is hardly anything in here adding value. The best section of the book was the bestiary which did at least say a bit about the creatures in the game. I gather that the game was pressed into release too early and this cluebook gives the same impression of being rushed.