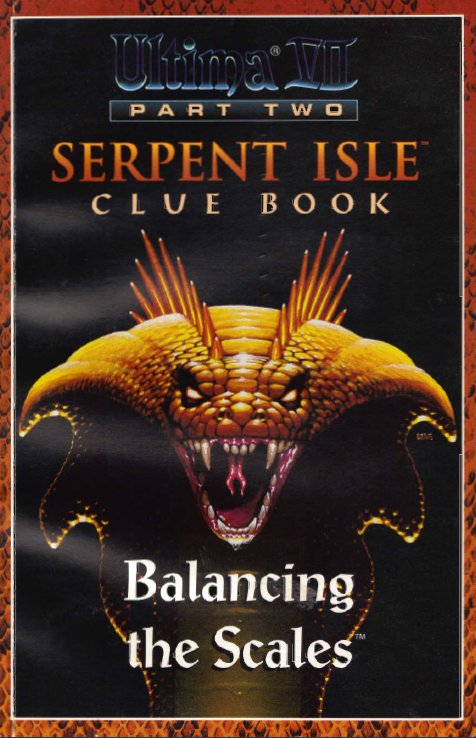 This is another one of those cluebooks that I scanned in 2 1/2 years back and is still stuck in the uploads queue at replacementdocs.com. I’m not entirely surprised looking at some of the early pages as they are badly out of focus around the spine, and generally a bit of a mess. They get better later on and I can still read it all ok though. It’s a hell of a lot better than nothing at all so if you want to download it it’s available here.

I’ll keep this brief again since there isn’t a whole lot to say about all these Ultima cluebooks and you’d be far better off downloading them than reading my ramblings. It’s more about ticking them off the list than anything else. This one was published in 1993 by Origin and is along the lines I’ve come to expect by now. It’s supposedly written by Thoxa as a guide to a foretold hero who will restore balance. It starts out with a history of Serpent Isle, including the current occupants leaving Sosaria, their virtue system and a history of the islands previous occupants.

It then gets onto the stuff that will actually help you through the game with the standard town/dungeon guides. This is presented entirely as a travelogue by Thoxa as she goes to every corner of the realm gathering information and is easily the most entertaining guide that I’ve read in any of these cluebooks so far. It weaves in gentle clues to the story without resorting to lists and you could use all of this without risking of spoiling the game too much.

It then drops the pretense of being a guidebook and goes into the game mechanics. This is a dull but useful section with one table of data after another. Finally, there is a fairly straightforward walkthrough with two sets of answers, the first answers giving reasonably specific clues to what has to be done, whereas the second give very specific clues + details of all the optional tasks. It isn’t the sort of walkthrough you would want to read as a story but it is a format that lends itself to finding a specific answer without having to read the whole thing.

I think the content and structure of these books has in general improved steadily as I’ve worked through them, which makes this the best so far. I prefer the Ultima 3 cluebook as a collectible but this is a better guide to its respective game and more fun to read at the same time. I really wish there were interviews with the developers in all of these but they didn’t start appearing in Origin’s cluebooks until later. I’ll have to make do with the Official Book Of Ultima.