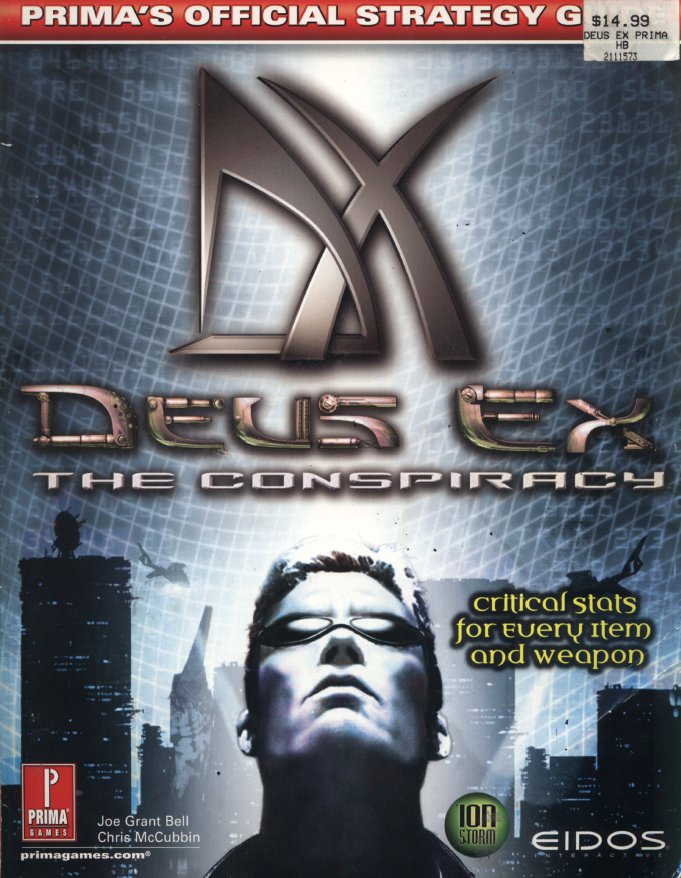 I’ve always been a fan of Warren Spector’s games so it was something of a surprise that when I came to play the game usually held up as his masterpiece for this blog, I didn’t like it all that much. The main reasons were the dialog and voice acting which stopped me from being able to take a deadly serious game, at all seriously.

I had played it already back when it came out, and I certainly enjoyed it more back then. I suppose it must reflect my tastes changing as I get older, which isn’t a pleasant thought. Perhaps, it’s simply the case that other games have offered similar but improved experiences since and I went in with my expectations too high. Either way, I’m clearly in a tiny minority with my opinions and there is still plenty to like in Deus Ex.

I didn’t exactly explore the game thoroughly on my playthrough which left me interested to have a look at this guide and see all the things I missed. It was published in 2002 by Prima and is actually for the PS2 version of the game, although there is little (if any) difference to the PC game if this guide is anything to go by.

It starts with advice on how to develop your character including descriptions of all the various upgrades in the game. There are then lists of all the weapons and opponents followed by a brief section with various general advice on combat and other aspects of gameplay. The tips on character advancement are the most useful section but it’s all decent advice.

The last 2/3’s of the book are taken up with a walkthrough of the game. This does mention all the various options you can take, although it tends to only go through one route in-depth. This walkthrough is very pictorial with 100’s of screenshots throughout. It’s not that dissimilar to reading some of my own posts in that sense. Because of all those pictures, there isn’t all that much description and the plot of the game is barely mentioned. It’s strictly about the actions that you need to take.

This means there isn’t really anything in the way of plot spoilers, but I’d like to have seen all the differences in the story described in full. The 3 endings are mentioned but you are clearly expected to play the game to find out what happens when you try different things. There is a 3 page section on the story of Deus Ex at the end however, which doesn’t deal with events in the game but does give the history of events before the game starts. The story isn’t especially plausible when you see it all written down like this but it’s certainly got more depth to it than your average game.

The guide suffers some of the same issues that the Thief guide did but to a far lesser extent. I might have expected a list of all the experience bonuses, more detailed maps and where to find equipment. Most of the information you actually need is probably in the walkthrough though and it does pack a lot into a fairly small number of pages.

As usual I’ve scanned and uploaded this. I’ve also been scanning other guides in the meanwhile, and have added pdf’s for a Curse Of Monkey Island, Magic Carpet 1 & 2 and the Pandora Directive since the last post. I know at least one person is waiting for it, so I’ll probably have a look at the System Shock 2 guide next.