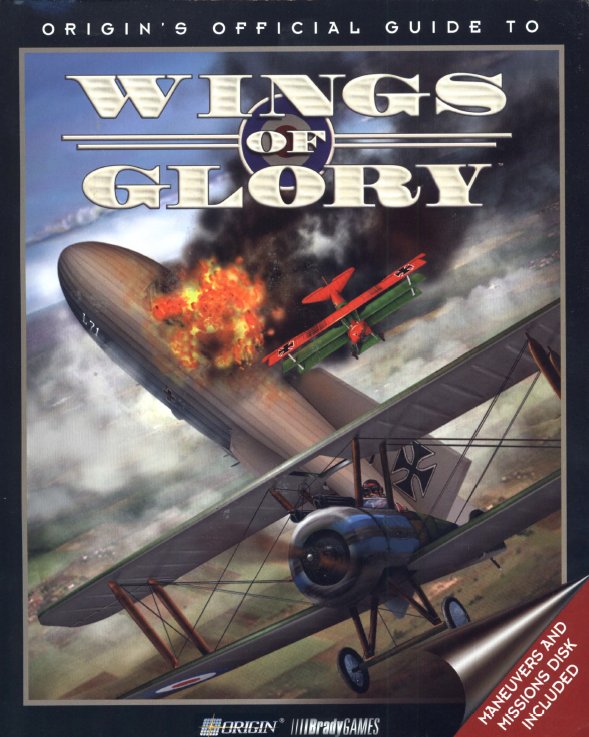 This was published by Origin/Brady in 1995. It came with a a flight recorder disk and I’ve added a disk image of this + a pdf of the guide to the downloads.

It starts out with the usual stats, plane descriptions, general tips and the like. It’s a nice touch that rather than just describing the maneuvers, you can load up the recordings from the included floppy and watch them being done. This section would probably be most helpful if you intended to play the game on full realism when you will need to know all these moves. I certainly wasn’t aware of using many of them when I played the game myself.

The largest portion of the book is for the mission descriptions which are accompanied by a written storyline of what goes on between the missions. It’s done in the same sort of style as the Wing Commander 1 & 2 guide and turns a series of dry mission write-ups into a reasonably entertaining mini-novel. At the end it even goes on to tell you what happened to all the various characters from the game after the war ended. I can’t say that I became too attached to the characters in the game. They do come across more strongly in the novel though. It might have been good to have been reading through this at the same time as playing the game.

There are about 20 pages of interviews to conclude the book with most of the developers. Wings Of Glory was apparently the idea of Warren Spector who decided that it was a waste having a great engine like Strike Commander with a full virtual cockpit when all the planes were always out of sight or zoomed past so fast you couldn’t see them. He was more interested in the close-up slower-paced dogfighting of WW1 and I agree with him on this entirely having played both games. Apparently, Wings Of Glory was supposed to be finished quickly and cheaply since it was using the Strike Commander engine except they ended up converting the engine to 32 bit in order to get enough speed out of it.

It appears that a huge amount of WW1 research went into the game and there is a list of references at the end of the book. This ranges from pilot autobiography’s through air combat history books, movies and even other games such as Red Baron. If you wanted to track down everything on this list it would keep you seriously busy.

Wings Of Glory was a game I enjoyed a lot more than I thought I would and the same can be said of this guide. It was a lot more fun than the WC4 guide I read last. Next, I’ll be having a look at the NES Ultima 3 Guide which I picked up earlier this week.