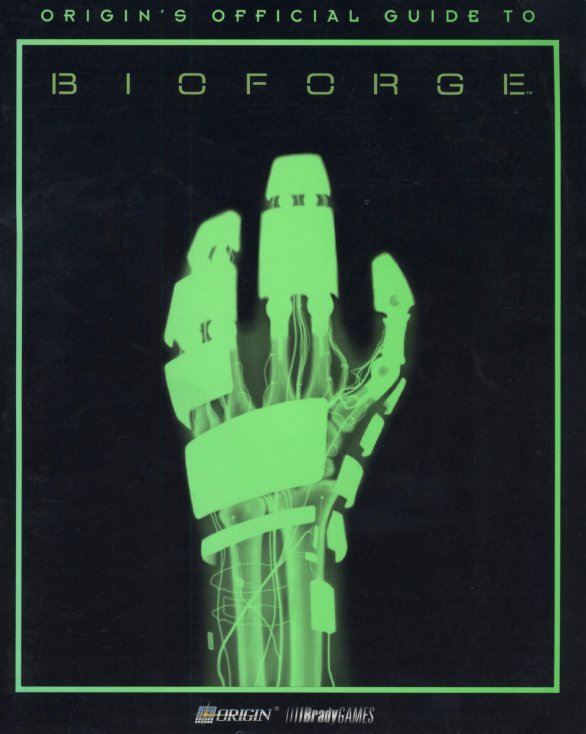 The next book on the list is the Official Guide To Bioforge which was published in 1995 and is now in the downloads. I particularly enjoyed Bioforge and it’s one of my favourite Origin games. I was already a fan of the genre from the Alone in the Dark series but Bioforge improved on nearly every aspect of it, apart from performance. It was all too easy to die in combat and the load times were really poor at least on the machine I was running back in the mid 90’s.

The guide is supposedly written by a Mondite that has had his mind ripped from his body and is now floating around in a computer somewhere. He wants to hitch a lift in my hardware and hence has a vested interest in helping me escape. Right from the start this makes this book a pleasure to read compared to the dry presentation contained in most of the other guides I’ve looked at in the last week or so. The pretense of being presented this information by this disembodied brain, is kept up throughout nearly all of the book even down to attempting to explain away saving and loading.

It starts with the absolute basics introducing the games controls, then moves onto the bestiary. Aside from the usual background, the bestiary gives combat tactics to use on every monster in the game without too much in the way of spoilers. This is exactly the sort of thing that would have saved me some loading time back in 1995.

After this is a map section and then the pages swap to colour for pictures of every location in the game, with highlighted points of interest. Next there is a hint section done in the form of questions and answers. This rarely gives outright solutions and is just to point you in the right direction. If you want to be told what to do, the walkthrough section is next. This still takes the form of being written by guy floating around in your brain and is quite entertaining because of it, when you aren’t being given explicit instructions.

The last section of the book is simply called Data. This starts with a history of the guy in your head, then follows on with the current order of the galaxy, how it is governed, details about the Mondites and a brief history of the Phyxx. There is plenty here that is not even touched upon in the game, as the universe outside the Mondites and the moon of Daedalus is barely mentioned. There is then a copy of all the text in the game. Bioforge wasn’t short of reading matter so this goes on for some pages. Finally there is a guide to working out your identity. It appears that this changes depending on what path you take through the game at certain key events which I didn’t know before now.

I’ve played plenty of games where you start out with no memory and finding out your identity is always an obvious goal throughout the game. Bioforge has to be the only game I’ve played where this is entirely optional and of no consequence whatsoever if you do find out. Whoever you were, you clearly aren’t that person any more.

There is more information than strictly necessary in this book which is just how I like it. It’s one of the better guides so far and certainly one of the largest despite the game being relatively short. All of the books from here on out are on the lengthy side so I’ll be slowing down significantly while I find the time to read them. I know at least one person is waiting for it, so Avatar Adventures will be next.