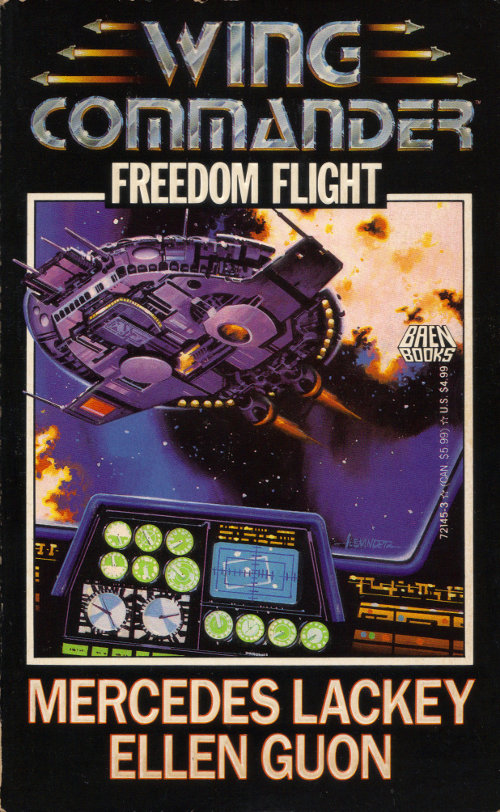 This is the first novel I’ve read for this blog and the first in a fairly long series of Wing Commander novels. It was published in 1992, which puts it around the time of Wing Commander 2. The story is set, however, during the Secret Missions 2 campaign and is a retelling of that expansion pack.

The story is told mainly from the point of view of Hunter who takes the role of the maverick hero, but is also told from the perspective of Hobbes and K’Kai (a Firekkan pilot). The book starts out with Hobbes defection from the Kilrathi. A small group of Kilrathi have realised that the war is pointless with neither side able to gain superiority and therefore bringing no honour to those involved. This rebellion aims to overthrow the emperor and needs the aid of the humans to do it so Hobbes is ordered to surrender the ship he commands.

Meanwhile, Hunter is taking leave on Firekka and getting very drunk with K’Kai a Firekkan pilot who is something of a rebel to have volunteered for pilot training in the first place. He is recalled back to the Tigers Claw, extremely hung over after his first night to fly patrols after some Kilrathi have unexpectedly shown up in the area. He ends up rescuing Hobbes’s Fralthi as it comes under attack from other Kilrathi ships and in return Hobbes transfers the loyalties of his second in command (Hirha) to Hunter himself, resulting in Hunter now having his own slave Kilrathi which he is less than thrilled about.

From here on the plot follows the game fairly closely with the Kilrathi arriving in force for their ceremony, which Hobbes gives the details of. The humans disrupt the ceremony by attacking it with marines which leads to the shaming of all Kilrathi involved and they all retreat since they no longer have the favour of their war-god. This is more or less where the game ended. However, in the book the Firekkan leaders are kidnapped by Thrakhath. Confed are doing nothing to save them and Hunter, Kirha and K’Kai end up hatching a plan to go in and rescue them from Kilrathi space single-handedly. They plan to hijack the Bonnie Heather for this but Paladdin and his comms officer Gwen agree to go along. Suffice to say that the plan succeeds and they rescue the leaders with the unfortunate death of Gwen. At the end of the novel, Hunter releases Kirha from his bond and makes him a free Kilrathi.

The plot is simple enough then and follows the game very closely. It’s written in a fast paced, easy to read style with a lot of background on the characters and cultures that there wasn’t room for in the game. It’s certainly a change of style from the confederation handbook, which was heavy on the science and this is far more along the lines of your typical space opera and was an entertaining if unchallenging read.

It’s not at all what I expected actually. I didn’t think it would be so faithful to the games but it didn’t come across as rehashing old material either. I’ve only read a few novels based on games, namely the Tex Murphy and Gabriel Knight novels. Both of these were decent enough books but they simply retold the story from the game and didn’t add anything. This on the other hand fleshed out the storyline of Secret Missions 2 and for the most part happened away from the games plotline whilst being based around the same events. The game was extremely limited in the story it could tell with nearly everything happening in either the bar or the briefing room. With these constraints off, the story gets some room to move and is far better for it.

I will say that the book did get a little cheesy at times with, for instance, all the usual rubbish about alien races not understanding each other that you could read in a million other sci-fi books. Also, I wouldn’t say the characters were one-dimensional but they are only really caricatures. Wing Commander wasn’t known for its intellectual storylines though and it all fits in with the game perfectly. I very much enjoyed reading this, far more than I thought I would. You can get through the whole book in a few hours and if you are a Wing Commander fan, it should be compulsory reading.