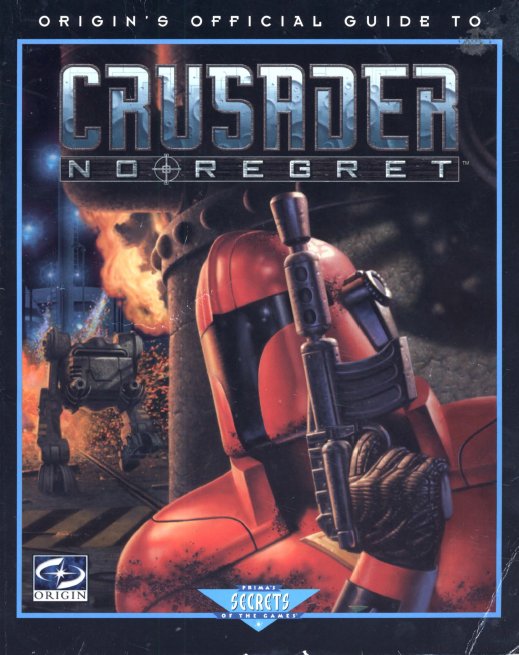 This was published by Prima in 1996 and is now on the downloads page here as a pdf. This book follows an almost identical format to the Crusader No Remorse guide so I won’t go into any detail. The early sections especially are an updated version of the first book with descriptions of all the weapons, items and enemies in the game.

The missions section also follows the same structure being split into map and walkthrough parts. The walkthrough has an introduction giving the plot of the mission and the designers aims with it, before guiding you through the best route at some length.

At the end of the book, there are no interviews this time but there is some concept art for Crusader 2, a game which unfortunately never saw the light of day. It’s amazing just how many projects got cancelled in Origin’s later years and I’d certainly have liked to see another Crusader game myself.

I enjoyed all the background on all the items and enemies at the start of the book but there isn’t too much in the way of extras that wasn’t already in the Crusader No Remorse guide. In general the more modern guides are proving to be less fun than some of the older ones.

I thought I’d have a quick count of what I’ve got left to do, and I make it that I still have 14 books on the list. I’ve already scanned in 9 of these but I won’t upload anything until I’ve had a look through it myself.

While I’m posting, I’ll give a quick mention to the latest version of MUNT which is an MT-32 emulator. This has been in progress for years, but since the start of May it’s reached a stage where the sound produced is almost indistinguishable from the real thing. Origin didn’t often make the best use of it but MT-32 sound is still the only option as far as I’m concerned for many of their games. It’s been built into his latest build of Dosbox by ykhwong which is probably the best way to try this out, or is available as Windows drivers elsewhere.