I’ve rescanned the Crusader No Remorse guide from scratch and reuploaded it. The previous version was one of the few scans on here which I didn’t do myself and I was never happy with the quality of it as all the inside pages were scanned in monochrome including the ones in colour.

I’ve also uploaded another couple of Lucasarts’ guide books:- Day Of The Tentacle and Tie Fighter – Defender Of The Empire. 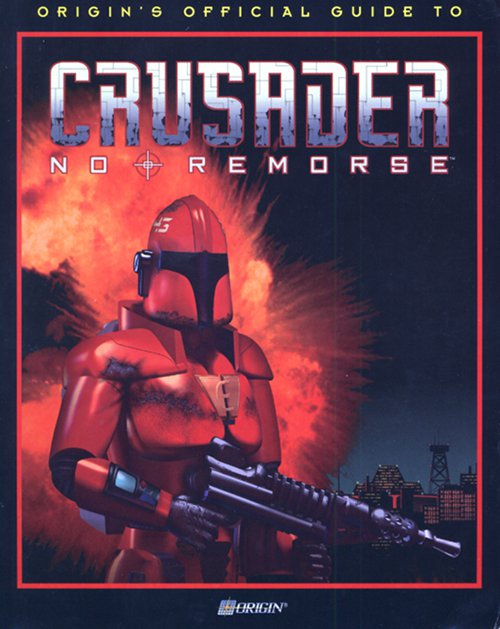 This was published by Origin in 1995. This is the second to last of the guide books that is already scanned in. I don’t actually know who did the scans but the pdf found it’s way to me via Mirir.

Crusader has to be one my favourite Origin franchises, even if it did only span the two games so I was always going to be interested in reading this. It starts off with an irreverent guide to all aspects of the games with general tactics, difficulty levels and item prices to get you up to speed with the basics. It then goes into enemy and weapon guides. There tends to be a page per item/enemy with a picture and a whole backstory for each. You really don’t need to know most of this stuff but I always enjoy any extra scene setting I can get on a game I like as much as Crusader.

There are not one but two map sections after this, both of which have images of the maps directly from the game. The first (with larger map images) is a full map of every level complete with points of interest. The second is something of a walkthrough, showing the quickest/easiest route with notes at some locations. Crusader is the sort of game where it is quite easy to end up walking around looking for the next thing to do. Between them, these 2 sections should get you through any area you are struggling with although I’ve little doubt it would still be possible to get stuck.

The map sections take up most of the book but there is still room for about another 35 pages of extras. These start with a little artwork section, which is a nice idea but would have been much better in colour. Next is a complete history of the World Economic Consortium and the resistance. The game itself came across as fairly camp with the over-the-top acting and ridiculous costumes but the backstory is a lot more dark and actually quite plausible.

After this there is the team notes section which consists of two short interviews, one with Tony Zurovec – Project Lead, and the other with Beverley Garland – Art Director. These give some insight into the game’s development and are well worth reading. Crusader turns out to be yet another game that was inspired by Castle Wolfenstein on the Apple. It’s a game I’ve never played and I’m beginning to think I should. As far as the storyline goes, Zurovec apparently had a fairly bleak view about the state of the government at the time and a future where the world was enslaved by a corporation reflected his outlook of the way things could be headed.

He also mentions plans for the sequel, including enhanced branching FMV’s and a multi-player mode where you could possibly have bought a robot and had your friend play it in a co-op mode. Either of these sound like great ideas to me but they didn’t actually make it into No Regret.

Right at the end of the book is a single page of Did You Knows? The best fact in here is that Level 9 of the game was based on the Origin offices.

Origin’s later guides when they moved to the larger format always had a lot of content and this is no different. There should definitely be something of interest in here for any Silencer aficionados.