So much for the quick start on Noctropolis. Between various Christmas-time distractions, office parties, flu and the various other projects I’m involved in, I haven’t got around to doing any more than playing the first ten minutes to get a feel for it. I can’t see me starting it properly for a little while now so by way of filler, here is a short piece on some more Origin memorabilia. Apologies in advance for the quality of the photos. I had a choice between my webcam or my phone neither of which is ideal for this.

These series of 6 action figures were planned to be brought out to tie in with Ultima Online 2 back in 2002 and were manufactured by McFarlane Toys who I gather make plenty of other similar figures. I understand that a contract of some description was agreed between them and Origin whereby the figures had to be manufactured and sold but this ran into a major hitch when Ultima Online 2 was cancelled by EA, rendering the figures obsolete. Not to be put off, they were rebranded as Ultima Online (minus the 2) figures and sold anyway. At least they tried to sell them. Sealed copies can be picked up for next to nothing which suggests that plenty were left over afterwards. In fact, if you go on Ebay you will be hard pushed to find any that aren’t sealed.
Ultima Online 2 was planned to be a major departure in the series and to introduce technology to the world of Ultima. This went as far as cybernetic’s leading to the likes of Robo-Blackthorn below: 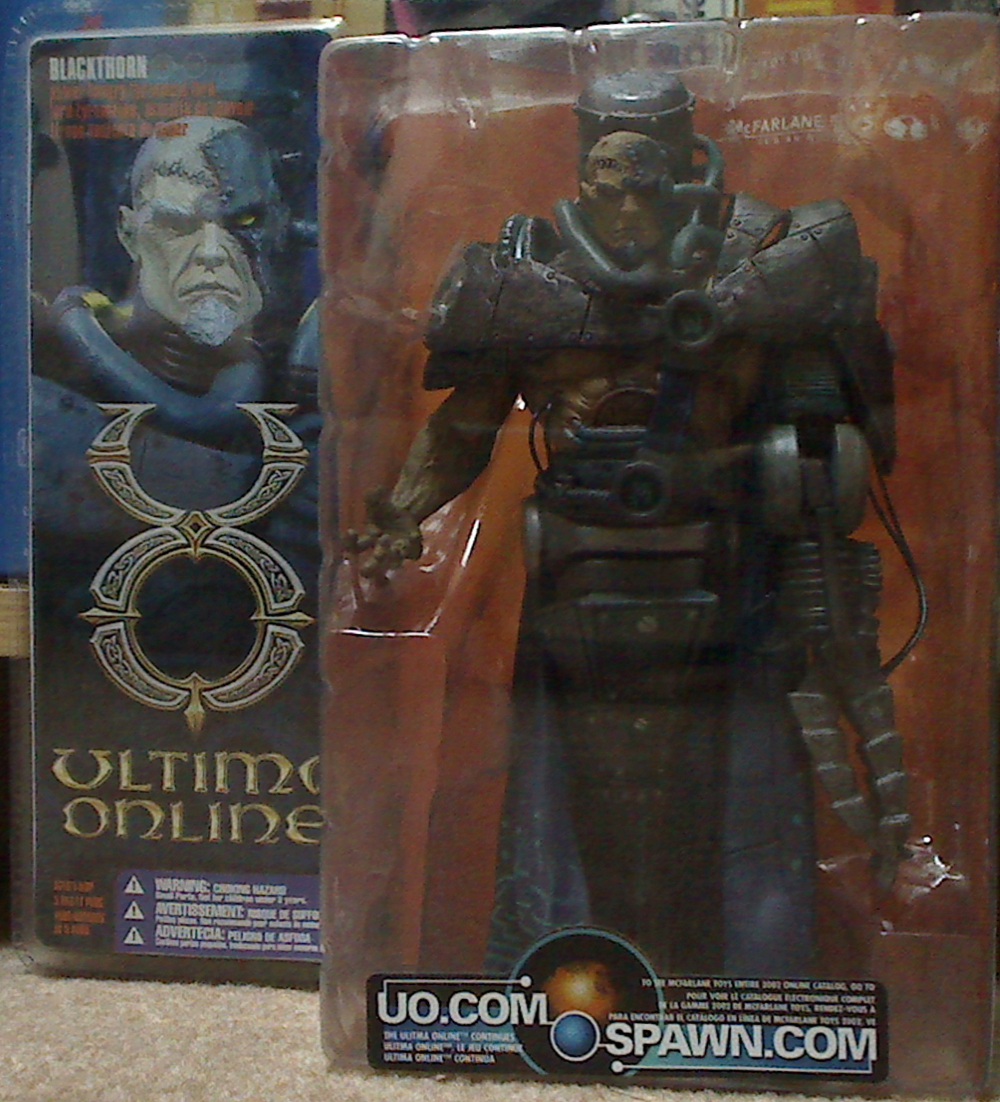 How this could ever be marketed as an Ultima Online figure is beyond me, but it certainly stands as a curiosity. I vaguely remember a similar screenshot being released back when UO2 was being developed to vast outcry from UO2 fans. Since I had little interest in UO in the first place, I didn’t pay this controversy much attention, although I would probably side with the people who hated it. Looking at this guy I can’t help but feel he belongs more in a He-man cartoon than an Ultima. UO2 wasnt all cyborgs though and the other 3 figures of this size were along more traditional lines:- 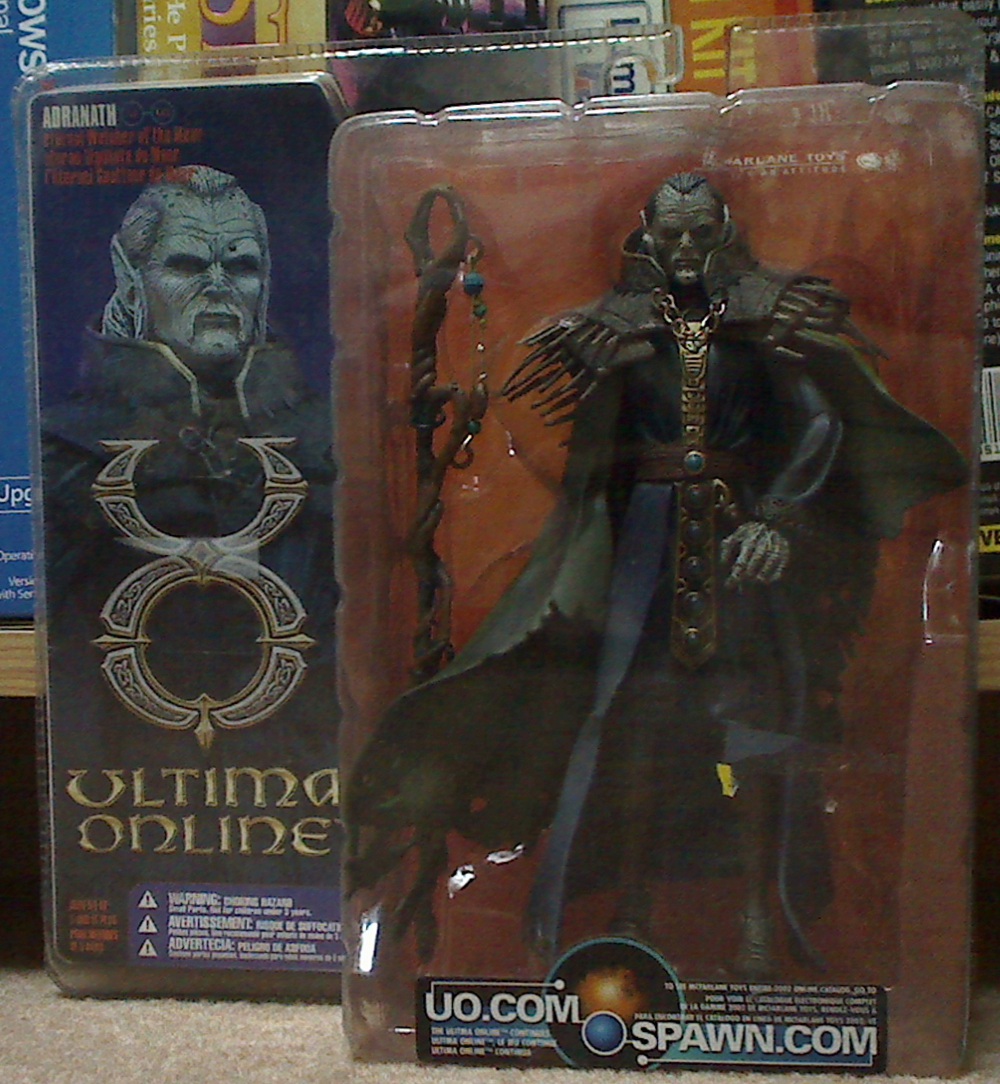 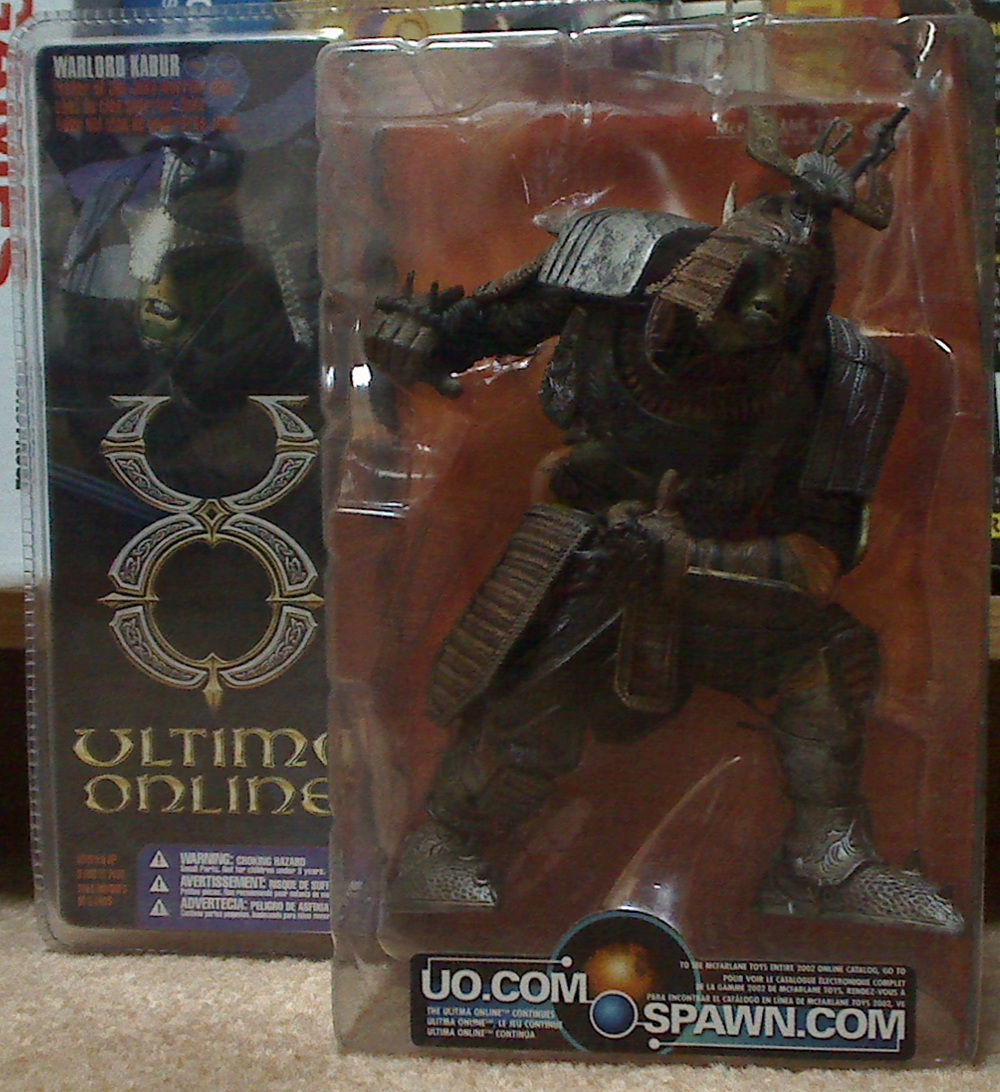 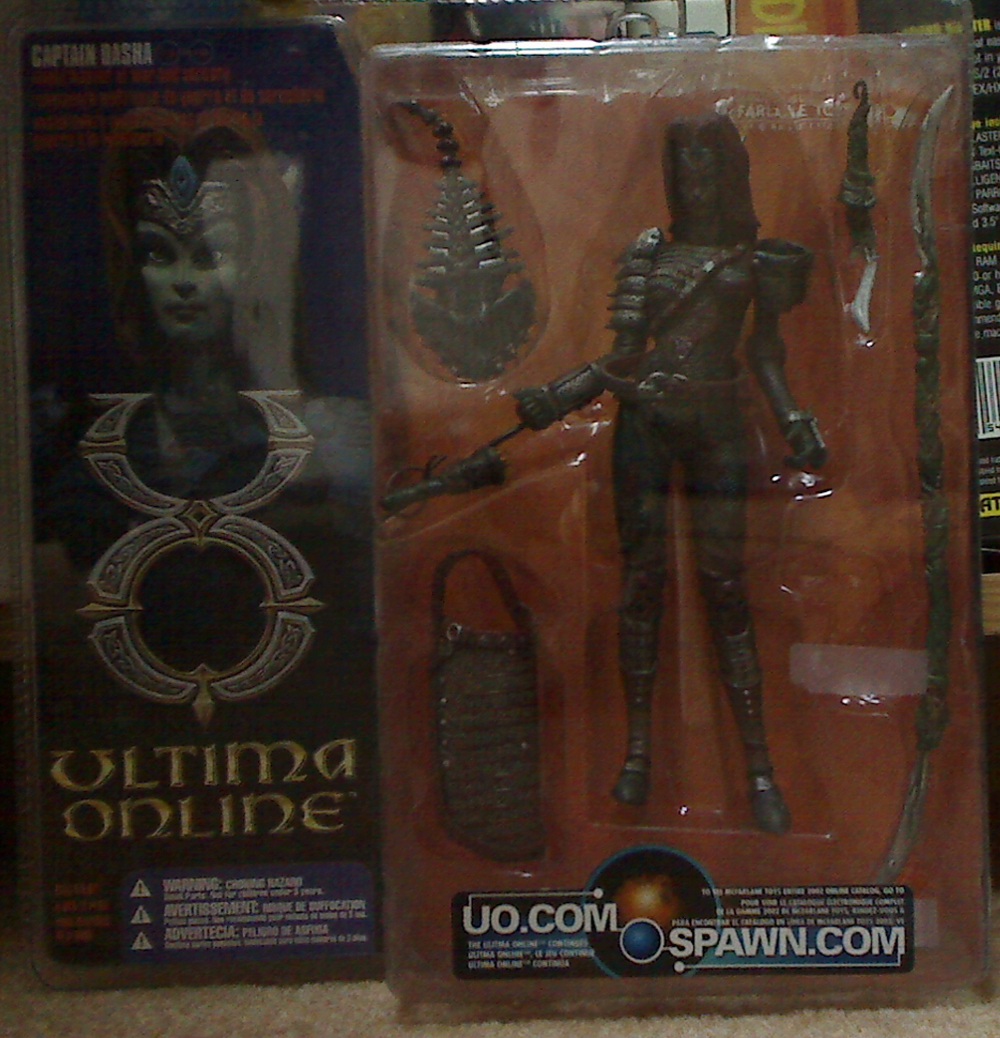 The final two figures are larger than the other four and slightly more expensive. First off, it’s back to the technology/fantasy mix with Juggernaut. Part troll, part steam engine, part shopping trolley. 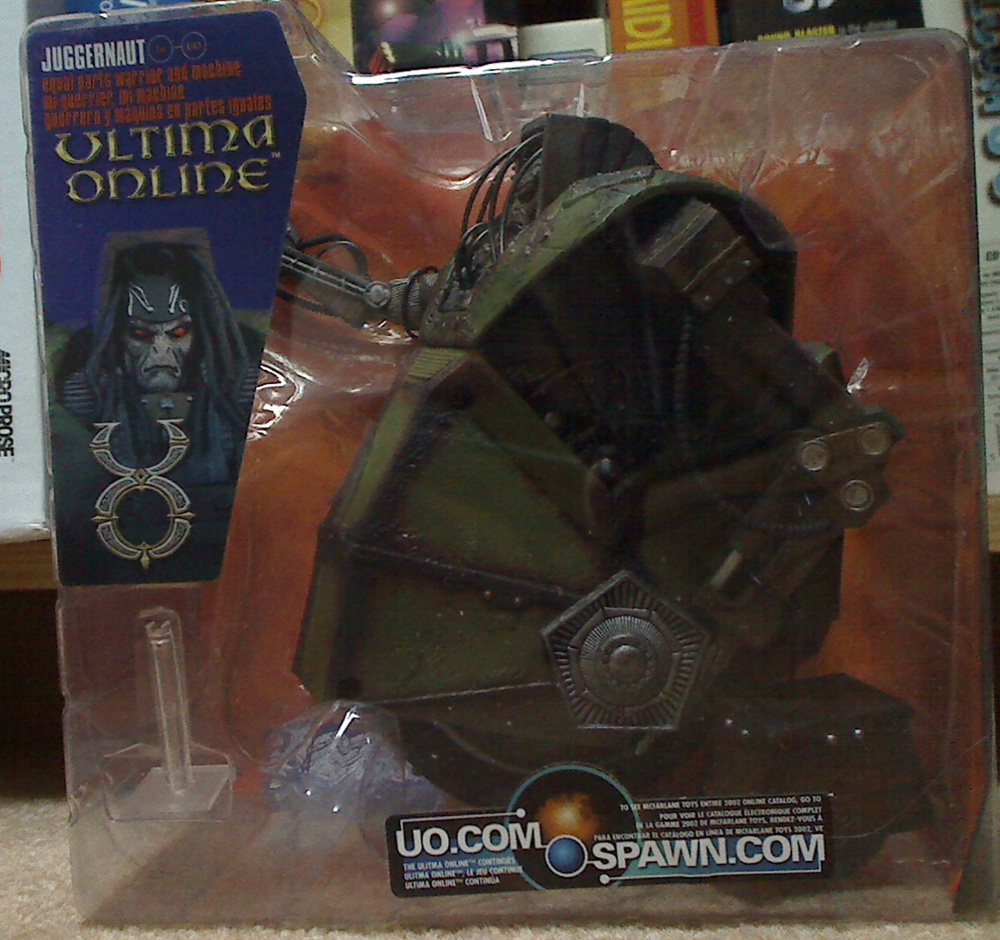 The final figure was the most expensive to get hold of costing me about the same as all the others put together (still not that much). It’s the largest and most traditional, being a fairly standard dragon although it does have transparent panels on the wings and a base to stand on all of which you won’t see in the picture here. 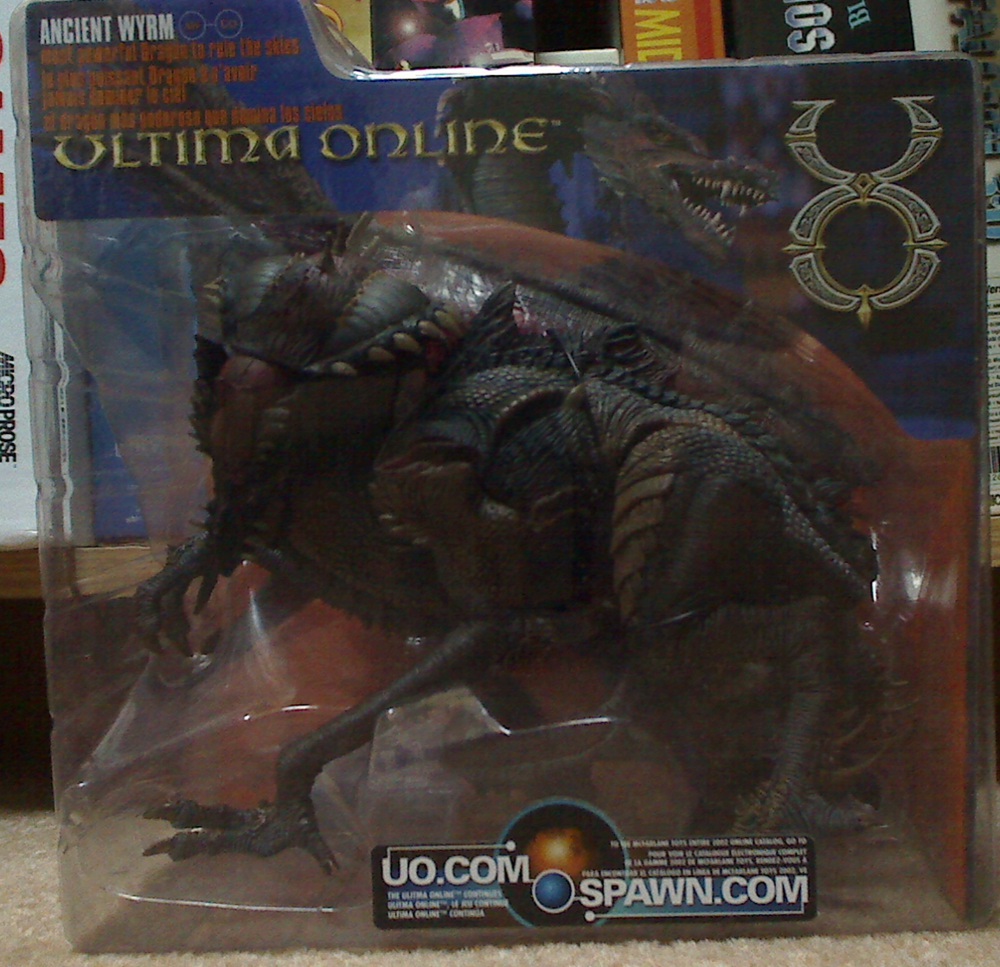 I’ve not actually taken any of these out of their packaging, so I can’t go into much detail about the figures themselves. They look well made, but nowhere near as detailed as on the box art which is one of the reasons why they are remaining sealed. They is still a reasonable amount of detail, especially the dragon, but I’m less than impressed with Captain Dasha who is looking very strangely proportioned and rather like she has been stuck together with body parts that don’t quite match up with each other.
It’s curious how little there is about the actual character on the box as you barely get more than the name. For instance Blackthorns description is power hungry tyranical lord, possibly accurate but I can’t help but feel that some of the subtleties from the Ultima 5 character have been lost somewhere along the way. Maybe they will all be characters in the 3 Ultima novels when I get around to reading them.

I’m not someone who holds much interest in action figures, these are purely part of the collection due to the Origin link. They have found a place on top of all my bookcases but aren’t especially decorative if I’m honest. I may well relent and take them out of the packaging at some point so that they are at least undecorative in less space, but for now I’ll leave them as they are. Picking these up got me wondering if there were any more Origin figures and I came across these two horrors on Ebay:- 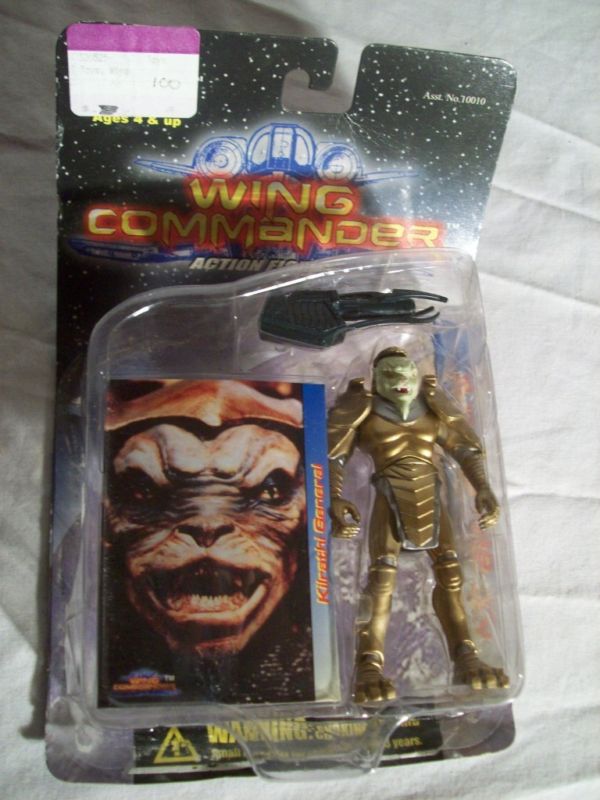 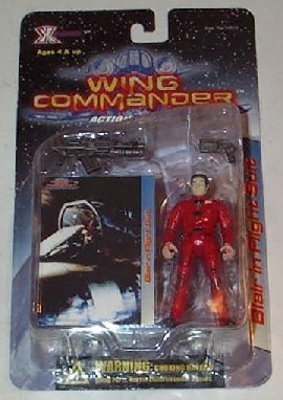 Even the obsessive collector in me, can’t bring me to part with money and actually bid on these things. I’d like to hear if there were any other toys related to Origin games though. I’m not especially anxious to add any more to the collection in general, but there would be a definite appeal to a Crusader figure……