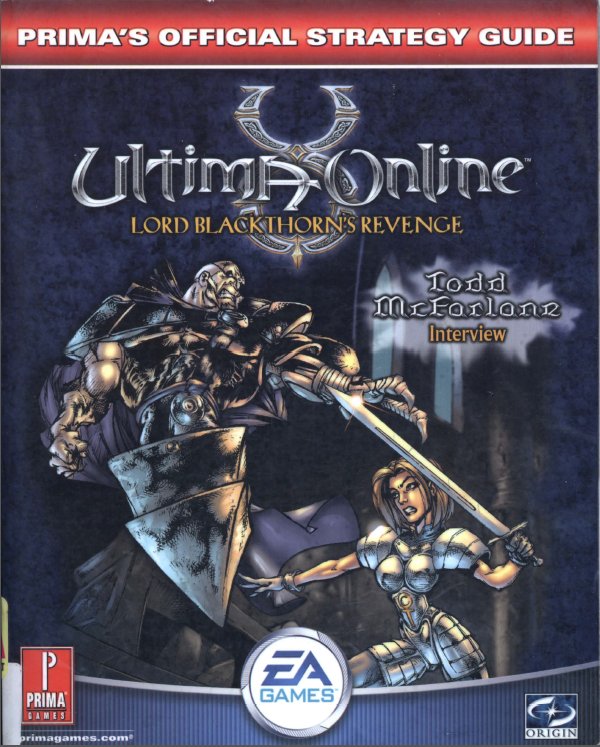 This is the third Ultima Online guide I’ve looked at from Prima and was published in 2002 for the Lord Blackthorn’s Revenge add-on. Third Dawn didn’t get a guide as far as I know.

Rather than rehashing the last guide, most of this is a complete rewrite. It’s obviously covering a lot of the same ground though so it’s quite familiar. The early stages very much take the form of a manual to the game, with loads of presumably useful information but nothing much entertaining. It does tell you more than the previous books by the looks of things, but still refers you to the website for advanced subjects. The latter parts deal with all the monsters and maps of all the locations.

As before, the guide is definitely aimed at newer players and there is nothing spelling out the differences between the versions but a lot of time spent introducing the skill system. As far as gameplay changes go, I gather there were now three nearly identical continents to the game though each with different rules regarding PKing and the like, and the interface appears to have changed substantially with Third Dawn. You could now join factions in the game and be at war with any other factions, allowing for a sanctioned form of PKing which I don’t remember being mentioned in older guides.

Since I’ve not played and don’t have much intention of playing Ultima Online anytime soon, the best parts of the book for me were in the middle sections dealing with the story and background of the UO world to that point and there is also an interview section.

The background info mentions a few familiar names that had made an appearance in UO by this time including Minax, Exodus and the Shadowlords. Lord British is missing/on holiday presumably due to Richard Gariott having left Origin by this time. Blackthorn has apparently been given a cyborg body by Exodus, bringing in the steampunk aspects of the UO2 design after it was cancelled. There are some new races which are also straight from UO2 as are monsters like the Juggernaut.

There are a few short stories about battling Exodus and also characters from Britannia having prophetic dreams about what is to occur on the world, which I presume have been lifted from the UO website at the time. These dreams basically deal with new races that will shortly be invading Britannia. None of this sounds very much like the Ultima I know and UO was evolving well away from its roots.

Having said that, Origin had started implementing a virtue system by this point which had only gone as far as humility. This involved players sacrificing fame in order to build up their virtue levels which offered some rewards such as an instant resurrection once a week.

The included interview is with Todd MacFarlane who was brought into UO2 to design monsters having previously worked on comics among other things. He was more or less responsible for the cyborg-Blackthorn that everyone hated so much in the UO2 previews. His team came up with 40 monsters/characters for UO, some of which apparently ended up becoming more major characters than intended because people liked them so much.

I don’t know much about Ultima Online in general and next to nothing by this stage in its life. I didn’t even know that any of the UO2 creatures ever ended up in the game before reading through this book. As such, I can’t offer a meaningful review but it looks like a decent enough guide, with a few things to pique my interest even though I’m not into UO. It’s scanned in with the rest anyway so you can judge for yourself.

There is one more UO guide for Age Of Shadows left to go before Origin officially closed which I’ll have a quick look at next to finish them off. After that, I can get back to the games I’ve actually played. I’m playing through Fallout 3 at the moment but I think the next guide is going to simply be a rehash of this one so expect it to follow shortly.