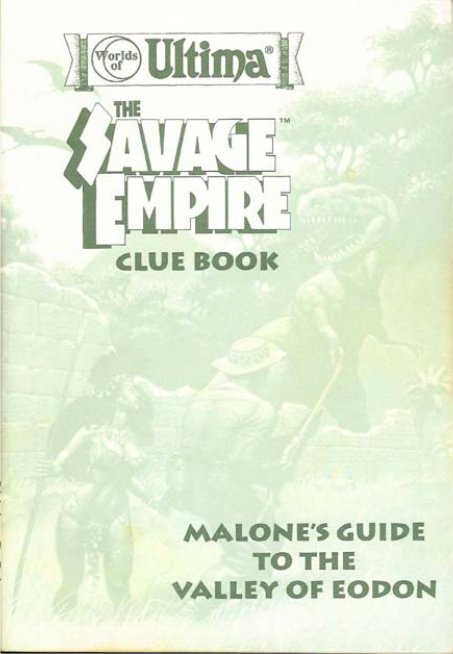 There isn’t a whole lot to say about any of today’s cluebooks so far and I’m rattling through them. I’ll need a few days like this if I’m going to get through all of these by the end of the year. This next one was published by Origin in 1990 and is a similar format to the U6 book, this time with a green monochrome cover rather than the purple one. If anything this looks even cheaper since it doesn’t have the glossy finish and it’s a little dissappointing coming from someone like Origin. It takes the form of a guide to the Eodon valley, as written by Jimmy Malone after his adventures with the Avatar and is available to download from http://www.replacementdocs.com

The first thing that strikes me with this cluebook is the amount of artwork on it’s pages. The other books were fairly sparse whereas this is crowded with drawings, including a full bestiary with sketches of most of the creatures.

This is the first Origin cluebook to go out of it’s way to explain the backstory of the game. Most of this was told in the game through conversations but certainly not written down chronologically like this. There is a brief history as to how the valley was formed by a moonstone meteor and the history of how it ended up as it is. While this is a little far-fetched it fits in well enough with the sci-fi B movie theme.

The middle of the book is the typical guide to locations, and this is followed by a walkthrough through Jimmy Malone’s eyes where he relates the adventures in the valley. This is a twisted view of the real events where he apparently led the party himself and he portray’s himself as the hero of the piece. This is fairly brief but gets across everything you need to do to beat the game in an entertaining manner.

That’s the last cluebook I’ll be reading today. It might have looked the cheapest on the exterior but it has some of the best content of any of them. It’s certainly the most enjoyable to read, and probably helped by having less information to get across than the larger games in the main series. All of these cluebooks have been well presented though, and are far better than a dry walkthrough. Anyone interested in Ultima who hasn’t read them should head over to replacementdocs.com and get the lot of them downloaded.