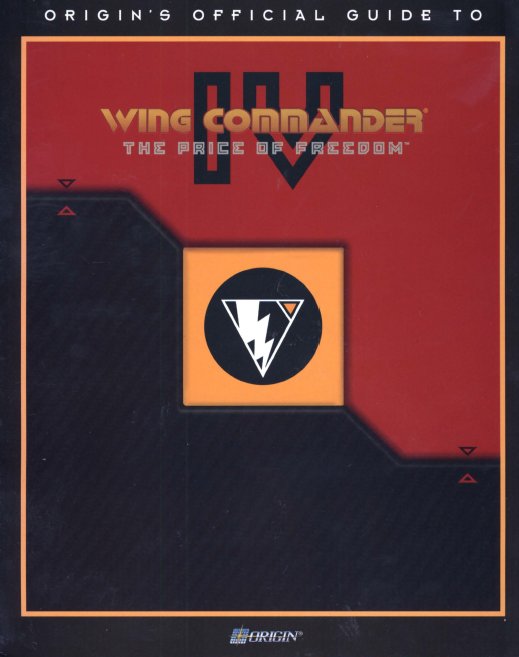 This was published by Origin in 1996 and is now in the downloads. It starts off with the first 48 pages in colour before dropping off to black and white for the rest of the book. The colour pages are for the most part, a load of images from the movie sections of the game with a brief caption underneath detailing the story. I’m not sure what purpose these are supposed to serve and it’s almost wasted pages as far as I’m concerned. I suppose the pictures are better quality than the original release of the game but anyone who owns the DVD version of the game would be better off watching that. There are full colour images of all the ships from the game with specs after this. These are the full detail ship models from the movie portions of the game and are a better use of the pages as you never got to see them in this much detail in the game.
After this is a brief history of the story so far. This goes through each game and mission pack, and surprisingly each of the novels to that point is also mentioned.
The third section gets into the mechanics of the game. This is more or less than same thing as the WC3 guide although it’s interesting that a lot of it got simplified down for WC4 with the morale system all but removed with only 3 characters affected by your choices. This section also has backgrounds of all the pilots including the more minor characters that you never actually meet outside of a cockpit and are all based on people who worked on the game.
Most of the second half of the book is devoted to the mission details themselves, with rundowns of every mission in the game and how the branching works + a few hints and tips. I only skimmed over this section as there didn’t seem to be much of interest for anyone who has already played all these missions.
The final section is a short series of interviews with a few of the developers. There isn’t a whole lot in here that stood out either. You definitely get the message that they were concentrating on gameplay for this having being bogged down with technicalities in WC3.
I didn’t get a lot out of reading this guide. There is nothing wrong with it as such but a lot of the tactics are straight out of the WC3 guide and I already knew the mission structure fairly well.
The one thing I did learn is that there is an alternate ending if you sympathise with Hawks point of view and blow up the superbase when trying to get to Earth. It doesn’t actually tell me what this ending is but implies that my choice of career would be different. I’ve never made that choice when playing the game but I must have seen this other ending at some point when watching the VOB’s on the DVD version. I don’t remember it at all so I’ll have to dig out the DVD and have a look.