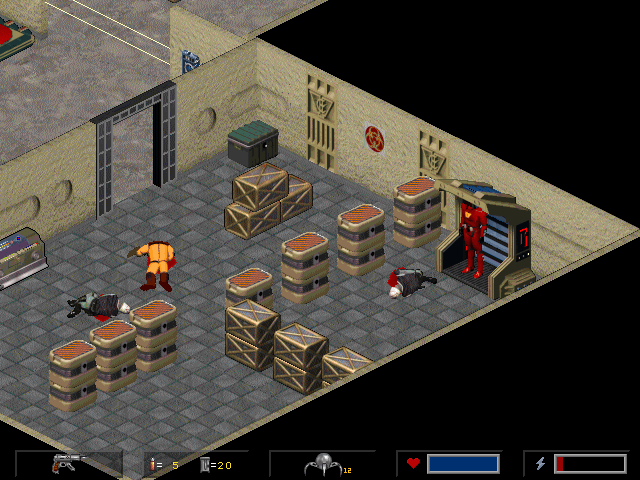 My second mission plays out much the same as the first. I find an energy equivalent of the health stations which partially recharges my energy. This energy seems to be just used for my shield and I lose less health while I have some energy left for each hit. 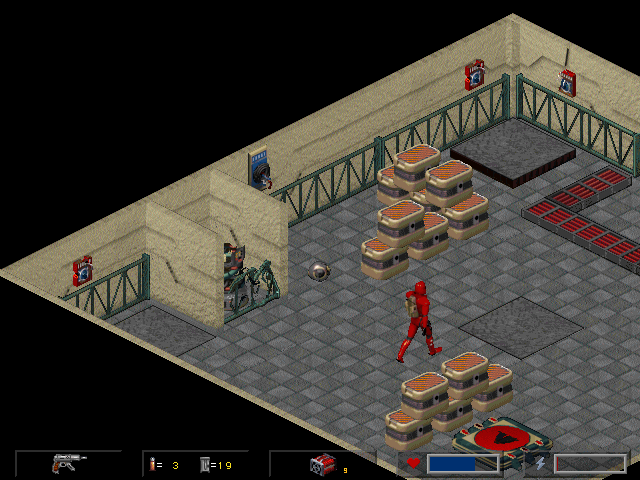 There are some simple puzzles built into some rooms such as this one where I have to walk on a series of raised plates to lower them down into the floor. There is nothing more complicated than the sort of thing you might have seen in a game like Doom. 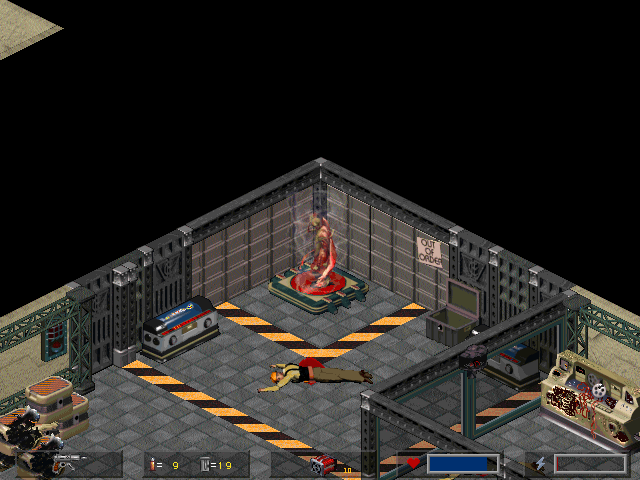 I do find a new way to die by stepping on a faulty teleporter. 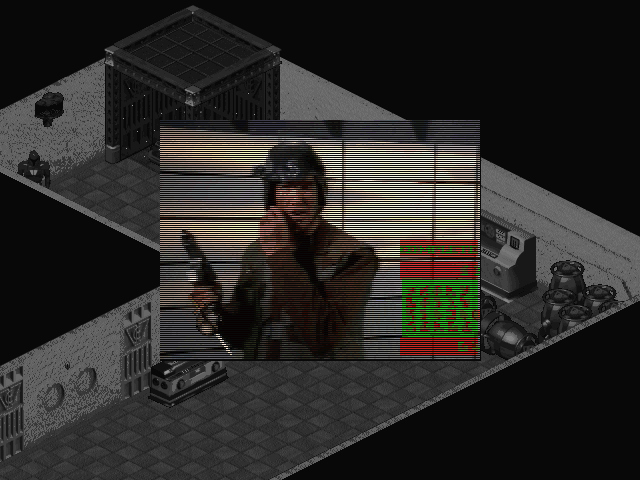 When I get near to a teleporter I get a message from another resistance member who is clearing the way for me that he has set me up to teleport near to where I need to be. 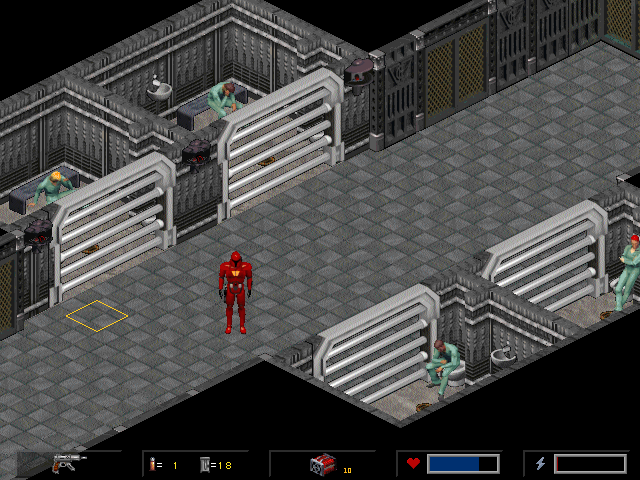 Its a short trip from there to the prison cells complete with captured rebels. 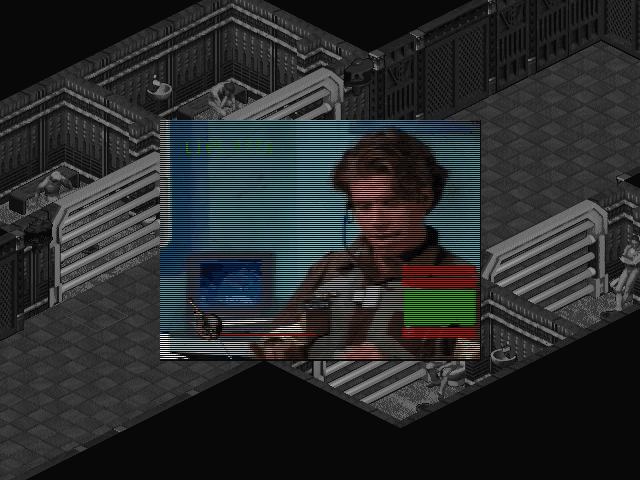 As soon as I find the prisoners Reaves in on the comm telling me he has set up a teleport to take them to. 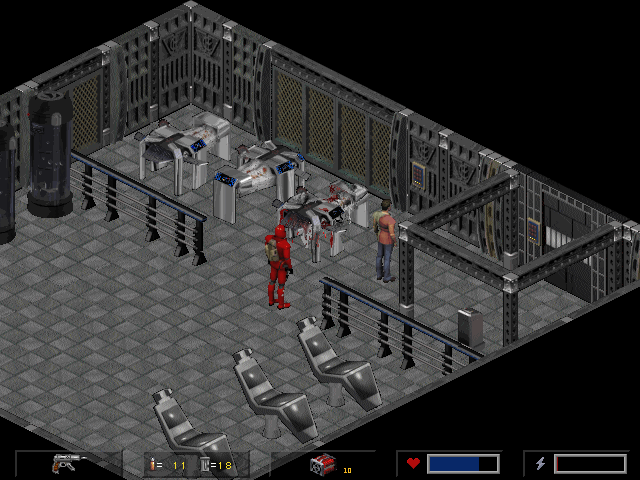 I look around for a switch to release the prisoners and run into the WEC’s doctor. 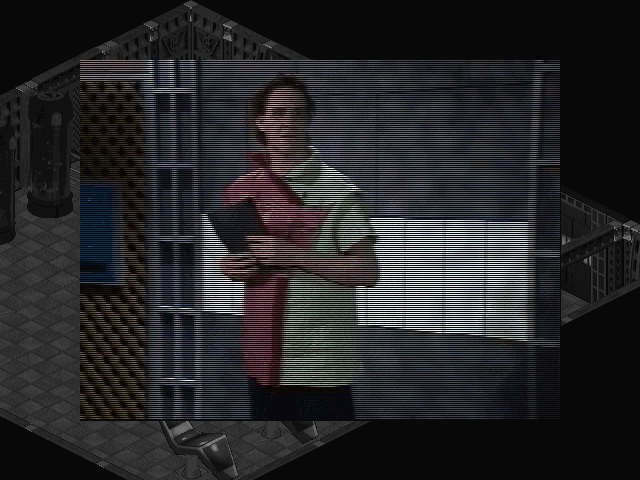 This guy has been performing some sort of experiments on the prisoners but I don’t find out what. He says the prisoners won’t be any use to me in the state he has left them then ducks behind a forcefield and runs off. 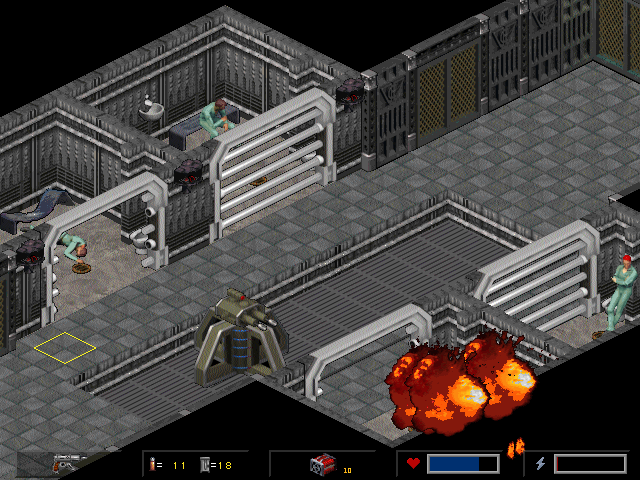 On his way out he presses a button and a gun pops out the floor to kill all the prisoners. 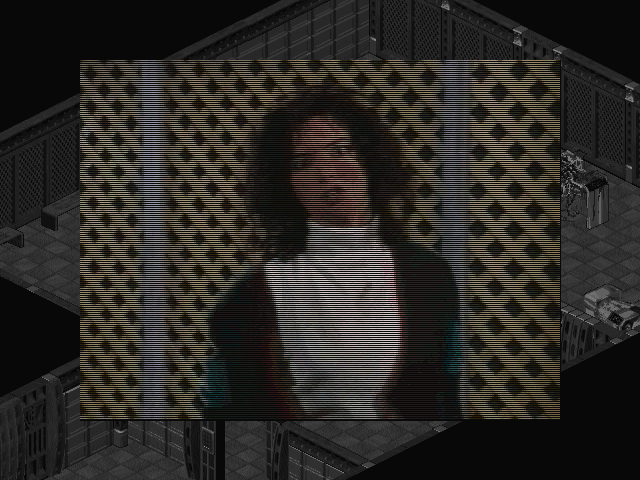 I chase after him and manage to find one prisoner still left alive and we teleport out together. 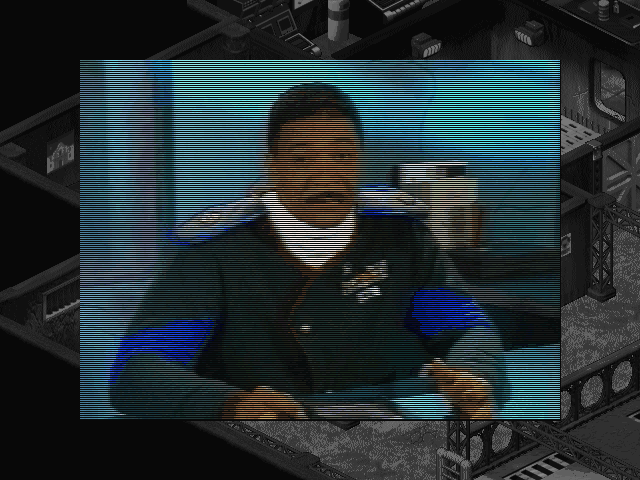 My next mission is going to be to try to get the plans of one of the security bots. 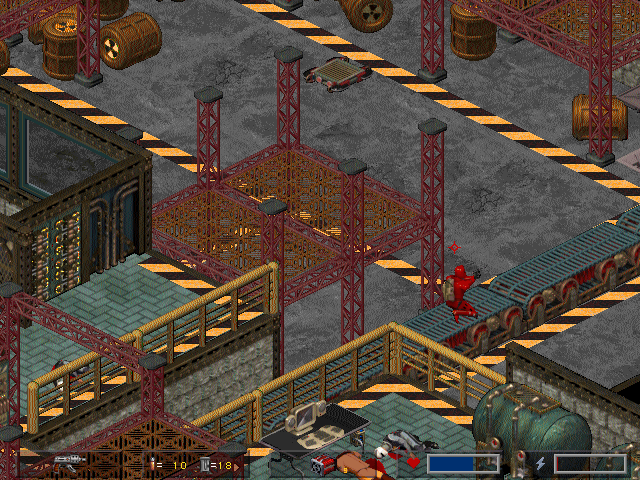 The level looks much the same but is set up as a factory with some moving conveyors and the like. 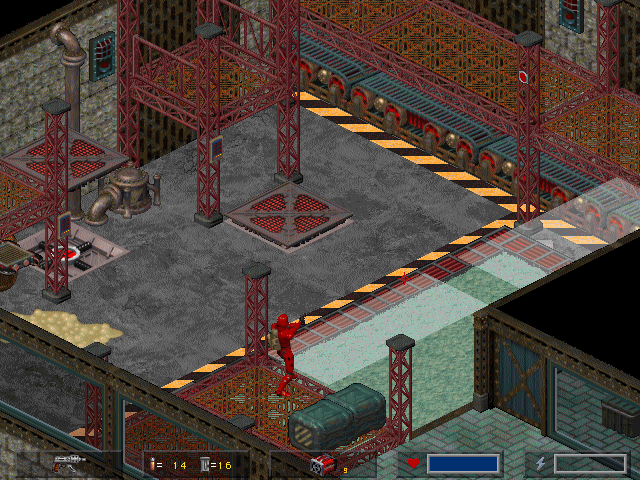 There is just enough new to keep it fresh with things like this light bridge where I have to time a jump across the moving gap. 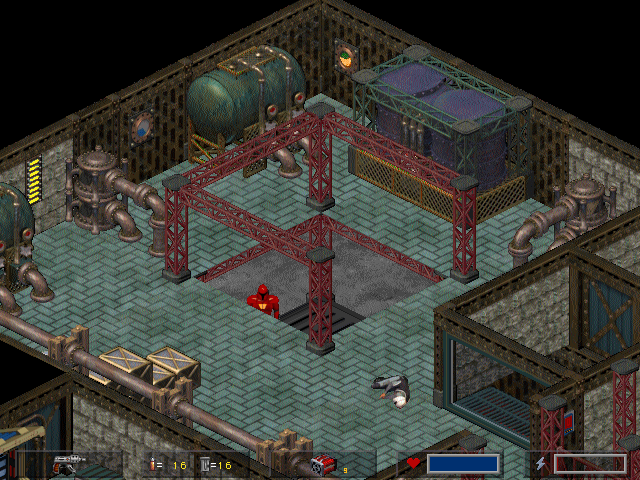 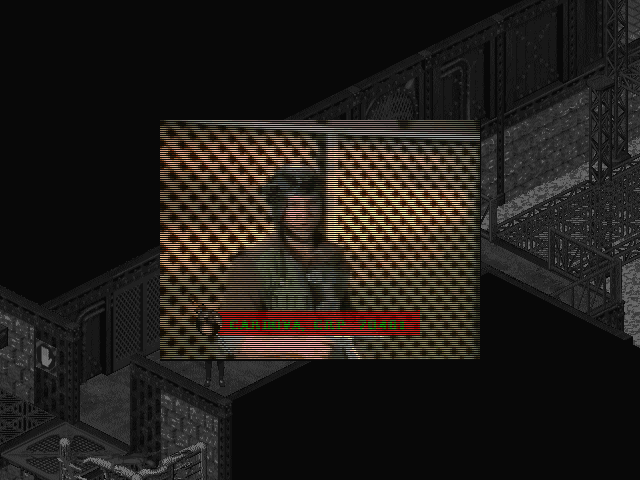 I work down a level via some giant lift and get a message from my rebel chum who is clearing the way for me again. 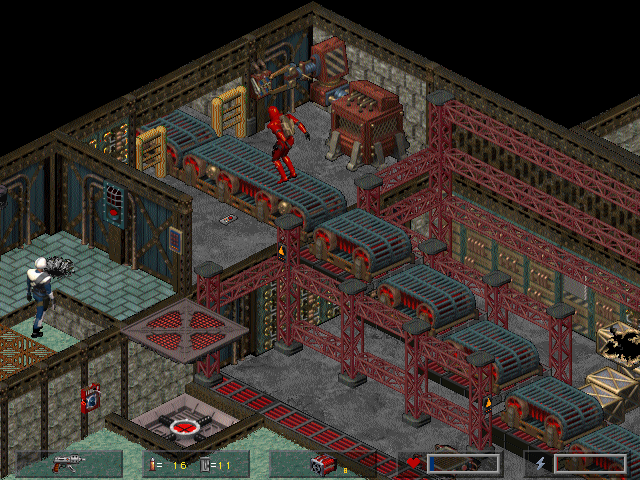 This level is another keycard hunt with several of them spread around the place. They are also turning out security bots which can be a bit of a pain. I run away as much as possible and in the end shut down production by blowing up some generators. 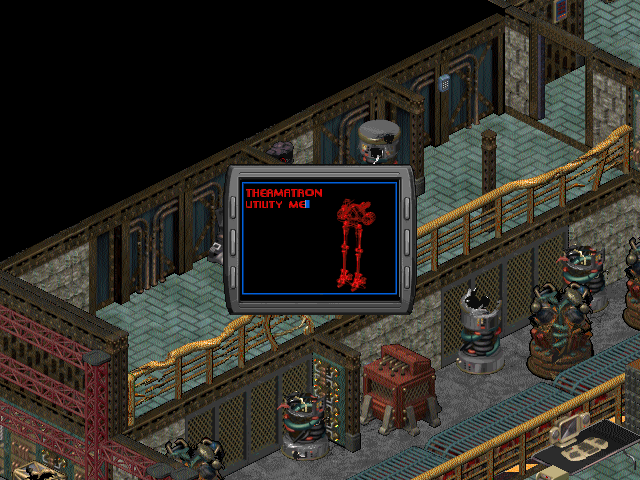 I find the plans and head out by the nearby teleporter. 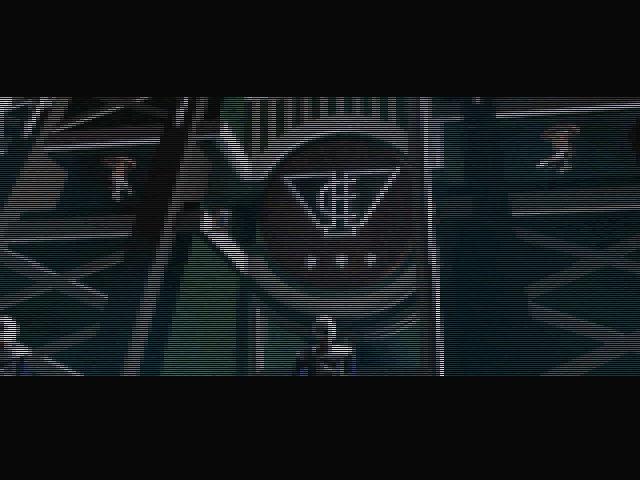 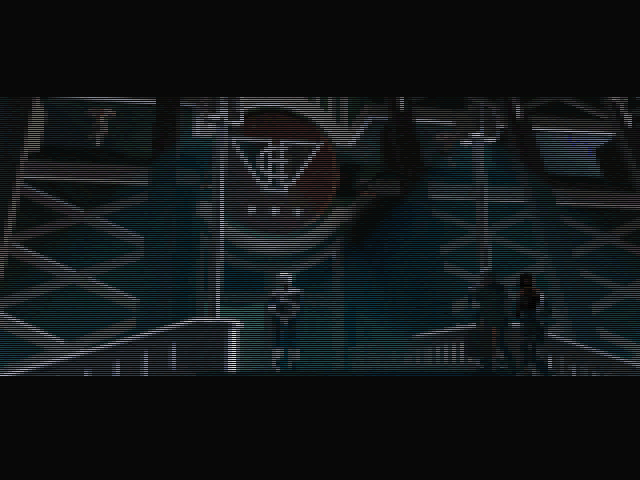 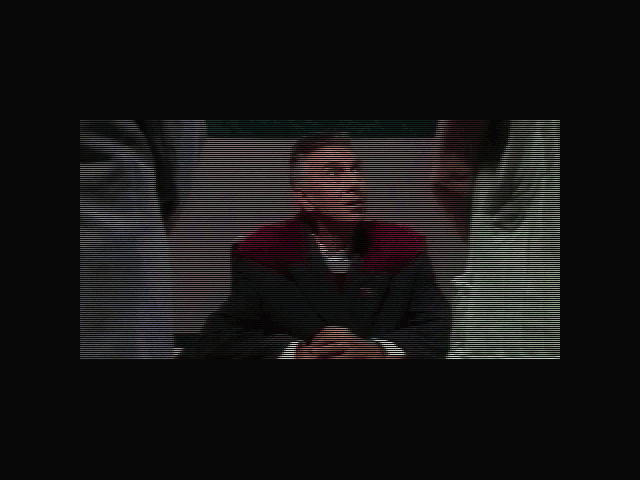 I get a cutscene now showing all the head honchos at the WEC discussing Operation Vigilence (whatever that is) which is going to be put into practice very soon. I’ll no doubt hear more on this later. The doctors experiments form some part of it – I’m expecting some sort of cyborg at this point but I can’t say I remember the plot after however many years.

I’ll leave mission 4 for another day. I’ve not seen a lot new in todays missions but the formula hasn’t gotten stale quite yet. This does look like being one of those games that isn’t quite as good as you remember when you go back to it though. It does have possibly the worst acting I’ve even seen in an interactive movie (which is a redeeming feature in my book) but I have to get through some lengthy levels to get to it.  The gameplay is quite good – its just all a bit too similar so far.   There certainly isn’t much for me to write about so expect some short posts over the next few days.