This game is a bit of an oddity in that it was released entirely for free over the internet. I was led to believe at the time by a games magazine that it was something of an apology to the fans for Prophecy but I’m sure that can’t be the case. It was released with one giant (at the time) first download, with some much smaller ones released each week to make up 7 episodes in all. You didn’t even need to own Prophecy to play this game. It was a uniquely generous gesture by EA and I have to wonder how it came about. The snag was that here in the UK at 3k a second and 2p a minute the download was hardly free. In fact that would put the whole games cost in phone bills up to about £15 if the download went perfectly.

This huge download stopped me playing the game until it was included on a magazine cover CD. I’m coming back to it now and I remember nothing about it. Literally nothing. This can’t be a good sign that its particularly memorable although I’ll find it hard to be overly critical about a game that was given away.

Being a free and downloadable game, the FMV has of course gone. It was replaced by emails, news reports and the like which could be read on the games website each week while you were downloading. I definitely didn’t read these the first time around so I’m hoping to get more out of the game this time. Having just gone through the prelude and chapter 1 text, its all written quite well. I could even argue that this is better than the FMV it replaces as there is more content here.

For all the text there isn’t that much story, however. In brief the Midway is having a celebration tour of Sol and other systems and in the meanwhile Casey, Zero, et al are being transferred to Confeds newest ship the Cerberus. This is some sort of strike cruiser which is smaller than the Midway but quicker and more deadly. 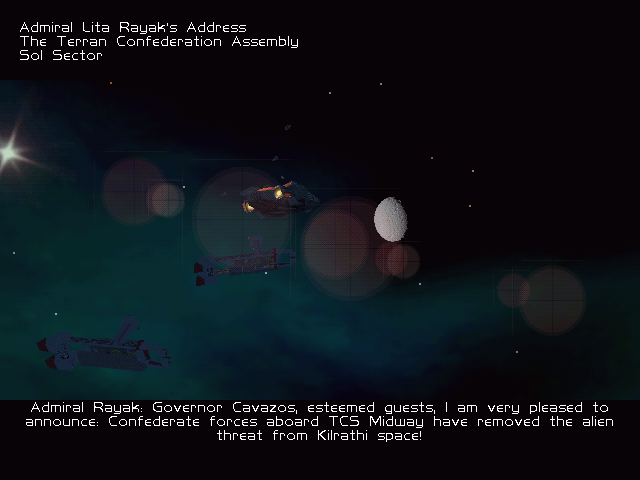 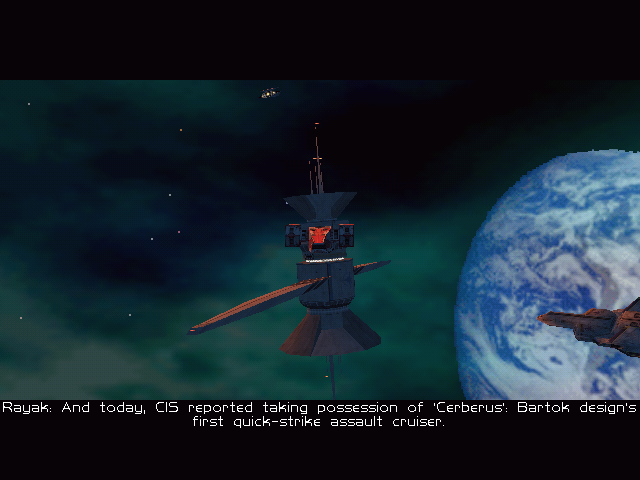 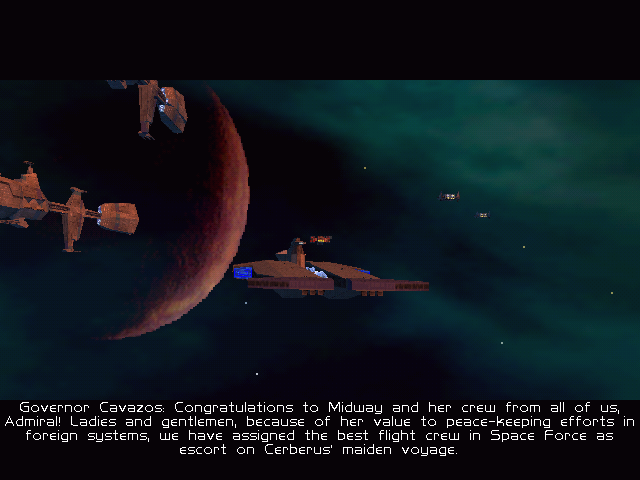 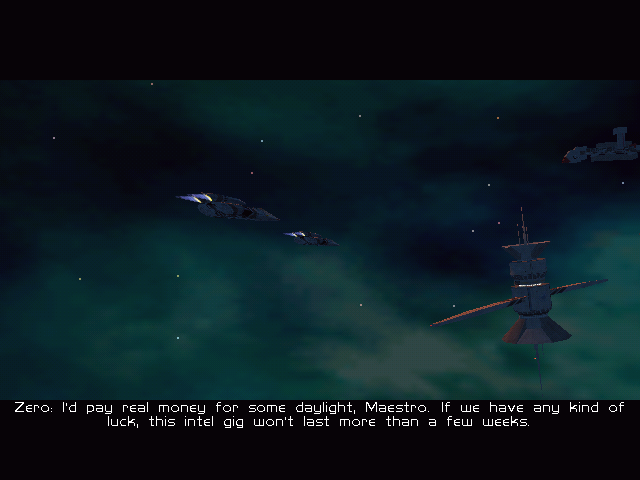 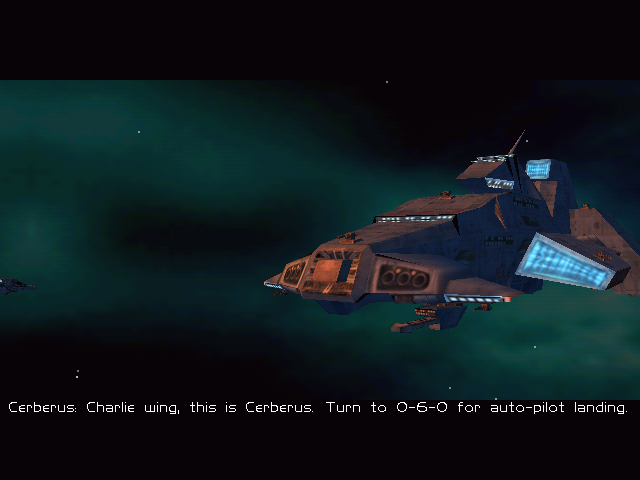 With no FMV, any cutscenes are going to be done using the game engine. This doesn’t give you many options in a space sim so I can expect loads of flybys. The original actors have been brought back to voice the characters which is highly surprising in a free game. The voice for Casey doesn’t sound right though so I guess he was too expensive. 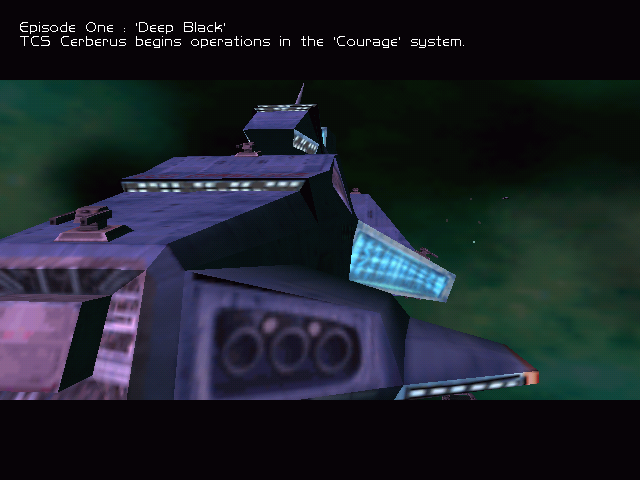 The intro shows me, Zero, Maestro, etc.. on our way to the Cerberus while the victory celebrations go on for everyone else. The Cerberus isn’t the most impressive model – its definitely not up to the standards of the Midway or the alien capships so the games free roots are showing right from the start here. 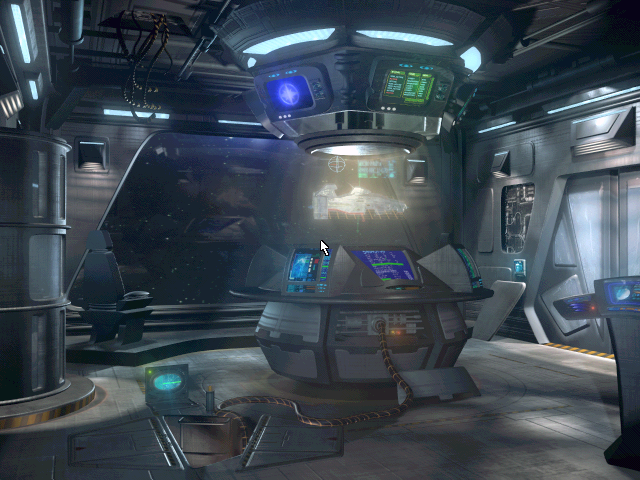 There is no walking around the ship any more. There is just the one screen with everything on it. 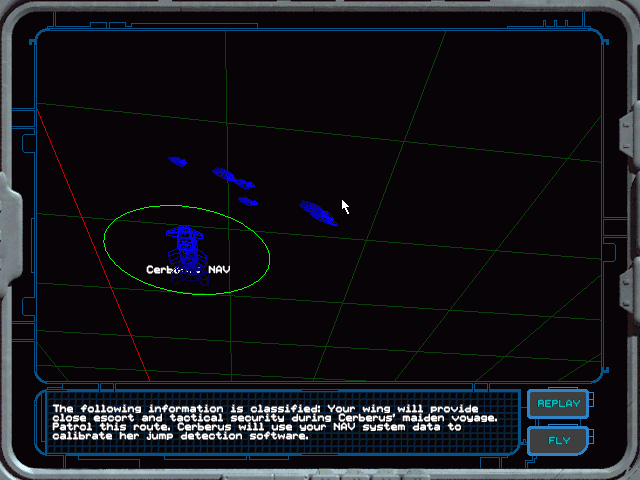 I’m hoping for some more interesting missions in this game but I probably shouldn’t expect too much in a freebie. First up is a straight patrol. 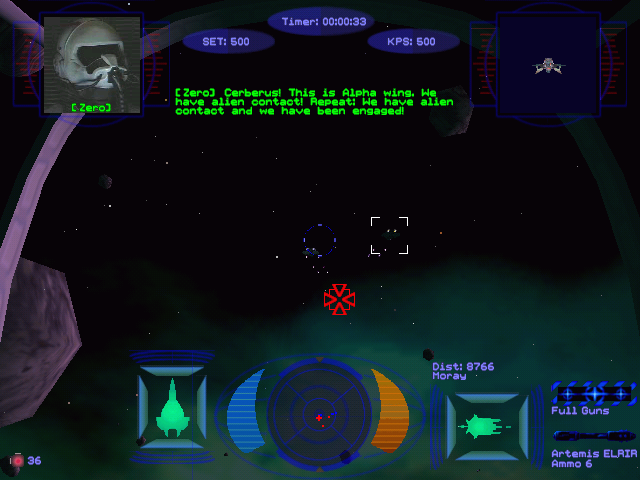 There aren’t supposed to be aliens this near Earth but we run into them all the same. 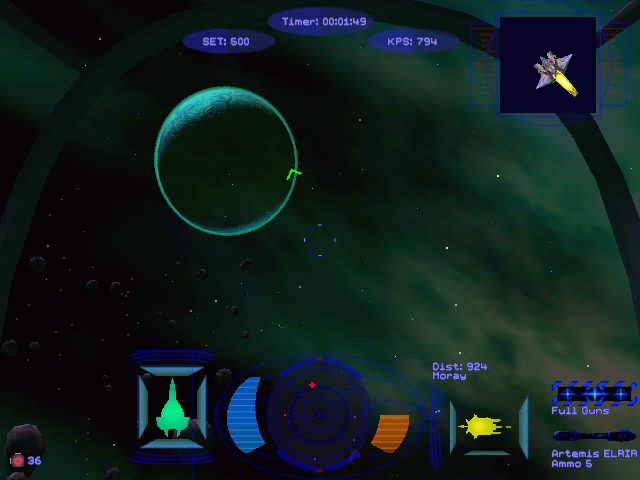 The combat is much the same as ever. We have some new guns and missiles – nothing too exciting but they are different at least. The aliens also seem to have some new weapons but the same old ships. There is a new planet in the background also. 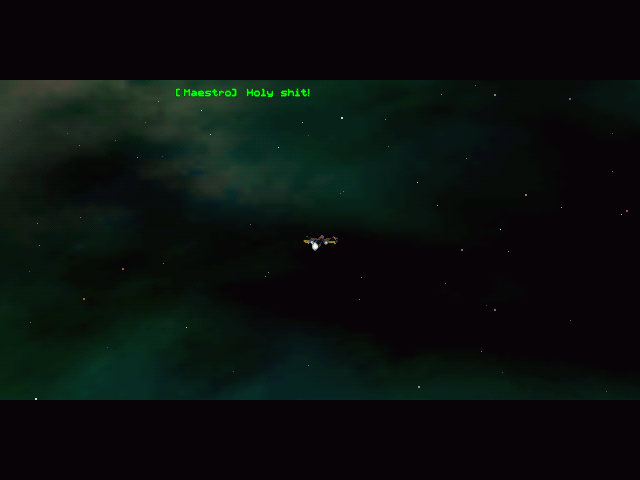 Next mission is an emergency scramble to protect the Cerberus. We are in all new Wasps for this. I already liked the old Wasps but these pack even more of a punch. 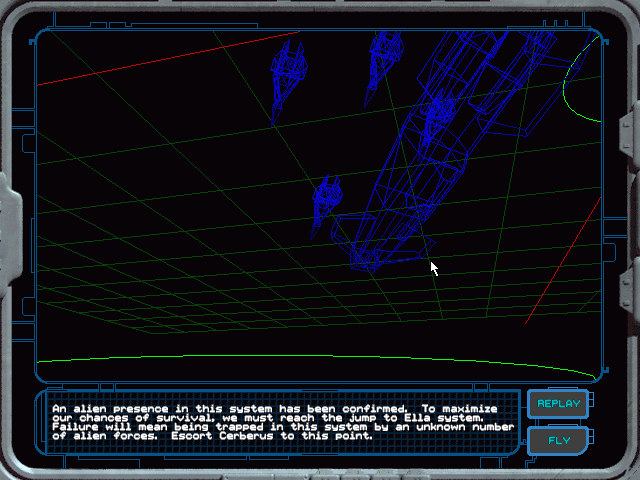 We have to escort the Cerberus to a jump point next. 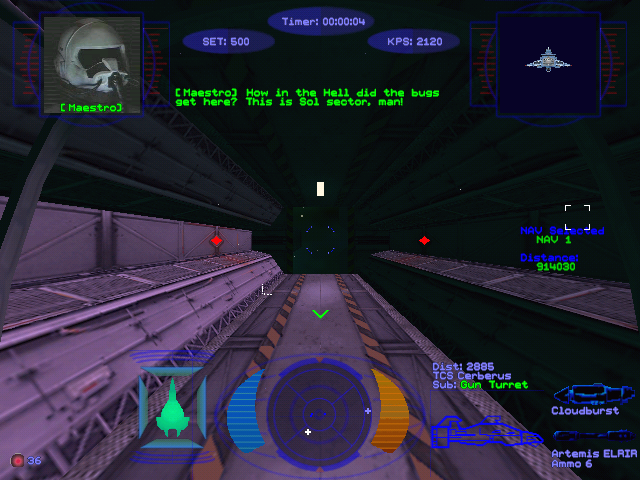 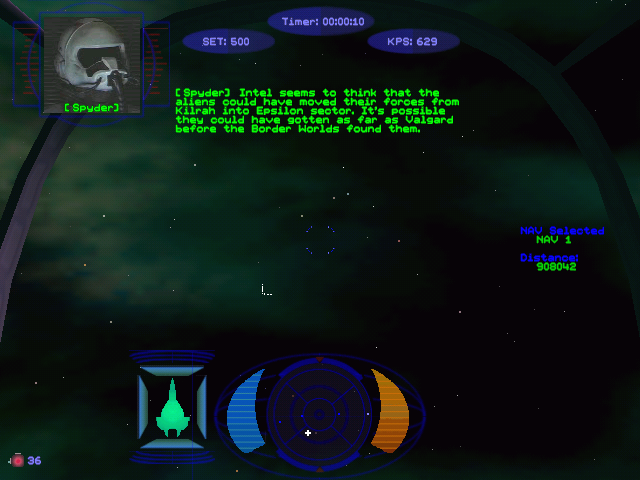 There is a bit of chat about how the bugs got here in the first place. My money would be on a new gate but I’m only guessing. 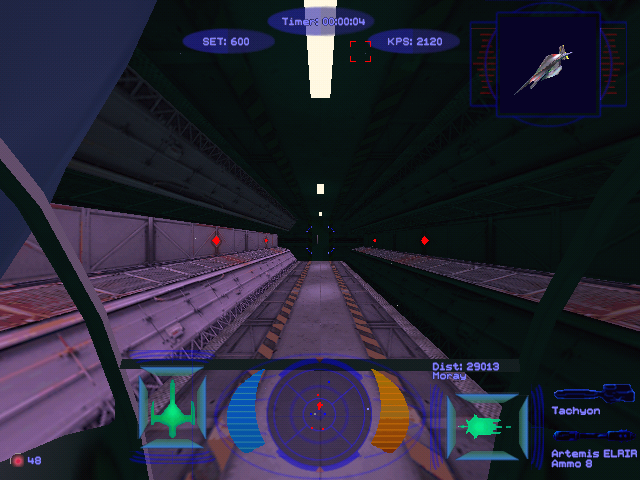 We get the Cerberus to the jump point only to have another scramble mission. 2 scrambles in the first 4 missions is not a good sign of variety to come. 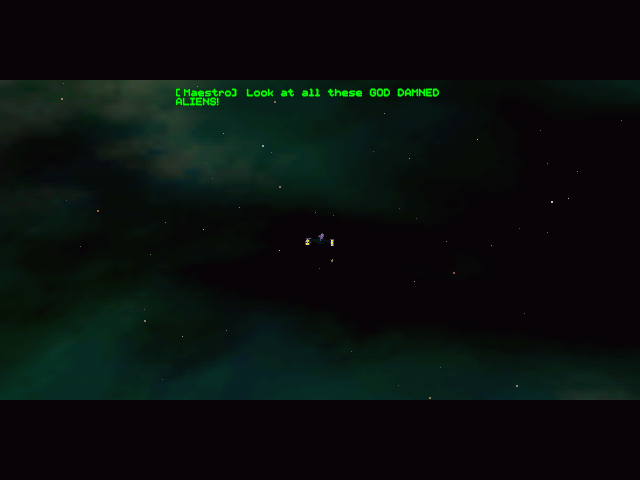 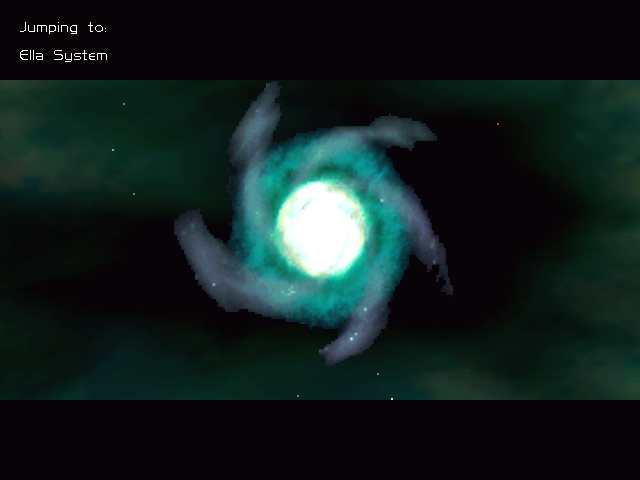 Once its safe, the Cerberus jumps out and that finishes the episode. 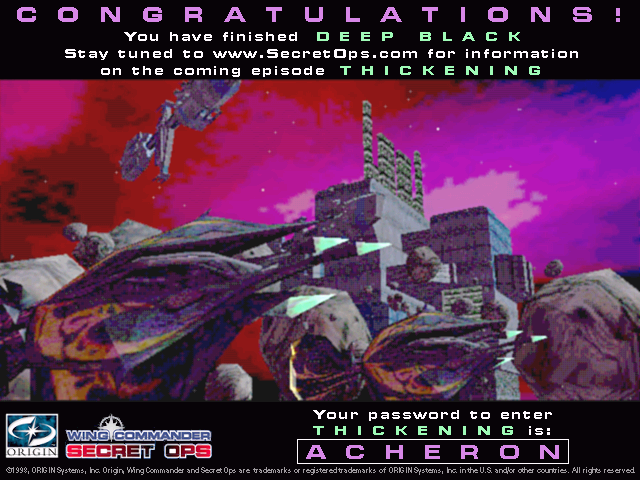 It’s been pretty quick playing through the episode. This gets me a code to enter for the next one which will carry over my performance for the winning/losing paths.

There wasn’t much sign of originality in these opening missions but I’m not so bored with WCP that I can’t enjoy them anyway. I still don’t remember anything about the game except two of the new pilot phrases (Zeros “Dead bug” and Spyders equivalent) are incredibly familiar and must end up being repeated ad-infinitum for them to stick in my mind like that.

Unoriginal or not, this does not play like a free game. The engine was still state of the art when this came out and it plays as well as WCP ever did. I’ve said it before but giving this away was unbelievably generous. It just seems completely out of character for a company like EA who would be more likely to change the character names, rebrand it Prophecy 1997 and charge you the full price.

This game makes more sense just playing one episode at a time and the repetitiveness isn’t an issue. I think this has been a problem in general with some of these games as I’ve rushed through them in a few nights. If I hadn’t done that I’d still be playing through them in 2 years time but having got this far I guess there is no rush any more. I’m going to attempt to play one episode a night from here on out, making sure to read the text that went with each one as I go.