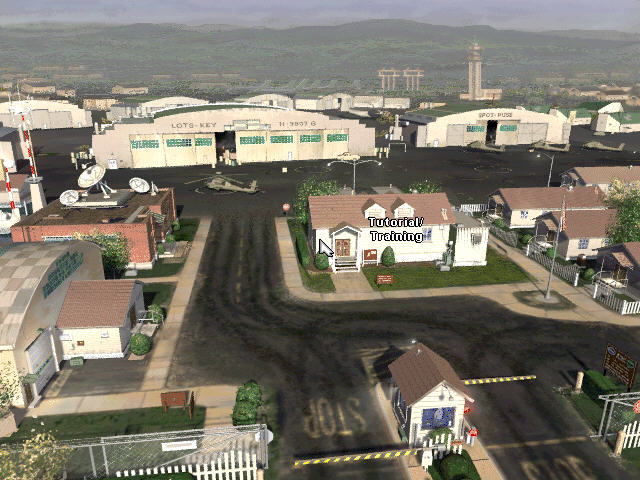 Right from the start of Longbow 2, anyone who played the first game should be immediately familiar with it. The base appears near enough identical to the original and serves as the main menu. There are the same options available from here for training, instant action, single missions and the campaign mode. For the purposes of “completing” this game I’ll be concentrating on playing through the 3 campaigns. 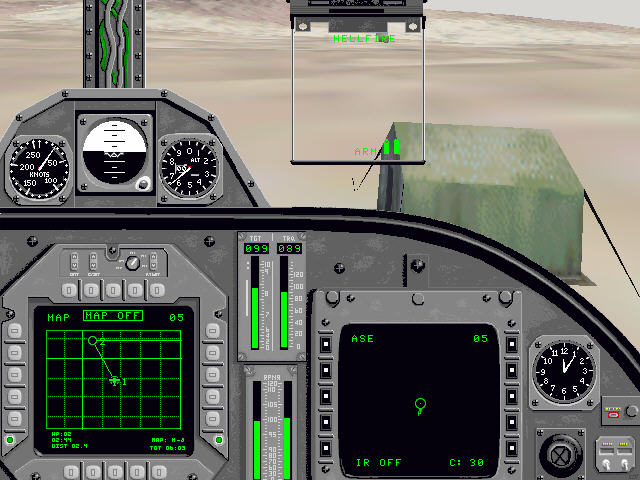 Before I do that, I have a go at the remaining training missions. First off I try out the second new helicopter which is the Kiowa. This is a reconnaissance helicopter but it does have a reasonable amount of firepower being able to carry a couple of missiles + rockets. While on the mission, I take the opportunity to fly in close to a building to have a look at the graphics. The detail on the tent here isn’t too bad even this close up but the ground textures feel extremely blurred. I suppose this game probably ran on a first generation 3dfx so it’s perhaps unfair to be too critical but I’m not sure the ground doesn’t look worse than in Longbow 1. I know other people have praised the graphics in the game so I perhaps needed to play it at the time to appreciate it. I can’t help but feel that I’d rather have less object detail and more on the ground since you never really get too close to anything if you are flying properly. 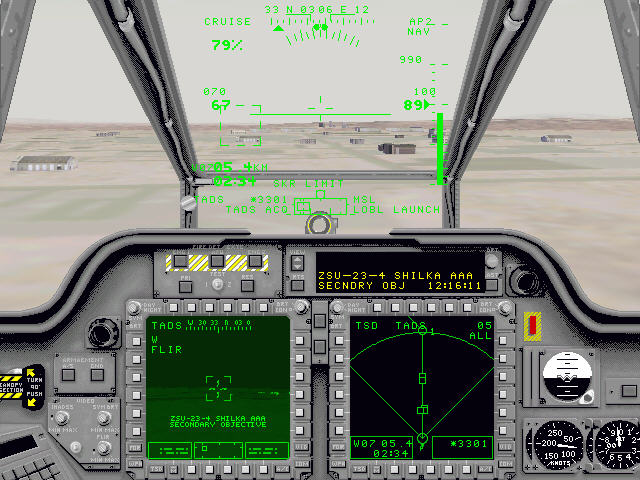 I then move onto the Longbow training. I struggle no end to get into a hover in this, not being helped by my forgetting to calibrate my joystick before I start. You forget about having to do this every time after getting used to using modern joysticks for a while. Flying the helicopter itself is much the same but the systems are extremely complex. The instructor takes over flight and then precedes to talk at me for 15 minutes non stop explaining the systems with so many acronyms my mind switches off after the first few minutes. I do gather that this is a brief introduction and he will be going into the weapons systems in “excruciating detail” in the next lesson. Suffice to say, I skip the next lesson for the moment when the torment finally ends.

The town we fly over in the mission is about as detailed as the scenery gets. The buildings look ok but the ground is flat and blurred and I don’t get a feeling of realism from it. The helicopter itself handles as I would imagine a helicopter should but the ground only starts to look any good if you put on some height, and that is something you will never do when flying combat missions. 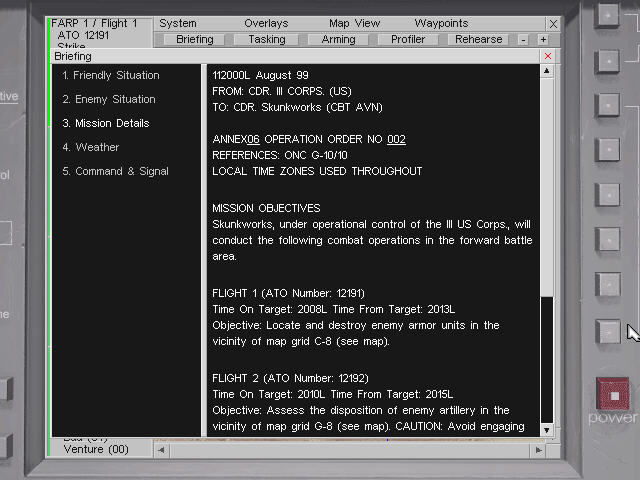 With the training mission complete, I head back to the campaign I started the other night. The scenario is something to do with us repelling a hostile invasion of a fictional country. There doesn’t appear to be any attempt at story here and there are no cutscenes or anything to introduce the campaign. The three campaigns, no doubt take place on different landscapes but the main difference appears to be the hardware you are facing. In this first campaign we are up against US technology. 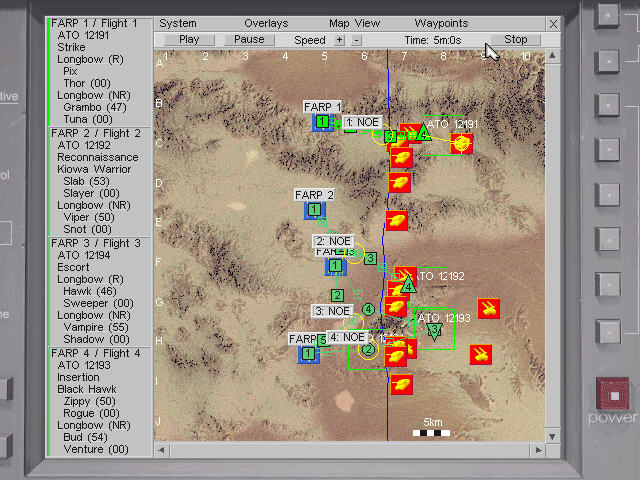 There are a load of options from this campaign screen, and I gather I could change the mission around if I felt inclined to do so. While I’m out on my mission, other wings are also going after their objectives so there is a whole battefield represented in the game. This battlefield changes for the next mission depending on what you do and how the other wings get on and the campaign will therefore be different every time. 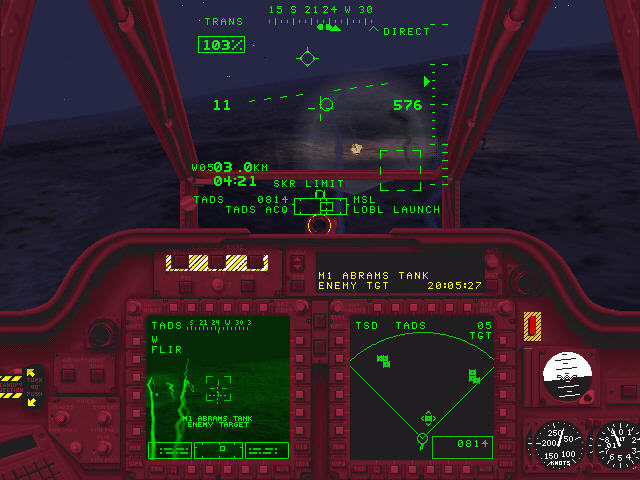 This is my first night mission, flying a Longbow. For the sake of getting a couple of decent screenshots, I’m up at height and the light effects and ground look excellent from this position. I can’t help but feel that this engine would be much better suited to a jet simulator where I’m further off the ground. There is a definite beauty in watching my missiles light up the landscape from a distance 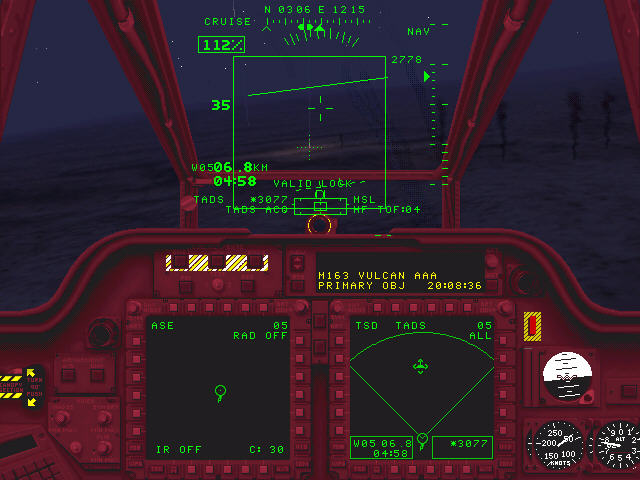 There is a satisfying plume of smoke left from destroyed targets. Destroying the targets is extremely simple in easy mode and can be done at some distance with little risk. The main issue is avoiding SAM’s on the way to the target. Ignoring the waypoints and flying around the edge of the battlefield seems to be the best approach. The flight dynamics are definitely different to those I trained with and are fairly laughable in this mode. No matter how steeply I bank and turn, my height is fixed unless I change collective and it certainly takes all the skill out of piloting the helicopter. The alternative if training was anything to go by is constantly adjusting collective in a useless attempt to maintain the same height. You really need a throttle control if you are going to play it this way as the + and – keys just aren’t sufficient.

There is an awful lot of speech in this game while you are in the air and I’m constantly hearing what the other teams are up to or where my co-pilot has spotted targets. This is all extremely well done and sounds very natural, especially after my recent playthrough of Super Wing Commander. The game certainly can generate a good atmosphere and I can see why it is so popular with flight sim fans.

I play a few missions through. They are mainly to go out and destroy some targets, although the briefing for my final mission is to escort ground forces which sounds a little more interesting. I’ll be playing that one next and will attempt to carry on and play through each of the campaigns today if time allows. I’ve no idea what to expect from each campaign but I’m assuming they will be fairly brief given that with the difficulty options I’ve set, my side has the advantage.

I get the distinct feeling that I’ve seen more or less everything this game has to offer already. I may struggle to find much else to say about it in the next post if this is the case, but I still haven’t used the games second CD so there must at least be some different landscapes to fly around. I would very much have liked a story driven campaign but I can see why they would go for this dynamic mode instead and it would certainly give the game longevity. From my point of view, I’m not really after longevity and am playing this purely because after playing 60+ Origin games, I’m not going to skip the last 2. Playing this in easy mode, I’m certainly not going to be able to offer anything in the way of a serious review. I’ve seen this described as the best helicopter sim ever made on numerous occasions, and other than graphically I can’t think what else there would be to improve on from what I’ve seen. I’m clearly not the target audience but I’m still enjoying playing this as more of an arcade game. If you like your sims, I don’t think you could go wrong trying this if it wasn’t so ludicrously difficult to get running on anything other than it’s target hardware and operating system.