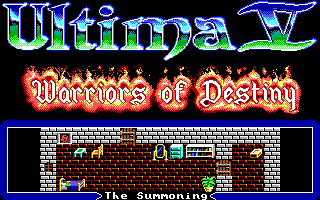 I got about 30 minutes in last night. I really didn’t manage too much. I watched the intro, this is entirely unanimated but the text is nicely written. It tells of you being called back to Britannia by Shamino. This immediately gets the attention of the shadowlords who shoot him with a magic arrow. You ward them off with your ankh and then carry Shamino back to Iolo’s hut nearby. Iolo tells you of Lord British’s disappearance and how Blackthorn has made all your old companions outlaws so you have to set out to try to restore LB to the throne. 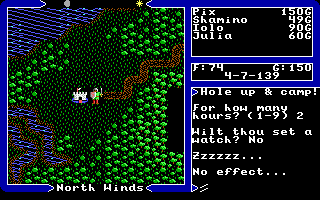 The game itself looks a little nicer than Ultima 4 but really not that much different. There are a lot more tile graphics but they don’t look much better. There are more sound effects but they are also of similar quality so far.

I’ve only got into one fight with some rats. The most obvious different is that I can finally attack diagonally. When you attack there is a little cursor to move round to choose where to attack. Presumably this means that range weapons can now be fired anywhere as opposed to having to line up with the foe but I can’t honestly remember its been that long since I played this. 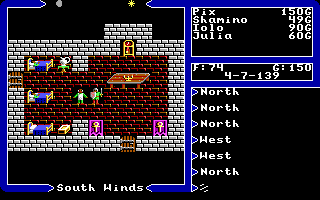 I wandered over to Empath abbey near by and talked to everyone there. The conversations are massively more detailed and much better written. Its a huge improvement. People also have schedules and walk around. I don’t know if I like this or not, its more realistic certainly but makes exploring harder and its easier to miss clues. I don’t think its a big problem and I probably talked to everyone. There weren’t any major clues to be gained other than a hint to ask a demon in the desert about one of the shadowlords.

I’ve been pinching things at every possible opportunity. You can steal all the torches off the walls, which should save me a bit of cash later on. I’ve also found food and such in barrels. I’ve always had to push the barrels around to get to the one in a corner to actually get the food. This is new to Ultima 5 but I could push things around in 2400 AD also.

Julia joined my party at Empath abbey making 4 of us. The party size is down to 6 which is an improvment in my opinion. 8 was just too many people to control at the same time.

Thats as far as I’ve got so far. The changes do make the world come alive more than Ultima 4. I’m far more optimistic that I’m going to enjoy this now that I’ve started it but its a bit early to say.