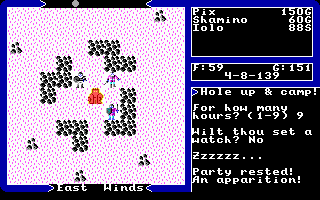 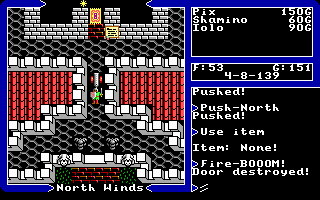 I finally got around to a bit more Ultima 5 last night. I started again from Empath Abbey and headed for castle Britannia. I continued my policy of nicking a torch every time I go past, this has no effect on my karma. There aren’t a huge number of people to talk to here – I do remember how to get the magic carpet and sandlewood box though from LB’s room at the top of the castle. I headed up there, waited for the guard to leave, pushed a cannon to the door and blasted it open. The magic carpet is just lying on the floor, I’ve not had any hints but I remember its magic from playing the game last time. 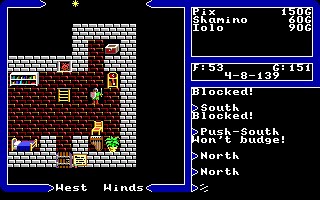 I can get the sandlewood box while I’m here. I have actually already received hints on this one in Empath Abbey. I have to play stones on the harpsichord (the score is in the manual) and a secret door pops open and I get the box. I went up the ladder here to the roof, when I get back down the door has reappeared and I’m stuck in. I ended up burning myself to death in the fire as my only route out. 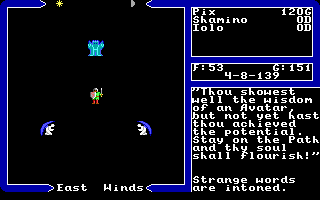 Next I headed for Britain. I bought slings for the whole party and found Gwenno in Yew. A farmer called Terrance gave me the info on the Resistance and sent me off to Yew to find its leader. Once I get to Yew I talk to the guy in the smithy and he tells me the password and location for the resistance (through his fireplace). Once I get downstairs, I find Jaana again and she joins up + talk to the leader of the resistance Landon. From elsewhere in the town, I get the password for my first dungeon. I also visit the shrine while I’m here and get a shrine quest. This involves going to a shrine, meditating then going off to codex at the abyss entrance then coming all the way back again. You can only do one quest at a time also. 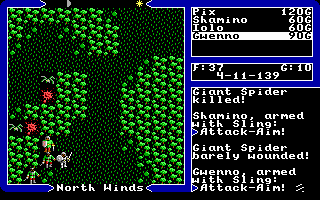 My plan now is to head of to Minoc, I remember that I can get skull keys (5 at a time) from one of the trees there which you can use to open certain locked doors. The idea is to get a load of these, then head back for Castle Britannia and steal over and over again from the treasury. This will ruin my karma but it should also set me up with decent equipment and my karma will recover over time. 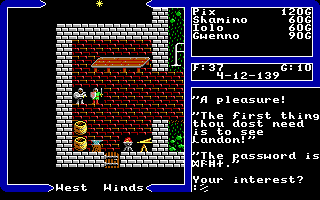 The combat in the game so far is really unforgiving. I’ve died a few times already and this knocks experience off your characters. I’ve now got half the experience I started with and am back to Level 4. As opposed to the 100 hp’s per level in Ultima 4, this time you get 30. This is near enough useless, I really need decent equipment if I’m going to survive so I think the stealing approach is the best bet. If I can get everyone decked out it decent armour with magic axes and all the reagents I need I may have a chance of actually getting somewhere. I just need to make it to Minoc and back alive first which isn’t proving easy so far. I remember now why I cheated last time – I wish I was playing Lazarus here if I’m honest but it wasn’t made by Origin so I’ve got to stick with this. 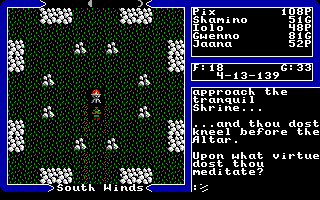