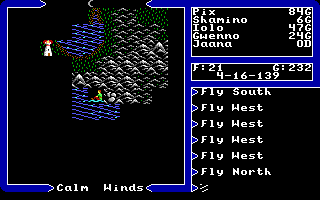 I got my first real session in on U5 last night – around 3-4 hours. I stuck to the plan and flew the magic carpet up to Minoc. I don’t know if its just me but the magic carpet seems completely out of place in a fantasy game. Anyway, at Minoc the beggar gave me the hint for the skull keys (which I already know are hidden in a tree at the top left). 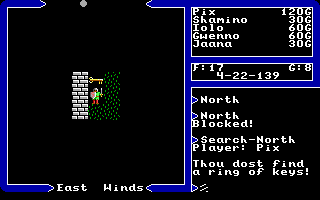 Every day one of the shopkeepers hides 5 of them up there, so I just borrowed a bed in one of the shops, slept for a day got some more and repeated until I had 55. I figured this was enough. 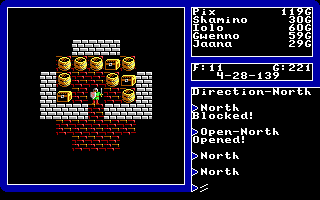 Back at Castle Britannia, the treasury is in the basement at the bottom. It only has the three chests in but they are all packed full of stuff every time. What I get out of them is random, but they refill every time you climb out of the level and go back down. I repeated this 50 times – by this point I had about 5000 gold and about 10-20 of every piece of equipment in the game. This has got to be enough to get me through to the end of the game I hope – if I sell all the spare equipment off there must be 1000’s worth of stuff. 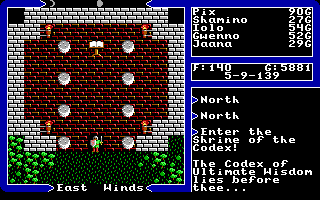 I armed all my party with magical axes and the best armor. You can use much more equipment in this game. I can equip rings, helmets, amulets, etc.. There are spiked helmets, shields and collars all of which give you an extra strike but this just slows down the battles as I’m trying to kill foes off at a distance. 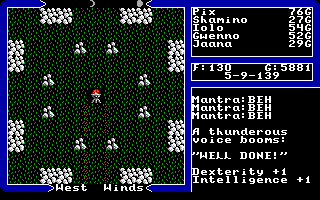 With all this gear the combat has certainly gotten easier anyway. I still wouldn’t say easy, and my parties stats aren’t going to change much in this game. This is about as easy as it will get, although I’ve not got round to looking into spells and reagents yet which should help. 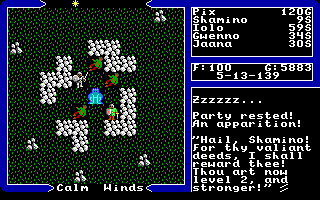 My karma was of course right down to 0 at this point. The penalties for this aren’t as severe as I expected. Lord British still appeared after we camped out for a night and raised my parties levels. He did mention my lack of virtue. 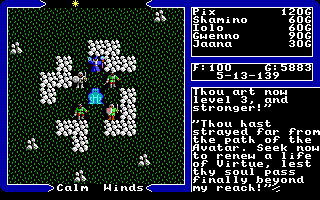 I’ve found a few ways of restoring karma. The shrine quests give me a bit each time + they raise my stats.  For this reason I decided to get all 8 of these out of the way before I go any further. If I try to explore more towns, certain people may not talk to me until I’ve reformed my character. 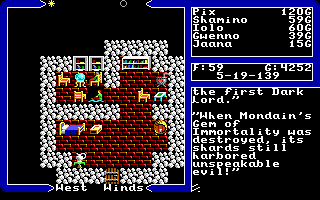 I bought a ship and a skiff in East Brittany. Skiffs are little rowboats new to Ultima 5 which you can use to sail up rivers. They can be stored on your frigate, so they basically mean you can land anywhere using a combination of the two. Every time I get to the codex on one of my quests, I get a trite little phrase about the merits of a virtue, then have to sail back to the shrine to get my stats bonus. This isn’t the most fun of quests but its easy enough and I got 5 done last night. Once the shrine is restored, I can also go back into it pray again and donate gold. Every 100, I donate raises my karma by 1 (starting karma is 75). I don’t think I need to donate too much so I only did this a couple of times. My karma is now back in the high 30’s and should be about 50 after the 3 shrine quests. (Ctrl-K shows your karma on PC version).

I still wouldn’t say that I’m especially enjoying the game. Its got better since I got the equipment, but I still think its far too difficult. Its an improvement on Ultima 4 in almost every aspect but its just less fun to play so far which is the only thing that really matters in a game.