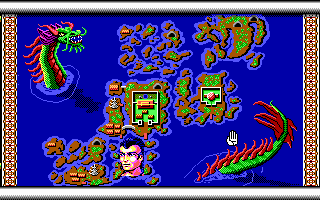 I went back for another go on Windwalker last night and as soon as I loaded it up, my savegame was gone and I was right back at the beginning of the game. I’ve no idea what this was about, but I started over again and it didn’t take too long to get to the same spot again. 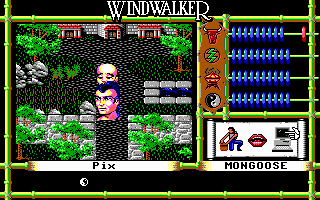 The next stop was to go to train at a monastery to become a monk – this gets me a robe and staff. If the training is anything to go by the staff makes the combat a lot easier as I can hit people while they are out of range. To get to this monastery I had to beat two assassins guarding the entrance however. This took a ludicrous number of attempts. I’ve resorted to some minor cheating at this point – I don’t have any details for savegame editing but I used cheat engine to hack my karma so I can put it back up to 10 whenever I like. I presume it will get better when I level up but the combat is a joke. I die in a couple of hits and I’m having to hit these guys about 15-20 times. I didn’t want to cheat in another game but this is pretty minor so it doesn’t worry me too much – this will be the last game I cheat in, honest.

Eventually I get past these assassins and into the monastery. This has a load of silent monks walking around who won’t speak to me + one older monk. Before I talk to him I head to the top floor and read all the scrolls in the library. 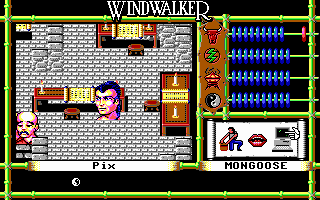 Theres all sorts of background information up here, quite a bit of it will blatantly be useful later in the game like a Nubian language phrasebook. 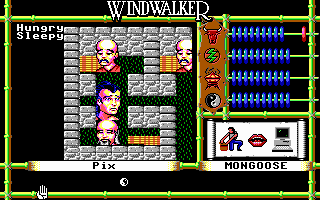 When I talk to the old monk he says I can join their order if I follow the routine for a whole day. 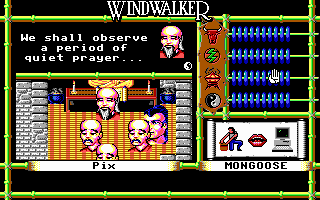 Following this routine consists of running around after the old guy for the whole day, meditating and the like. These monks have a lifestyle about as interesting as Windwalker itself. Anyway, I follow them round all day and the next morning, I’ve passed the test and now have to fight my self to conquer my inner demons. 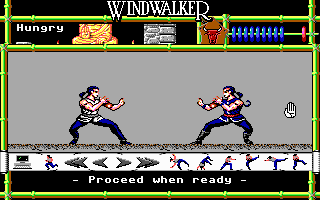 This turns out to be the single easiest fight I’ve had which shouldn’t surprise me given that everyone else can beat me up just as easily. 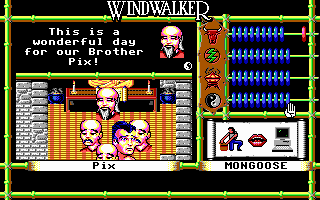 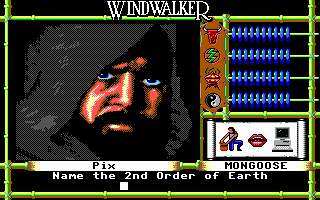 Aside from getting the robe and staff, Moebius also pops up to finally raise me a level. There seems to be a minor copy protection thing going on here where he asks me the name of the order I’m about to join. These are all printed out in the manual. I’m now a member of the order of the badger which probably isn’t something to admit to in public. 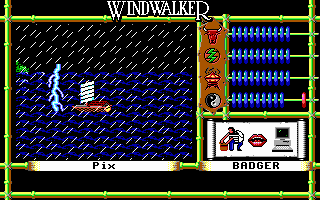 I’m going to need some striped sea turtle shells for the next section of the game, which I can buy from the fisherman in the first village. I wait for the morning and follow him when he sails out until hes caught some shells and buy 4 of them off him.

There is a shaman in the isles of the dead right at the top of the map who can use a shell and 4 particular items to create 4 talismans. These mean I can cast spells in effect so the next stage is to get these four talismans.

The Isles of the Dead are surrounded by storms. These are another test of my patience. What happens is everything is frozen while its raining and thunderbolts randomly appear on the screen one at a time along with a digitised sound. If one hits you and they invariably do you lose a load of health. Sitting through one of these storms takes about 30 seconds, and I’d swear that sailing around the islands you barely get any distance before you run into another.

I have a huge supply of blessed incense to heal up after these, but even that takes a while. You have to watch your health tick back one at a time while the incense burns along the bottom of the screen. Just starting the game up takes ages – every stat on the right of the screen ticks on one at a time for no reason whatsoever other than to wind me up. 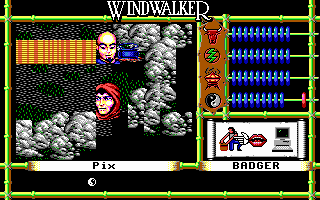 I find the cave pretty easily and get two of the talismans made with the heron feathers and the blind mans shoe. The next chore is to seek out a water beetle, sneak up on it with my newly acquired invisibility spell and get one of its mandibles.

Sailing around these islands with the constant storms looking for one of these things takes quite a bit of time. Eventually I do actually find one, cast my invisibility and steal its mandible. Its then back to the shamans again, and he makes me the water walk talisman.

The next talisman involves using both invisibility and water walk to sneak up on a water dragon but that can wait for tomorrow. I did see one of these while I was looking for the beetle so I know where to look at least. This will net me an invincibility talisman at which point the walkthrough says the game is pretty much over as the spell lasts a long time and you can use it to gain enough money that the incense to raise your spirit back up is not a problem.