I’ve made a start on Windwalker. I can’t say I’m too taken with it – the game plays like a slightly updated version of Moebius. The updates are pretty minimal really and its hard to see all that much difference. The adlib support is also  minimal although there are also digitised sounds used in the game which is a first for Origin. Music is limited so far to the introduction + a short tune at the end of combat. Digital samples aren’t used all that much but you get grunts when you hit people.

Speaking of the combat, this has got a lot harder this time around. One of the blessings of the first game was that the combat part was dead easy so it didn’t slow me down much. Things are a lot harder here – to add insult to injury the game effectively uses a lives system where you lose 1/10th karma if you die. Lose it all and thats the end of your game and you have to start from scratch. If you decide to restart the game after a battle you lost to get around this, you automatically lose karma anyway as there is some checking mechanism involved when the game reloads. I’ve had to restart once already because of this but will be more careful from here on out – basically it comes down to accepting that the thief has just stolen all your money if you lose a battle, or attempting to escape from prison if a guard beats you.

Movement is once again fairly painfully slow, but I get the impression the games world is going to be a bit smaller this time. I haven’t got the patience to do anything other than follow a walkthrough to the end with this game anyway and that walkthrough looks promisingly short. I’m glad to say, this is the only game left in the entire catalogue that I don’t actually want to play through so after this it should be good all the way. I must have played 90%+ of the remaining Origin titles at least at some point even if I haven’t finished them and I can’t think of a bad one in there. Particular highlights on the way for me include Martian Dreams, the two Underworlds, the two Crusader games, Bioforge and pretty much the whole Wing Commander series. The prospect of playing some of them is keeping me going through the likes of this. 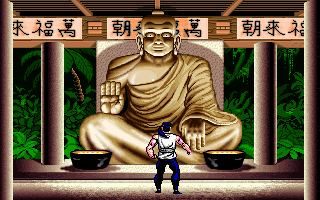 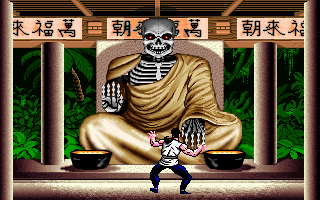 To get back to Windwalker, the game starts with quite a nice intro, where you are practicing some moves and some shadowy figure transforms your giant statue into a skeleton. The VGA graphics here are not bad at all and a big step up from anything I’ve seen yet. The intro doesn’t give you any of the backstory, which to be brief is along the lines of evil warlord deposes the emperor and you have to put him back again. 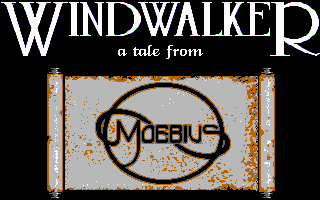 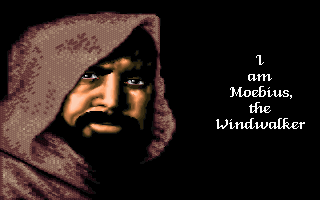 Moebius appears and gives me the option of training or venturing forth. I have a go at some training. There are two gameplay modes for the combat here, one of which is like your typical kung fu game, the other has the opponent unable to move until you do, so is turn based. There seem to be more varied options in the combat than the last game but there aren’t any more of them. I can do stuff like a cartwheel which kicks my opponent at the end. The animation is really basic though – the cartwheel move uses about 3 frames of animation so its not exactly smooth. Combat comes down to choosing the right move for the distance you are from your opponent as far as I can tell. 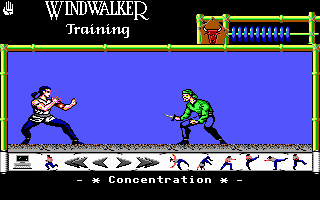 In all honesty, I’ve never been that keen on martial arts games. I’ve had some fun on the likes of Street Fighter, One Must Fall and Mortal Kombat over the years but probably spent more time just trying out moves I got off the internet than anything else. This is obviously trying to be more tactical than those but its less fun. I would rather play Ye Ar Kung Fu in fact if anyone remembers that one. 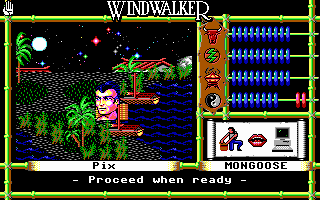 I get bored with the training pretty rapidly and venture forth into the world. This uses a really strange perspective. Moebius, used an isometric display long before any of Origins other games. This takes it a bit further and does a 3D sort of effect which is very hard to describe. Basically things on the top of the map appear from the top up so you might see the top of a tree before the bottom of that tile is really visible. To make things odder still the background represents the time of day and sort of scrolls along as a 2D graphic so you get sunsets, etc.. To finish off the oddness you still have the giant heads representing characters. Why go to the length of making a pseudo 3D world in an attempt for some realism then have giant disembodied heads wandering around it to ruin the effect? 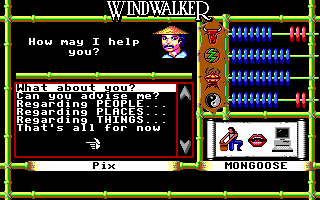 The characters in the game have a bit more to say this time around. There isnt a keyword system, the game just remembers what you have learned and you select it off a list. This all works well and is probably the best developed system in any of the games I’ve played so far. 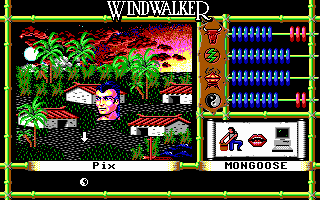 You start the game on a tiny little island with a few houses, 1 shop and one temple. I buy a load of incense in the shop. 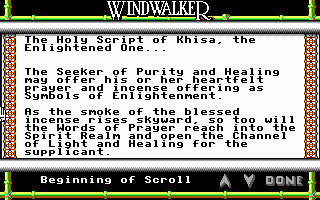 In the temple is a scroll with instructions on how to use the incense. Basically get it blessed by a monk and you can use it to heal, or regain honor, etc.. 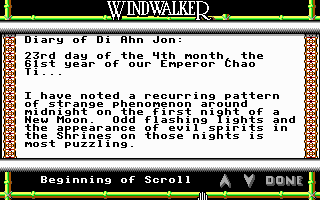 I quickly run out of things to do, so get a boat and sail off. One of the islands has a house on it with the above scroll and a map of the world. The scroll gives me a clue about an invisibility talisman I can make with a turtle shell and a blind mans shoe. As luck would have it there is a blind man outside the merchants shop. 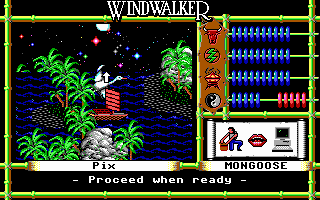 On the way back, I see a heron flying around. If I wait for it to land I can steal some feathers which I know the merchant will buy so I steal these repeatedly. 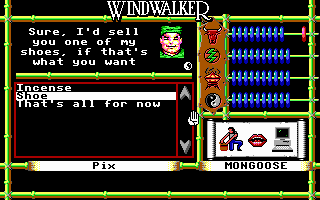 The merchant buys my feathers so I’m now rich (ish). While I’m here I buy the blind beggars shoe.