I’ve got started on Ultima 6 with about a 3 hour session. It’s a huge change from Ultima 5, where combat was all important. This game almost belongs in a different genre. So far, I’ve been spending all my time exploring the towns and talking to everyone in them. The conversation trees are just huge now for every single character, everyone has a portrait and a different personality and it feels more like a real world than ever before. Having said that a lot of the towns only consist of a few buildings which is a little unrealistic, but its difficult keeping track of everything as it is so I shouldn’t complain. 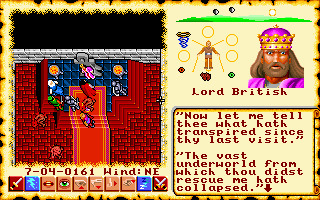 I started out with a chat to LB who reiterates my quest to solve the gargoyle problem. 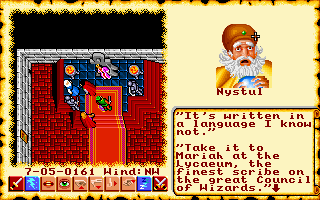 It seems that Iolo grabbed a tablet with writing on it while I was being rescued. Nystul the royal wizard advises we take this to Mariah at the Lycaeum. I never got around to this since I only even just remembered the quest while writing this. I really should be taking notes while I play this game. Anyway, he also advises me about the black stone I picked up on earth and LB gives me the full details on it. Basically, if I use the stone on a tile surrounding myself a moongate appears, which tile changes the location I get teleported to. This is incredibly useful and can be used to speed around all the games locations. 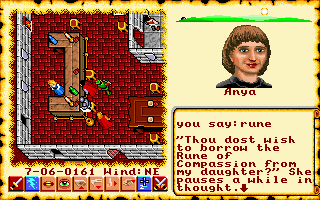 I set out to free all the shrines – I figure I will need the runes to do this and ask around in Britain. Arianna, a young bard, has been awarded the rune. I ask her parents if I can borrow it and they give me the ok. 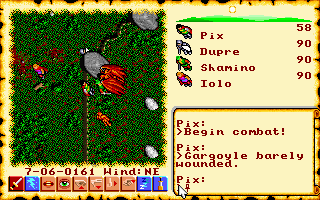 A quick walk to the shrine of compassion, and I’m set upon by gargoyles. Thankfully there are only 3 so we just about survive. I use the rune, say the mantra and the shrine is freed. I (or any of my party) can talk to the shrine if I want to level up at this point. 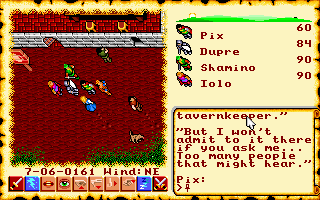 When I head back to Britain, I run into a travelling band of gypsies. I remember from years back that they were important for some reason but I’ve no idea what it was now. No doubt I will find out later. 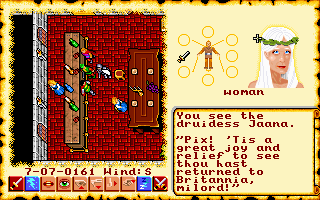 Freeing the rest of the shrines follows a pattern of sorts. I have to ask the towns leader about the rune and they will give point me in the right direction. I already know the mantras so I’m not worrying about them. I head for Yew next and run into one of my old companions Jaana, who joins up. 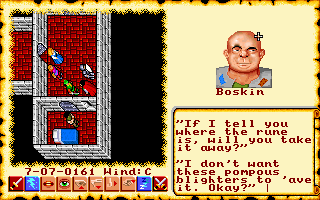 It turns out the rune was stolen by Boskin, who has been caught but the rune is still lost. He agrees to tell me where it is as long as I take it away which sounds ok to me. 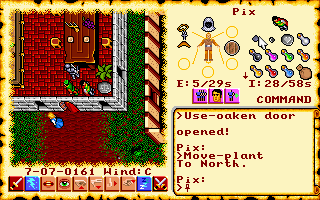 The rune is under a plant in the pub – easy when you know where to look. 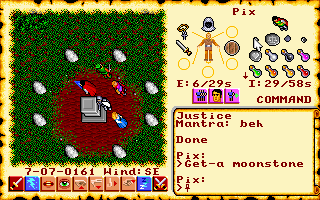 I try walking to the shrine but get massacred every time by the gargoyles. If I use the moonstone to warp there however, I seem to be safe + it drops be right on the shrine so I can just cleanse it and warp out again. I stick with this strategy for the rest of this day. 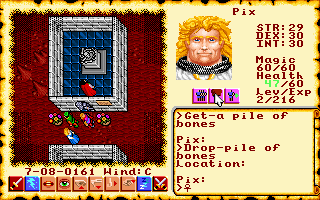 The next rune turns out to have disappeared along with its owner. I eventually find out that he dies and is buried in a crypt under the pub. 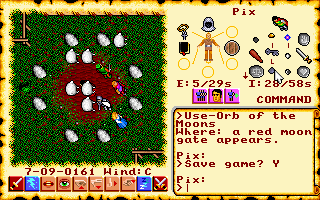 New Magincia next. I teleport into the middle of a flock of sheep. 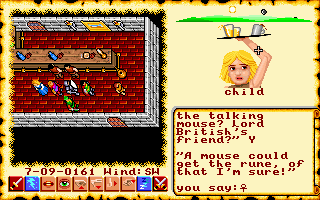 The rune here was stolen by a rat and dragged into a hole in the wall. I’m given the solution to retrieving it by a child working in the bar. Back at LB’s castle Sherry the mouse joins my party after I give her some cheese and she is able to go into the hole in the wall and retrieve the rune. 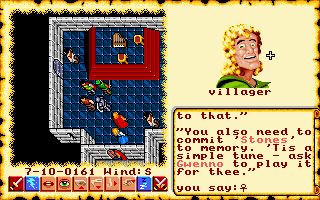 In Trinsic, I have to join the guild to be allowed to borrow the rune. This means I have to make some panpipes and learn stones. Gwenno has already joined my party so learning stones is easy enough. Panpipes require a freshly cut board of Yew, so I have to warp to Yew, buy a log, warp back, get it cut and the sawmill, then Jaana turns it into pipes. 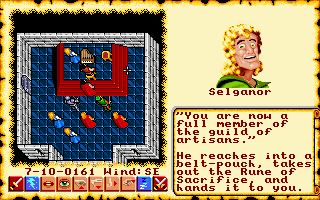 The town mayor now gives me the rune. 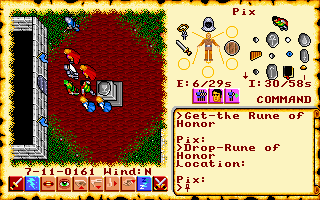 The rune of honor is the easiest of the lot. Its left in the middle of the town as no one would be dishonarable enough to steal it….

At this point, I’ve retrieved all the runes and freed all the shrines and am at a slight loss as to what to do next. I decide to use the moonstone to warp down to the gargoyle side of the world. 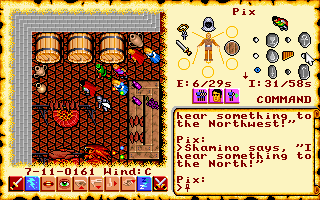 The gargoyles don’t attack on sight for the most part but I can’t understand a word they say. 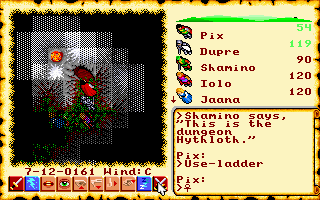 I remember from last time I played this that Captain Johne is just inside the entrance to Hythloth. The entrance takes a bit of finding but I get there in the end. 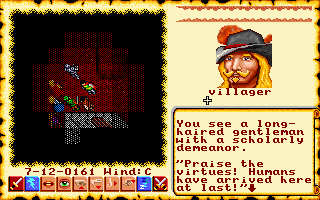 He fills me in on a lot of the story for the game. 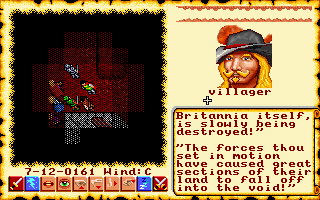 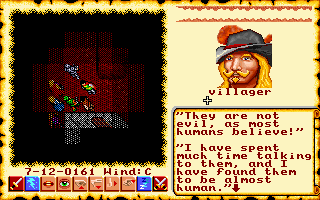 It turns out the gargoyles aren’t evil after all, but are just trying to save their world from destruction. Apparently moving the codex after Ultima 4 is destroying their world. This is a great plot twist (if I didn’t already know about it). 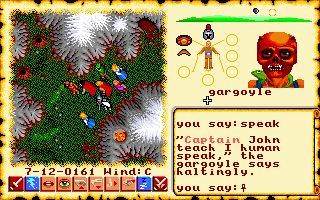 John sends me to meet up with Beh Lem (a friendly gargoyle) who has been helping him with their language. He also gives me a scroll which I use to learn the langauge myself.  Beh Lem tells me that the world can only be saved through my sacrifice which the gargoyles have taken literally but could mean several things. 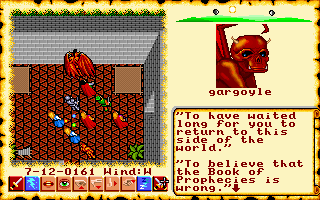 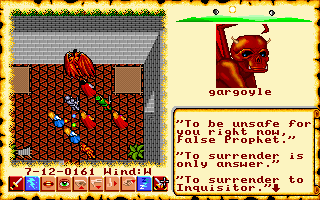 He points me in the direction of another gargoyle who says I must surrender to the gargoyle inquisitor. 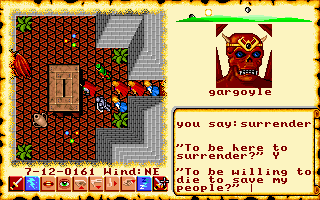 I do this and he places an amulet on my neck which will apparently hold me to my promise to come back and be sacrficed when the moons are aligned. Lets hope this isn’t too soon. All the gargoyles will talk to me now.

I’ve had hints about other quests such as retrieving a gargoyle cube from Stonegate which was apparently stolen by human thieves. I’ll attempt that and head for the Lycaeum next.

As ever, I’ve really rushed through this post. There is far too much happens in a session of play on this game for me to attempt to get it all in. I must have talked to about 70 or 80 NPC’s all of which had loads to say.  I’m kind of overwhelmed by how much conversation, I’ve had to remember. I really should have been taking notes. Having done all 8 major towns now, its probably a bit late to start but I’ll correct that when I make it to Ultima 7.

This doesn’t feel anything like Ultima 5 to me at all – the series really took a new direction here. I like the single scale map so you just walk out of one place straight into another. I kind of miss the 3D dungeons but in all honesty they were getting less important each game as the pre-designed rooms took over. Ultima Underworld more than made up for the lack of dungeons anyway. I’ve hardly been involved in combat since I started, just a few wild animals here and there. This is fine by me and the gameplay here is more about puzzle solving and exploring.

As much as I like the early games, I think all the changes are for the better. You can’t keep doing the same thing over and over. I think being a fan of the whole series, requires you to like quite a few genres and opinion differs wildly with different people loving or hating different parts of the series. So far I’ve enjoyed them all so hopefully that will continue – I’ve never played 7, SI or 8 though so I’ll hold out judgement for now.