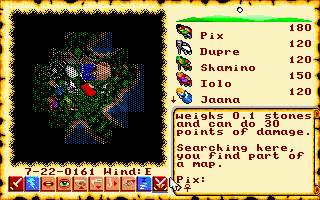 The next map piece was lost on a shipwreck. Thats not much to go on but I do remember talking to someone who mentioned a shipwreck around the cape of heroes. Surprisingly, I don’t have to look around for long to find a wrecked ship guarded by a load of skeletons. I search the ship and its another piece found. 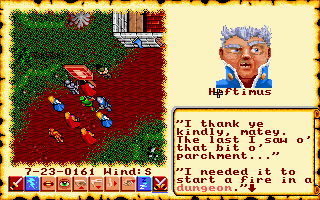 The next clue is a guy in Jhelom with a hook. He tells me he was using the map to start a fire in the dungeon Wrong. I trek up to Wrong but I can’t get through any of the doors without an Unlock Magic spell. I’ve not bought any reagents or spells at any point yet so I guess I’d better start. 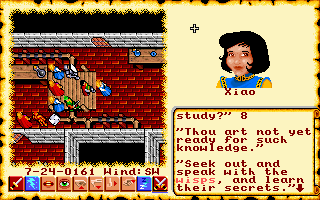 The first shop I go to doesn’t sell that spell I need – I get a few others while I’m there + reagents. I’m not allowed to buy level 8 spells without talking to the wisps apparently. 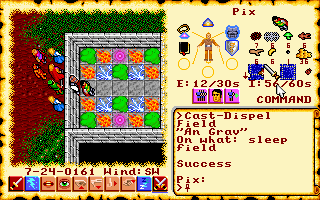 Back in Moonglow I use my newly bought dispel field spell to get through a seriously well guarded room. 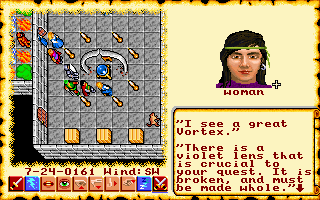 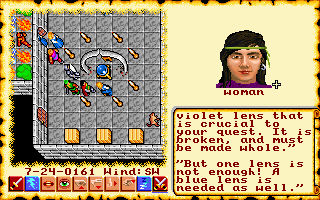 Inside, Penumbra gives me a minor clue about needing two lenses but not much else. 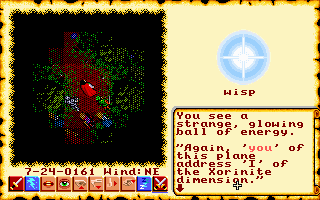 I wander around looking for places to buy spells and run into some wisps. They give me an armageddon spell which will destroy all life. Not much use but I guess I can buy level 8 spells from Xiao now. 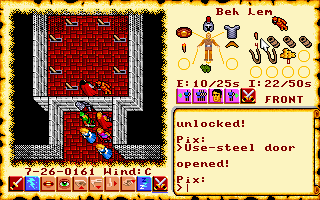 Eventually I find somewhere to sell me an unlock magic spell and head back for Wrong. I manage to get down a level but get stuck again. There is a room full of levers none of which seem to open the portculis I need to get through. I can see another lever behind another closed portculis but can’t get to it. 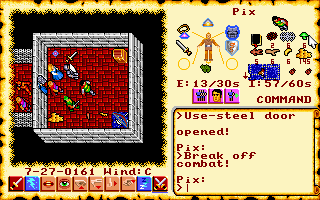 Another couple of long walks later, and I’m back with my new Telekinesis spell. I make my way down to the bottom level, fight past a hydra, and find the map hidden behind a secret door.

It doesn’t look like much progress but I must have spent about 2 hours on this session. How all these map pieces ended up at the bottom of every dungeon, I will never know but its keeping me entertained at any rate. I had this notion that Ultima 6 would be a lot smaller than 5 with the improved graphics but it doesn’t feel it – I hope the other half of this tablet proves useful if I ever find it.