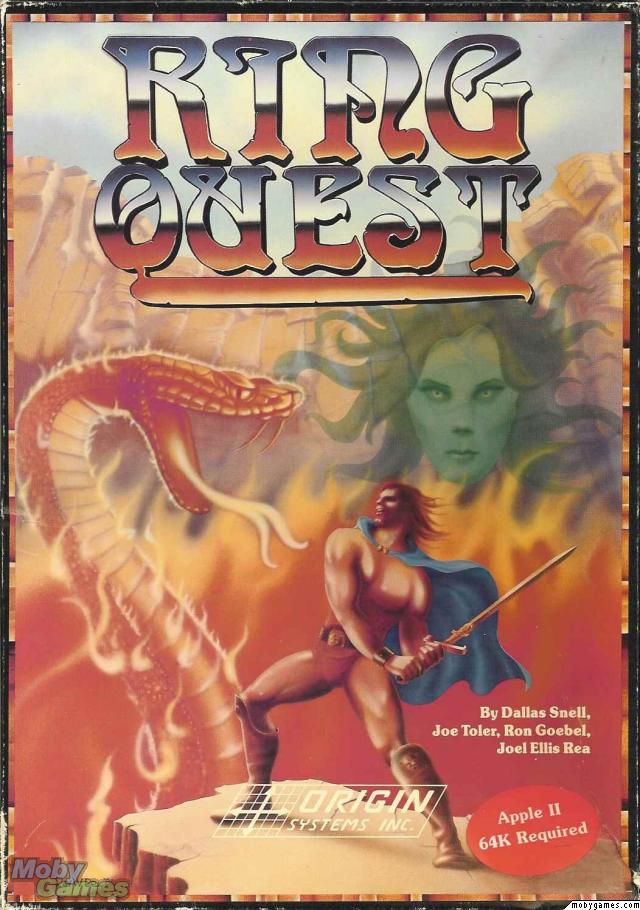 This is a game I know next to nothing about before I play it. It was originally published by PenguinSoft around 1983 and I think brought over to Origin by its main author Dallas Snell when he joined the company. The game itself is a text adventure with graphic screens for all the locations. Some of these screens are also animated.The plot is set by an illustrated game-book style manual that works just like the old fighting fantasy books I loved when I was a kid. All routes end at the same place but theres a dozen different ways of getting there. It doesn’t serve any purpose as such but its a good idea. Theres also a map, that basically has nothing on it and I’ve ignored since.

The plot in the manual is a bit tricky to summarise since there are loads of ways of getting there but basically goes as follows. You are on a beach and run into an old man who wants to tell you a story about the rings of power. There are two such rings, the ring of order and the ring of chaos. The ring of chaos has the power to change the world but the ring of order only has the power to control chaos, which is infact true power. At this point the story branches, but one way or another you wake up not on earth, retrieve the ring of order and then get transported away again to meet a wizard and warrior (Gorn) who give you the games actual plot. Lisa the enchantress (yes, really) has been possessed by the ring of chaos and you must go and save her with Gorn. The ring then teleports you both off and the game begins.

I do own the apple 2 version of this game but I’ve no way of getting the disk onto my pc to run in an emulator. I searched the web for a rom but the only versions I’ve found have a PenguinSoft brand in the intro – I’m thinking the intro will have been different in the Origin release but since this is all I’ve got, I’ll play this version. I think my patience for a 25 year old text adventure game, may be short so I’ll probably make liberal use of a walkthrough.

The game starts with an intro screen, which I guess looks better than anything in the Ultima games so far, then even though I’ve not done anything yet I have to swap disks to get into the game proper, which starts at an 8 way crossroads. The picture draws a polygon a a time and takes quite a while – I’m immediately put in mind of playing the hobbit on the spectrum although the graphics here are probably better. The speed they draw at is a bit frustating – by pressing enter again I can swap just to text mode or back again.

Theres a forest to the east so I head for that, the game pauses while it loads off the disk every time you move(I’m going to have to get used to waiting). I find a spring in the forest which on closer examination contains a dagger which I take as well as refilling my waterskin. Rather than a static screen the spring actually bubbles which is a nice touch. I carry on through the forest and eventually come across a boat with an ogress in front of it – rather than attacking us she hugs Gorn. I’ve no idea what this is about so head off again.

Suddenly I’m paid a visit by Lisa herself. Shes described in the text as a beautiful woman but looks more like David Dickinsons wife in lime green instead of mahogany. She casts a spell which takes all my water so I have to trek back to the spring to refill. She seems to keep paying me random visits throughout the game. Today  shes nicked my water, confused Gorn so we go in the wrong direction, and once stopped him being able to understand me. These effects (apart from the water) wear off after a while so its no great hardship.I found a man in a hut who offered to help me for cash – I give him 100 gold and he tells me my more about my quest. Lisa has used the chaos ring to create a forcefield around her fortess. This field has separate power sources which must be destroyed before I can gain access. He also gives me three funny words to remember.

I ran into a werewolf who Gorn finished off with the dagger, and also a timber wolf. By saying the three odd words to the timberwolf, he vanished and was replaced by a glowing orb, which is apparently one of the power sources. By touching it with my ring it stops glowing so thats one of them gone.

Elsewhere I find a very stoned looking troll. In the game his eyes flash which adds to the effect. He nicks my stuff if I go past him, but by dropping everything before I go past except my gold I can hold onto the important things and get them when I come back later. On the other side of his bridge is an ogre who looked like he was going to attack me then apparently smelled Gorn and followed us instead. Gorns body odour obviously has some sort of effect on ogres. I take the ogre back to the ogress, they both disappear off together and the way is cleared for me to get into the boat. In here I picked up a rope and a ruby, then headed back to the cross roads. I’ve still not tried out half the directions from here so will explore more tommorow.

I’m not sure what I think of this game so far – with a couple of exceptions text adventures were never really my thing – I was more into the Sierra games and the like. The speed of the graphics are quite frustrating here and I’m tending to stick to text mode if I’ve seen somewhere once. There haven’t really been many puzzles yet, and if theres only 100 locations I must have seen at least 1/3 of the game. The box does say something about arcade sequences but theres no sign of any.  As text adventures of the time that I remember go, its above average. Its definitely better than Zork (which I never liked) but not exactly up there with A Mind Forever Voyaging.