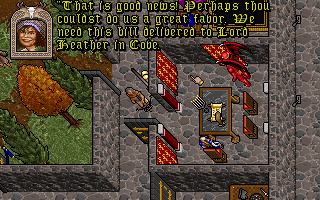 After finishing Forge Of Virtue its back to the main game again and exploring Britain. I pick up my first subquest straight away in LB’s castle. Miranda (a member of the council) is trying to pass a bill to unpolute Lock Lake which I need to take to the leader in Cove to get signed. 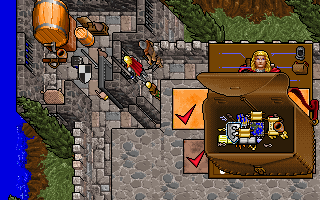 LB says he has some equipment for me somewhere in the castle but rather than tell me where it is says to think of finding it as a game. No problem, I think as the castle isn’t all that large. A lot of wondering around later I figure out there are rooms on the top floor in the corners and get my spellbook and a few other bits and pieces. 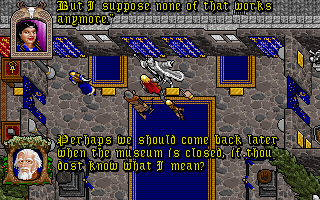 I’m well equipped now so I just want to wander round town talking to everyone I can find and see if I can find out anything about the Crown Jewel in the process. The first place of interest is the museum I pinched the lenses from for Forge Of Virtue. They have the coloured stones I used back in Ultima 4 as an exhibit which can be used to teleport around the kingdom. I’ve already got the moonstone so I don’t know how much I need them but Iolo suggests we come back and steal them when its shut so I do just that. They are technically mine anyway so its not stealing as such. 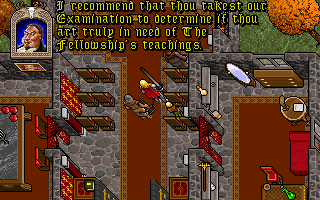 The head of the fellowship himself, Batlin is in Britain. I talk to him at length. He suggests I should take a test to see if I need to join the fellowship. 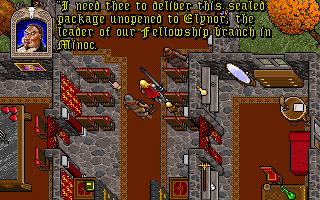 What follows is a series of 2 choice questions in which there is blatantly no right answer which he uses to show the flaws in my character and therefore the need for me to join the Fellowship. I’m really not sure I want to join anyway but he won’t let me before I deliver a parcel to Minoc and I still have to do some sort of test after that. I take his parcel for now. 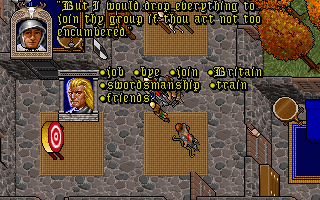 One of my old companions, Sentri is running a trainers. I ask him to join and get free training to raise Dexterity/Combat whenever I want it which can’t be bad. 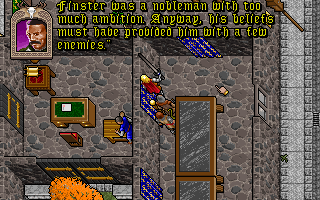 Patterson gives me some details on a near identical murder that happened in Britain some years back to a man called Finster. Finster was running for mayor as well as Patterson with an anti-fellowship policy and was mysteriously bumped off. Patterson was also struggling for votes before joining the fellowship. The motives look pretty obvious here but that doesn’t help me track down the offenders. Patterson claims that the fellowship has helped him be more honest but he is obviously cheating on his wife. Iolo suggests we follow him after the fellowship meeting to see what he gets up to. 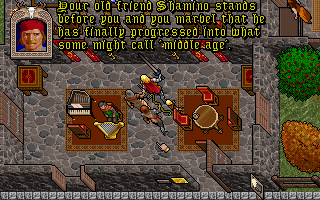 I find another of my old companions, Shamino hanging around in one of the bars. I get him to join up as well. I’m just missing Dupre out of my usual companions now and will have to fetch him from Jhelom sometime. 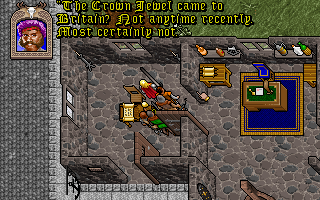 I find the port and ask about the Crown Jewel but it never came to Britain so that was a complete dead end. This doesn’t leave me with any leads to follow up but I would guess that if it didn’t go to Britain it would probably head for Bucaneers Den as the nearest port so I may try there if I run out of side quests. 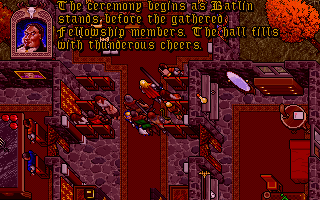 I explore everywhere else in Britain that I can find. The number of shops really is huge and I talk to a lot of people but don’t learn anything significant (at least I don’t think I do). I hang around outside the fellowship hall and wait for the meeting to start at 9pm. 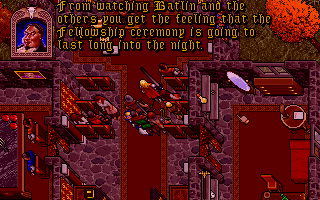 Batlin comes across like an american TV evangelist and I really don’t learn much. The people there have clearly profitted by being in the fellowship but not it would seem through self achievement and more through the society looking after its own. One of the people in town mentioned a fellowship retreat somewhere near Serpents Hold if I remember right where they train recruits. I definitely should pay that a visit at some point.

Right now I’m still trying to follow Patterson. The meeting goes on for hours but sometime after midnight I catch him in the company of Candice. 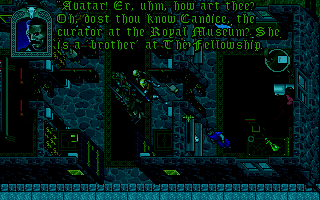 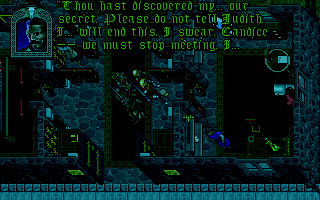 So much for the fellowship improving his honesty. He vows to reform which I don’t really believe but theres nothing else to do. I don’t gain anything as far as I can tell from this quest. 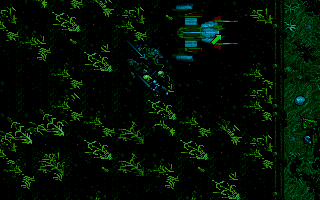 Just outside of Britain is a small farming community. I’ve heard from other people in town that the farmer is a little nuts which might have something to do with the Kilrathi ship parked in his field. 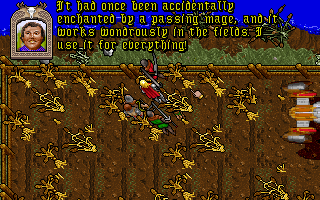 He gives me a long story about the Kilrathi crashing on his planet and being about to kill him when his hoe killed it. A mage mixed up his hoe with a sword and gave it the death enchantment and left the sword just able to cut weeds. Its locked in his shed. 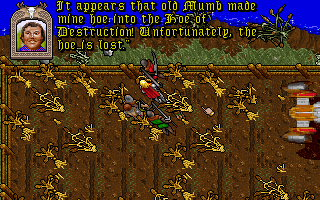 I can have the hoe but I need to find the key which he used for fishing at lock lake for a lure. This definitely sounds like something I want to get. 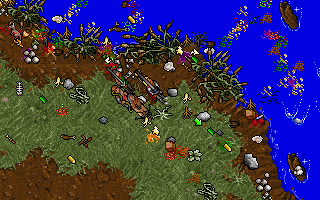 Lock Lake is truly a mess and quite large to go with it. I have a quick look around but don’t see a key. I’ll keep on searching next time I play. 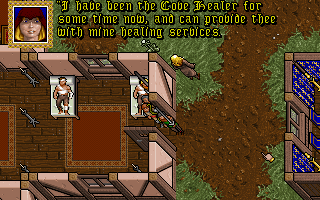 Cove is not much of a walk from Britain and I run into Jaana at the healers. She joins up – my party is getting fairly large now. 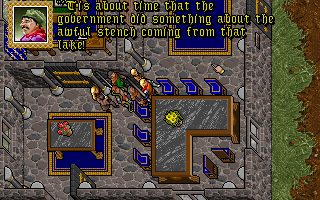 I get the signature of the town leader as requested by Miranda – I need to take this back now. He also tells me about a girl called Natassia who is the only person in Cove who hasn’t found love. I can see a side quest coming on here but I have to find her first. I gather she hangs out around the Shrine of Compassion. 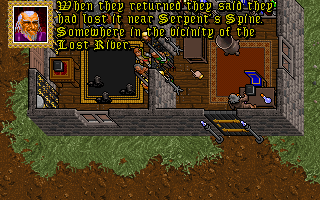 Rudyom the mage has a house in Cove. He puts me onto a magic carpet somewhere near the Serpents Spine. This was very very useful in Ultima 5 so I really should search this one out as soon as possible. He will sell me spells and reagents at the usual prices. He has a bit of info about blackrock which he was researching and also a wand which can cause it to blow up. This sounds potentially useful so I take the wand with me.

I’ve got a few vague ideas about where to go to try to solve the murder but nothing concrete so I’m going to concentrate on solving the definite quests which (for my benefit) are:-

Find the key and get hoe

I’ve talked to so many people that its hard to know what is relevant and what isn’t. The amount of conversation would appear to be enormous although looking at the map everywhere else is a lot smaller than Britain so it should get a bit simpler. In some ways this doesn’t feel like an RPG, I’m concentrating on talking to everyone to try to get clues and items. In other ways, however, its a pure RPG in that I can go wherever I like right from the start of the game and just explore the world. If its like the last few Ultimas all the combat will turn up later in the game I expect.

I can see why I struggled to get into the game all those years back as the freedom of choice is overwhelming and its hard to keep track of all the little quests and things people have said. Its hardly a fault but you just get used to being led around a game after a while and its disconcerting when that doesn’t happen.

I really don’t see any of that as a problem this time around and so far I’m glad to say Ultima 7 is living up to expectations, but I’ve barely scratched the surface and I don’t intend to rush.