The big announcement for Shroud of the Avatar in the last few days was that Tracy Hickman has been signed up as lead story designer. He doesn’t have much of a history in CRPG’s but did work at TSR for some time as well as writing numerous fantasy novels, most famously the Dragonlance series. I have to admit that the name didn’t mean anything to me and given that name I wouldn’t even have known that Tracy was a bloke without his photo accompanying the announcement. I thought I should put that right and fortunately have this:- 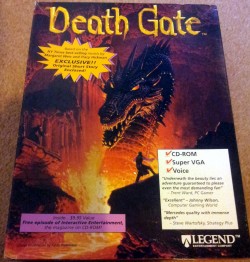 This was the second of only two games ever released to have Hickman in their credits with the first being an SSI RPG based on Dragonlance. This 1994 adventure game was released by Legend and based on the Death Gate series of novels written by Hickman together with Margaret Weis. Legend released several games based on novels during this period, some involving the authors more than others. I don’t think Hickman’s involvement in this project went much beyond providing the source material although he did contribute towards the documentation:- 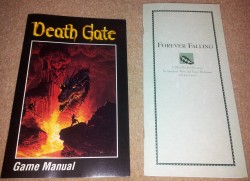 Given how ludicrously thick the box is you would expect more inside but there is only a CD + these two small manuals. The one on the right is an short story written for the game by both original authors. It tells some of the backstory of one of the characters from the novels. With no knowledge on the series whatsoever this starts me off at an immediate disadvantage but it’s still an entertaining little tale.

The main characters are a high born elf called Ciang and her “weesham” Kasia. The job of the weesham is to carry a box with them at all times in which to capture the sole of their noble elf master which can then be put to use serving the Emperor in some way. In the meanwhile the nobles achieve little with their existence and Kasia has other plans for Ciang who she sees as being better than all of them. In the story, Kasia engineers a scheme where Ciang is cast out and freed from this existence but at the expense of Kasia’s own life.

Considering I don’t know the characters, it’s an involving short tale and hints at a much deeper world behind it which is no doubt what we all are wanting in Shroud of the Avatar. I’m sure the story would mean far more to a fan of the series but it’s a promising start nonetheless. The question that remains is whether the game is any good which I intend to find out next. The links to Origin are tenuous to say the least but I love adventure games and this is one I’ve still to play so I don’t need much excuse.