It’s been a while coming but I finished Wing Commander 3 once again last night and for the first time on a 3DO. At the end of part 1, I was starting to find some of the missions quite difficult. The difficulty eased off quickly afterwards as I began to get the hang of this version. The mission with the bioweapon destruction followed by the optional rescuing Flint was possibly the last I really struggled on and I ended up letting Cobra do the rescue for me. Unlike the PC version, you have to play both missions again in full if you mess up in part 2.

The biggest adjustment I had to make for the 3DO was due to the lack of any real warning if a missile is locked on. There is no audio cue and the only indication is the lock light on the ships HUD. This is in different places for different ships and not all that noticeable. A key part to success is getting used to keeping an eye on this all the time and I think it’s the main problem I was having in early missions. A warning siren would have been welcome.

Another oddity was that the aiming cursor was entirely inaccurate remaining stuck around the bottom of the targeting rectangle. I can’t believe this bug wasn’t spotted so I’m wondering if it’s something that behaved differently on different 3DO systems. This meant aiming the old-fashioned way but I kind of liked that. I think the WC2 approach with only some ships having the aiming guide had a lot to be said for it.

It’s hard to know where to start in describing the other differences as there are many of them. The missions have near enough all been changed even though they are still based around the same story and briefings. They continued to not always fit the FMV, such as where Rollins asks if he should call me Houdini when I return from a run of the mill kill everything mission where on the PC original I would have run into a booby trapped transport.

In terms of gameplay, I’d say there was less variety and strategy involved and more out and out blasting. It was easier to score kills and my guns and shields recharged significantly faster than I’m used to. There were larger numbers of enemies to balance all this so I wouldn’t say it made progress too simple – the difficulty was just about spot on. 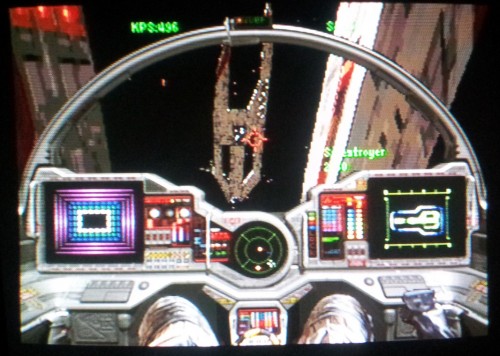 There were a couple more enemies I didn’t recognise in the shape of a gun turret which I didn’t manage a decent picture of and some Kilrathi super-carriers which I’m moderately sure are new (I may be corrected here) in the later missions. The gun platforms are just rectangular blocks that shoot at you. They don’t look like much but were considerably harder to take down than carriers in my experience as they are just about impossible to shoot without getting pounded by laser fire. 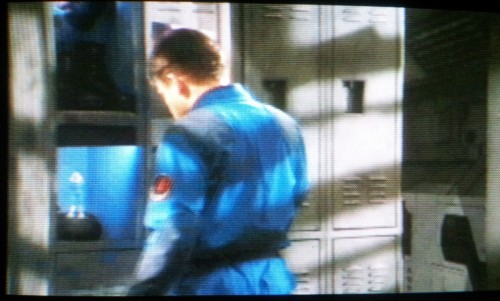 There were more extras in the FMV department with the famous Hobbes scene reinstated, an extra chat with Rachel and an extra few seconds in one of the scenes with Cobra. The pilots tended to have different taunts and communications in the cockpit – I wouldn’t say there were more as I soon got used to hearing the same phrases over and over but they weren’t the ones that have been ingrained in my brain from years of playing Wing Commander.

And of course there are the planet mission FMV’s which play when you would be flying the mission yourself on the original. These are nicely done but it does take some of the dramatic build up away at the end of the game when you just have to clear one waypoint to complete a mission before the FMV kicks in. The planet missions weren’t exactly a strong point on the PC but they added a bit of variety if your hardware was up to it.

In other differences there is no Longbow. My favourite WC ships are usually the bombers so I’m not keen on this change. Finally, in the final 3 missions I couldn’t choose to fly with no wingmen any more but they didn’t get arbitrarily killed off so the need to do so wasn’t there. Instead they just vanished before the final waypoint on mission 3. Speaking of that final waypoint, there didn’t appear to be any way to activate my cloak but it made no difference to the mission in this case. 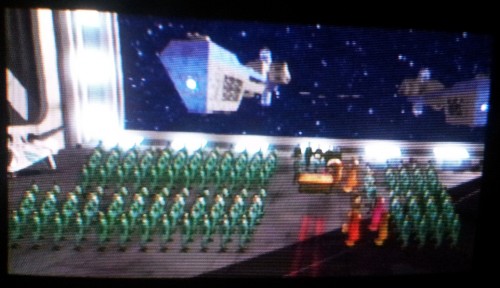 I really like this version and would recommend it to anyone with the hardware. It gives a good indication of how capable the 3DO was that it could do such a good job with a cutting edge PC game of the time. In the end, I think the gameplay was better on the PC and it remains my favourite but with the better visuals and sound on the 3DO it’s a close run contest. There is easily enough difference that any Wingnut owes it to themselves to play both.

I think it will be another game playthrough next up on here, possibly Ultima 5 on the NES although I’m not entirely looking forward to it. I’ll give another quick mention to Shroud Of The Avatar which is closing in on its funding goal right now. More or less all of the concerns I had with it have been addressed since the last post with a far more generous collectors tier with the game in the box, as well as confirmation of a DRM free offline version for Kickstarter backers who wish to play that way. I still don’t feel like I know too much about the game but I’m prepared to trust Richard Garriott and his team to turn out something I want to play.

I’ll plug another much smaller Kickstarter while I’m at it. From Bedrooms To Billions is a documentary feature film on the early UK game industry with loads of interviews from all the gaming pioneers over here back in the 80’s. On the Origin side of things this includes Martin Galway who was (and still is) famous for his SID music on the C64 and is currently plying his trade with Chris Roberts at Cloud Imperium. If you have money to burn, you can even get a boxed C64 signed by him in the rewards.