I’d be extremely surprised if there are many people who have even heard of this game but it’s been high on my wanted list for a long time now. It was the first game from Looking Glass founder and Ultima Underworld designer Paul Neurath who shared programming/design roles with Edward Lerner who would himself later work on Space Rogue & Terra Nova among many others.

Operation Copernicus was published by Sir-Tech rather than Origin in 1987 although Neurath had already done work for Origin as a playtester on Ogre. The game is a space sim/shooter with 3D filled polygons and was quite possibly the first game on a home computer with six degrees of movement to pull that off. It’s a clear predecessor to the later Space Rogue which featured a similar flight engine and added on Ultima 4/5 like RPG elements on tiled maps.

This isn’t exactly the easiest game to get hold of unless you want to pay the hefty price for the one copy that has been sat on Ebay for the last couple of years waiting for someone with too much cash to happen upon it. Ye Olde Infocomme Shoppe came through for me though so I relieved them of a copy and a pile of other goodies for roughly what the one game would have cost on Ebay. This one isn’t in quite as good condition mind you but I can live with it. 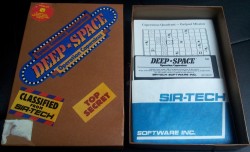 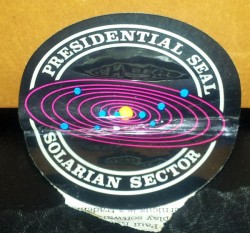 It’s an odd package with the game coming in a beige alligator skin effect cardboard box with several stickers glued to the top of it. The box is sealed with a further presidential seal sticker which originally had an A4 sheet stuck to it providing some screenshots and details for the back of the box. On outward appearances it doesn’t make the same sort of impression as a regular boxed game of the time would but at least it doesn’t have the guy in the leather jacket that was on Space Rogue.

The inner contents are equally unusual being a mashup of styles of document none of which quite prepared me for playing the game. There is a technical manual which has the details about gameplay (other than the keys) and a solar system map/reference card specific to the version with all the keys on it. The technical manual includes the aims of the game’s 4 missions which were left out of the game itself. 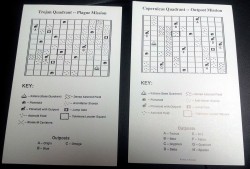 There are two sheets with quadrant maps on them (both doublesided) which give the maps for each of the missions. 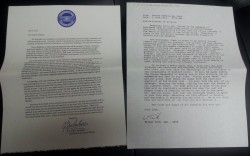 And finally a letter from the president and a sort of printed email message from the Terran Defense HQ providing the story for the game such as it is. In brief, the Hegemony of Andromeda has launched an unprovoked attack and I’m the only ship holding them off until humanity marshals their forces. The word hegemony immediately makes me think of Terra Nova but I doubt there is any deliberate link. 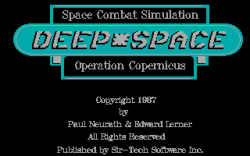 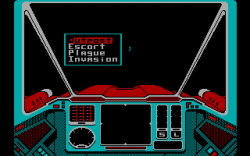 I toyed with whether to go for the C64 or DOS version of this game and ultimately went for DOS since it supports analog joysticks and runs a little smoother. It does mean a CGA colour palette however so there are downsides. On starting the game I get to choose which of the 4 missions I want to attempt and also which of 3 difficulty levels I’m going for (I stuck with novice). 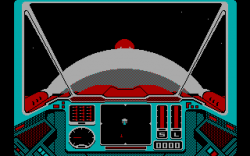 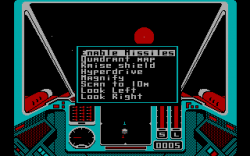 The first mission is called Outpost and involves collecting Ore from all of the human outposts in the system and ferrying it back to our base planet. I start out flying just above that planet in a view reminiscent of the planets aligning in 2001. The planets appear to be scaled sprites and look decent enough for a game this ancient. Pressing ESC brings up a command menu with the various options available. 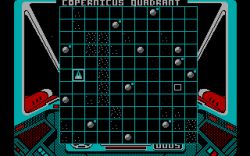 The most useful for this mission at least is the map which shows the entire quadrant and allows me to pick a hyperspace destination. Provided I’ve got the fuel I can hyperspace at any time but this eats up fuel which can only be replaced by landing on the base planet. It’s a little similar to Ultima 1’s space section except I can fly between sectors the long way if I wish here. The attacking hegemony are immediately apparent, taking the occasional potshot at me. For weapons I’ve got a choice between lasers which travel instantly but take ages to grind most opponents down or missiles which seem to kill anything in one hit but travel quite slowly and are limited in supply. There is no means to select a target and the 2D radar isn’t entirely helpful in a 3D world with much searching around still required to find enemies. The radar doesn’t even rotate but instead my ship is shown in the middle pointing in its relevant direction. The hitch here is that it only moves 90 degrees at a time. Lets just say the radar is at best a rough guide of where you need to go.

I don’t strictly speaking need to take on the enemies for this first mission although I do get pop up messages when an output is under attack. If I don’t go and help it, all their ore is stolen. I’ve mainly stuck to missiles for the combat since I get restocked each time I fly back to base. There isn’t much in the way of tactics needed for combat and the best tactic appears to be to get close and come to a halt. Each ship goes up in a small cloud of spinning triangles when destroyed. 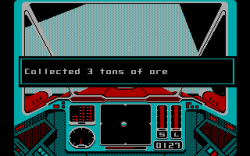 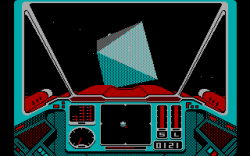 The game uses a Newtonian engine with extremely fast flight possible but a massive amount of momentum to lose when slowing down and turning. The PC joystick controls for this use the two fire buttons for speed up and slow down rather than weapons which seems like an unusual choice but once I get used to L and M for firing my two weapon types it all works. My goal is to fly to all the octahedral outpost stations, dock to get their ore and then fly back to base. On the C64 version, the stations have one side with a triangular entrance which I had to slowly approach and a little spaceman would appear just before docking. On the more powerful PC, this isn’t present and instead I just have to bump into the station at any angle to grab the ore. 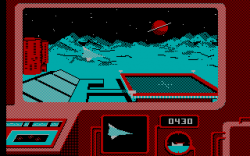 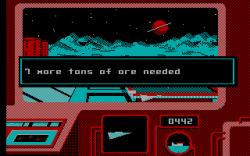 From here, it is back to base to deliver the cargo. Landing on a planet is more complex as I have to guide my ship down to the landing pad. This takes the unusual approach of showing the point of view of the landing tower and my ship flying around in 3D over the 2D backdrop. The fixed viewpoint can mean reversed controls depending on ship orientation but doesn’t prove to be as hard as it sounds as I can literally nose dive into the landing platform for a safe landing. 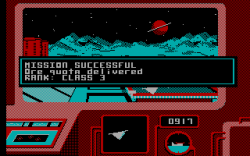 Several trips later, I retrieve all the ore completing the mission. I’m “rewarded” with a ranking of 3 (1 is the best, 8 the worst) and then dumped straight back to DOS to load up again if I want to try another of the missions. There was talk on the reference card of increased rewards for good enough performances. Class 3 wasn’t too bad and there wasn’t any reward that I could see so I’m not hopeful on this front. I’ll be trying the other 3 missions in later posts anyway.

From what I’ve seen so far this is an extremely quirky little game that is kind of fun but extremely basic compared to what was to come later. Elite on the BBC Master arguably played better than this but they are quite similar in combat mechanics. DSOC certainly has the better looks with its filled polygons and has extra features like sprite rendered asteroids to fly through just like Wing Commander from a few years later (except these are perfectly spherical and don’t rotate). It’s a game that has some character at any rate and I’m certainly intrigued about the rest of the it although with only the 4 missions it is going to be short-lived. I’ll be upping the difficulty level to intermediate for the next mission, Escort.